Accessibility links
Irate Teachers Skip Class Across Kentucky To Protest Surprise Pension Overhaul : The Two-Way What began as a bill about sewage services quickly became a significant change to state employee benefits Thursday. Now, it is one signature from becoming law — and classrooms are closing in protest. 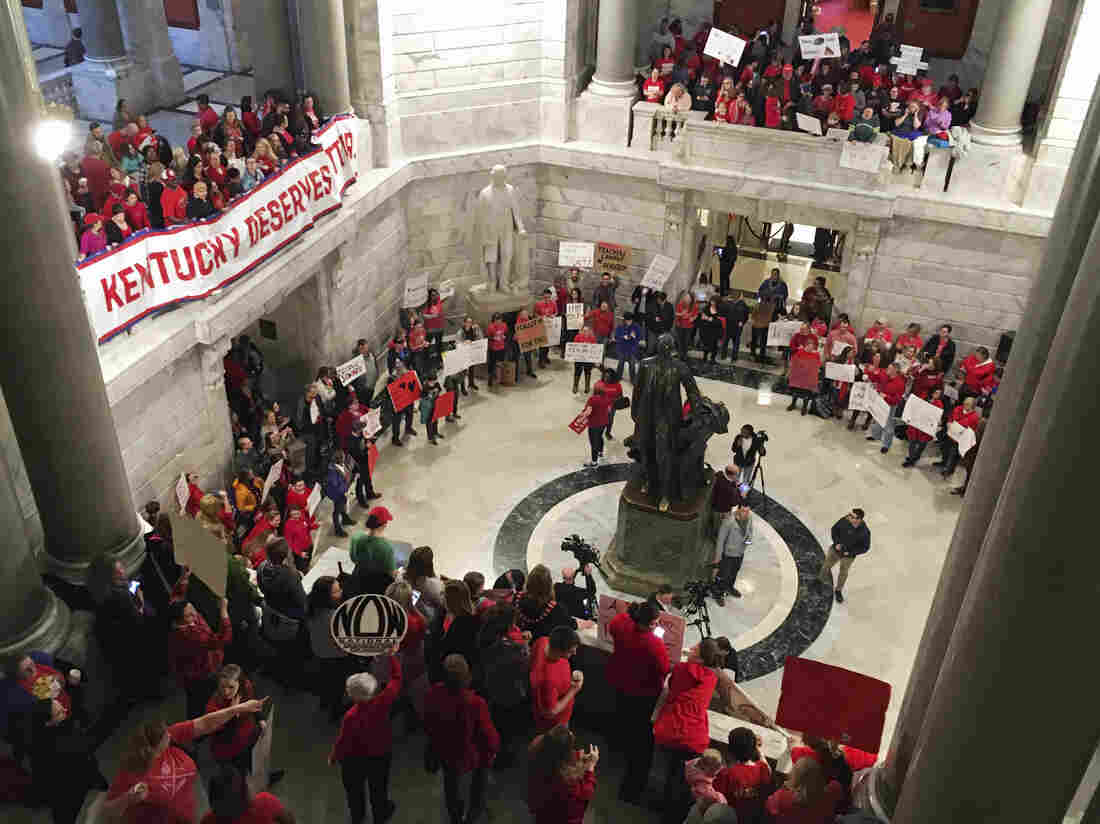 Hundreds of Kentucky teachers protest outside Gov. Matt Bevin's office Friday in Frankfort, Ky. They crowded into the building, shouting "Vote them out," less than a day after lawmakers quickly passed a surprise overhaul of state employee retirement benefits. Adam Beam/AP hide caption 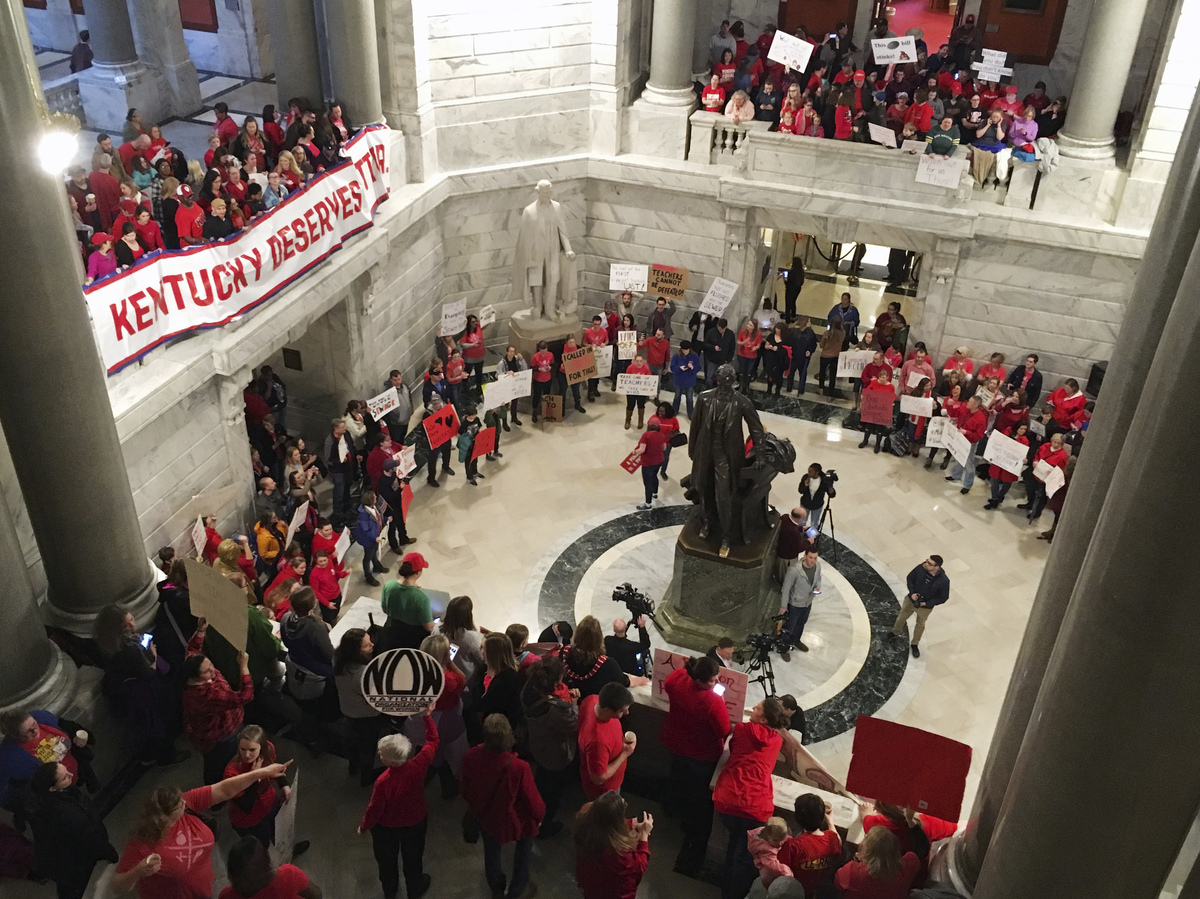 Hundreds of Kentucky teachers protest outside Gov. Matt Bevin's office Friday in Frankfort, Ky. They crowded into the building, shouting "Vote them out," less than a day after lawmakers quickly passed a surprise overhaul of state employee retirement benefits.

As of Thursday morning, SB 151 was a bill about sewage services.

But by the time both chambers of the Kentucky Legislature had passed it that night, the amendment process had turned the bill about sewage into a 291-page overhaul of public employees' retirement benefits. Now, it rests on Gov. Matt Bevin's desk awaiting his signature — and teachers across the state are livid.

Even before the state Senate passed the bill Thursday night, teachers and other school staff had descended on the Capitol in Frankfort, bearing signs and belting chants in protest of the fast-moving legislation. Still more protesters arrived in the capital Friday, and thousands of others called off work — so many, in fact, that schools in roughly two dozen counties shuttered their classrooms.

"This has been a difficult evening for all of us in education," Madison County Public Schools, one of the state's largest districts, said on Facebook on Thursday night. "We share a passion for our students and for their futures that is unmatched and unwavering. Tonight we have to balance that passion with the need to stand in solidarity with others in our profession across this state."

Then, in all caps, the post announced there would be "NO SCHOOL" Friday.

At issue, specifically, are state employees' pensions. Ryland Barton of member station Kentucky Public Radio broke down some of the major changes included in the bill. You can find that summary in the text inset below or read the bill for yourself.

"New teachers would instead receive cash-balance retirement plans that would invest retirement contributions from employees and the state, and guarantee that the plans wouldn't lose money during a stock market crash.

"The bill would also cap the amount of sick leave that teachers can accrue for retirement purposes as of Dec. 31, 2018.

"State workers hired since Jan. 1, 2014 already receive cash-balance plans, but would no longer receive a guaranteed 4 percent return on their retirement savings.

"The bill would require state employees hired between July 1, 2003 and Sept 1, 2008 to contribute 1 percent of their salaries to pay for retiree health.

"The bill would also require the state to put massive infusions into the pension plans over the next 30 years. This year alone, lawmakers have proposed putting $3.3 billion into the systems — about 15 percent of the two-year state budget."

The Republicans who passed the bill on a party-line vote see the changes as a difficult but necessary attempt to tackle the state's estimated $41 billion shortfall when it comes to paying out retirement benefits over the next three decades. The bill's sponsor asserted it will save Kentucky about $300 million over that span — a small fraction of the deficit the state faces.

But even that estimate remains in question. The bill was passed before a standard actuarial review to see how much, if any, money it would save the state.

Kentucky's Democratic attorney general, Andy Beshear, listed this skipped step as one of the reasons he plans to sue if Bevin signs the bill into law.

"Last night, we saw government at its worst. When the leadership of the House and Senate, in the dark of night, amended what was supposed to be a sewage bill into what they claim is pension reform," Beshear said in a video statement posted to Twitter on Friday. "They plopped a 291-page bill in front of legislators and made them vote on it without reading it."

"We are terribly upset," Albright told the Lexington Herald-Leader, protesters around her shouted, "We've had enough." "Our government is mismanaged and ill-informed."

Albright and her fellow protesters in Kentucky are not the only teachers locked in a struggle with their state government. Just weeks after a protracted standoff between lawmakers and educators in West Virginia — which ended in educators receiving a 5 percent pay increase — similar disputes are reaching a boil in Oklahoma and Arizona, as well.

The Oklahoma Education Association and the Oklahoma Public Employees Association have pledged a walkout next week for pay raises and greater state revenue.

GOP State Rep. John "Bam" Carney, a teacher himself, made clear in a passionate speech from the floor that he was not impressed with the protests.

"We have had grandchildren of members of this body come home crying from public schools because teachers are talking about their grandparents while they're at school," he shouted. "I say, do your job, don't talk about politics, and teach the kids!"

Bevin, for his part, has signaled that he intends to sign the bill despite the protests.

"Tonight 49 members of the Kentucky House and 22 members of the Kentucky Senate voted not to keep kicking the pension problem down the road," Bevin tweeted after the bill passed Thursday night. "Anyone who will receive a retirement check in the years ahead owes a deep debt of gratitude to these 71 men & women who did the right thing."