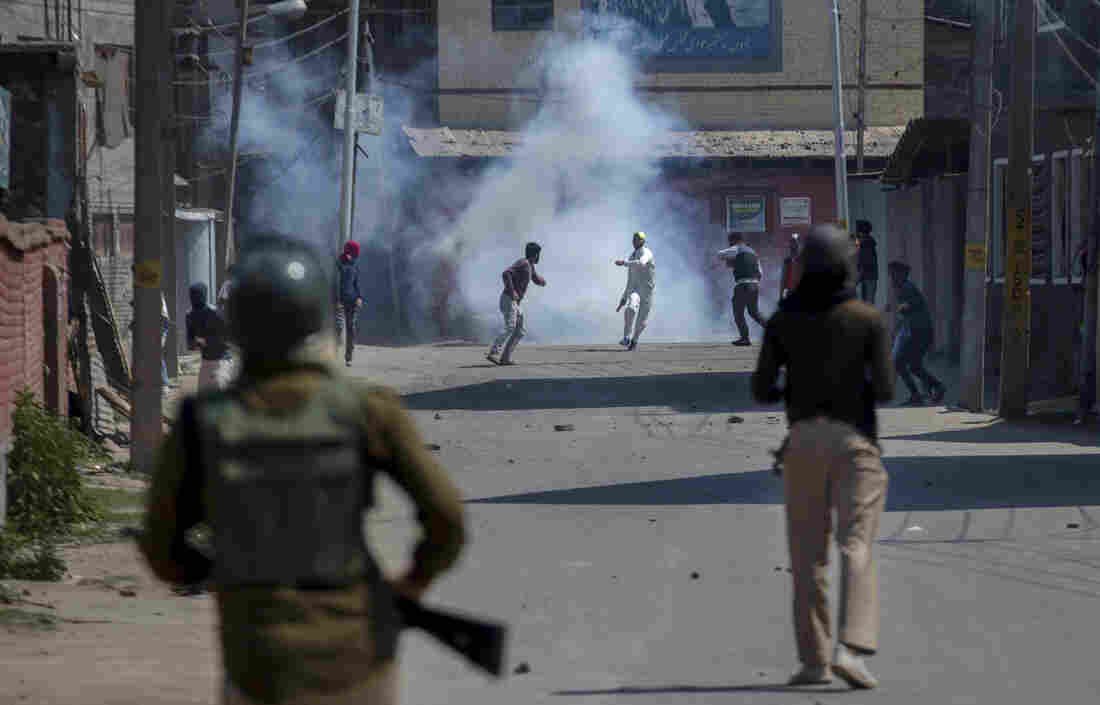 Kashmiri protesters engulfed in tear-gas face down Indian paramilitary troops during a demonstration Sunday against the killing of rebels in Srinagar, in Indian-administered Kashmir. Dar Yasin/AP hide caption 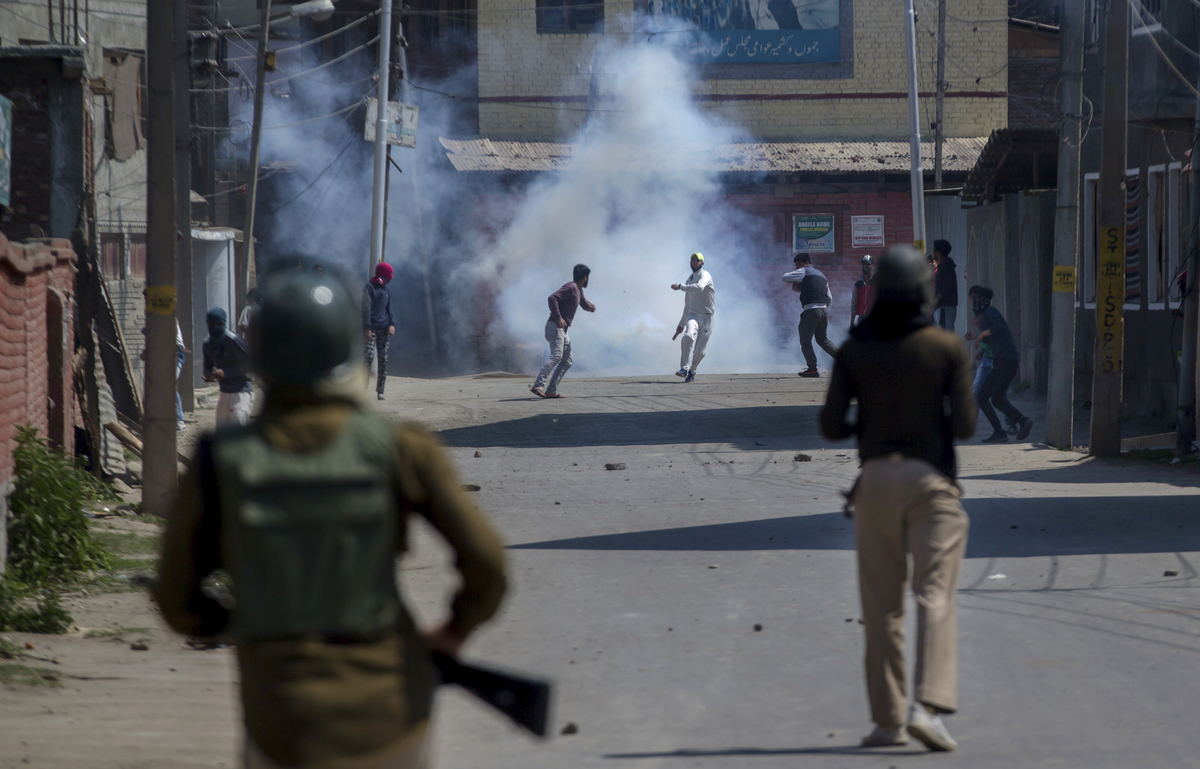 Kashmiri protesters engulfed in tear-gas face down Indian paramilitary troops during a demonstration Sunday against the killing of rebels in Srinagar, in Indian-administered Kashmir.

Shopfronts stood shuttered and classrooms sat empty in towns across Indian-administered Kashmir on Monday, just one day after a spasm of bloodshed killed at least 20 people, four of whom were civilians. Separatist leaders called for a general strike in protest, even as Indian security forces sought to subdue the unrest by cutting Internet access in some areas and patrolling streets in riot gear.

The relative — and heavily enforced — quiet in the disputed Himalayan region follows a weekend of havoc. The chaos opened overnight Saturday with Indian raids against suspected separatist insurgents in three southern Kashmiri villages and eventually witnessed tens of thousands of protesters chanting slogans against Indian rule.

In the intervening hours, multiple gun battles left at least three soldiers and at least 13 suspected militants dead. Clashes between Indian forces and Kashmiri protesters also left civilians dead and dozens of others injured — including at the sites of the raids, where some protesters threw rocks at the troops in apparent support for the militants.

"It's unfortunate that stone pelting around encounter site cost 4 civilian deaths," Shesh Paul Vaid, the local police chief, tweeted Sunday about the "encounter." The Indian Army's Northern Command, for its part, commemorated the loss of the three soldiers.

Ultimately, Indian Lt. Gen. A.K. Bhatt told The New York Times the operation was a success: "It is a special day for our forces," he said.

#ArmyCdrNC and all ranks salute the supreme sacrifice of our brave soldiers & offer deepest condolences to their families @adgpi @PIB_India @SpokespersonMoD pic.twitter.com/2RSj42YEqZ

But The Associated Press, citing local residents, reports that Indian troops also live ammunition on some groups of civilian protesters.

"On Sunday, doctors treated and operated on over 50 young men brought to the hospital, most of them hit in the eyes by pellets," the wire service notes. "A doctor said about 30 could lose their eyesight."

"The forces are targeting everyone whether a protester or not," a local mother told Al Jazeera at a hospital in Kashmir's main city, Srinagar. "My son was hit with pellets on the left eye and the doctors are not sure if he can get back his full vision. It pains me to see all these young boys here like this in the ward struggling to see."

As NPR's Julie McCarthy reported in 2016, the practice of firing pellets as a means of crowd control has been a frequent practice of Indian security personnel in the area — and has attracted condemnation in the past, as well. Julie reported that Central Reserve Police Force had fired 1.3 million pellets in the span of a month, and that over the course of two months that year a single hospital had treated at least 700 people with serious eye injuries from pellets.

It was a bloody weekend in a region that has long been no stranger to bloodshed.

Since the 1947 Partition that created independent India and Pakistan, the Kashmir region has been a source of bitter dispute, and at times, war between the two countries, both of whom claim it in its entirety. These days, Kashmir lies divided between the two countries, with each administering its own portion. (After a 1962 border war with India, China also claimed a small section.)

Since the late 1980s, when the modern separatist movement took shape, tens of thousands of people have died in Kashmir's frequent fighting.

In 2016, those simmering tensions were inflamed once more with the killing of Burhan Wani, the charismatic young leader of one of the region's separatist militias. Wani's death, celebrated by Indian authorities as the "biggest success against militants" in recent years, helped galvanize armed separatist groups to redouble their campaign against Indian authorities.

On Monday, Pakistani leaders lent their voices in support of the protesters in Kashmir — and in condemnation of the Indian security forces. The country's prime minister, foreign minister and commander of its armed forces — among others — all denounced the violence.

"Indian forces have crossed the limits of brutality due to which human rights are being violated," the country's federal government announced Monday on Twitter.

Government of Pakistan strongly condemns the brutal use of force by India in Indian Occupied #Kashmir. Indian forces have crossed the limits of brutality due to which human rights are being violated.#KashmirBleeds #Kashmiris pic.twitter.com/jyNtvGbzCo

Pakistani Prime Minister Shahid Khaqan Abbasi convened a special meeting of his Cabinet on Monday "to review the current situation arising from the recent Indian brutalities." At the meeting, the group formally adopted a resolution that condemned the actions of the Indian security forces and requested U.N. intervention, including a fact-finding mission by the Office of the High Commissioner for Human Rights.

It also declared this coming Friday to be Kashmir Solidarity Day.

The Indian police force in Kashmir, for its part, asked on Twitter for residents "not to fall prey to any speculations and #rumors which are intended to disturb #peace."