Accessibility links
One Week And Counting: Howard University Student Protesters Still Aren't Budging : The Two-Way It has become the longest protest ever at the historically black university and still the school's president has ignored calls to resign following a financial aid scandal. 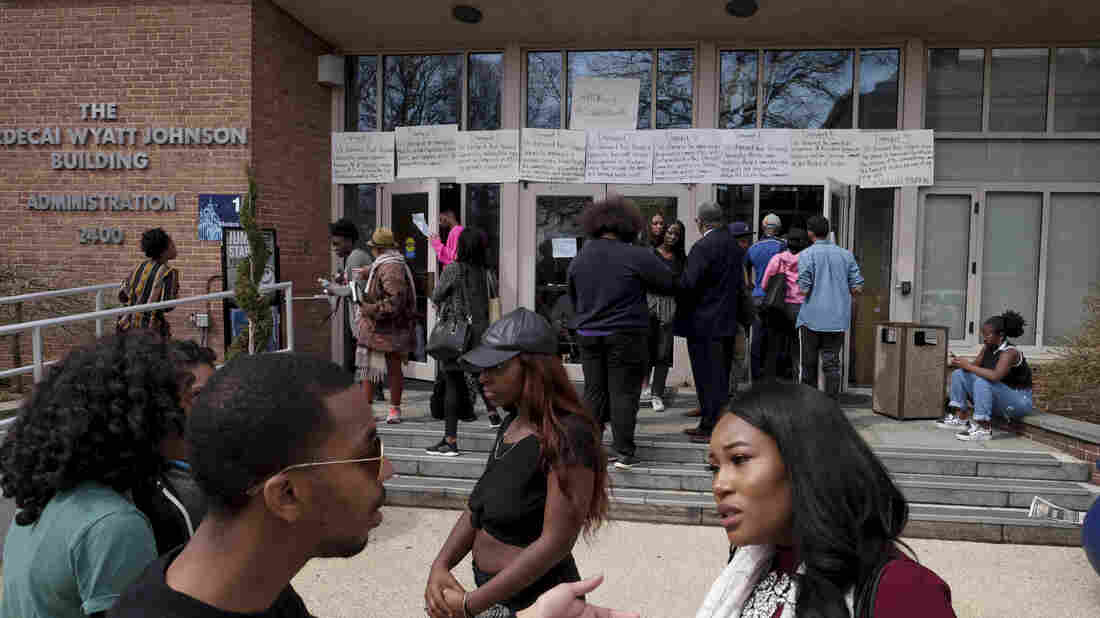 People gather outside the Mordecai Wyatt Johnson Building in Washington D.C., during a sit-in at Howard University last week. By Thursday the students were entering their second week of protest and say they won't move until they are satisfied. The Washington Post/The Washington Post/Getty Images hide caption 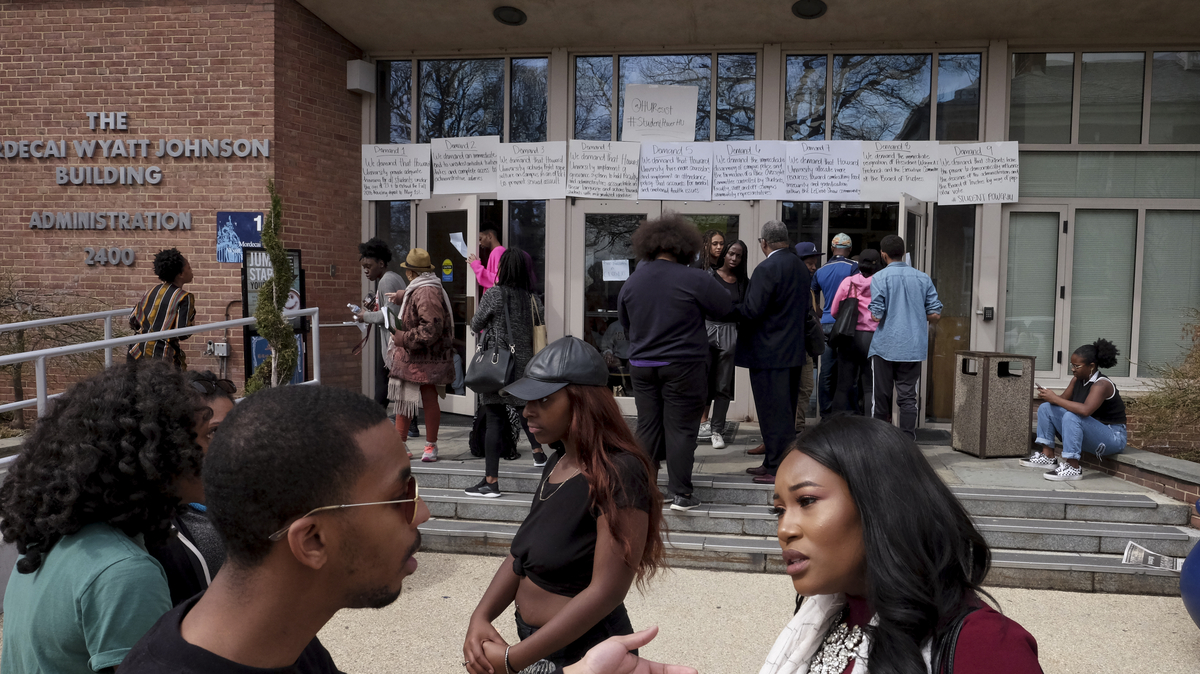 People gather outside the Mordecai Wyatt Johnson Building in Washington D.C., during a sit-in at Howard University last week. By Thursday the students were entering their second week of protest and say they won't move until they are satisfied.

Student protesters in Washington, D.C., entered their eighth day of occupying Howard University's administration building on Thursday, and while school officials have shown signs of bending to their demands, the students say it is not enough.

Student group HU Resist is spearheading the protest and collated a list of nine demands that might resonate on campuses across the country, such as: affordable housing, an end to "unsubstantiated tuition hikes," and greater focus on student safety, including mental health issues and preventing sexual assault.

"We've come to somewhat of an agreement on seven" of the demands, Alexis McKenney, a senior political science major and student protest leader, said at a press conference Wednesday, although she declined to be specific.

Protesters issued their list of demands on Sunday, March 25 and by Thursday they were occupying the administration building in what they say is now the longest demonstration in Howard University's history.

The sit-in began one day after the university came under fire for a financial aid scandal.

Demonstrators are calling for greater student empowerment when it comes to school leadership and they want students to "democratically influence" the administration and the board of trustees "by way of popular vote."

McKenney said students' desired role on the board has been a snag in negotiations, but remains an important point for the protesters, "for the sake of figuring out what this institution is going to look like moving forward."

She added that the refusal of University President Dr. Wayne A.I. Frederick to step down has been another sticking point.

Protesters are calling on Frederick as well as board leadership to resign.

On Wednesday, Mar. 28, Frederick issued a statement conceding that in late 2016 he was alerted to possible misappropriation of financial aid funds; an audit completed last spring confirmed it.

Frederick said six employees had been fired in the wake of the scandal.

But student organizers say there is a wider culture of "administrative negligence" and are seeking to transform the historically black university "into a democratic, Black University that acts as a safe-haven for all Black students."

Protesters want campus police officers to be disarmed, saying they "cannot afford to wait until a tragedy occurs."

"If the University truly respects the value of Black life, it must take a preventative approach to police violence," reads one of the demands.

Organizers have turned to social media to amplify their calls for change and also harness support from sympathizers.

“We really must think about what side of history we’re gonna be on in the present. Talking about the spirit of Martin Luther King, do you have a dream, do you have a vision? We are creating the vision of future Howard.” #StudentPowerHU ✊🏾❤️ pic.twitter.com/HMhU6qQUcD

The sit-in echoes a protest from the pre-social media era that shut down Howard University's campus 50 years ago.

In March 1968, Howard students also occupied the administration building in a massive multi-day sit-in that ended when school officials showed a willingness to concede to some demands, including emphasizing African American studies. (Then-Howard President James Nabrit did not heed students calls to step down.)

Maya McCollum, an 18-year-old journalism major from Atlanta, has been helping coordinate coverage of the current sit-in and says the school's rich protest history has provided inspiration.

"It made me realize that the issues at Howard aren't just individual issues, they're systematic issues that have lasted for years and there has to be something to make them change," she told CNN.

Meantime, the Howard University Alumni Association has voiced its support for Frederick as well as the board, while also imploring the administration to listen to students.

"When we see student protests, we know it is an indication that their voices are not being heard," the alumni association said in a statement. "It is important that the University address the issues brought by students and we implore the students to understand the power of their position and the position of leadership."

In a statement Wednesday, HU Resist said they are continuing to negotiate with board members and are "prepared to occupy the administration building until the completion of the negotiations process."

"It's not just an issue around the president because presidents come and go," said Jade Agudosi, a senior and president of the Howard University Student Association. "But what we're trying to do is make institutional changes that will last far beyond our time at Howard."