Accessibility links
CDC Epidemiologist Found Dead Weeks After Going Missing, Drowning Suspected : The Two-Way The body of Timothy Cunningham was found near his Atlanta home in a rugged area that was difficult to access. While there were no signs of foul play, police say questions remain unanswered. 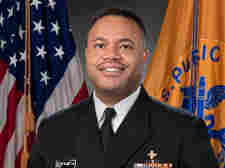 Police said the body of CDC epidemiologist Timothy Cunningham was found along the banks of an Atlanta river seven weeks after he vanished. Foul play is not suspected, but questions remain unanswered. Centers for Disease Control and Prevention hide caption

Timothy Cunningham, a 35-year-old epidemiologist at the Centers For Disease Control and Prevention, vanished after leaving work Feb. 12, complaining he felt unwell; some seven weeks later, his decomposed body was spotted by fishermen in a rugged area along the banks of the Atlanta area's Chattahoochee River, according to officials.

"We have no indication of foul play," Maj. Michael O'Connor with the Atlanta Police Department said at a press conference Thursday.

Fulton County Medical Examiner Jan Gorniak said the cause of death is "probably" drowning. But tests, including a toxicology screening, are still pending.

Gorniak added that the condition of Cunningham's body is "consistent" with having been in the water since the day he went missing and that there were no signs of trauma or underlying medical conditions.

Officials said Cunningham's body was recovered Tuesday evening. Since his disappearance, Cunningham's friends, family and CDC co-workers had been questioned and a $10,000 reward offered.

And yet many questions remain unanswered.

Police do not know, for example, how Cunningham's body got onto the banks of the river.

The area — not far from Cunningham's home — was inaccessible by walking, police said, noting they struggled to find a place to launch a boat to reach his remains.

"We do know that he was a jogger and he was wearing his favorite jogging shoes at the time that he was found," O'Connor said. "I can't tell you that he was jogging, but those two things together seem to indicate that that's a possibility."

O'Connor said three crystals were in his pocket for unknown reasons, although Cunningham was an avid rock collector.

In the days after he went missing, Cunningham's case drew intense media scrutiny and speculation about what had happened in what police called "unusual" circumstances.

On the morning he went missing, his supervisor at the CDC talked to him about why he had been passed over for a promotion, according to police.

The CDC later issued a statement denying Cunningham did not receive a promotion and pointing out that he had been promoted to commander in the U.S. Public Health Service.

But Atlanta police doubled down, issuing a statement saying it stood by what it said about Cunningham's employment and that it had gotten the information from the CDC, reports The Atlanta Journal-Constitution.

When he left work later in the day, it was the last time he was known to have been seen alive. All of his belongings — including wallet, keys and passport — were found inside his Atlanta home.

According to The New York Times, his family said that their last phone conversations with Cunningham had left them worried and that "he sounded not like himself."

By outward appearances, Cunningham seemed to have a successful career.

He received his master's and doctoral degrees from Harvard's school of public health.

His CDC biography says he was a "team lead" with the Division of Population Health and had deployed for several public health emergencies "including Superstorm Sandy, Ebola, and Zika."

Last year, Cunningham was quoted in an NPR report about the death rate declining among black Americans.

"The major drivers of this are decreases in many of the leading causes of death, such as heart disease, cancer and stroke," Cunningham told NPR's Rob Stein. Cunningham stressed, however, that as a group, black Americans still have an overall life expectancy that is four years shorter than white Americans.

"Many younger African-Americans in their 20s, 30s and 40s are living and dying with chronic conditions that we more typically see in the older population," Cunningham told Stein. "There's still work to do."

On Thursday, O'Connor said the circumstances around Cunningham's own death may never be understood.

"Barring new information coming forward, we may never be able to tell you how he got into the river."