Accessibility links
Lula Da Silva, Brazil's Beloved Ex-President, Surrenders After Standoff : The Two-Way On Saturday, supporters chanted "Resist!" as they surrounded a union headquarters where Lula holed up in his last hours of freedom. He's been sentenced to 12 years in prison over corruption charges. 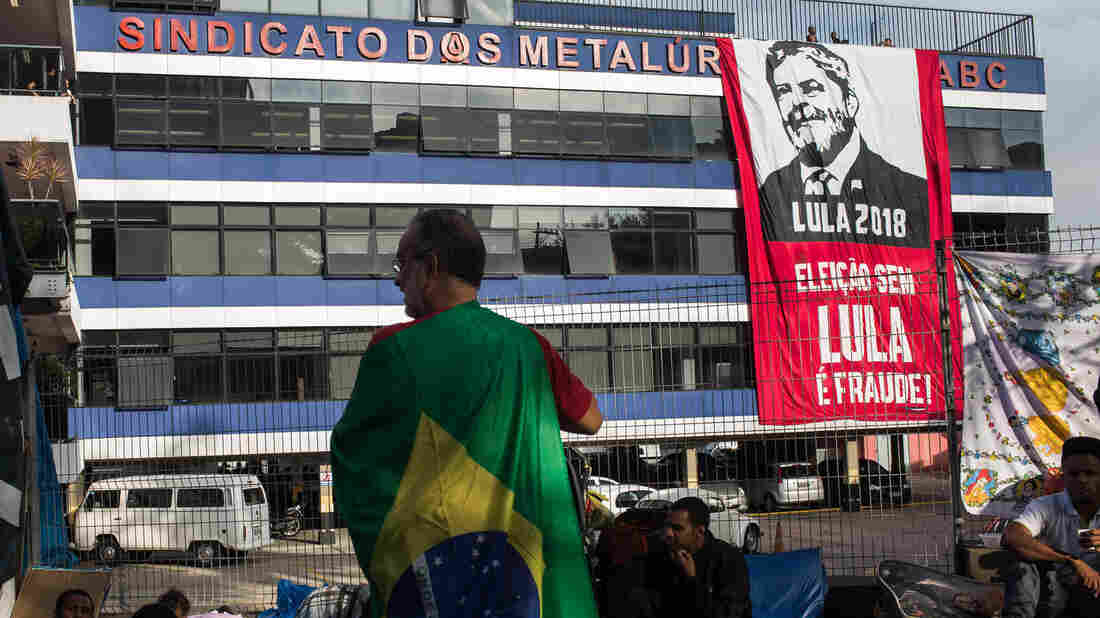 A supporter of former President Luiz Inacio Lula da Silva waits in front of the building where Lula holed up after defying a court order to turn himself in. Victor Moriyama/Getty Images hide caption 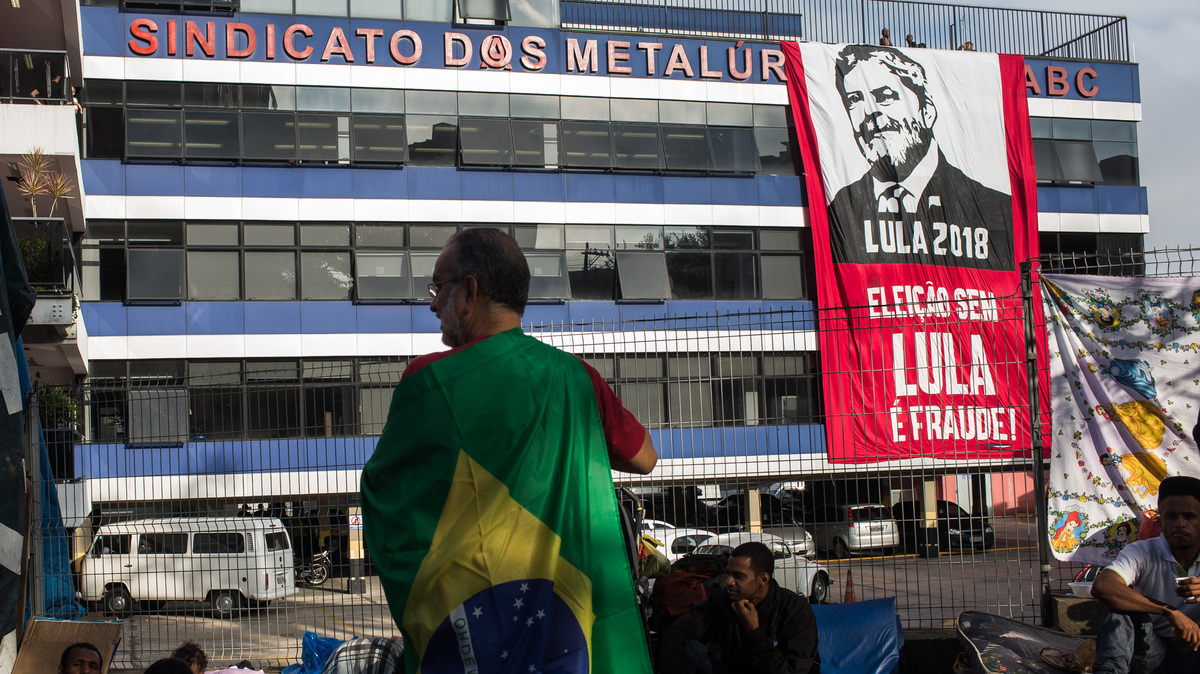 A supporter of former President Luiz Inacio Lula da Silva waits in front of the building where Lula holed up after defying a court order to turn himself in.

Luiz Inácio Lula Da Silva, the hugely popular former president of Brazil who has been ordered to begin serving a 12-year prison sentence for corruption, has surrendered to Brazilian authorities.

In the hours preceding his incarceration, crowds of supporters blocked the exit to the Metalworkers' Union headquarters building that Lula had been holed up in.

"There is no use in trying to stop me," Lula wrote on Twitter. "I'll come out of this bigger, stronger, more truthful and innocent."

A judge had ordered Lula to turn himself in by 4 p.m. ET Friday in the city of Curitiba. Instead, Lula decamped to the union headquarters in his hometown outside of São Paolo, several hundred miles away.

Lula spent Friday night and the beginning of Saturday hiding out in the building. He briefly went outside Saturday morning to attend a mass commemorating his late wife's 68th birthday. Speaking with Weekend Edition, NPR's Philip Reeves described it as both a religious and a political event. Lula climbed on top of a bus and signaled to supporters, many of whom chanted, "Resist!" or "Don't turn yourself in."

It's the latest turn in a political drama riveting Brazil in the months before it holds presidential elections, pitting a hugely popular former president against a celebrity judge known for prosecuting powerful politicians and business executives.

Massive crowds of supporters have held vigil outside of the building, chanting and waving flags. Lula tweeted support for them during his time at the union headquarters building.

"We will remain here the time that is required," one supporter, Sueli Silva, told Philip. "We won't leave."

Lula Defies Order To Turn Himself In

Lula's legal saga began last summer, when he was convicted on corruption and money laundering charges over a kickback scheme that illegally gave Lula more than $1 million. He appealed, including a trip to the Supreme Court, but last week an appeals court ruled the 72-year-old must begin serving his 12-year prison sentence.

Sérgio Moro, the judge who found Lula guilty, has become a celebrity because of his aggressive prosecution of Brazilian political and business leaders tied to corruption, as Philip has reported. Operation Car Wash, as the investigation is known, netted former senators, a former finance minister and the owner of Brazil's biggest construction company, among others.

"We will never surrender to corruption," Moro said in October when Notre Dame University presented him with its Notre Dame Award — one of several times he's received international attention.

"The age of our robber barons is ending," he said. 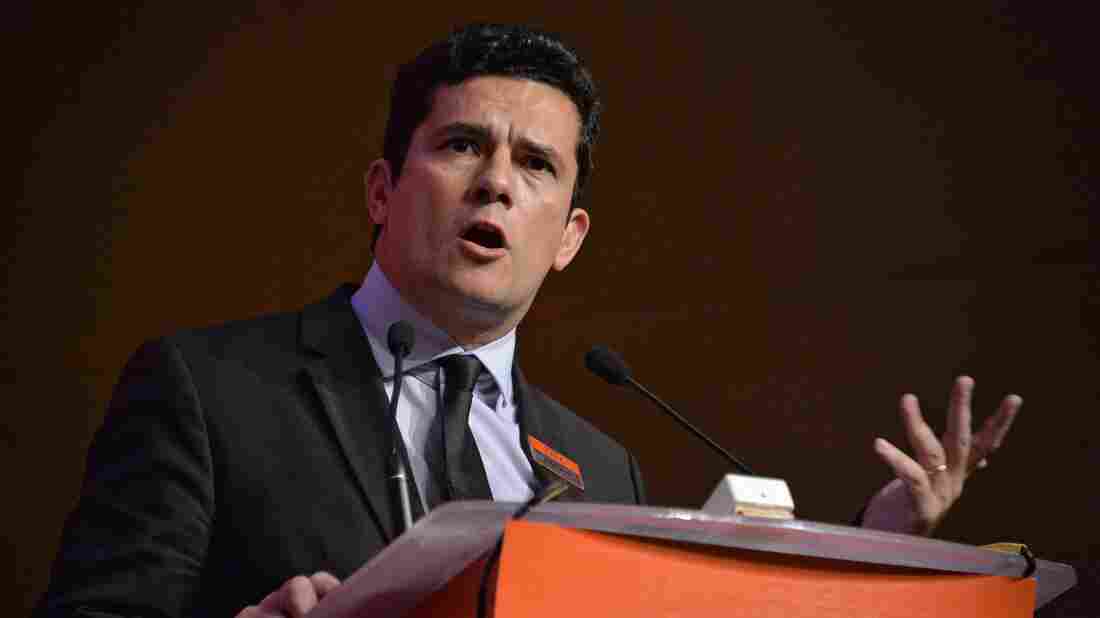 Brazilian judge Sergio Moro speaks during a business meeting in Sept. 2015. Moro has become a celebrity because of his prosecution of politicians over corruption scandals. NELSON ALMEIDA/AFP/Getty Images hide caption 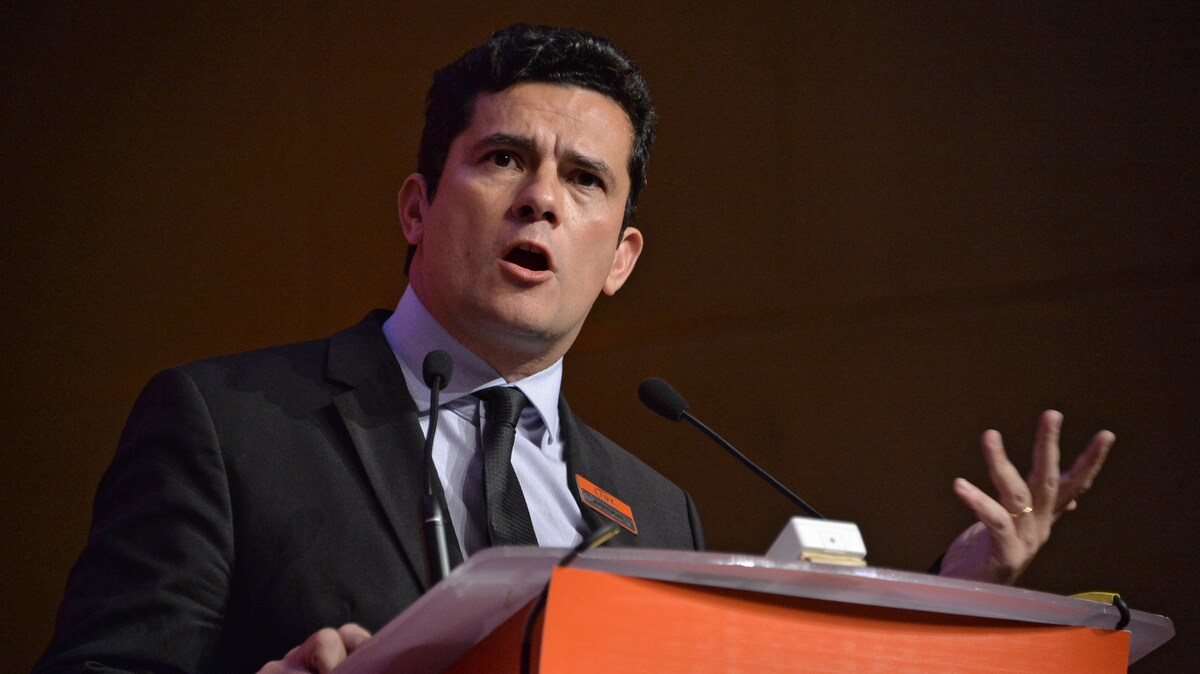 Brazilian judge Sergio Moro speaks during a business meeting in Sept. 2015. Moro has become a celebrity because of his prosecution of politicians over corruption scandals.

But of the prominent people Moro has prosecuted, none has as large a profile as Lula Da Silva, who left office at the end of 2010 with an approval rating above 80 percent. Many Brazilians credit him with sparking economic growth that lifted millions out of poverty.

And even though he's now barred from running for the presidency, Lula is seen as a likely favorite if he ran again in Brazil's October election. Last month a poll predicted he would win after a runoff, Reuters reports.

Some pollsters also ask voters about their opinion of Moro as a presidential candidate, although he denies he'll run.

"They're wasting their time — not going to happen," he says.