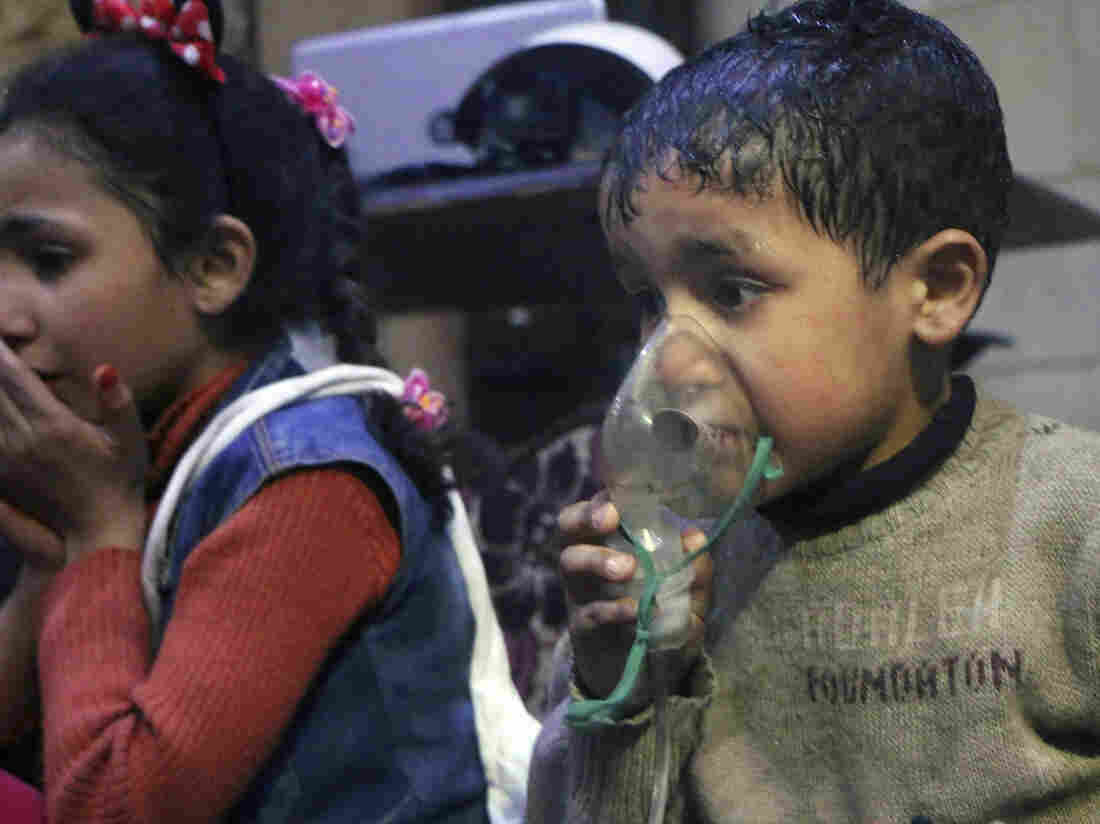 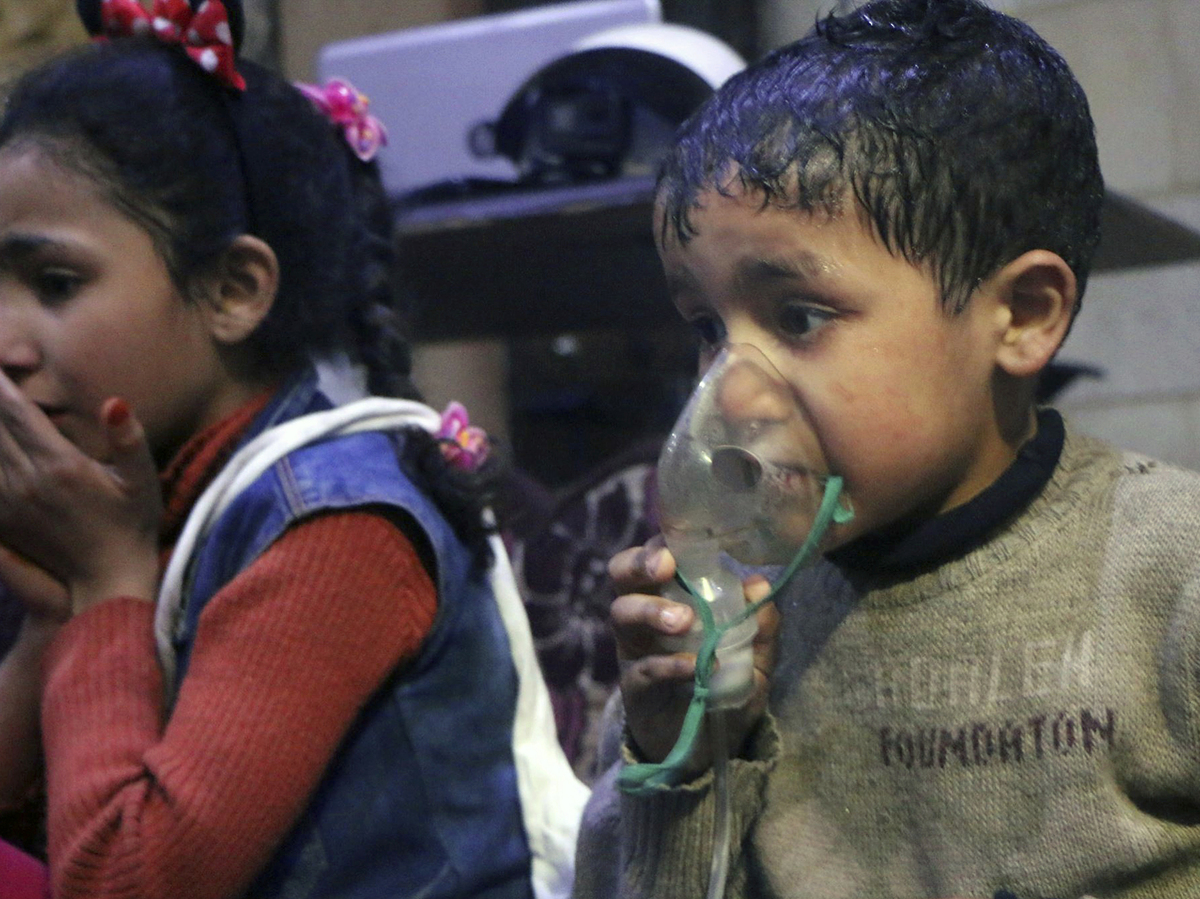 Amid international outcry over an alleged poison gas attack in Syria over the weekend, Damascus said one of its air bases had come under attack, first blaming the U.S., but later Israel.

Meanwhile, President Trump says the White House will be making a decision on Syria in the next day or two, saying the reported attack was "atrocious" and "can't be allowed to happen."

"If it's the Russians, if it's Syria, if it's Iran, if it's all of them together, we'll figure it out," the president said during his Cabinet meeting, according to pool reports.

Trump spoke hours after Syria and Russia accused Israel of carrying out the predawn raid on the Tiyas air base — also known as T-4, outside Palmyra in central Syria. Syria called the attack "Israeli aggression."

Initially, Syria had said the U.S. "likely" carried out the airstrike but then quickly shifted the blame to Israel. The Pentagon said it was not conducting military operations in the area.

Russia's Defense Ministry said Israeli F-15s fired eight missiles at the air base and the Britain-based Syrian Observatory for Human Rights said 14 people were killed in the attack. Moscow, an ally of the Syrian regime, said no Russians were wounded in the attack.

Israeli officials have declined to comment, but Israel conducted a similar airstrike on the base on Feb. 10.

How Trump Administration Will Respond To Syria Chemical Attack

Meanwhile, NPR's Ruth Sherlock reports from Beirut that Jaish al-Islam, the last rebel group left in the eastern Ghouta suburbs of Damascus, appears to have agreed to a surrender deal with the regime and its ally, Russia.

"Buses are taking fighters and their families to the northern town of Jarablous, which is in rebel hands. But in a twist from past evacuations, we're told that fighters can stay in Douma if they choose to, though they must give up their weapons," Ruth says.

President Trump tweeted on Sunday that there would be a "big price to pay" for the Syrian chemical attack in Douma, the last section of the Eastern Ghouta suburbs near Damascus that Syrian rebels still hold.

In an unprecedented move for Trump, he singled out Russia and its president, Vladimir Putin, for backing the regime of Syrian President Bashar Assad.

The United Nations Security Council also planned to hold an emergency meeting on the chemical attack on Monday, but with Russia holding a veto over any action, it was unlikely that anything substantive would emerge.

Damascus and Moscow have called the alleged chemical attack a fabrication despite independently confirmed reports that the Syrian regime used deadly Sarin gas in 2013 and again last year.

In the latest alleged attack, doctors said people arriving at hospitals in Syria following the attack showed symptoms of chlorine gas poisoning. Chlorine gas was first used as a battlefield weapon in World War I.

"Hoaxes of attacks using chlorine or other poisonous substances by Syrian government forces are continuing to emerge. Another such hoax that has supposedly taken place is the alleged chemical attack in Douma yesterday," Russia's Foreign Ministry said in a statement over the weekend.

"It is necessary to warn once again that military intervention under far-fetched and fabricated pretexts in Syria, where the Russian servicemen are deployed at the request of the legitimate government, is absolutely unacceptable and might lead to very severe consequences," the statement said.

As NPR's Alexis Diao wrote on Sunday, "Photos circulating on social media show lifeless bodies piled in basements. The Syrian Observatory for Human Rights, a monitoring agency, says that at least 80 people have died, but these reports cannot be independently verified."

A joint statement released Sunday by the Syrian Civil Defense and the Syrian American Medical Society, which supports clinics that serve rebels, said "more than 500 cases — the majority of whom are women and children ... were brought to local medical centers with symptoms indicative of exposure to a chemical agent," including difficulty breathing, skin discoloration, foaming of the mouth, eye burns and a chlorine-like odor.

"One of the injured was declared dead on arrival. Other patients were treated with humidified oxygen and bronchodilators, after which their condition improved," the statement said. "In several cases involving more severe exposure to the chemical agents, medical staff put patients on a ventilator, including four children. Six casualties were reported at the center, one of whom was a woman who had convulsions and pinpoint pupils."

A previous version of this post identified Douma as the last rebel-held stronghold; it is the last significant rebel-occupied territory in the immediate vicinity of Damascus, but rebels continue to hold territory farther from the capital.