Accessibility links
Nobel Prize Judges Face Crisis 'Worse Than One Can Imagine' After Resignations : The Two-Way Three members of the Swedish Academy, which awards the Nobel Prize in literature, protested its response to a simmering scandal by resigning their permanent roles. Now, the group is in a tough spot. 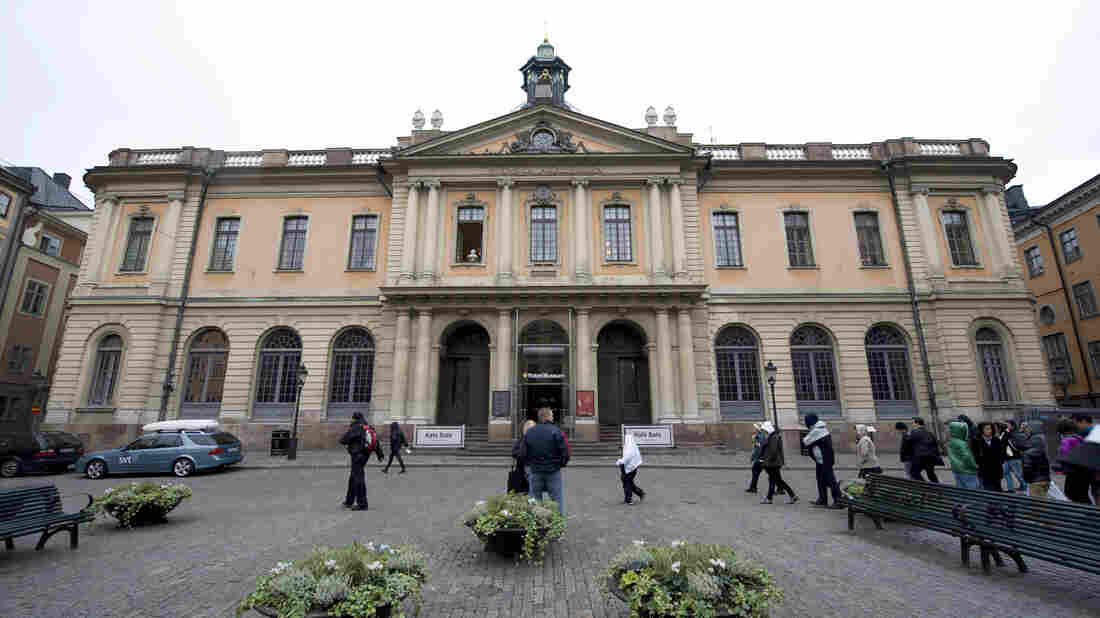 The Stockholm Stock Exchange Building, which has housed the Royal Swedish Academy since the early 20th century, seen in 2010. "It is a bomb dropped right onto the Stock Exchange Building," a local culture editor said of the allegations and subsequent resignations. "The institution is in ruins." Jonathan Nackstrand/AFP/Getty Images hide caption 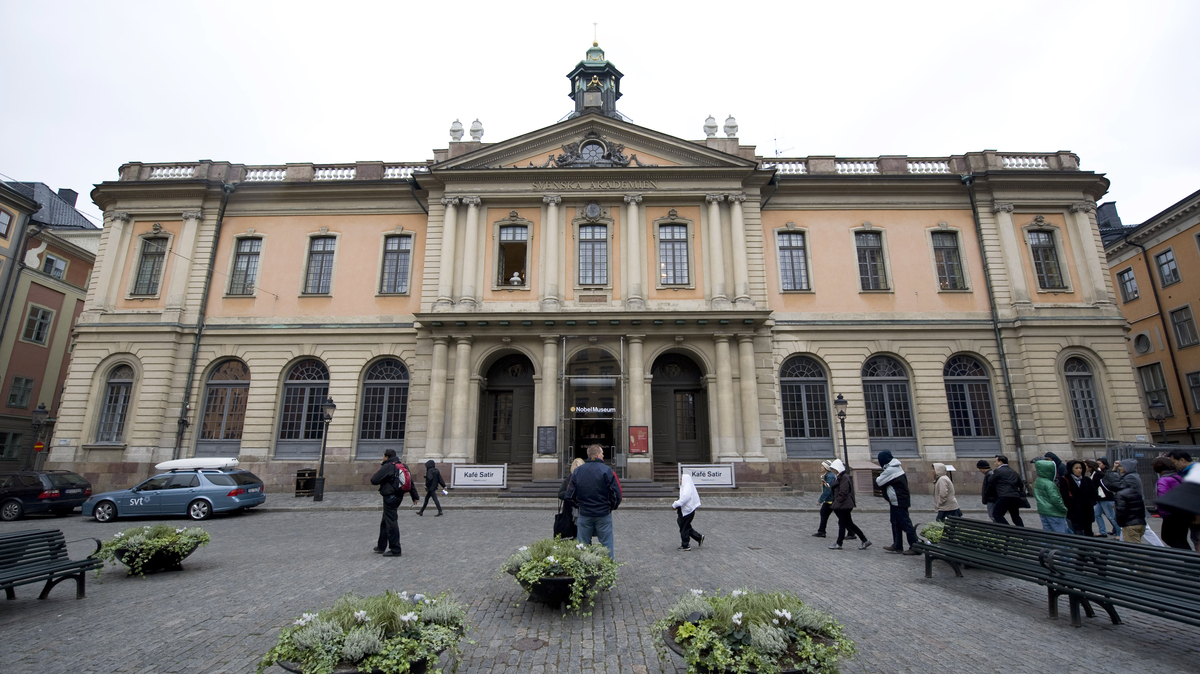 After three members of the Swedish Academy resigned Friday, protesting its response to a long-simmering scandal, the committee known for awarding the Nobel Prize in literature has found itself in unfamiliar — and precarious — territory: Beyond examining the merits of an author's past work, as it does each year, the centuries-old group is now also facing questions about its own future.

Peter Englund, the academy's former permanent secretary, and authors Klas Östergren and Kjell Espmark all resigned their technically permanent positions on the 18-member committee in quick succession, citing allegations against a high-profile figure closely associated with the group.

Those allegations first surfaced when the #MeToo movement hit Sweden last November, and the Stockholm daily Dagens Nyheter reported that the man — whom the newspaper has identified only as "Cultural Profile" — had allegedly sexually assaulted or harassed at least 18 women over the past two decades.

The New York Times and several Swedish media outlets have since identified the man as Jean-Claude Arnault, the influential director of a literary club in Stockholm that regularly attracts some of Sweden's most famous artists. Arnault's spouse is poet and longtime Swedish Academy member Katarina Frostenson, and Arnault allegedly committed several of these acts of misconduct in properties owned by the academy, according to Dagens Nyheter.

Since the article's release, the Swedish Academy has announced an investigation of its own, severed financial ties with the club and made clear the accused would not be welcome at future academy functions. It also commissioned a law firm to investigate the allegations and the man's ties to the academy.

And that investigation, in which Dagens Nyheter has taken part, uncovered another bombshell: The paper reported Monday that the "Cultural Profile," as the paper continues to describe him, leaked the names of at least seven recent Nobel winners before their announcement — including Bob Dylan, Svetlana Alexievich and Patrick Modiano.

The attorney for the accused told Reuters and the Times that he denies all the allegations against him.

It is unclear what, specifically, was discussed at a meeting convened by the Swedish Academy one day before the three members' resignations last week. But Anders Olsson, another member, told Sweden's TT news agency the group had voted on Frostenson's continued membership and "decided not to exclude the member by a clear majority."

That did not satisfy Englund, for one. 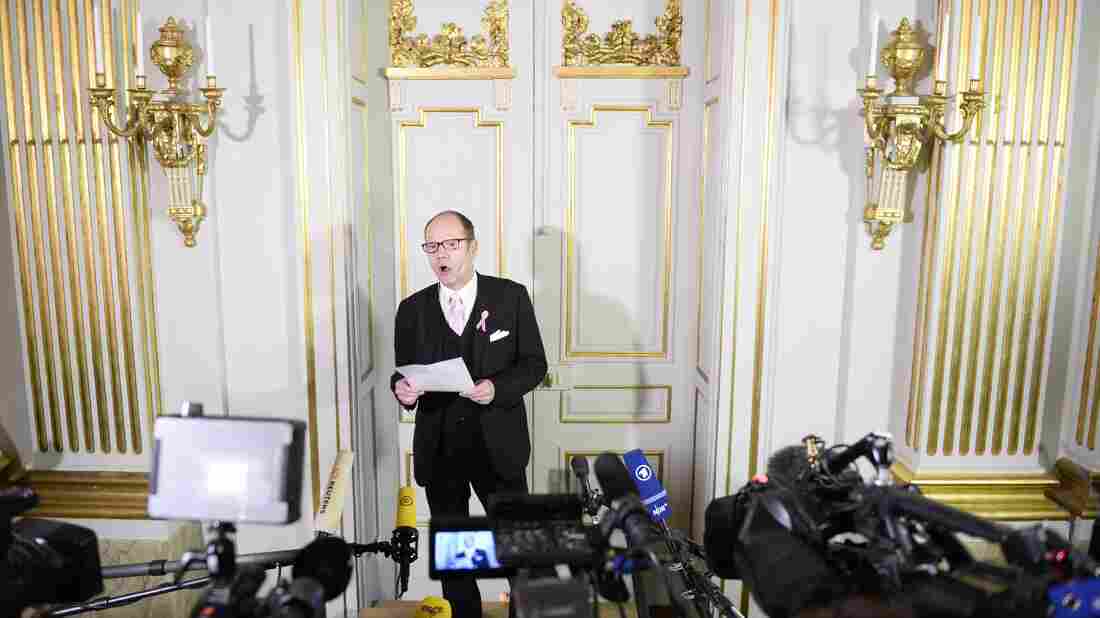 As permanent secretary from 2009 to 2015, Peter Englund fulfilled the Swedish Academy's most high-profile duty: announcing the winner of the Nobel Prize in literature. Here is is announcing French novelist Patrick Modiano's win in 2014. Jonathan Nackstrand/AFP/Getty Images hide caption 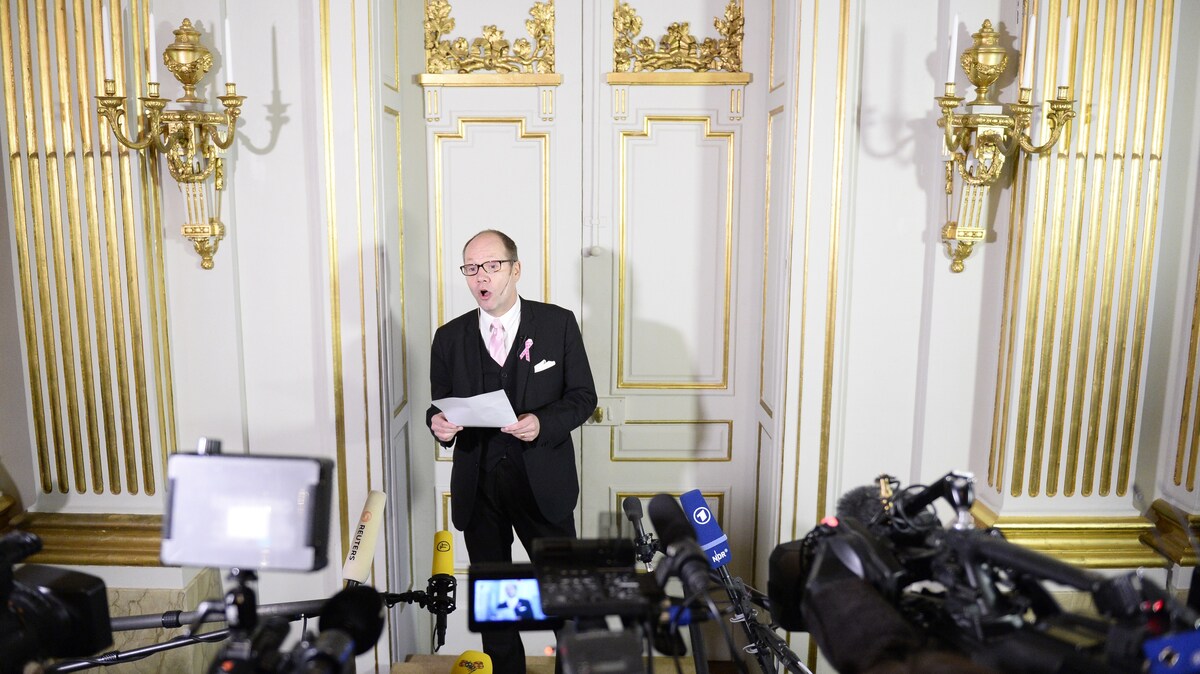 As permanent secretary from 2009 to 2015, Peter Englund fulfilled the Swedish Academy's most high-profile duty: announcing the winner of the Nobel Prize in literature. Here is is announcing French novelist Patrick Modiano's win in 2014.

"When the crisis over the so-called 'Culture Profile' began in November of last year, at first it seemed that consensus was ruling in the Swedish Academy. With time however, a growing gap has emerged," he said in a letter to the Swedish paper Aftonbladet on Friday.

Too many of the members, he explained, "have given too great consideration to the individual and too little consideration to the bylaws, and yes, even to the core ideals of the association. Decisions have been made that I neither believe in nor can defend, and I have, for those reasons, decided I will no longer participate in the work of the Swedish Academy."

Östergren and Espmark, who both resigned shortly before Englund, also objected to what they see as a disregard among members for the academy's bylaws. As Espmark put it in his own statement, "leading voices in the academy put friendship and other irrelevant considerations before [its] integrity."

Östergren, for his part, dipped into English to quote the singer-songwriter Leonard Cohen in concluding: "I'm leaving the table, I'm out of the game."

Those same bylaws could pose significant, even existential, problems for the Swedish Academy. The position each of the three men is vacating is designated for life, much like that of a U.S. Supreme Court justice — but unlike a Supreme Court justice, it's not exactly clear how to replace a living member who has vacated his seat, save waiting for him to die.

Take the example of Knut Ahnlund, who resigned his seat in 2005 to protest the decision to award a Nobel to Austrian writer Elfriede Jelinek — whose work, by the way, Ahnlund reportedly derided as "whingeing, unenjoyable, violent pornography." Ahnlund's seat simply sat dormant until after he died in 2012.

Rumblings of Controversy at the Swedish Academy

Rumblings of Controversy at the Swedish Academy

At the same time, though, the Times notes that the academy's bylaws demand the group have a quorum of at least 12 members before making a significant decision, such as electing a new member. With one more member, Sara Stridsberg, reportedly considering resignation too — and with members Kerstin Ekman and Lotta Lotass already on leave for separate reasons — the academy appears to be edging perilously close to a Catch-22: Once their number diminishes enough, they would need to replace members in order to function with a quorum — but they would first need a quorum in order to replace members.

The academy's current permanent secretary, Sara Danius, told local media they considering revising the rules. "If a member wants to leave the academy, it should be possible," Danius told Svenska Dagbladet.

Even Swedish King Carl XVI Gustaf, the academy's patron, weighed in Monday. According to The Associated Press, he told local media that the group's disputes represent "a sad development that I hope will be resolved," adding later that he was confident those problems would be.

Olsson, for his part, has sounded a much more wary note.

"I want to believe that the Academy can survive this crisis," Olsson told TT. "I never thought that we were actually in such a severe crisis, but I have come to realize it is worse than one can imagine."