Accessibility links
Mark Zuckerberg Testifies Before Senate : The Two-Way The CEO of Facebook testified before Congress for the first time on Tuesday. He apologized for allowing Facebook tools to be used to do harm — and vowed to take more responsibility over user content.

Mark Zuckerberg faced dozens of senators — and the American television audience — to take "hard questions" on how Facebook has handled user data and faced efforts to subvert democracy.

"We didn't take a broad enough view of our responsibility, and that was a big mistake. It was my mistake, and I'm sorry," the co-founder and CEO of Facebook, uncharacteristically wearing a suit, said in his opening remarks. "I started Facebook, I run it, and I'm responsible for what happens here."

Zuckerberg testified Tuesday before a joint session of the Senate commerce and judiciary committees.

He spoke for more than four hours. If you want the full experience, you can watch the video above, or on C-SPAN here.

The leaders of the committees, in their opening remarks, signaled that the status quo was not satisfactory and called for changes — voluntary or mandatory — to promote transparency and prevent abuse.

Facebook In Congress: What To Expect When Zuckerberg Goes To Capitol Hill

Sen. John Thune, chairman of the commerce committee, said the days of deferring to tech companies on questions of regulation may be ending — and that in his testimony, Zuckerberg has the opportunity to speak to supporters and to skeptics.

"We are listening," he told Zuckerberg in his opening statement. "America is listening. And, quite possibly, the world is listening too."

"If you and other social media companies do not get your act in order, none of us are going to have any privacy any more," Sen. Bill Nelson, ranking member of the commerce committee, said bluntly.

The remarkable hearing was a bit of a spectacle, at least by Senate committee hearing standards. It was also Zuckerberg's first appearance before Congress. He was the only witness in the joint session and will also be testifying before the House Energy and Commerce Committee on Wednesday.

Facebook is reeling from the Cambridge Analytica scandal, after news broke that millions of Facebook users' data had been improperly shared with a data analytics firm that worked with the Trump campaign. (The company says the Facebook data was legally acquired, and not used in any of its 2016 election work.)

The Federal Trade Commission has confirmed it is investigating how user privacy has been handled at Facebook.

On Tuesday, the company began informing users who were affected. You can check this page on Facebook's help site to see if you're among that number.

Nelson, a Florida Democrat, asked Zuckerberg why Facebook didn't inform users back in 2015, when it first discovered that user data had been sold to Cambridge Analytica.

"When we heard back from Cambridge Analytica that they had told us that they weren't using the data and deleted it, we considered it a closed case," Zuckerberg said. "In retrospect, that was clearly a mistake. We shouldn't have taken their word for it."

Facebook did not inform the FTC of the improper data sharing, Zuckerberg says. 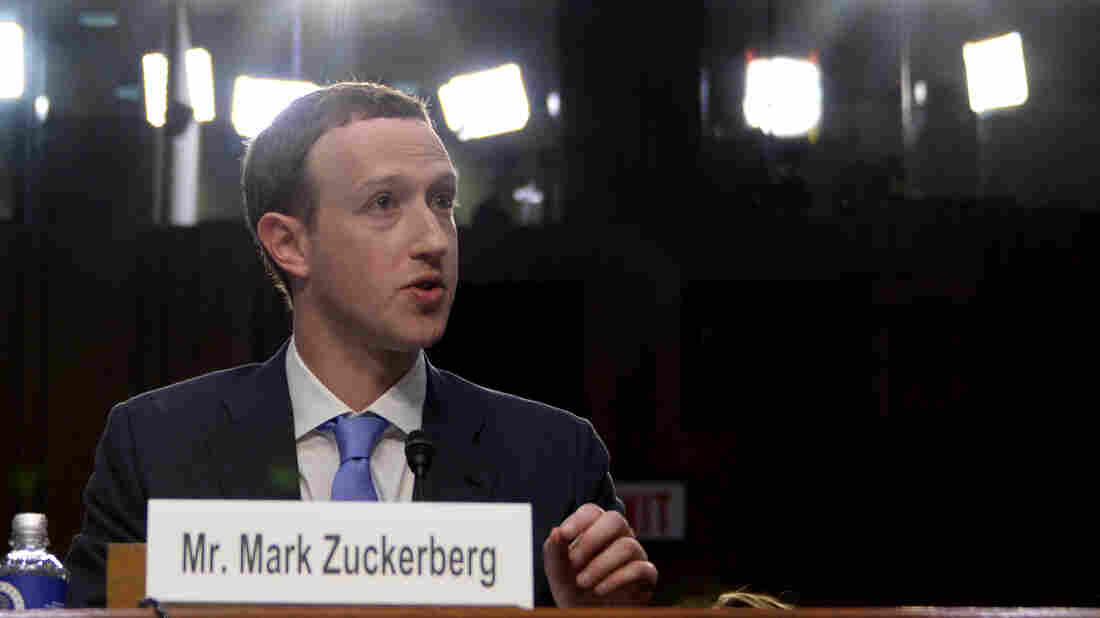 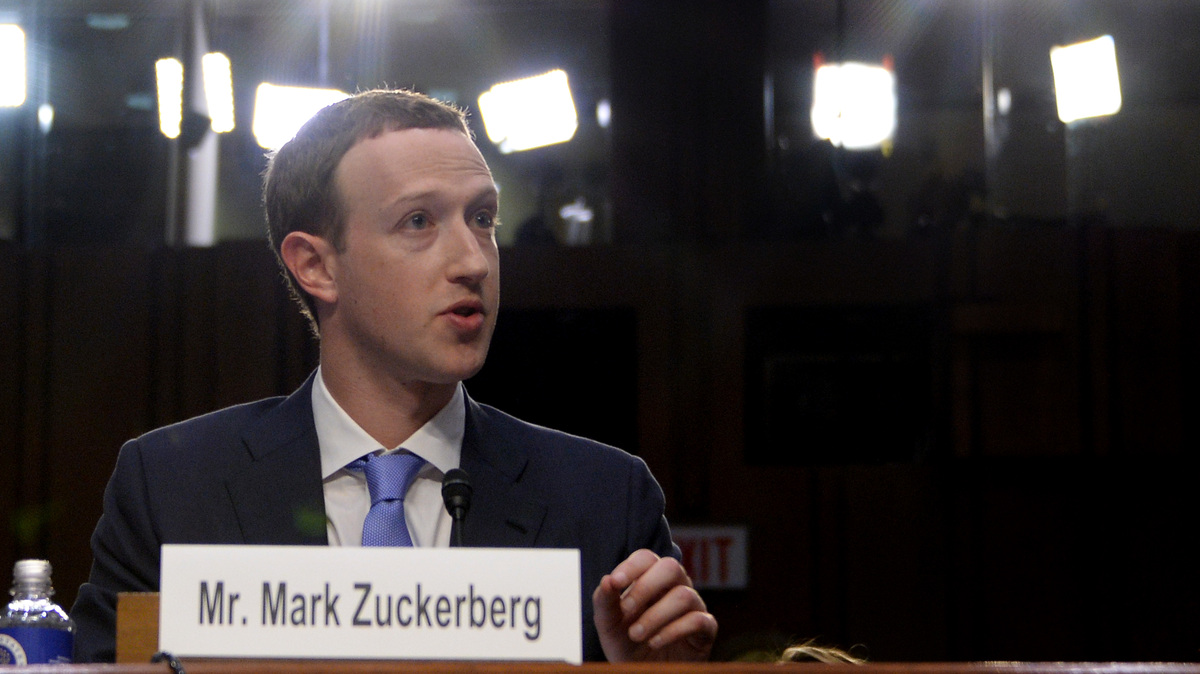 Facebook CEO Mark Zuckerberg testifies before a joint hearing of the U.S. Senate Commerce, Science and Transportation Committee and Senate Judiciary Committee on Capitol Hill in Washington, D.C., on Tuesday.

Facebook has blamed Aleksandr Kogan, the researcher who gathered user data and sold it to Cambridge Analytica, for violating Facebook's terms of service. But Richard Blumenthal, D-Conn., showed Zuckerberg the text of an agreement he said Kogan sent to Facebook when he set up his app. It claimed the right to "edit, copy, disseminate, publish, transfer, append or merge with other databases, sell, license ... and archive" data. Zuckerberg said he had not seen that text. He said that Facebook's app review team would have been responsible for that agreement and that nobody from that team has been fired over this scandal.

Zuckerberg also said that Kogan sold data to other companies in addition to Cambridge Analytica, including Eunoia Technologies and potentially "a couple of others"; he said he would provide lawmakers with more detail.

Zuckerberg agreed that "victims" was an appropriate word for the millions of users whose data was shared. "They did not want their information to be sold to Cambridge Analytica by a developer, and that happened, and it happened on our watch," he said. "Even though we didn't do it, I think we do have a responsibility to be able to prevent it."

But he denied that the data-sharing violated Facebook's a 2011 consent decree with the FTC.

Under the terms of that decree, Facebook is required to "obtain users' affirmative consent" before sharing their data. Most of the people affected by the Cambridge Analytica scandal did not opt in to Kogan's app, which collected that data; their data was scraped after a friend opted in. But Zuckerberg argued that the decree was not violated because the "Facebook Platform," which was set up to allow third-party developers to use Facebook data, allowed that practice. "I believe that we rolled out this developer platform and that we explained to people how it worked and that they did consent to it," he said.

Zuckerberg was also grilled on a wide range of other topics. Lawmakers were keenly interested in how Facebook handled — or mishandled — Russian election interference during the 2016 campaigns, how the platform plans to monitor and disclose who is responsible for ads, and how Facebook plans to prevent hate speech or discriminatory ads.

Zuckerberg said he that didn't know the answer to several questions or that he would have to check with his team, including whether Facebook employees worked directly with Cambridge Analytica and whether Facebook tracks users' activity across devices while they are offline.

Facebook has lost about $100 billion in value since February. As Zuckerberg testified on Tuesday, Facebook stock was up more than 4 percent for the day.

In Zuckerberg's prepared testimony — a longer version of his opening comments — he embraces a wider responsibility for user content than Facebook has claimed in the past. He also lays out efforts that he says will help protect users' information and defend against "bad actors" on the platform.

Regulation came up repeatedly in this hearing. Some lawmakers are pushing to establish rules for how Internet companies handle ads or user data. And Facebook has signaled that it might be open to some regulation, although the company also argues it is not waiting for laws to be passed to change its own behavior.

But, of course, lawmakers are divided on the question of regulation. Some senators from both sides of the aisle warned that Congress would step in if Facebook can't improve security.

But Sens. Orrin Hatch, R-Utah, and Roger Wicker, R-Miss., cautioned against overregulation in response to the scandal.

In addition to a split over regulation, senators were divided in their responses to Facebook's new, broader understanding of its responsibility for user content.

Here's what Zuckerberg said in his testimony:

Some senators asked questions about how, exactly, Facebook plans to be more proactive on this issue, while embracing the idea that Facebook will be accountable for harmful content.

But others — like Sen. Ben Sasse, R-Neb. — sounded a note of caution about the idea of Facebook deciding what's "positive" and what's not.

Sasse asked Zuckerberg to define hate speech and asked about a hypothetical future where "pro-lifers are prohibited about voicing their views" on Facebook.

"I wouldn't want you to leave here and think there's a unified view of the Congress that you should be moving toward policing more speech," he said.