Accessibility links
Chemical Weapons Team Is On Its Way To Syria, Watchdog Group Says : The Two-Way A team from the Organization for the Prohibition of Chemical Weapons plans to begin investigating the attack in Douma by Saturday. U.S. Defense Secretary Jim Mattis called the attack "inexcusable."

Chemical Weapons Team Is On Its Way To Syria, Watchdog Group Says

Chemical Weapons Team Is On Its Way To Syria, Watchdog Group Says 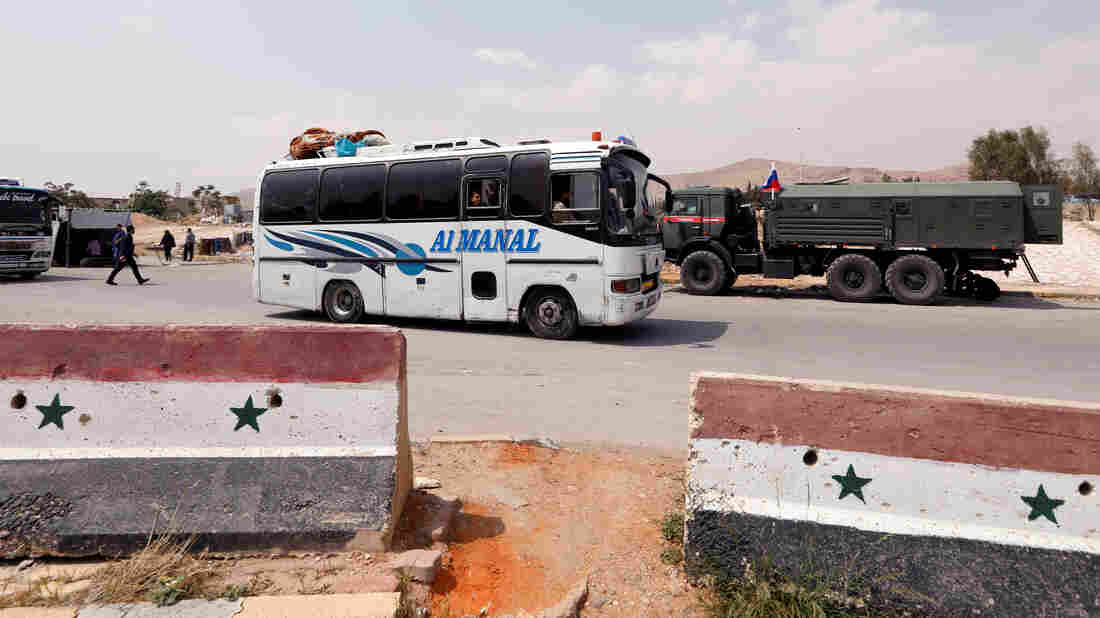 A bus carries rebels and their families who have fled Douma, Syria, the site of an alleged chemical attack over the weekend that killed dozens. Omar Sanadiki/Reuters hide caption 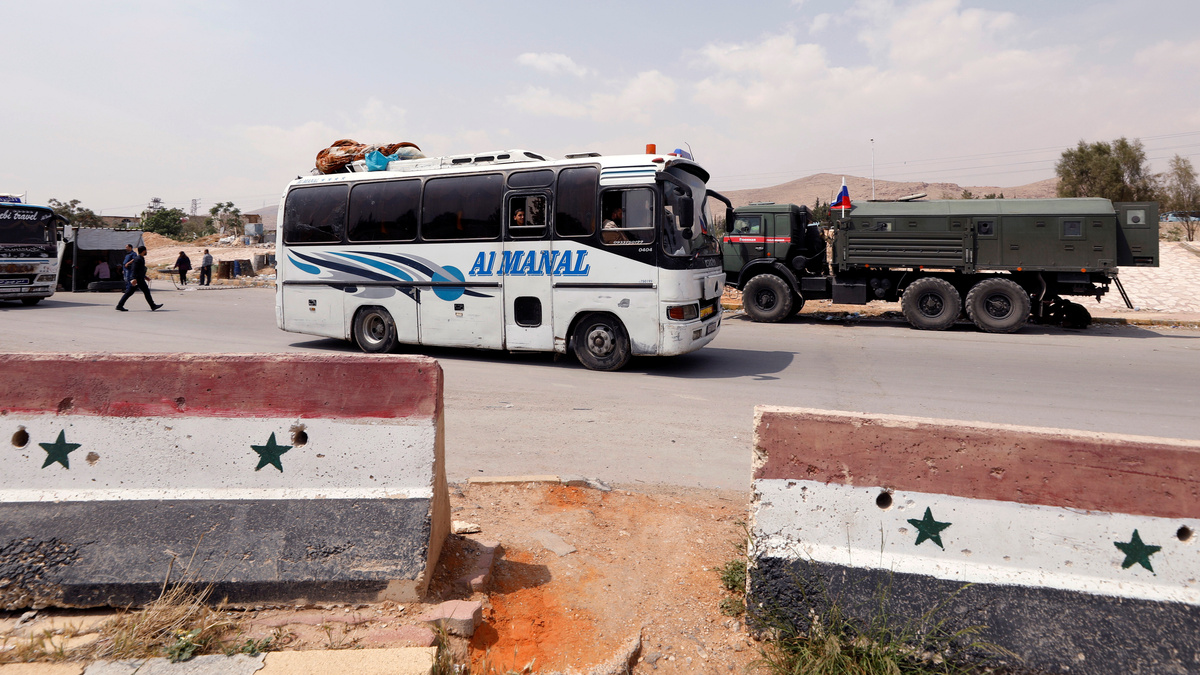 A bus carries rebels and their families who have fled Douma, Syria, the site of an alleged chemical attack over the weekend that killed dozens.

A fact-finding team from the Organization for the Prohibition of Chemical Weapons is on its way to Syria and will begin working there by Saturday, spokesperson Johan de Wittlaan said Thursday.

The team will investigate the recent killing of dozens of civilians in Douma in a horrifying attack over the weekend, in which Syrians were found to have died from suffocation in the city just outside Damascus.

"I think it looks pretty clear that a chlorine weapon was used" on the civilians, said Charles Duelfer, former deputy head of the U.N. inspections team in Iraq, in an interview with NPR.

When asked about expectations that the U.S. will launch a punitive strike on Syria over the attack, U.S. Secretary of Defense Jim Mattis said, "Some things are simply inexcusable — beyond the pale — and in the worst interests of not just the chemical weapons convention, but of civilization itself."

Syria and its main ally, Russia, have denied that any chemical weapons were used and gave permission for the OPCW to investigate.

Confirmation of the fact-finding team's trip comes after Russia said Douma had finally come under the government's total control, after the last rebel group that had been fighting Syria's regime there capitulated. As part of the takeover, Russia said, it will deploy military police in the city — a development that could lead to questions about the validity of the evidence of the attack.

The U.S. and other nations have condemned Syria's apparent use of a poisonous gas to attack Douma's civilians, particularly because it occurred in an area that was supposed to have been off-limits to warplanes. Since the attack, President Trump has been engaged in a spat with Russia, which threatened to shoot down any U.S. missiles that might be launched against Syria in retaliation.

Trump said Wednesday that the U.S. will strike Syria using missiles that are "nice and new and 'smart!' " — ramping up expectations that an attack was imminent. But on Thursday, he tweeted, "Never said when an attack on Syria would take place. Could be very soon or not so soon at all!"

As Trump has talked about ordering a new military strike on Syria, the regime led by President Bashar Assad has been busy. From Beirut, NPR's Ruth Sherlock reports on preparations for a U.S. attack:

"They're thought to be moving planes and weapons to more secure locations. They've apparently evacuated a lot of the main airports and military bases. Air defenses are on high alert. And for the civilian population, there's this kind of palpable sense of fear.

"People in the capital Damascus were saying that they have been up into the early hours of each night waiting for a possible attack. And one person said, 'You can cut the tension with a knife here.' " 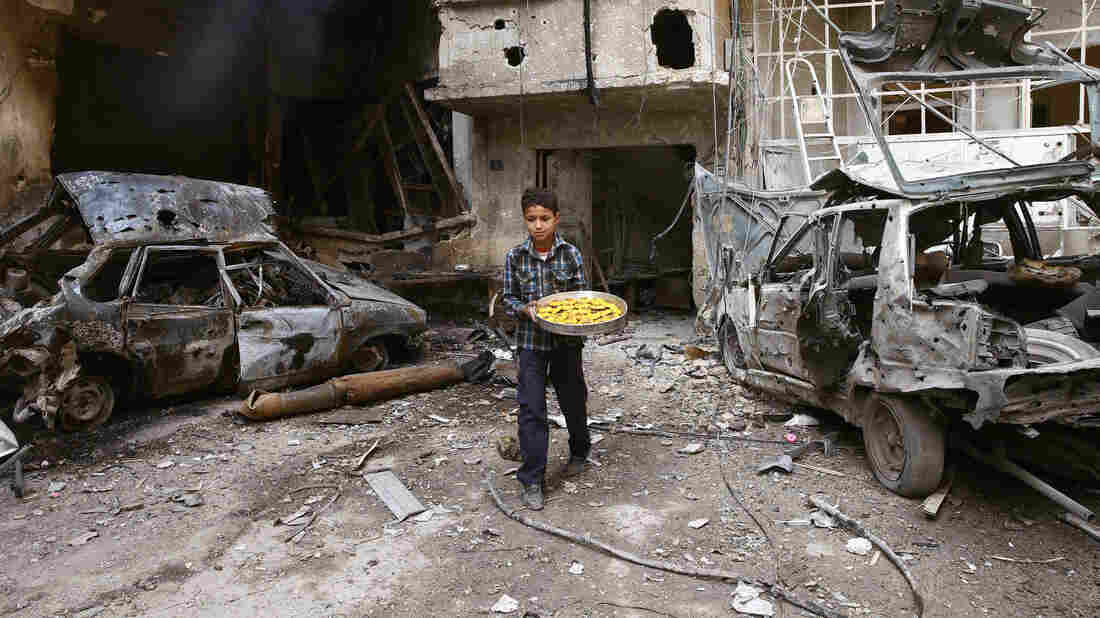 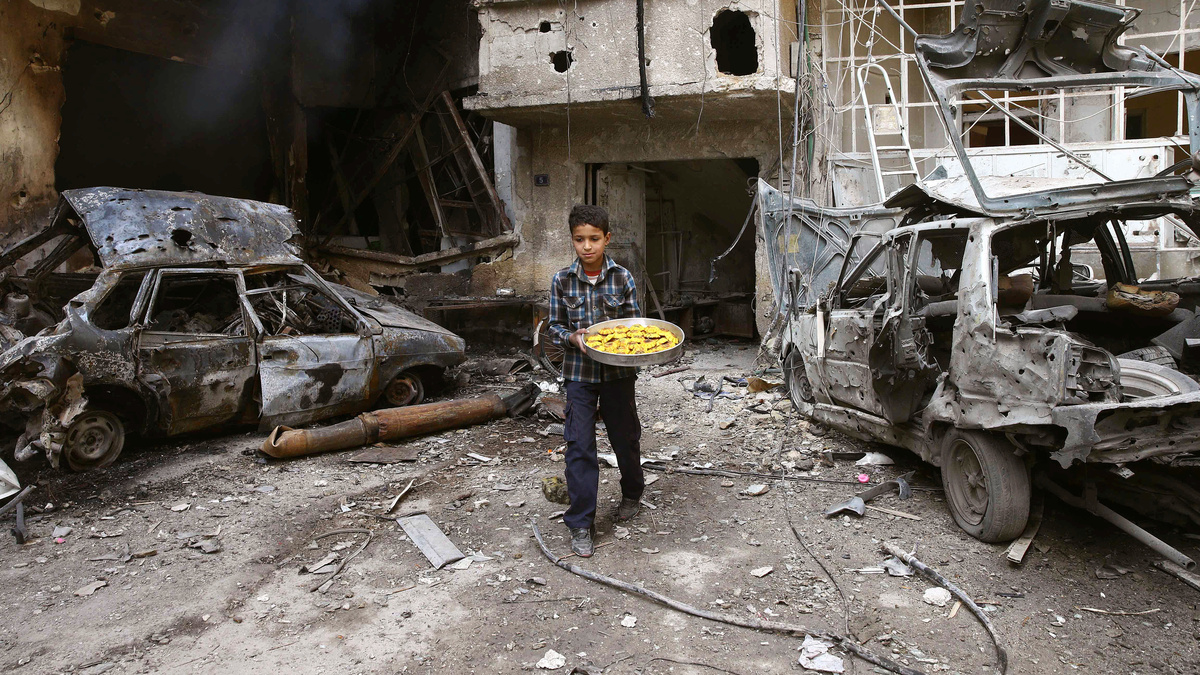 How The U.S. Is Prepared To Respond To Apparent Chemical Attack In Syria

Douma is just 6 miles northeast from the center of Damascus. It has been fought over since at least 2012, when government troops battled for control of both the city and the broader Eastern Ghouta region. Since that time, much of the rebel enclave has been under siege.

The recent attack on Douma came after months of warnings that the "de-escalation zone" status of Eastern Ghouta had become "a farce," as State Department spokesperson Heather Nauert said in February, when the U.S. accused Russia and Syria of carrying out attacks on civilians and targeting medical facilities.

Thousands of people have fled Douma and Eastern Ghouta, desperate to find safety. In the past 12 days alone, 12,000 people left the city, Syria's state news agency said. Across Eastern Ghouta, more than 165,000 people have left via secure corridors. Rebel groups made deals to secure their safety as they departed — many of them heading north for Idlib. Then came the news that the last holdout group, Jaysh al-Islam, had finally agreed to leave. Many of them also reportedly headed north to Aleppo.

"Today marked a landmark event in Syria's history," said Yuri Yevtushenko, who heads the Russian Center for Reconciliation of the Opposing Parties in Syria. As reported by the state-run Tass news agency, Yevtushenko added that Syria's official flag had now been hoisted over Douma, signaling control over Eastern Ghouta.