Accessibility links
History Of U.S. Responses To Chemical Weapons Attacks In Syria : The Two-Way Presidents Trump and Obama both have had to decide whether to take action against the Assad government after civilian deaths. 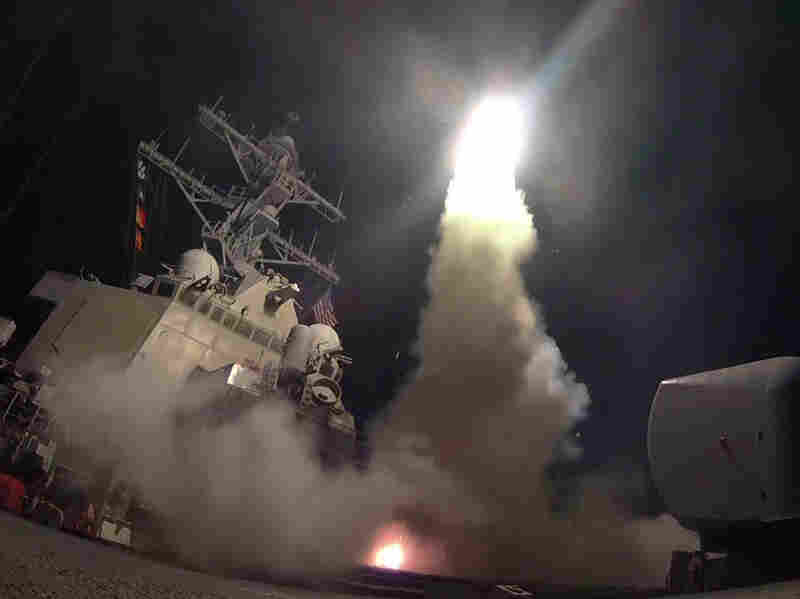 The USS Porter launches a tomahawk missile as part of the U.S. strikes in 2017 against the Syrian regime. Ford Williams/U.S. Navy via AP hide caption 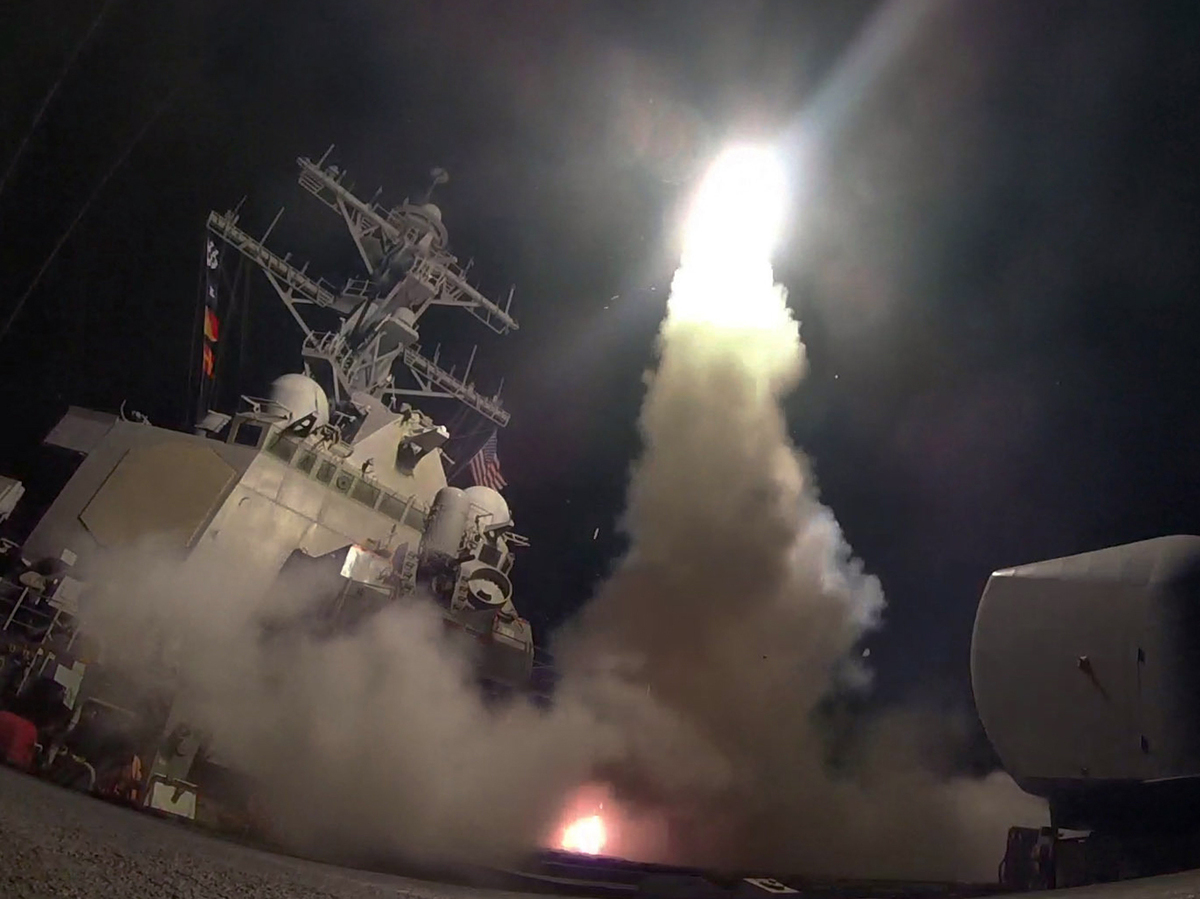 The USS Porter launches a tomahawk missile as part of the U.S. strikes in 2017 against the Syrian regime.

President Trump announced military action against Syria Friday as a response to an alleged chemical weapons attack April 7 in a Damascus suburb.

While the rebel-held town of Douma was under heavy government attack, dozens of civilians died in a strike that pro-opposition activists and rescue workers allege was a chemical attack.

Independent inspectors are attempting to assess the attack this weekend. Some analysts say chlorine could have been the substance used. It has been used repeatedly before by the regime but does not usually cause heavy casualties. It's also possible the chemical was chlorine mixed with another substance.

Syria denies it launched a chemical attack, though a U.N. panel has attributed more than two dozen such attacks to it over the course of the seven-year civil war.

Russia, which backs the Syrian government, called a U.N. Security Council emergency meeting Friday and warned against a possible U.S. military strike. Russian troops and aircraft are in Syria in combat against rebel-held parts of the country.

The U.S. counters it is certain Syria used chemical weapons, though it has not concluded which kind of chemical was used.

The U.S. strike on Syria is the second one by the Trump administration. Here's some of the background.

Last year on April 6, Trump ordered an attack on the Shayrat air base in central Syria. It was allegedly the base from which planes had launched chemical attacks on rebel-held areas.

The U.S. struck the base with 59 Tomahawk cruise missiles targeting runways and hangars. The strike killed several Syrians, according to local Syrian officials.

But Syria and an independent monitoring group said planes were able to take off from the base again within hours.

The U.S. strike was in response to a chemical attack on Khan Sheikhoun, a rebel-held town in northeastern Syria just two days before, on April 4, 2017.

More than 80 people were killed, and images of adults gasping for air and babies on respirators drew world outrage.

The U.N.-backed Organization for the Prohibition of Chemical Weapons concluded in June 2017 that sarin was the nerve agent used in the attack.

Several months later (and long after the U.S. missile strike), a U.N. panel concluded it was confident the Syrian government had carried out the attack.

The Obama "red line" and the chemical deal

Syria was long known to have large chemical weapons stockpiles.

In 2012, President Barack Obama said the use of chemical weapons by the Syrian regime would not be tolerated. He said it would be "a red line for us."

In August 2013, a chemical attack in the eastern Ghouta suburb of Damascus killed more than 1,500 people, including hundreds of children. Horrific images circulated.

Obama gave a speech saying the U.S. should act against Syria. But he said Congress should authorize any military action.

Over the next month, it appeared there was little support in Congress or among the U.S. public for military intervention. The U.S. endorsed a Russian-backed plan to remove chemical stocks from Syria. More than 1,300 tons of chemical agents were removed.

Chlorine was not part of the deal, since it is commonly used for water treatment and other industrial purposes.

Last weekend, pro-opposition rescue workers in the Damascus suburb of Douma — in the eastern Ghouta district — said 43 people were killed in what they described as a chemical attack. The figure for the dead and the exact weapons used — and whether they were chemical weapons — have not been independently verified, though local medical workers say the symptoms indicate a chemical attack.

Many of those killed, activists say, were in the basement of a house, which could be where an intense concentration of the chemical settled.

It's worth noting that more than a half million Syrians have died in the seven-year-old war (now entering its eighth year). Only a tiny percentage of those have been killed in chemical strikes. The vast majority have been killed by regime bombs, bullets, primitive barrel bombs (drums filled with explosives often dropped from helicopters) and other conventional weapons.

About half the country, some 12 million people, have been displaced -- 6.1 million inside Syria. Some 5.4 million have fled the country.