Accessibility links
Protesters Rally Outside Philadelphia Starbucks After Arrests Of 2 Black Men : The Two-Way Demonstrators gathered on Sunday after two black men were arrested on suspicion of trespassing. The men were later released, and the incident has drawn accusations of racial profiling. 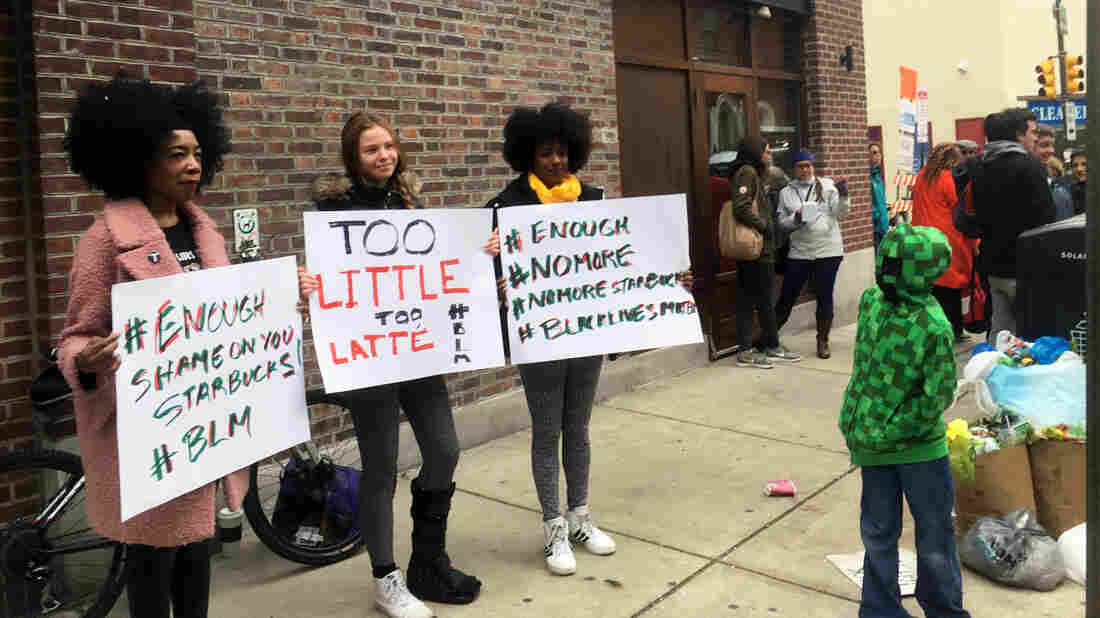 Protesters gather outside a Starbucks in Philadelphia on Sunday, where two black men were arrested Thursday after Starbucks employees called police to say the men were trespassing. Ron Todt/AP hide caption 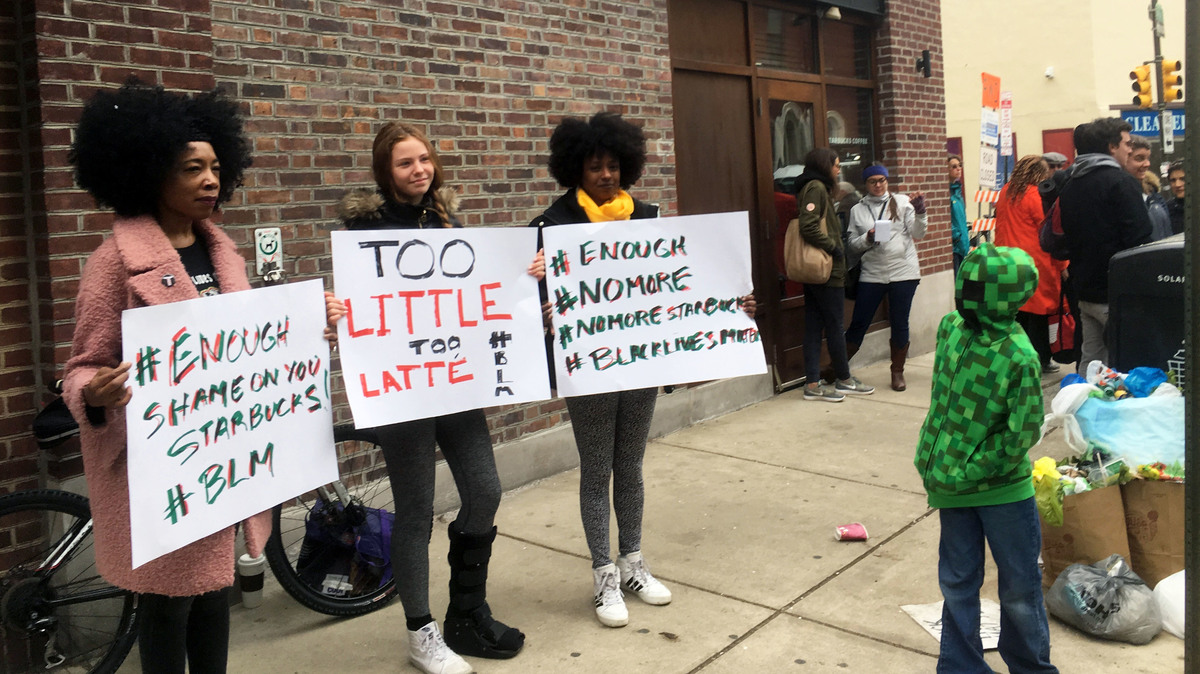 Protesters gather outside a Starbucks in Philadelphia on Sunday, where two black men were arrested Thursday after Starbucks employees called police to say the men were trespassing.

The demonstration began around noon outside the City Center Starbucks, with protesters carrying megaphones and signs that read "Too Little Too Latte," and "#Enough/Shame On Your Starbucks." Some social media users have begun using the hashtag #BoycottStarbucks in posts about the arrest.

On Saturday, Starbucks CEO Kevin Johnson released a statement offering "our deepest apologies" to the two men who were handcuffed and taken out of the café by police last week. Johnson also declared a company "goal of doing whatever we can to make things right," and said he hoped "to meet personally with the two men who were arrested to offer a face-to-face apology."

Starbucks customers recorded the arrest on their cell phones, and in a video posted on social media, a man named Andrew Yaffe, who is white, says he's there to meet with the two being placed in handcuffs by police. "What did they get called for? Because there are two black guys sitting here meeting me? ... What did they do?"

"They didn't do anything," a woman responds in the video, "I saw the entire thing."

Police arrested the men, and took them to a police station where they were fingerprinted and photographed. The men were released nearly eight hours later, and charges were never filed. Their attorney, Lauren Wimmer, told The Washington Post the district attorney found no evidence of a crime, and added that the manager of the Starbucks where the arrests occurred was white.

Melissa DePino, who recorded the video that went viral on social media, amassing more than 9 million views, described the arrest to Philadelphia magazine, "These guys never raised their voices. They never did anything remotely aggressive ... I was sitting close to where they were. Very close. They were not doing anything. They weren't."

Starbucks it "stands firmly against" racial profiling and is investigating the incident.

"The police should not have been called in this situation," Starbucks Chief Operating Officer Rosalind Brewer told NPR's Rachel Martin on Monday, adding that as an African-American herself, she found it painful to watch the video.

"This is a teachable moment for all of us," she said. "And we take full responsibility to make sure that our company remains great. Good companies acknowledge their mistakes and learn from them and then make the necessary changes."

Philadelphia Police say they are also conducting an internal investigation.

In statement, Philadelphia Mayor Jim Kenney criticized Starbucks for its role in the arrests, and says he is "heartbroken to see Philadelphia in the headlines for an incident that — at least based on what we know at this point — appears to exemplify what racial discrimination looks like in 2018."

He's asked the Philadelphia Commission on Human Relations to determine if Starbucks needs training for implicit bias, or unconscious discrimination that can impact the judgments and actions of its employees.

"Starbucks should be a place where everyone is treated the same, no matter the color of their skin," Kenney said.

I’m very concerned by the incident at Starbucks. I know Starbucks is reviewing it and we will be too. @PhillyPolice is conducting an internal investigation. https://t.co/fp0NjwiO2L

The company says it plans to hold a company-wide meeting this week to discuss next steps.

"Regretfully, our practices and training led to a bad outcome — the basis for the call to the Philadelphia Police Department was wrong," Johnson said, "Our store manager never intended for these men to be arrested and this should never have escalated as it did."

Starbucks says it will hold a company-wide meeting this week to discuss next steps, and "underscore our long-standing commitment to treating one another with respect and dignity."

"This is a time for us to look at policies, to look at our training and development, to look at our store managers and give them the required skills that they need," Brewer said, "and we're doing all of that."