Accessibility links
'Father Of Gynecology,' Who Experimented On Enslaved Women, No Longer On Pedestal In NYC : The Two-Way J. Marion Sims perfected a new surgical procedure by repeatedly operating, without anesthesia, on enslaved women in the 1840s. New York City is moving his Central Park statue to a cemetery.

'Father Of Gynecology,' Who Experimented On Slaves, No Longer On Pedestal In NYC

'Father Of Gynecology,' Who Experimented On Slaves, No Longer On Pedestal In NYC 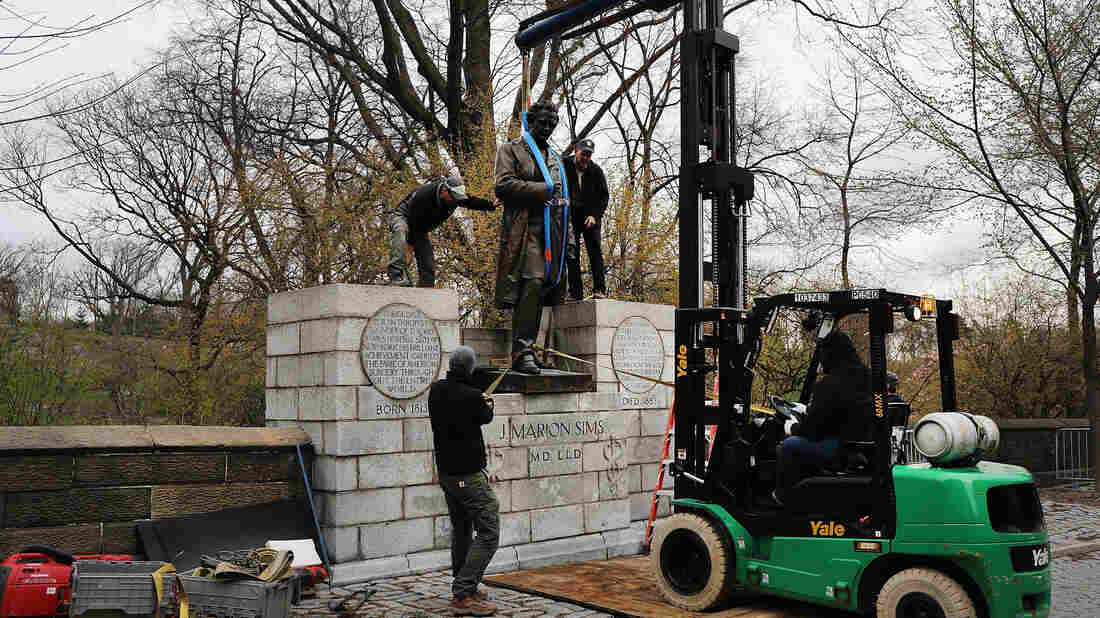 A statue of surgeon J. Marion Sims is taken down from its pedestal in Central Park on Tuesday. A New York City panel decided to move the controversial statue after outcry, because many of Sims' medical breakthroughs came from experimenting on enslaved black women without anesthesia. Spencer Platt/Getty Images hide caption 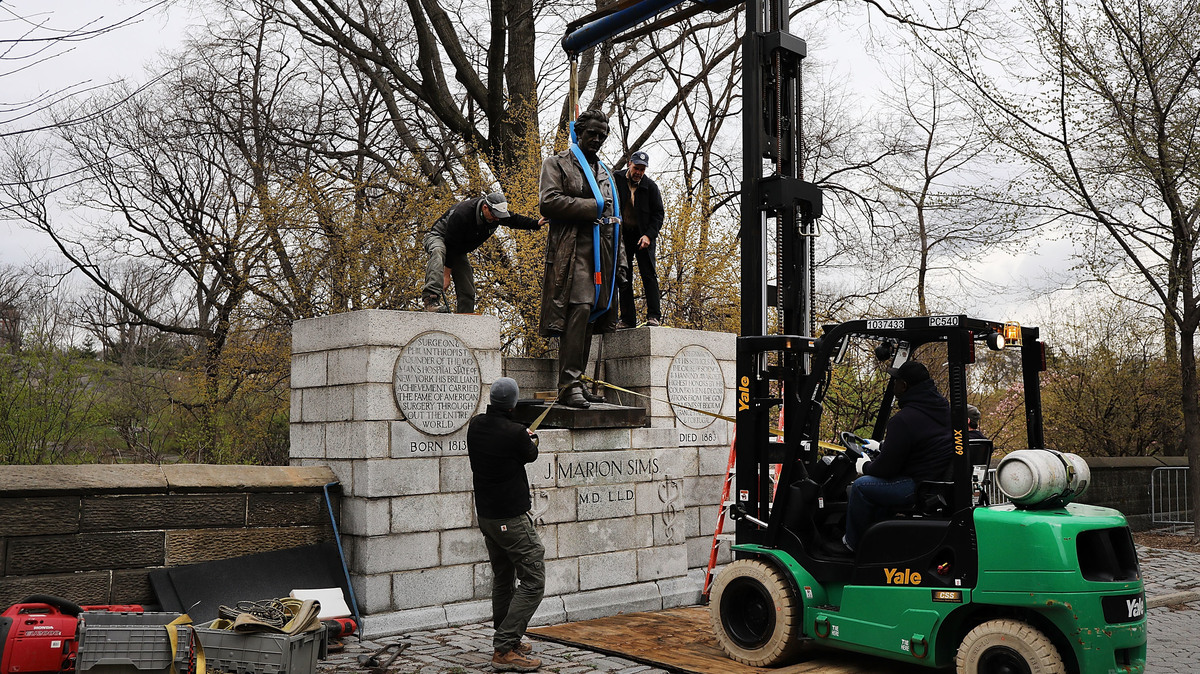 A statue of surgeon J. Marion Sims is taken down from its pedestal in Central Park on Tuesday. A New York City panel decided to move the controversial statue after outcry, because many of Sims' medical breakthroughs came from experimenting on enslaved black women without anesthesia.

New York City has removed a statue of J. Marion Sims, a 19th-century gynecologist who experimented on enslaved women, from a pedestal in Central Park.

The statue will be moved to a cemetery in Brooklyn where Sims, sometimes called the "father of gynecology," is buried. A new informational plaque will be added both to the empty pedestal and the relocated statue, and the city is commissioning new artwork to reflect the issues raised by Sims' legacy.

The 1890s statue was installed across the street from the New York Academy of Medicine in 1934, with a plaque praising Sims' "brilliant achievement." Sims perfected a technique to repair fistulas, which are holes between the vagina and the bladder or rectum and can lead to incontinence, by repeatedly conducting painful experimental surgeries on enslaved black women without using anesthesia.

Remembering Anarcha, Lucy, and Betsey: The Mothers of Modern Gynecology

The Public Design Commission approved the decision unanimously on Monday, and less than a day later, the statue came down.

A small crowd watched and cheered, New York Daily News reports, with one spectator calling out, "Off with his head!"

Harlem resident Mercy Wellington spoke to the Daily News about watching the statue come down.

"I feel that my ancestors can rest," she told the newspaper.

"Each day I walked past that statue and I saw him up there, I felt personally disrespected. ... It's a historical moment for me, and it's an emotional moment. I just feel the right thing is being done." 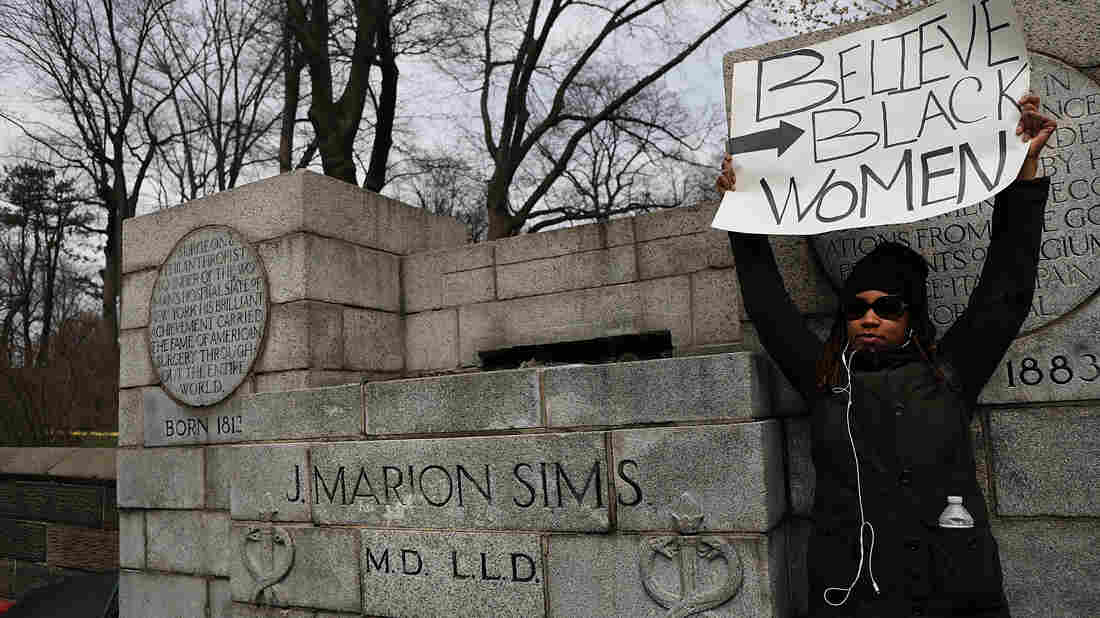 A woman stands beside the empty pedestal where a statue of J. Marion Sims used to stand. Multiple groups demanded the removal of the statue, which sat on a pedestal praising his achievements as "brilliant" without acknowledging the women who endured his painful experiments. Spencer Platt/Getty Images hide caption 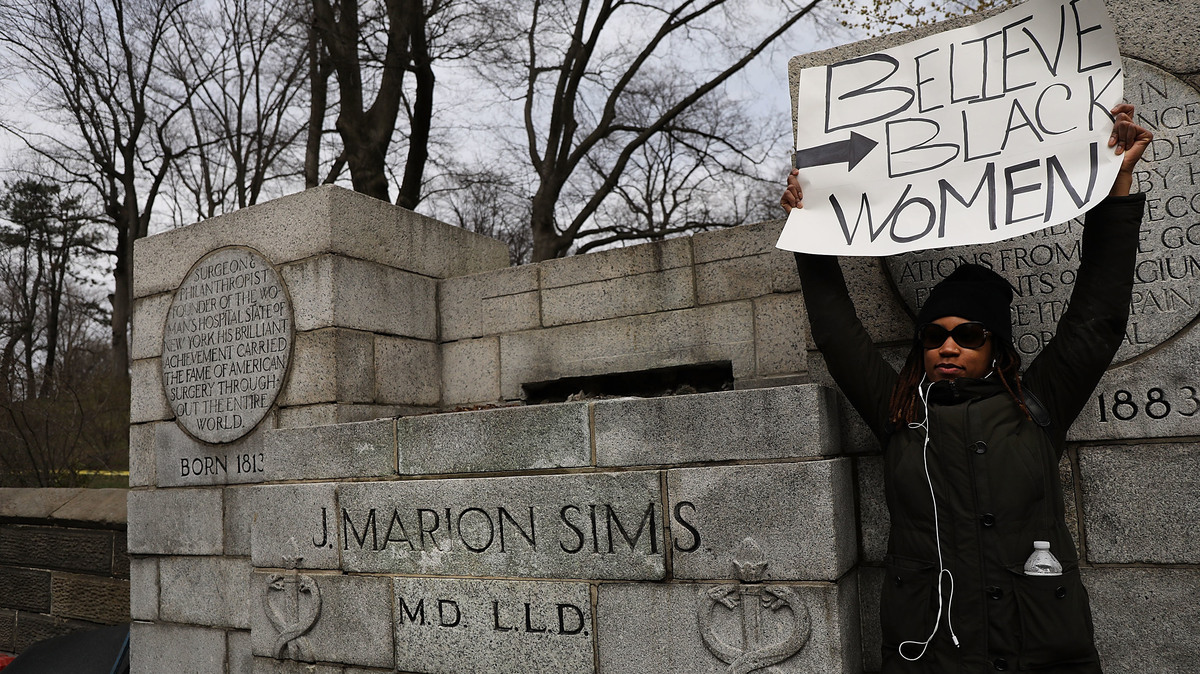 A woman stands beside the empty pedestal where a statue of J. Marion Sims used to stand. Multiple groups demanded the removal of the statue, which sat on a pedestal praising his achievements as "brilliant" without acknowledging the women who endured his painful experiments.

Vanessa Northington Gamble, a physician and medical historian at George Washington University, spoke to NPR's Hidden Brain podcast in 2016 for an episode about Sims' legacy.

She explained that in the 1840s, to develop a treatment for fistulas, Sims spent years experimenting on enslaved women. He conducted surgeries on a number of women, but we only know the names of three of them: Anarcha, Lucy and Betsey.

In his autobiography, Sims describes negotiating with slaveowners: "I made this proposition to the owners of the negroes: If you will give me Anarcha and Betsey for experiment, I agree to perform no experiment or operation on either of them to endanger their lives, and will not charge a cent for keeping them, but you must pay their taxes and clothe them." He also complains about the expense of feeding them.

In addition to Anarcha, Betsey and Lucy, Sims writes, "I got three or four more to experiment on, and there was never a time that I could not, at any day, have had a subject for operation. But my operations all failed ... this went on, not for one year, but for two and three, and even four years."

The surgeries, which were repeated again and again on the same women — 30 times on Anarcha — were painful. Sims wrote in his autobiography of the results of one "stupid thing" he tested: "Lucy's agony was extreme. She was much prostrated, and I thought that she was going to die. ... After she had recovered entirely from the effects of this unfortunate experiment, I put her on a table, to examine."

Sims also says the women wanted the surgeries because they wanted to be cured. As Gamble notes, we only have his word for that. And the New York City commission writes: "Free consent to participate in the experiments was not obtainable from women who were not free."

(Sims' own statements on this are mixed. Years after his initial tests, he said he still didn't believe in using anesthesia for fistula surgeries because "they are not painful enough to justify the trouble and risk." But he also said the experimental surgeries on his enslaved subjects were "so painful, that none but a woman could have borne them," and in his autobiography, he describes conducting fistula operations in Europe on wealthy women who were sedated.)

And, in America today, black women are far more likely to die during pregnancy or childbirth than white women are.

Poet Bettina Judd drew on her own experience, as a black woman who saw doctors dismiss her pain as she endured an agonizing ovarian torsion, as she reflected on the experiences of Lucy, Betsey and Anarcha.

She shared several poems with Hidden Brain, including "Betsey Invents the Speculum":

"Introducing the bent handle of the spoon I saw everything, as no man had ever seen before" — from The Story of My Life by J. Marion Sims

I have bent in other ways
to open the body make space ...

Sims invents the speculum
I invent the wincing

the if you must of it
the looking away

the here of discovery. 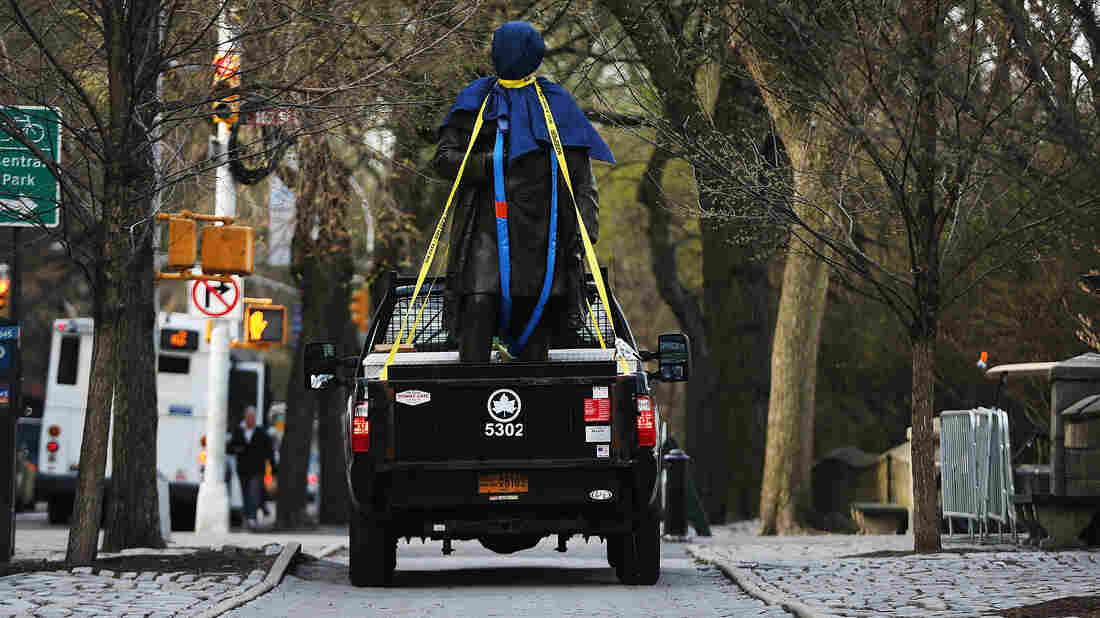 The statue, shown being driven away in a Parks Department truck on Tuesday, will be relocated in Green-Wood Cemetery in Brooklyn, where Sims is buried. Spencer Platt/Getty Images hide caption 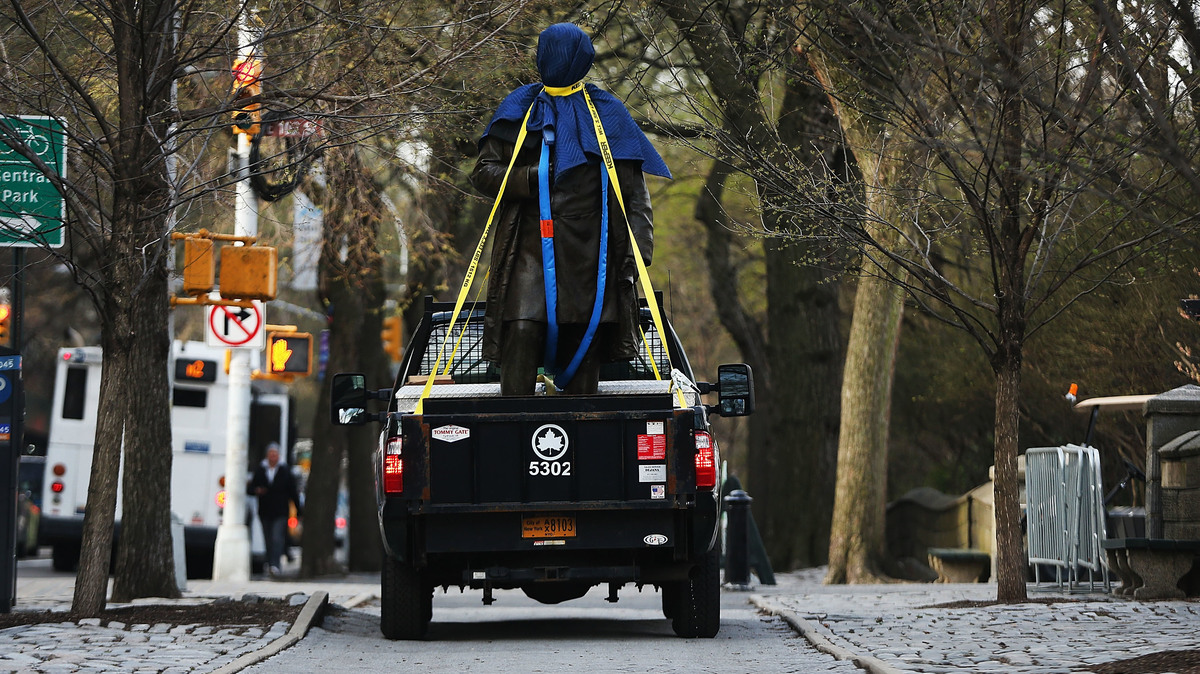 The statue, shown being driven away in a Parks Department truck on Tuesday, will be relocated in Green-Wood Cemetery in Brooklyn, where Sims is buried.

The "distressing imbalance in power" between Sims and the enslaved women played a key role in the New York City mayoral commission's recommendation to remove the statue.

The group considered more than 800 other monuments, statues and markers; the Sims is the only one it overwhelmingly advised relocating.

The commission laid out its reasoning in a lengthy report. It emphasized that a reckoning with history means not just removing controversial statues, but also adding "representation of overlooked histories." In some cases, monuments could be improved by "re-contextualization" to provide more information about the historical figure depicted.

But in the case of the Sims statue, the commission overwhelmingly urged taking it down from its literal pedestal — and commissioning another type of monument, such as one dedicated to women of color in science and medicine.

"There is no question about the abuse of the women he experimented on," the commission wrote. And yet, in the statue's pose and the adulatory prose on its plaque, "there is no ambiguity to the monument's glorification."

In addition, "the surrounding neighborhood of East Harlem/El Barrio largely consists of communities of color" that have been asking that the statue be taken down for decades, the commission noted.

In addition to the monument in New York, Sims is memorialized with statues in South Carolina and in Montgomery, Ala.