Accessibility links
Starbucks Closing 8,000 Stores For An Afternoon, For Racial-Bias Education : The Two-Way Last week, two black men were arrested at a Starbucks in Philadelphia, where they were quietly waiting to meet someone. Starbucks has apologized and has now announced a training on May 29. 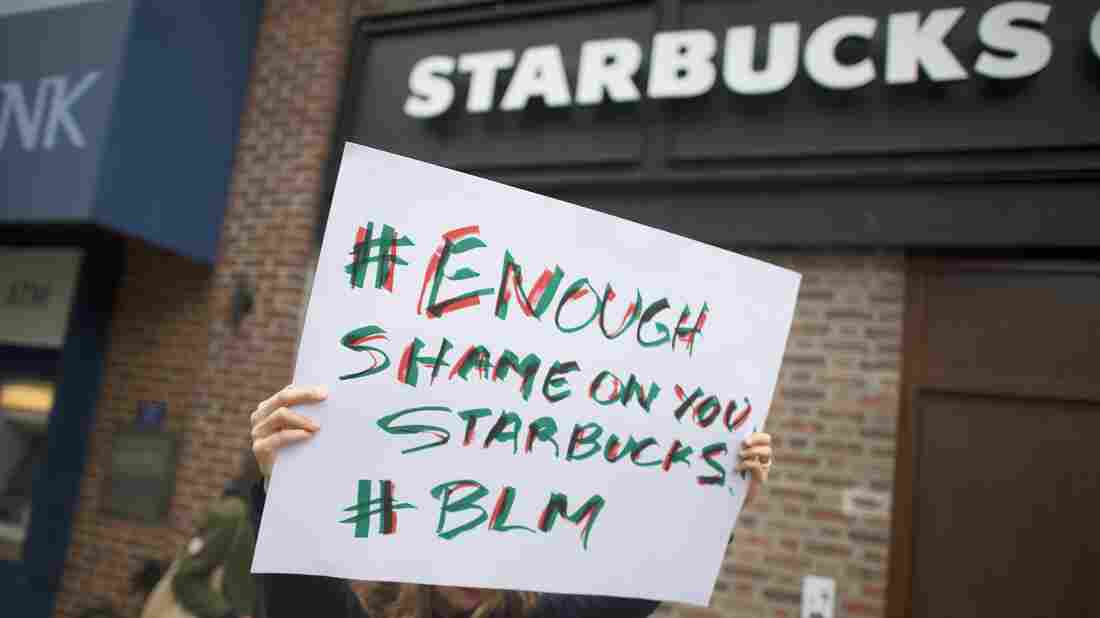 Protesters demonstrate outside a Starbucks in Philadelphia on Sunday, several days after police arrested two black men who were waiting inside the Center City coffee shop. The chain has announced it will close for an afternoon on May 29 for companywide racial-bias training. Mark Makela/Getty Images hide caption 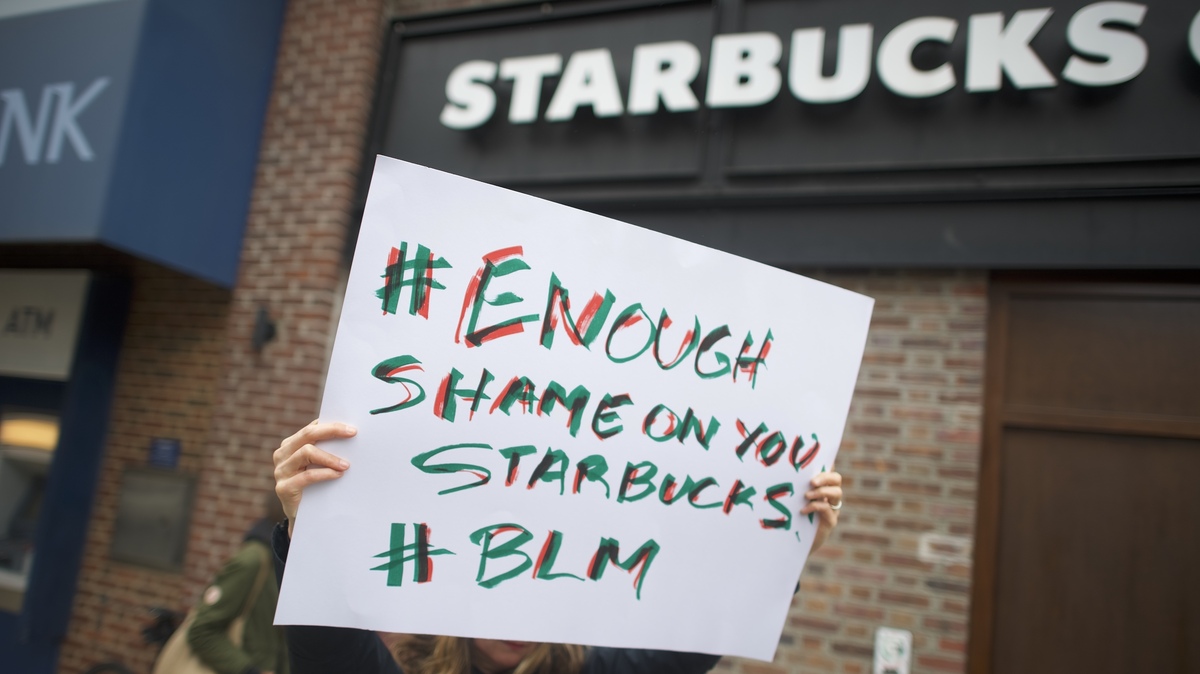 Protesters demonstrate outside a Starbucks in Philadelphia on Sunday, several days after police arrested two black men who were waiting inside the Center City coffee shop. The chain has announced it will close for an afternoon on May 29 for companywide racial-bias training.

Starbucks is closing thousands of stores across the U.S. on the afternoon of May 29 to conduct "racial-bias education geared toward preventing discrimination in our stores," the company said in a statement.

The coffee shop chain has been criticized and protested against after two black men were arrested last week at a Starbucks in Philadelphia, where they were quietly waiting to meet someone. Starbucks employees called 911 after one of the men, who had not yet purchased anything, asked to use the bathroom and then remained at the shop.

Other customers recorded the arrest and protested that the men hadn't done anything wrong. They pointed out that white customers were allowed to sit without buying anything without being handcuffed.

Starbucks has apologized for the incident; CEO Kevin Johnson said his goal is to do "whatever we can to make things right" and promised "any necessary changes to our practices that would help prevent such an occurrence from ever happening again."

On Monday, Johnson met with the two men who were arrested.

With Chants Of 'Starbucks Coffee Is Anti-Black' Protesters Take Over Philadelphia Store April 16, 2018

"I've spent the last few days in Philadelphia with my leadership team listening to the community, learning what we did wrong and the steps we need to take to fix it," Johnson said in the company statement on Tuesday. "While this is not limited to Starbucks, we're committed to being a part of the solution. Closing our stores for racial-bias training is just one step in a journey that requires dedication from every level of our company and partnerships in our local communities."

Howard Schultz, Starbucks' executive chairman and former CEO, who guided the company's explosive growth, added, "The company's founding values are based on humanity and inclusion. We will learn from our mistakes and reaffirm our commitment to creating a safe and welcoming environment for every customer."

NPR's Gene Demby, a Philadelphia native who hosts the Code Switch podcast, explains that "out-of-place policing," when "police engage with people who don't look like they belong there," is "usually just racial profiling masquerading as spatial profiling."

He said it can be hard to separate where exactly the racial bias lies in this arrest — with an employee, with Starbucks or with the police.

"I actually called up Phillip Atiba Goff, who is the president of the Center for Policing Equity," Gene says. "And he said that it's really hard to partition police bias from public bias because black men are so broadly perceived as threats, and that perception is treated as reasonable by the police. ... If you think a black person is violent or dangerous or out of place, he says that your bias will have all the structural support. The police will defer to your suspicions.

"And there's no consequences for anyone's biases here ... not the Starbucks employee, not the police officers. The only consequences fall on the two men who are arrested and spent hours behind bars."

Gene notes that it's not clear whether Starbucks has a consistent policy about the use of bathrooms by people who haven't purchased anything. "The Starbucks official policy, whether it exists or not, is sort of immaterial to this conversation in a lot of ways," he says. "And it is because these questions become questions of discretion of individual people, that's where bias can creep in."

The closure and the training will affect more than 8,000 company-owned stores; licensed stores, such as those inside Target stores or other larger businesses, will get access to the training materials after it is over, Starbucks says.

Starbucks Executive Weighs In On Arrests Of 2 Black Men April 16, 2018

Rosalind Brewer, the COO of Starbucks, spoke with NPR on Monday. She said watching the video of the arrest was painful.

"As an African-American executive myself with a 23-year-old African-American son, it was very difficult to watch. The police should not have been called in this situation. And this is a teachable moment for all of us. And we take full responsibility to make sure that our company remains great," she said. "Unconscious-bias training is critical and top of our list."

A few years ago, the comedian W. Kamau Bell, who is black, was talking to his wife, who is white, at the Elmwood Cafe in Oakland, Calif. An employee tried to get him to leave, saying she thought he was trying to sell something. Bell described the incident in a blog post and an episode of This American Life.

In the aftermath of the Starbucks arrests, Bell emphasized that the situation in the coffee shop was not unique. "Every day black people find themselves in simple situations where suddenly out of nowhere, we are treated like criminals," he wrote in an essay published by CNN.

Bell urged Starbucks not to fire the employees in question but to focus on training — and carry that commitment forward, instead of returning to business as usual after the headlines die down. Bell wrote on CNN:

"This isn't just about a couple of rogue baristas ignoring the employee manual. I'm sure the Starbucks manual says, "DON'T BE RACIST/SEXIST/ABLEIST/TRANSPHOBIC/HOMOPHOBIC/JERKHOLE-IC!" all over it. It has to. Starbucks is a major corporation. But I'm guessing the manual doesn't tell its employees how not to be racist/sexist/ableist/transphobic/homophobic/jerkhole-ic. This is key. I remember how the owner of The Elmwood Cafe told me that he didn't train his employees to be racist. But he didn't have to train [them] to be racist for them to act in racist ways. You have to un-train people. Racism is baked into America's cake. It is the flour, the white, bleached flour.