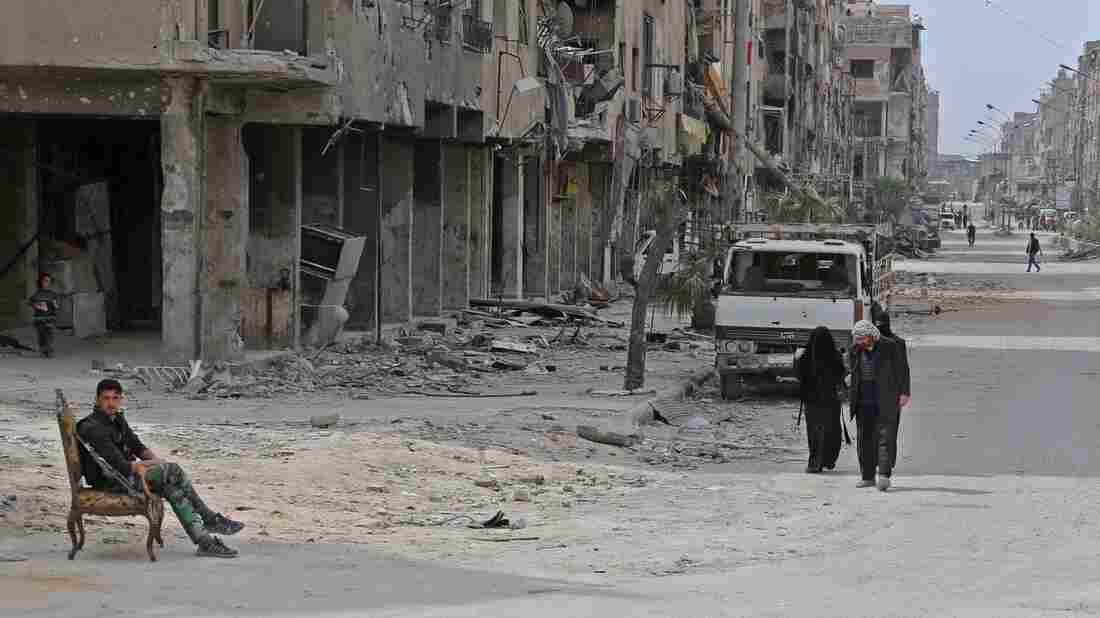 Civilians walk in the formerly rebel-held Syrian town of Douma, on the outskirts of Damascus, on Tuesday. The Syrian army declared that all anti-regime forces have left Eastern Ghouta, following a blistering two-month offensive, including an alleged chemical weapons attack. It's not clear when international inspectors will enter Douma to evaluate the site. AFP/Getty Images hide caption 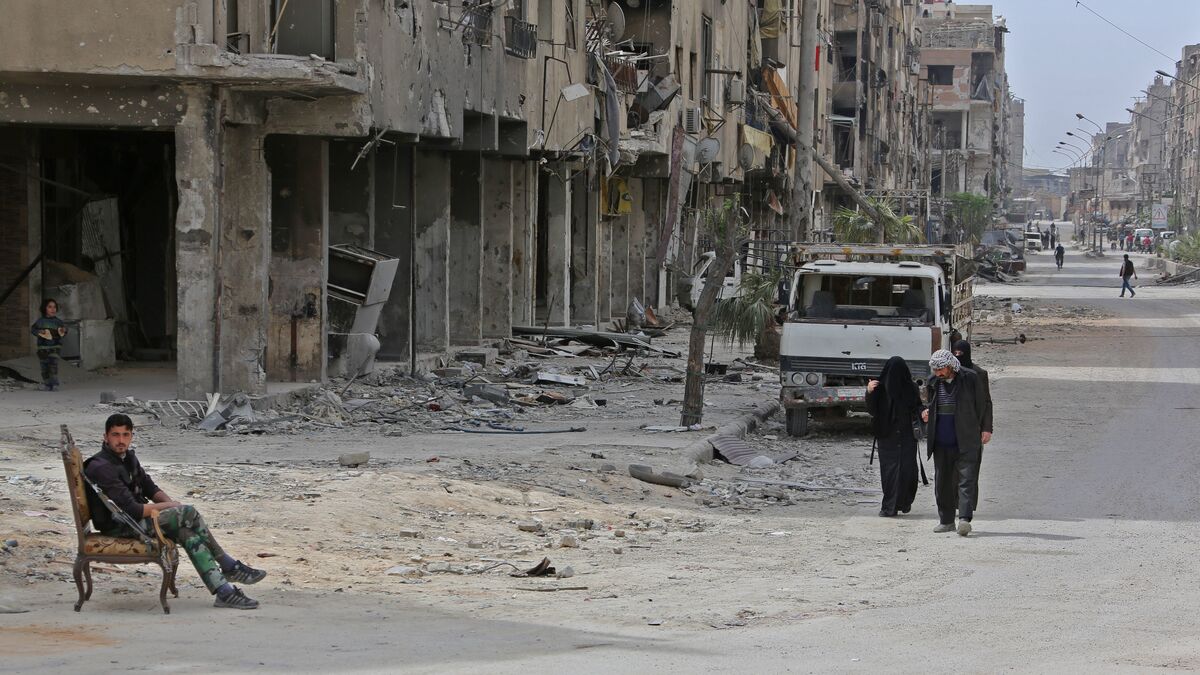 Civilians walk in the formerly rebel-held Syrian town of Douma, on the outskirts of Damascus, on Tuesday. The Syrian army declared that all anti-regime forces have left Eastern Ghouta, following a blistering two-month offensive, including an alleged chemical weapons attack. It's not clear when international inspectors will enter Douma to evaluate the site.

International chemical weapons inspectors have not yet managed to enter the Syrian town of Douma — and it's not clear when they will be able to visit the town, which was the site of a suspected chemical weapons attack on April 7.

Syria and its ally Russia had invited inspectors with the Organisation for the Prohibition of Chemical Weapons to visit the town, but then were accused of blocking them from accessing it for several days. Then Syrian state media claimed on Tuesday that the inspectors had entered the town.

But on Wednesday, OPCW said that's not what happened.

Instead, a U.N. security team entered Douma to "conduct a reconnaissance visit to the sites" ahead of the visit by the inspectors, according to an OPCW statement.

That security team was met with a large crowd at the first inspection site. At the second site, "the team came under small arms fire and an explosive was detonated," OPCW says.

NPR's Ruth Sherlock says that reportedly nobody was injured in the attack. But the arrival of inspectors is now up in the air.

The U.N. will continue to work with Syrian authorities and the Russian military police to "review the security situation," the chemical weapons watchdog group says.

"At present, we do not know when the FFM [fact-finding mission] team can be deployed to Douma," OPCW Director-General Ahmet Uzumcu says in the statement. "This incident again highlights the highly volatile environment in which the FFM is having to work and the security risks our staff are facing."

Last week, in response to the alleged attack, the U.S. and allies launched airstrikes on several targets in Syria.

Syria, which has taken control of Douma from the rebels who held it, has denied responsibility for the attack.

As NPR reported Tuesday, there are concerns that as days pass without inspectors getting access to the site, evidence may be lost — intentionally or unintentionally:

"The U.S. ambassador to the OPCW, Kenneth Ward, expressed Washington's concern that nearly two weeks after the attack, inspectors would find tampering of evidence.

" 'It is our understanding the Russians may have visited the attack site,' Ward said during a meeting Monday at The Hague.

" 'It is our concern that they may have tampered with it with the intent of thwarting the efforts of the OPCW Fact-Finding Mission to conduct an effective investigation,' he said.

"Speaking with the BBC, Russian Foreign Minister Sergey Lavrov denied any interference. 'I can guarantee that Russia has not tampered with the site,' he told the broadcaster.

"Jerry Smith, a former OPCW weapons inspector who worked in Syria in 2013, tells NPR that the passage of time makes inspection more challenging for multiple reasons.

" 'We've had over a week now where people, lots of different people, we don't know who may have traipsed in and out of that,' he says. 'And the other thing is ... if it is a gas attack, a chemical weapons attack, then that material is degrading in the atmosphere. Every day, the chances of getting good hits, good sampling, becomes less and less.' "