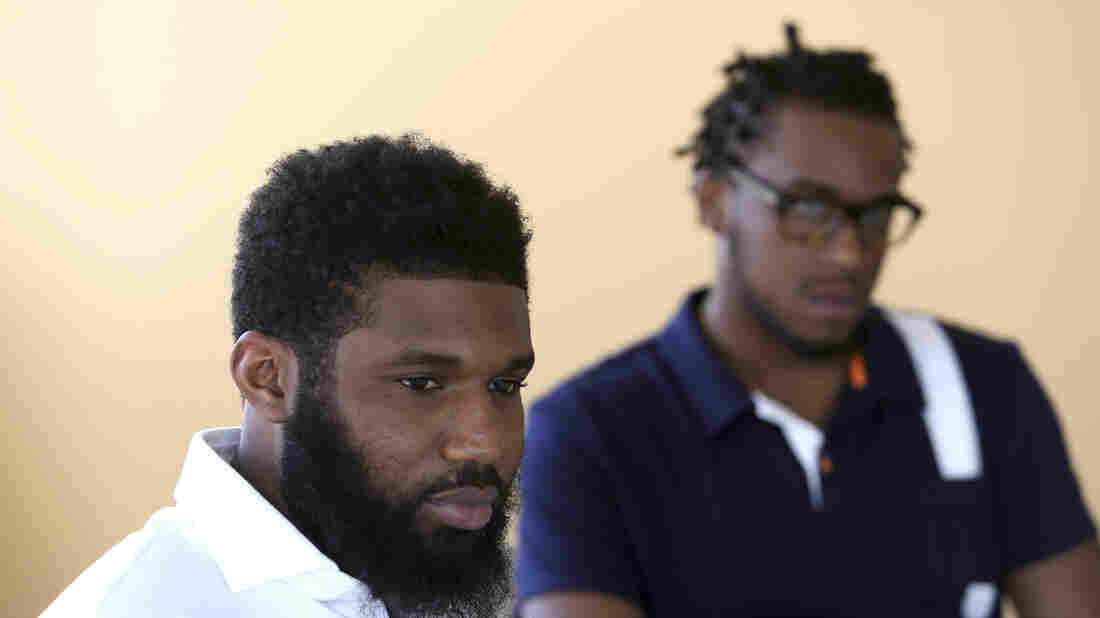 Rashon Nelson (left) and Donte Robinson say they hope their arrest at a Philadelphia Starbucks one week ago helps elicit change and doesn't happen to anyone else. A video of their arrest, viewed 11 million times, has sparked outrage and protest. Jacqueline Larma/AP hide caption 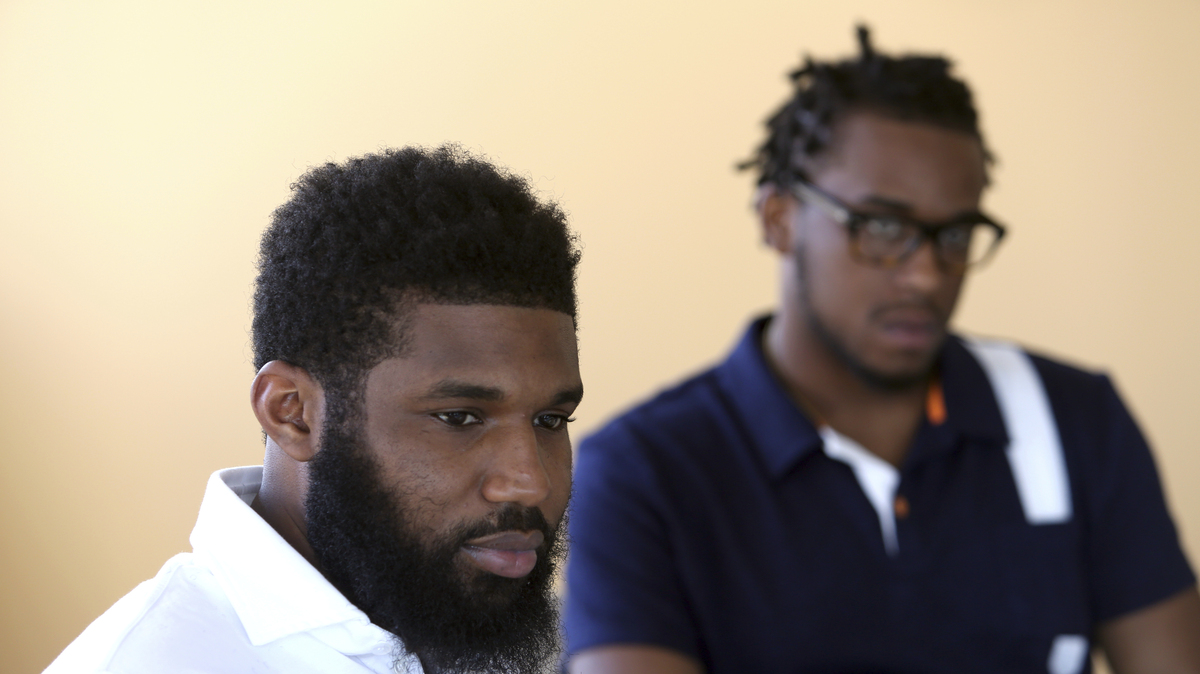 Rashon Nelson (left) and Donte Robinson say they hope their arrest at a Philadelphia Starbucks one week ago helps elicit change and doesn't happen to anyone else. A video of their arrest, viewed 11 million times, has sparked outrage and protest.

What began as an opportunity to talk real estate at a Philadelphia coffee shop and ended in the arrest of two black men has launched a week of outraged protest, accusations of racial discrimination and vows from Starbucks to do better. And now those men are speaking out for the first time about what it has all meant to them.

Donte Robinson and Rashon Nelson — the 23-year-olds at the center of it all — say they just hope the incident will lead to change.

Richard Ross struck a conciliatory note at a news conference, saying, "I fully acknowledge that I played a significant role in making [the incident] worse."

Last weekend, Ross had said in a video statement that "these officers did absolutely nothing wrong" and that they were legally obligated to respond to Starbucks' report that the men were trespassing. But on Thursday, he said, "I should have said the officers acted within the scope of the law, and not that they didn't do anything wrong."

When he saw police entering the Starbucks last Thursday, Robinson told ABC's Good Morning America, it did not register that he and his companion might be the ones in trouble.

"They can't be here for us," he said he was thinking as he and Nelson awaited a third man for a scheduled meeting.

Nelson said that he had asked to use the restroom and that an employee informed him it was for paying customers only.

But the manager didn't.

A police report states the men cursed at the manager after she told them bathrooms are for customers only.

She called 911 to report that the men were not making a purchase and were refusing to leave.

It reportedly took just two minutes from their arrival to her call for help.

Last weekend, Ross said officers had asked the men "politely to leave" three times because Starbucks said they were trespassing. After the men refused, Ross said, the police made the arrest.

"It didn't really hit me what was going on — that it was real — until I'm being double-locked and my hands [are] behind my back," Robinson told ABC News.

In a separate interview with The Associated Press, Nelson said that he was worried about the situation spinning out of control and that he might possibly die.

"Anytime I'm encountered by cops, I can honestly say it's a thought that runs through my mind," Nelson said. "You never know what's going to happen."

The AP reports that the men — who have been best friends since the fourth grade — had never been arrested before. And Robinson said he had been a customer at the Rittenhouse Square Starbucks since he was 15.

The men spent several hours in custody before being released.

ABC's Robin Roberts asked the men how they would respond to those who say they violated Starbucks policy by not buying anything.

"I understand that — rules are rules," Robinson said. "But what's right is right and what's wrong is wrong."

Starbucks CEO Kevin Johnson — who met with the men on Monday — says the company was in the wrong.

"Our practices and training led to a bad outcome — the basis for the call to the Philadelphia police department was wrong," Johnson said in a statement Saturday.

Ross, the police commissioner, outlined the confusion over just what those practices are or whether an official company policy about making a purchase exists or is known.

"While this is apparently a well-known fact with Starbucks customers, not everyone is aware that people spend long hours in Starbucks and aren't necessarily expected to make a purchase," he said, adding that he apologizes to Nelson and Robinson.

Ross said that he had initially misunderstood that business model and that it is "reasonable to believe" the arresting officers did not know about it either.

A Starbucks spokesperson told The Washington Post, "In this particular store, the guidelines were that partners must ask unpaying customers to leave the store, and police were to be called if they refused."

But for its part, Starbucks has been focusing its messaging on racial bias rather than on store policy.

Starbucks says it will close its 8,000-plus stores in the U.S. for the afternoon on May 29 to conduct "racial-bias education geared toward preventing discrimination in our stores."

Robinson told ABC News that he hopes the situation can serve as a lesson for "young men to not be traumatized by this and instead [be] motivated, inspired."

Nelson said he wants to "help people understand it's not just a black people thing; it's a people thing."

Ross, who is black, said, "The issue of race in this situation is not lost on me," adding that he shouldn't be the one making it worse.

He said Philadelphia police have now come up with an unspecified new policy "that guides our officers on how to deal with similar situations."