Accessibility links
New Study Says Ancient Humans Hunted Big Mammals To Extinction : The Two-Way As humans spread around the globe, other big mammals vanished. Researchers believe it's because they were tasty. 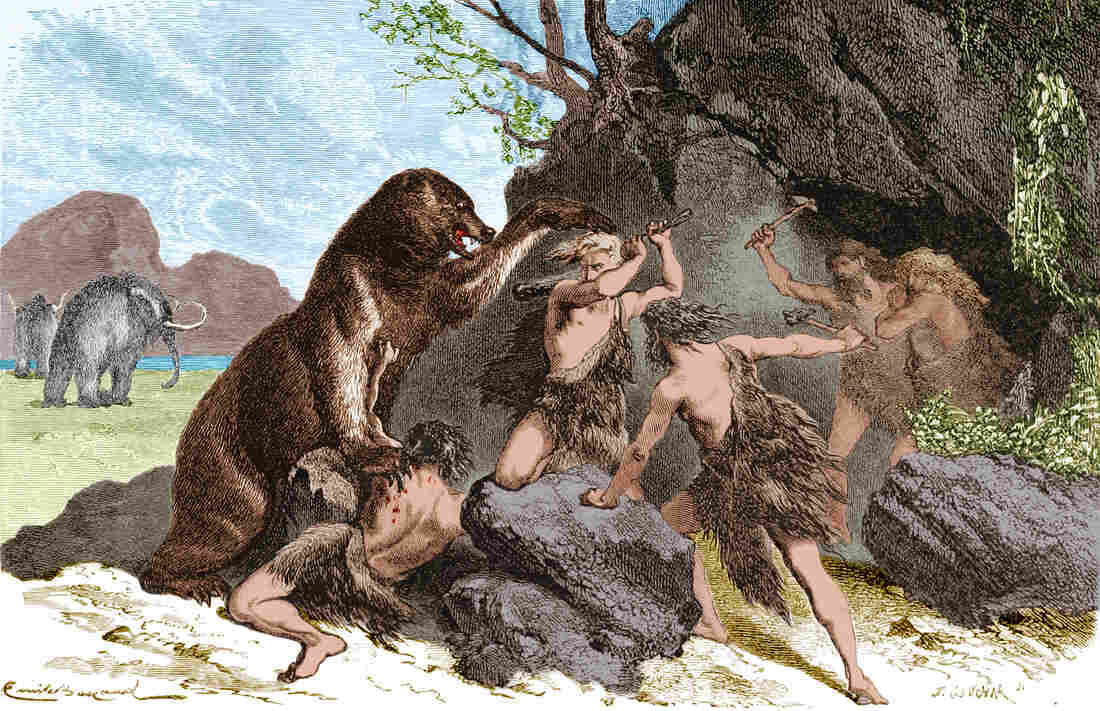 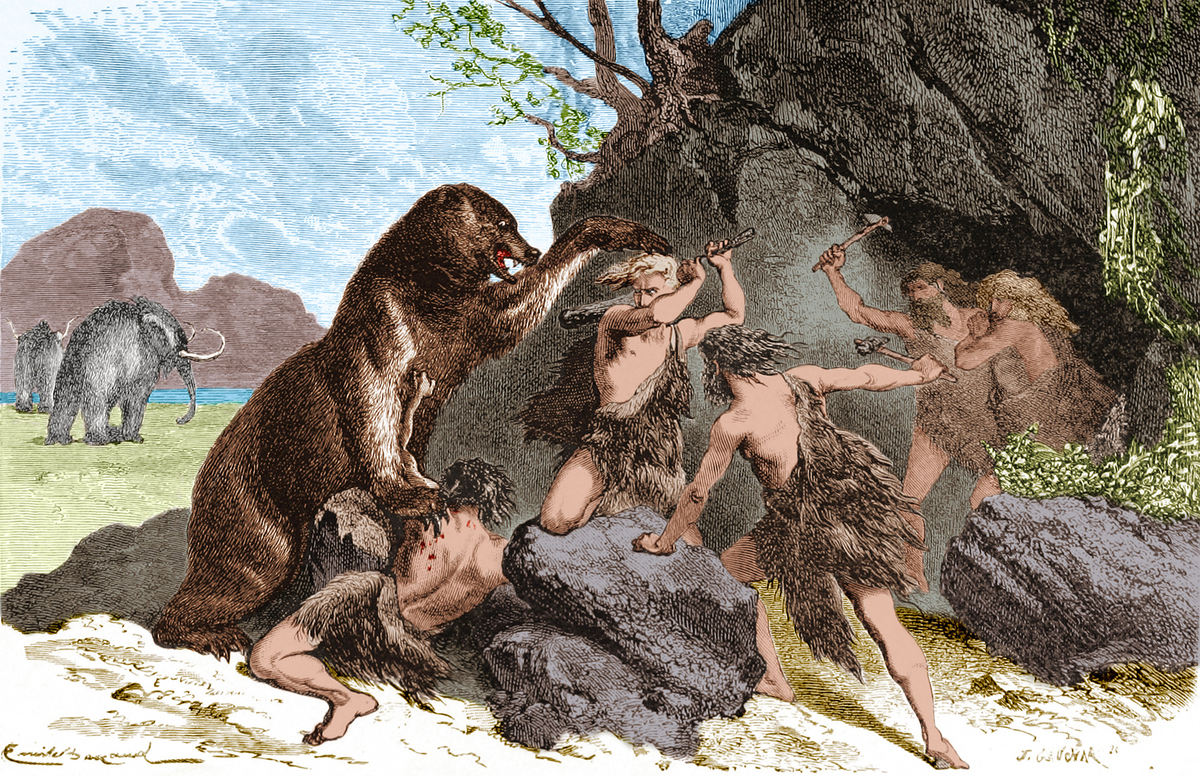 An illustration from 1870 shows Prehistoric men using wooden clubs and stone axe to fend off an attacks by a large cave bear. The cave bear (Ursus spelaeus) was a species of bear that lived in Europe during the Pleistocene and became extinct at the beginning of the Last Glacial Maximum, about 27,500 years ago. Mammoths can be seen in the background.

Over the past 125,000 years, the average size of mammals on the Earth has shrunk. And humans are to blame.

That's the conclusion of a new study of the fossil record by paleo-biologist Felisa Smith of the University of New Mexico.

Smith studied fossils going back 65 million years, when dinosaurs died and mammals came into their own. Many of the early mammals went on to get big. Among the giant creatures: "Llamas and camels and sloths and five species of pronghorn [antelope] actually," she says, "and certainly mammoths. And then lots of really cool predators, like Arctodus, the short faced bear." The short-faced bear stood 11 feet tall, about the shoulder height of some species of ancient camel.

And that was just North America.

Being big was just as successful as being small, and had some advantages when it came to surviving big predators. "Taken as a whole, over 65 million years, being large did not increase mammals' extinction risk. But it did when humans were involved," Smith found.

Looking back over the most recent 125,000 years of the fossil record, Smith found that when humans arrived someplace, the rate of extinction for big mammals rose. She says it basically came down to hunger. "Certainly humans exploit large game," she says, "probably because they are tasty"--and because a bigger animal makes for a bigger meal.

But humans did other things besides hunting that hastened the disappearance of big mammals. They burned forests and grasslands that big mammals used. They competed with the big carnivores for game. They brought dogs with them that made them better hunters.

Over time, Smith says, the downsizing of mammals affected the environment in ways you might not imagine--for example, in the erosion of the land. "When a large animal walks up a hill," Smith explains, "it zig-zags a lot, whereas a small animal walks up more directly, and that has an impact because water follows those game trails down, so erosion and vegetation and what-not are affected by that."

Smith's research appears in the journal Science. Fellow paleo-biologist Rebecca Terry at Oregon State University says the new study shows that human influence on mammal size started in Africa, where humans first evolved. The effect on mammals then followed their travels. "And eventually the spread of modern humans, Homo sapiens, (moved) into the New World," she says, "and at that point pretty advanced weaponry was definitely present, and the extinctions in the New World in North America and South America were really extreme as a result."

Indeed, the Americas had been the last holdout for really big mammals, since they were the last populated by humans.

We still have lots of furry little mammals on the planet. But the pattern is clear: 11,000 years ago, the average mass of a non-human mammal in North America was about 200 pounds. Now it's about 15 pounds. And the researchers say they're getting even smaller.