Accessibility links
Kauai Struggles With Severe Flooding, As More Rain Is In The Forecast : The Two-Way A storm dropped record rainfall on the island this past weekend. Residents are assessing the damage — and bracing for even more rain. There's a flash flood watch in place for all of Hawaii.

Kauai Struggles With Severe Flooding, As More Rain Is In The Forecast

Kauai Struggles With Severe Flooding, As More Rain Is In The Forecast

The Hawaiian island of Kauai is struggling to recover from severe flooding caused by a deluge last weekend — and bracing for still more rain forecast over the next few days.

A flash flood watch is in place for all of Hawaii. Rain is expected to begin again on Thursday night.

"Even though widespread heavy rainfall is not expected on Kauai, given the high levels of saturation from recent rainfall, any additional moderate rain falling for an extended period of time could quickly result in flooding problems," the National Weather Service notes.

On Saturday and Sunday, Kauai experienced a record-setting storm, with the NWS describing the rate of rainfall as "unprecedented."

"A gauge in Hanalei measured more than 28 inches before it "stopped reporting," the NWS says. That was a few fractions of an inch under the 24-hour rainfall record. But heavy rain continued after the gauge went silent, causing the NWS to conclude "it it is highly likely that this record was broken." Another rain gauge also hit a record.

The Washington Post's Capital Weather Gang puts this in perspective:

"Kauai is, of course, no stranger to rain. It is one of the rainiest places on Earth, with the 5,148-foot-tall Mount Waialeale receiving more than 400 inches of rain annually. Hanalei, where the 24-hour rainfall record was set, averages 78 inches per year.

"Still, the Saturday-Sunday inundation was far too much for Kauai to handle."

Town and Country magazine collected some before and after pictures showing the effect of the torrential rain.

"By Monday, those heavy rains slowed, allowing rescue teams to begin to assess the damage and evacuate scores of residents and visitors — more than 150 by helicopter alone.

"The north shore of Kauai was particularly hard-hit by flooding and mudslides.

"Parts of roads from Hanalei west to the Napali Coast have been washed out, shutting down several state parks indefinitely." 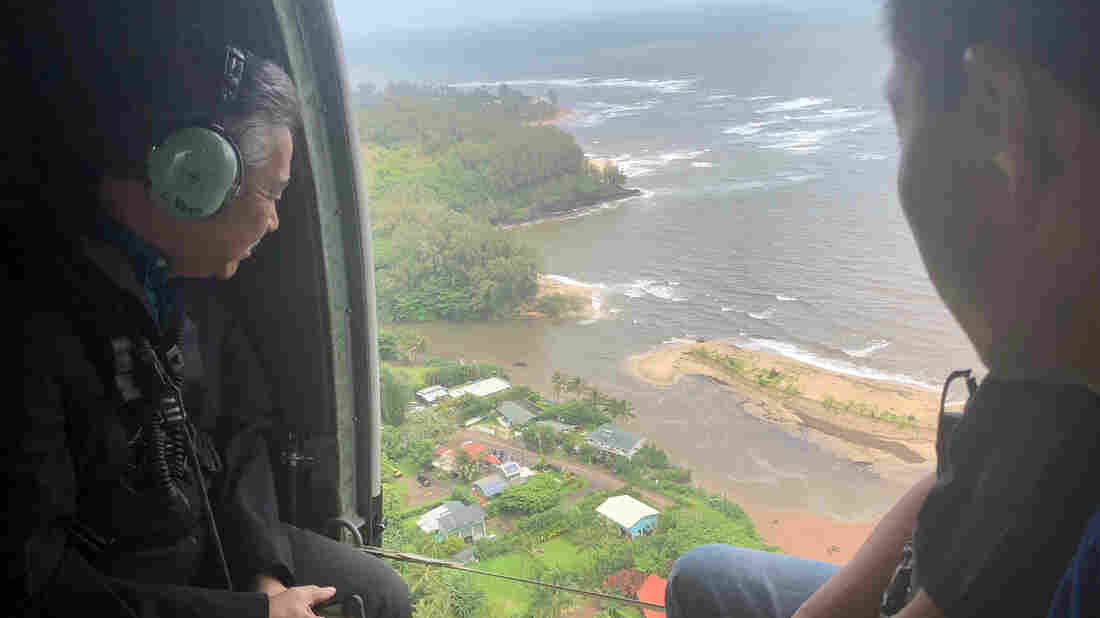 Hawaii Gov. David Ige (left) flies over the flood-damaged areas of the island of Kauai on Monday, assessing the damage and rescue needs on the island. Hawaii is bracing for even more rain over the next two days Courtesy of Hawaii Governor's Office via AP hide caption 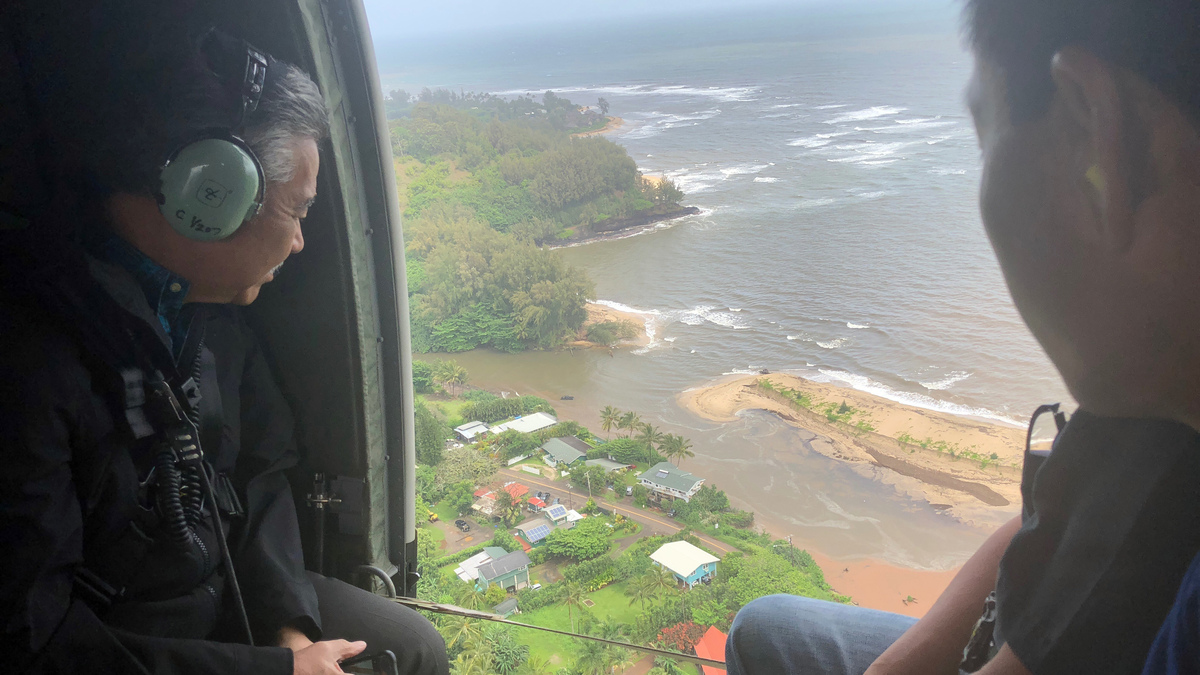 Hawaii Gov. David Ige (left) flies over the flood-damaged areas of the island of Kauai on Monday, assessing the damage and rescue needs on the island. Hawaii is bracing for even more rain over the next two days

He has directed the state's tax department to provide an extension on state filing deadlines for flood victims. State lawmakers are also appropriating $100 million for relief efforts on Kauai, as well as $25 million more for the rest of the state, The Associated Press reports.

Evacuations are continuing. As of late Wednesday, according to Kauai Mayor Bernard Carvalho Jr., more than 425 people had been evacuated by air.

Carvalho urged residents to pay attention to the flood watch in place for Thursday and Friday.

"As we anticipate the possibility of heavy rains reaching our island once again, I'd like to remind the public to remain vigilant and stay informed on any updates," he wrote.