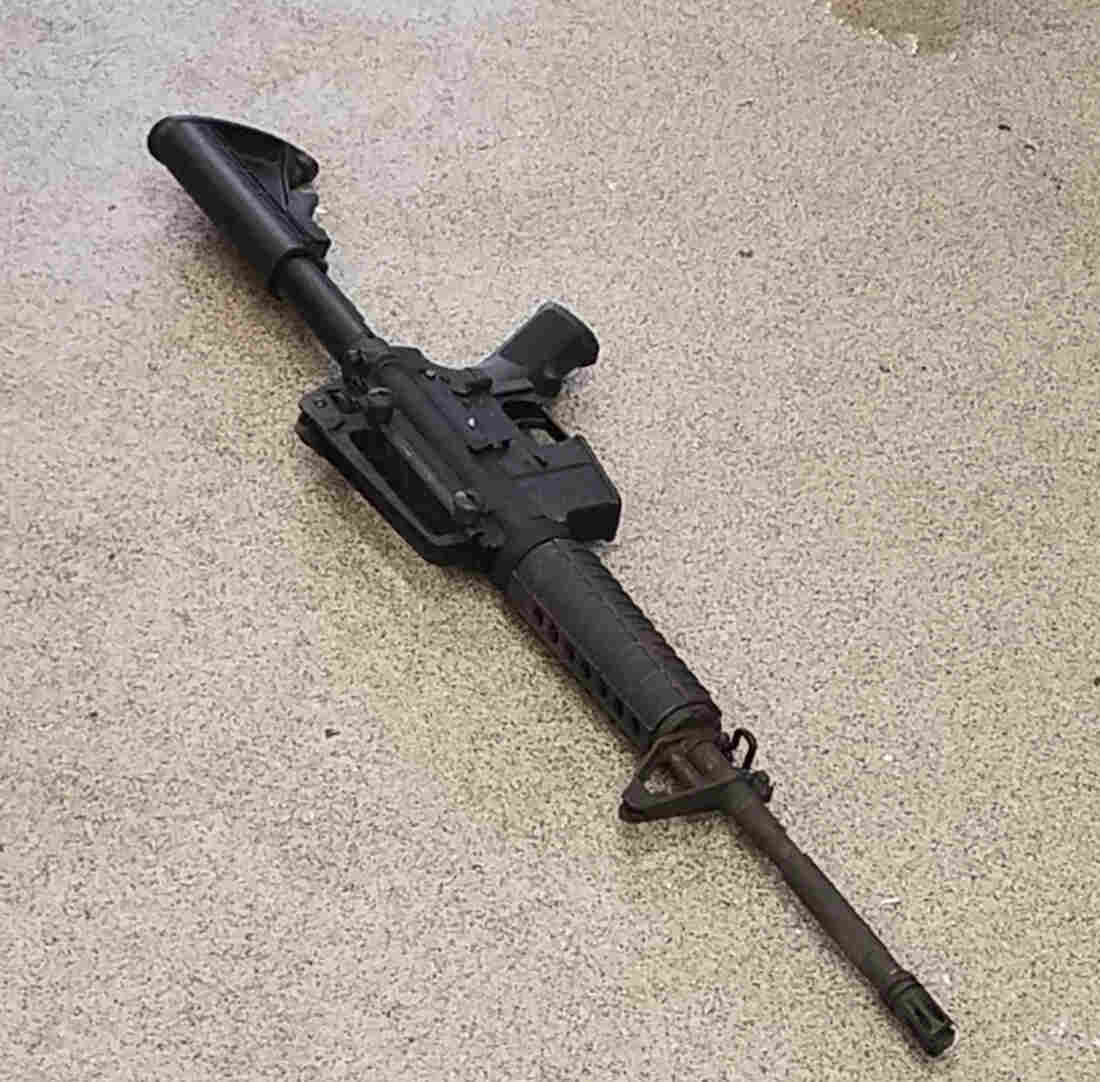 A Metro Nashville Police Department photo shows the rifle used in the deadly shooting at a Waffle House on Sunday in the Antioch neighborhood of Nashville, Tenn. AP hide caption 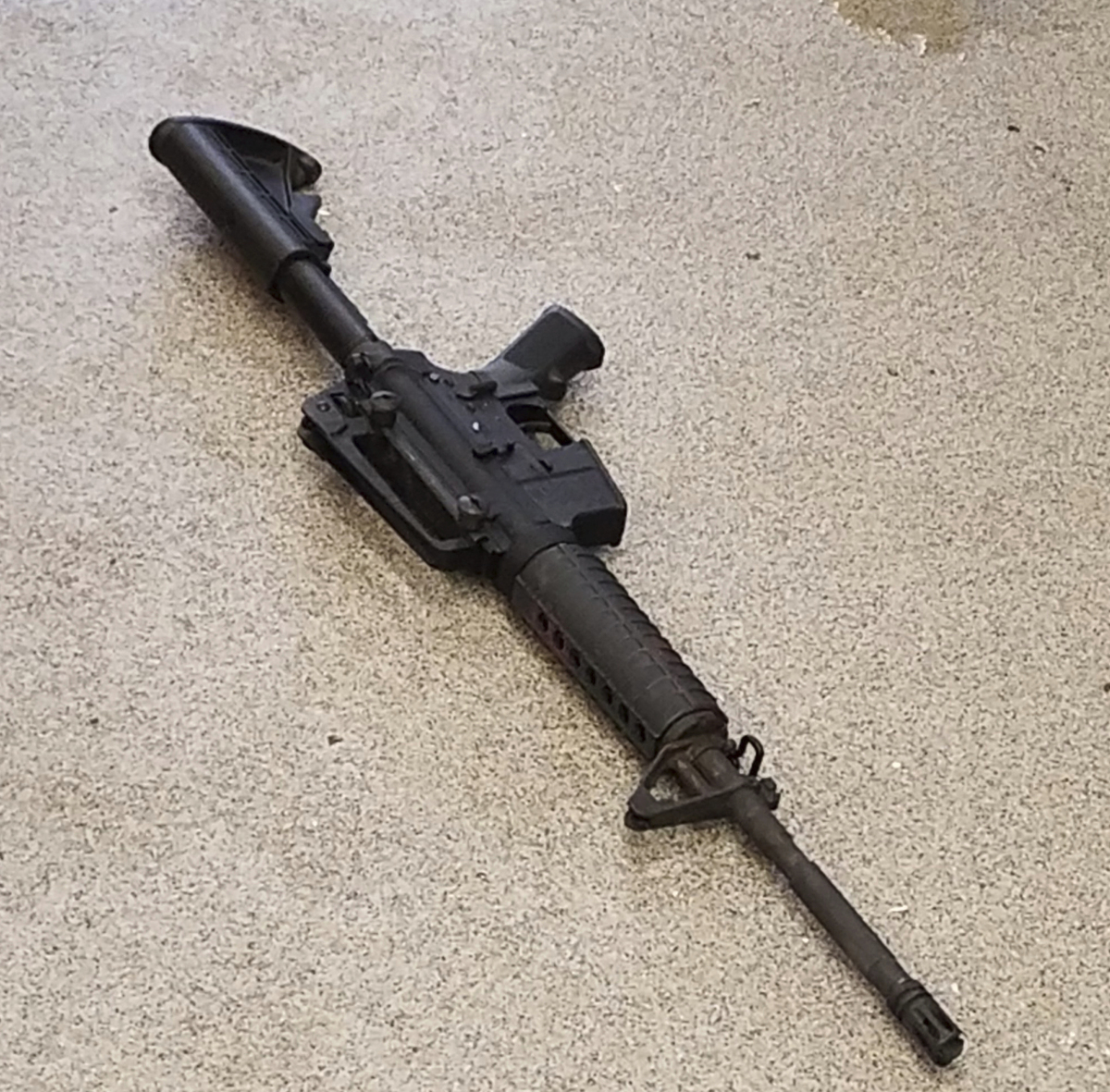 A Metro Nashville Police Department photo shows the rifle used in the deadly shooting at a Waffle House on Sunday in the Antioch neighborhood of Nashville, Tenn.

Nashville Police are warning residents to keep their doors locked and their eyes open for a partially nude man following a shooting early Sunday morning that left four people dead.

There is reason to believe, police say, that the suspect at large is carrying at least one weapon that was not found during a search of the gunman's home.

"One of his guns, a pistol, remains unaccounted for," Metro Nashville Police tweeted Sunday evening.

Search continuing for accused quadruple murderer Travis Reinking. More than 80 MNPD officers are joined this evening by our partners from the THP, FBI & ATF. See Reinking? Please call 615-862-8600 immediately. One of his guns, a pistol, remains unaccounted for. pic.twitter.com/RELswfuFc8

A man wearing only a green jacket shot three people dead at a Waffle House. One person later died at a hospital where two others are being treated for injuries. Police say the suspect fled on foot, and is still on the loose. Eye witnesses tell police he stripped his jacket off near the restaurant, went back to his nearby apartment and put on a pair of pants. He was last seen wearing only black pants.

The police have identified the suspect as 29-year-old Travis Reinking of Morton, Ill. According to Metro Nashville Police spokesperson Don Aaron, Reinking drove his pickup truck to the restaurant in Antioch, Tenn., and shot people talking in the parking lot, then continued on and opened fire inside.

When the shooting momentarily stopped, a Waffle House customer took advantage of the moment. James Shaw Jr. told reporters, "At that time I made up my mind ... that he was going to have to work to kill me. When the gun jammed or whatever happened, I hit him with the swivel door." Shaw then wrestled the gun away, and threw it behind the counter — prompting the gunman to leave.

This is 29 year old James Shaw. He tackled and disarmed the suspected white supremacist terrorist Travis Reinking who shot up a Waffle House in Antioch Tn. This is a real American hero. He saved many lives pic.twitter.com/nrEULqh89O

"He is the hero here, and no doubt he saved many lives," Aaron said.

The Tennessee Bureau of Investigation has added Reinking to its "Top 10 Most Wanted" list. Reinking was arrested by the U.S. Secret Service for being in a restricted area near the White House in July, 2017. He was subsequently released, Aaron said. Reinking's state firearm authorization was also revoked at the request of the FBI, and seized by Tazewell authorities in Illinois. Four of the guns seized were given to Reinking's father who, Aaron said, admitted to giving them back to his son. One of the previously confiscated firearms, the AR-15 was used in the shooting.

This is a very sad day for the Waffle House family. We ask for everyone to keep the victims and their families in their thoughts and prayers.

Waffle House called it a sad day for the restaurant's family.

It’s a tragic day for our city anytime people lose their lives at the hands of a gunman. My heart goes out to the families & friends of every person who was killed or wounded in this morning’s shooting. I know all of their lives will be forever changed by this devastating crime.

Adding in a follow-up tweet, "There's clearly more to be said about these circumstances, but for now I ask Nashville to pray for and rally around these victims."