Accessibility links
Salah Abdeslam: Paris Attack Suspect Gets 20-Year Sentence In Belgium : The Two-Way Abdeslam still faces trial over the 2015 Paris attacks. But a Belgian court punished him for attempted terrorist murder, related to the shootout that ended his time on the run in 2016. 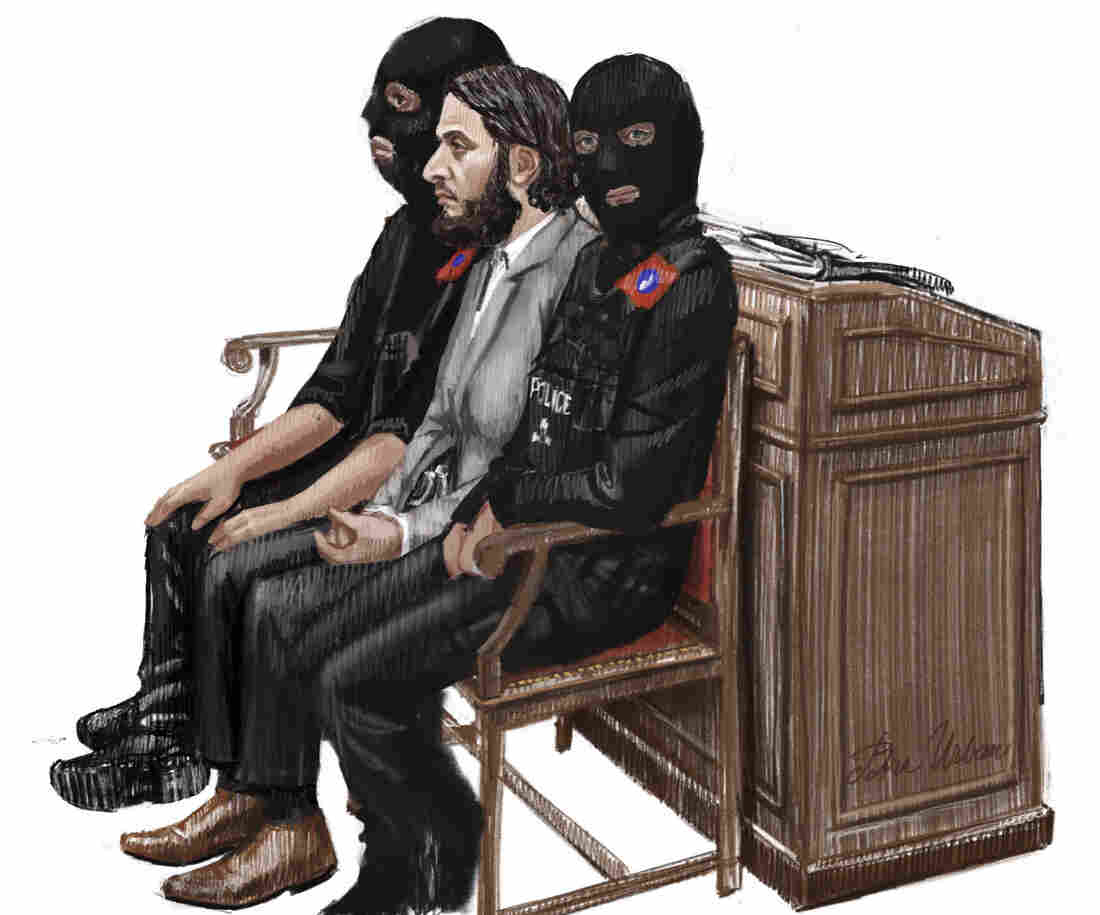 In this courtroom sketch, Salah Abdeslam (center) sits between two police officers at the Brussels Justice Palace in February. He was sentenced Monday to 20 years in prison over charges related to a shootout when he resisted arrest months after the 2015 Paris attacks. Petra Urban/AP hide caption

Salah Abdeslam still faces trial over the 2015 Paris attacks, but a Belgian court sentenced him to 20 years in prison on Monday over charges related to his shootout with police when he resisted arrest in Brussels months after the deadly violence in Paris.

Abdeslam, 28, was found guilty of attempted terrorist murder and illegal possession of firearms after attacking the police officers who found him and two other suspects hiding out in a Brussels apartment.

Months earlier, Abdeslam had become the subject of a manhunt as the only known survivor of the Islamic State terror cell that carried out the suicide bombings and mass shootings on Nov. 13, 2015, that killed at least 130 people — many of them at the Bataclan concert hall.

Three Belgian officers were wounded and one suspect was killed in the shootout that flushed Abdeslam from his hiding place. He was arrested a few days later in the immigrant neighborhood of Molenbeek.

The Palais de Justice in Brussels rendered its verdict on Abdeslam and an accomplice, Sofien Ayari, on Monday. Both of them received 20-year sentences.

The Belgian trial began more than two months ago, when Abdeslam refused to stand and said that he would not answer any questions during the proceedings.

"Salah Abdeslam is not attending the court in Brussels," reports Belgian media outlet Flanders News. "He has chosen to remain in his jail cell outside Paris where he is awaiting trial in connection with the Paris attacks."

In France, the trial for Abdeslam regarding the Paris attacks isn't expected to begin for months.