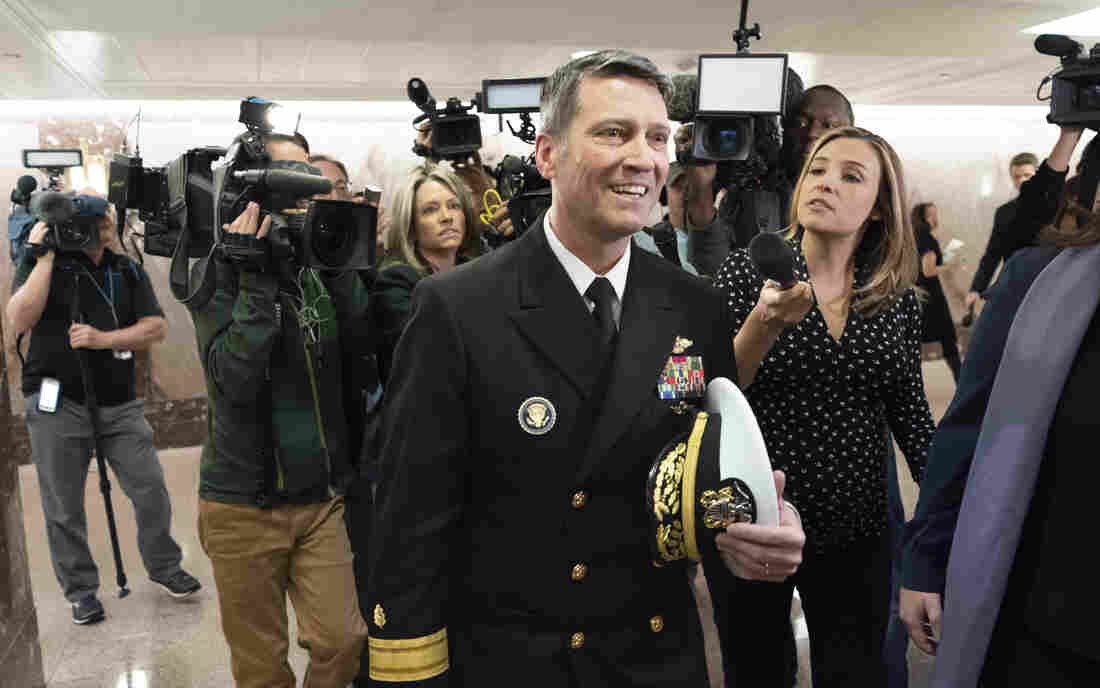 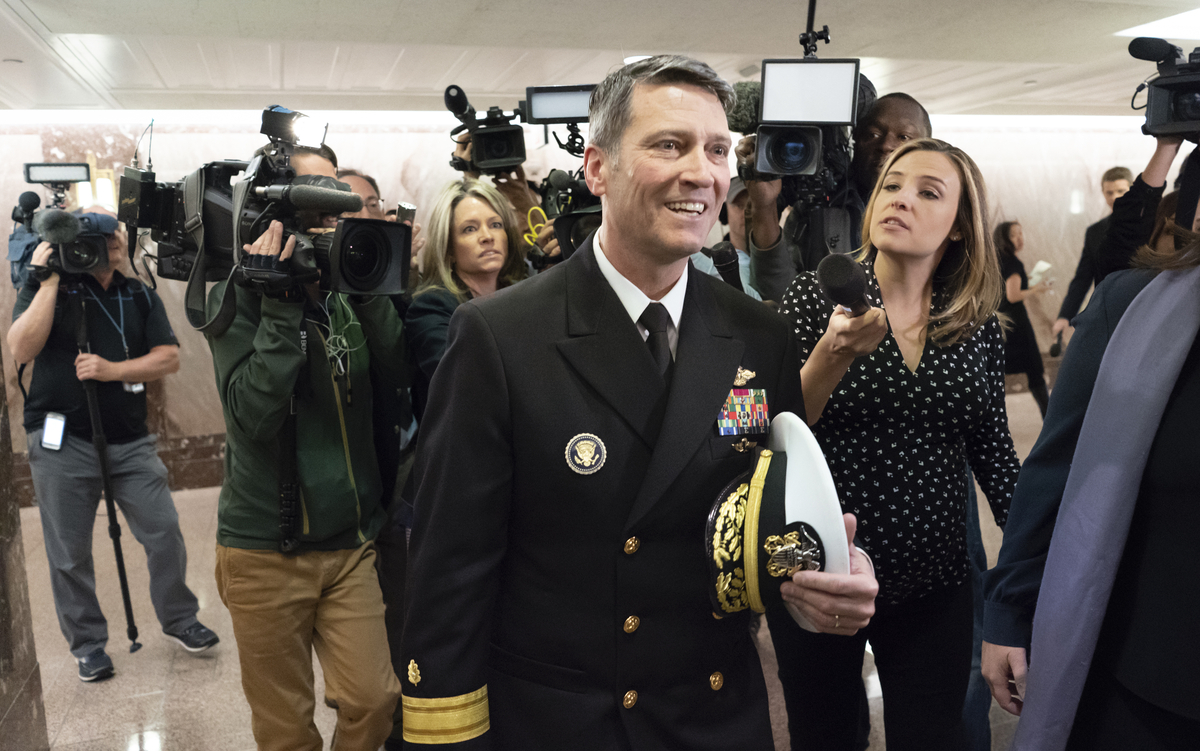 More than 20 military employees have shared concerns about Rear Adm. Ronny Jackson, who was on Capitol Hill on Tuesday, with members and staff of the Senate Veterans' Affairs Committee, said the panel's top Democrat, Jon Tester.

Rear Adm. Ronny Jackson, President Trump's pick to lead the Veterans Affairs Department, has been accused of creating a hostile work environment, drinking while on duty and improperly prescribing drugs to staff during his time as White House doctor to two administrations, according to Montana Sen. Jon Tester.

Tester, the top Democrat on the Senate Veterans' Affairs Committee, detailed the allegations Tuesday in an interview with NPR's All Things Considered.

"All I can tell you is we didn't initiate this discussion," Tester told host Ari Shapiro. "This discussion came when we were notified by folks who work with Adm. Jackson, folks in the military."

Tester said more than 20 military employees disclosed the as-yet-unsubstantiated allegations to senators ahead of a hearing to debate his nomination to lead the VA. That hearing was indefinitely postponed to allow further investigation by the committee.

The allegations largely surround Jackson's conduct while on overseas trips. "We were told stories where he was repeatedly drunk while on duty where his main job was to take care of the most powerful man in the world," Tester said, noting the allegations reach back to the Obama administration. "That's not acceptable."

Sen. Jerry Moran, a Kansas Republican on the Veterans' Affairs Committee, has said Jackson denied ever having a drink while on duty.

"Most of them are the ones that make you want to sleep and then make you wake up," Tester said. "These are basically doled out, and by the way, we had 20 military folks and retired military folks tell us these stories, these were doled out on overseas trips where there are a lot of time zone changes."

The detailed allegations came hours after Trump cast doubt on whether Jackson should remain the nominee for secretary of veterans affairs but said the decision was up to Jackson.

"It's his decision," Trump said during a bilateral news conference with French President Emmanuel Macron.

I really don't think personally he should do it, but it's totally his — I would stand behind him — totally his decision

President Trump on whether Ronny Jackson should withdraw from consideration

Trump said that if he were Jackson, "I wouldn't do it. I wouldn't do it. What does he need it for? To be abused by a bunch of politicians that aren't thinking nicely about our country? I really don't think personally he should do it, but it's totally his — I would stand behind him — totally his decision."

Trump called Jackson "one of the finest people that I have met." (In fact, at one point, Trump remarked that "actually in many ways, I'd love to be him.")

He said multiple times that he asked Jackson on Tuesday, "What do you need this for?"

But Trump left the next move up to Jackson. "It's totally his decision," the president said, blaming Democratic obstruction and scrutiny.

Jackson showed no indication of withdrawing Tuesday. He was on Capitol Hill, making the rounds with key senators on the committee. Reporters caught up with him on his way to Moran's office.

Asked whether he "categorically denied" the allegations against him, he said, "I'm looking forward to the hearings, so we can sit down and I can explain everything to everyone and answer all the senators' questions."

"We take very seriously our constitutional duty to thoroughly and carefully vet each nominee sent to the Senate for confirmation," the pair wrote. "We will continue looking into these serious allegations and have requested additional information from the White House to enable the committee to conduct a full review."

Jackson himself, though, said there was no inspector general report about the allegations. "No, there was not," he said before brushing off questions about whether he would withdraw.

Earlier Tuesday, two Democrats on the Senate Veterans' Affairs Committee discussed how and when the committee learned of the allegations of inappropriate behavior in the workplace by Jackson.

"The allegations have come from people that are in the military, or used to be in the military, former military people who came forward. Some I assume approached committee members, others engaged or gave other names that committee staff could call. All of them were willing to talk," said Sen. Sherrod Brown, D-Ohio, who said that he had not spoken to anyone directly who came forward but that committee staff has and that those conversations began last week.

Brown characterized those speaking to the committee as "people that work with him, many that like him. It's not a question of liking him; it's a question of what he's done in the past that would have an impact on this job."

He declined to comment on the substance of the allegations, but added, "I will say it's clear the president's people didn't make very many of these calls."

Vetting failures unfortunately are symptomatic of a broader failure [of the Trump administration] to properly review and scrutinize the records of its nominees.

Sen. Richard Blumenthal, D-Conn., likewise said that the allegations were brought to the committee's attention but that none of the accounts had been corroborated. The committee has not received any supplemental or verifying documents, like inspector general reports.

"Vetting failures unfortunately are symptomatic of a broader failure [of the Trump administration] to properly review and scrutinize the records of its nominees," Blumenthal said. "The viability of his nomination depends on the administration's ability to provide answers to questions quickly, thoroughly, accurately and honestly."

Jackson currently serves as White House physician. He defused doubts about the health and fitness of Trump in January, describing the president's medical condition in emphatically glowing terms. Jackson is a former combat surgeon who served with Navy bomb disposal units and instructed underwater salvage teams.

"Admiral Jackson has been on the front lines of deadly combat and saved the lives of many others in service to this country," said Hogan Gidley, deputy White House press secretary, noting that he served both Republican and Democratic presidents "and been praised by them all. Admiral Jackson's record of strong, decisive leadership is exactly what's needed at the VA to ensure our veterans receive the benefits they deserve."

Trump picked Jackson to succeed David Shulkin, who was forced to resign as VA secretary after an inspector general's report uncovered inappropriate expenses.

The allegations about Jackson add to worries from senators in both parties that Jackson is not qualified to run the veterans agency. Several senators have questioned whether Jackson has the managerial experience to lead a department with 360,000 employees, responsible for the care of some 9 million veterans. Jackson currently oversees a staff of several dozen in the White House Medical Unit.

Jackson is also a blank slate on one of the major policy questions facing the VA: how large a role the private sector should play in veterans' health care. Major veterans service organizations are concerned he might oversee a push toward privatization.

"So, the president is putting forward nominees without appropriate vetting, and it's our job to vet, and we will not be rushed through, particularly when this administration has such a poor record of looking at the qualifications and the problems that each nominee brings," said Schumer.

News of the postponement came a day after nomination of CIA Director Mike Pompeo, another Trump pick who had appeared in peril, cleared a key Senate committee on the path to becoming the next secretary of state.