Accessibility links
Newsroom To 'Chicago Tribune': With 85 Percent Backing, We Have Votes For Union : The Two-Way Tribune journalists give corporate owner Tronc a day to recognize the union voluntarily. Otherwise, they say they will force a federal vote that "will result overwhelmingly in our favor." 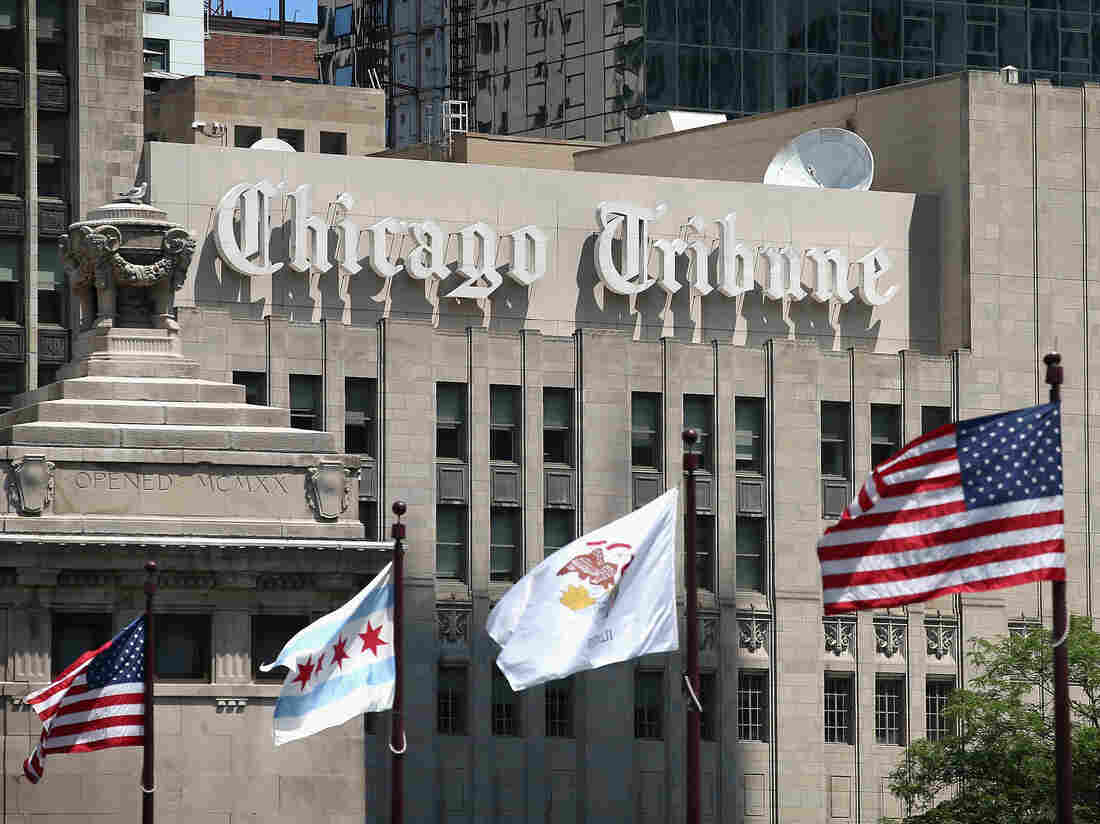 Organizers of a newsroom union at the Chicago Tribune have given the Tribune's parent company, Tronc, a day to voluntarily recognize the guild and start to negotiate a contract. Scott Olson/Getty Images hide caption 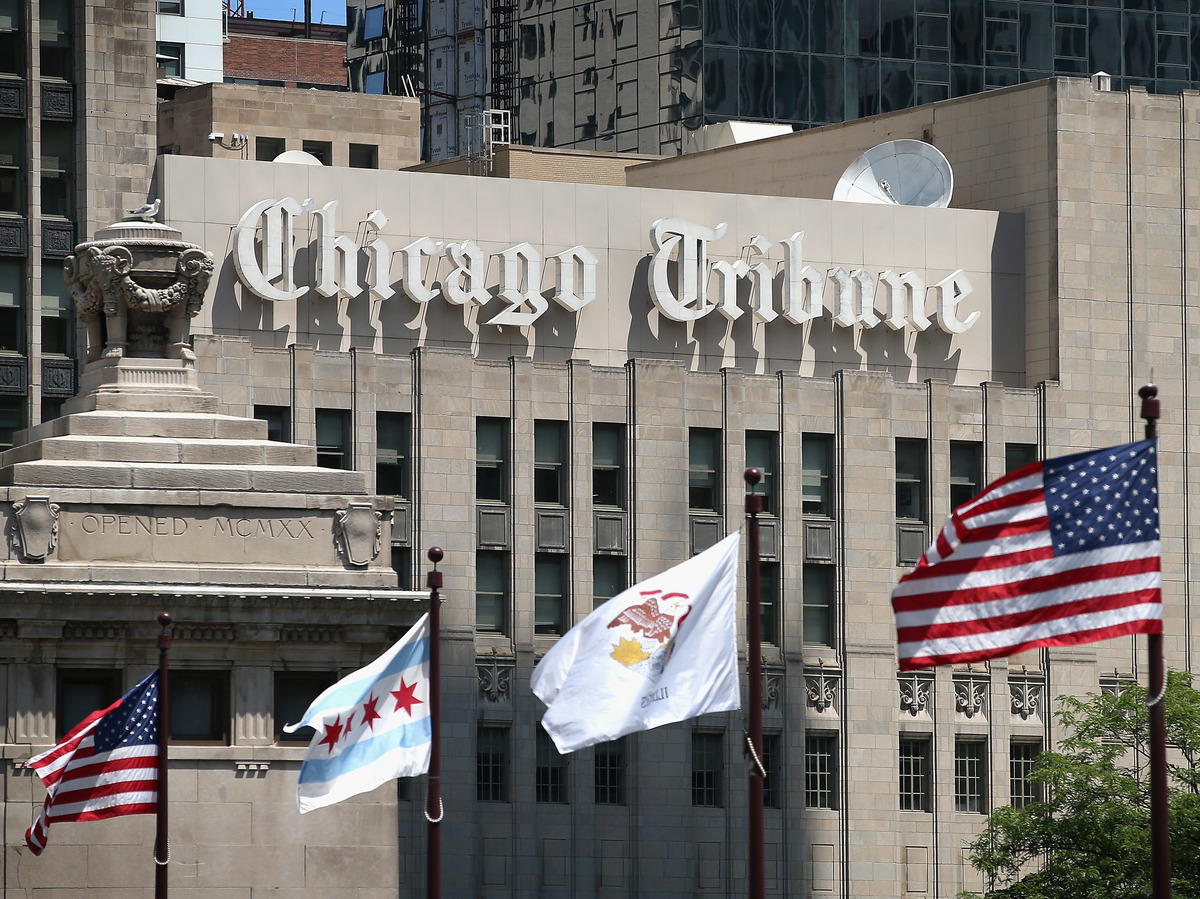 Organizers of a newsroom union at the Chicago Tribune have given the Tribune's parent company, Tronc, a day to voluntarily recognize the guild and start to negotiate a contract.

Organizers of a newsroom union at the Chicago Tribune have informed its publisher that colleagues have given such overwhelming formal support for their effort that the paper's parent company should recognize the guild voluntarily and start to negotiate a contract.

The organizers gave the Tribune's parent company, Tronc, a day to make a decision.

According to a letter from the Chicago Tribune Guild organizing committee obtained by NPR, the nascent union has received signed union authorization cards from more than 85 percent of staffers who would fall under the bargaining unit.

"Voluntary recognition would allow us to begin contract negotiations, saving the company the cost and inconvenience of a campaign and an election that will result overwhelmingly in our favor," read the letter, sent Tuesday morning to Bruce Dold, the Tribune's editor and publisher. This story will be updated with any reaction from the Tribune and Tronc.

It is quite a turnaround in fortunes for unions at Tronc, which comes from a strong anti-union background. Historically, the Tribune and its corporate owners took a strong stance against unions at the paper and in society more broadly.

More recently, Tronc fought fiercely for months against unionizing efforts at the Tribune's larger sister paper, the Los Angeles Times, yet lost badly in a lopsided vote held in January. Tronc, then controlled by Chicago investor Michael Ferro, announced it would sell the Times and The San Diego Union-Tribune less than three weeks later. That sale, to Southern California billionaire Patrick Soon-Shiong, is expected to go through in coming weeks.

Ferro is now gone from the company. He sold his controlling minority stake to McCormick Media — controlled primarily by Sargent M. McCormick-Collier, a relative of the legendary late Col. Robert McCormick who ran the Tribune and built it into a multiplatform staff.

"If the company does not recognize the Chicago Tribune Guild, we will file the signature cards tomorrow with the National Labor Relations Board, and an election will be scheduled," the organizing committee wrote in a separate note to staffers.

A Chicago Tribune spokeswoman said the paper was reviewing the guild's request. "We believe we can best build on the Chicago Tribune heritage and trust with readers by working together as an organization," she said in a emailed statement. "We will continue to work toward our common goal of ensuring that the Chicago Tribune is a leading source for news and information, whatever the outcome."

The Tribune's parent company, Tronc, and its corporate predecessor, Tribune, have suffered severe financial setbacks, some of them self-inflicted. That has, in turn, led to waves of layoffs, buyouts and cutbacks. The Chicago Tribune newsroom is perhaps a third as large as it was at its height.

In the years since it was rechristened Tronc, the company has been beset by controversy and internal crises, starting with a frenetic branding effort around digital innovation. In Los Angeles, the Times' new publisher, Ross Levinsohn, was sidelined by questions raised over past workplace misconduct (He took a leave and became Tronc's chief executive over its digital activities). The LA Times' new editor-in-chief, Lewis D'Vorkin, sparked a newsroom mutiny over his conversations with Disney over coverage and with his accusations that his journalists have been disloyal. He was shifted over to the digital unit in February and left the company earlier this month.

The company created an uproar with plans to create a large separate digital newsroom that would have generated a vast new output of online content outside the company's newspapers, including the Chicago Tribune, the LA Times, The Baltimore Sun, South Florida Sun-Sentinel and Hartford Courant.

A senior Chicago Tribune editor, metro editor Mark Jacob, announced on April 5 that he was leaving the company and tweeted: "owners and managers of media companies must embrace a mission of journalism as public service, invest in their people and show bravery and independence. Our democracy depends on it."

Some digital newsrooms and smaller newspapers have been seeking union representation as well. Union efforts recently have popped up at some surprising newsrooms — including the digital outlet Mic, the satiric publication The Onion, the Casper Star-Tribune in Wyoming and the Missoula Independent in Montana.

If the union is recognized by Tronc voluntarily or wins it in a vote overseen by federal labor regulators, the guild would represent about 280 nonmanagement employees at the Tribune; its sister Spanish-language daily, Hoy; the entertainment-oriented tabloid RedEye; and four suburban publications.