Accessibility links
Waffle House Hero, Honored By Lawmakers, Raises Thousands For Victims' Families : The Two-Way James Shaw Jr., credited with saving lives after grabbing the shooter's rifle, was lauded by Tennessee lawmakers who said that "if his heroism is equaled by anything," it's his penchant for honesty. 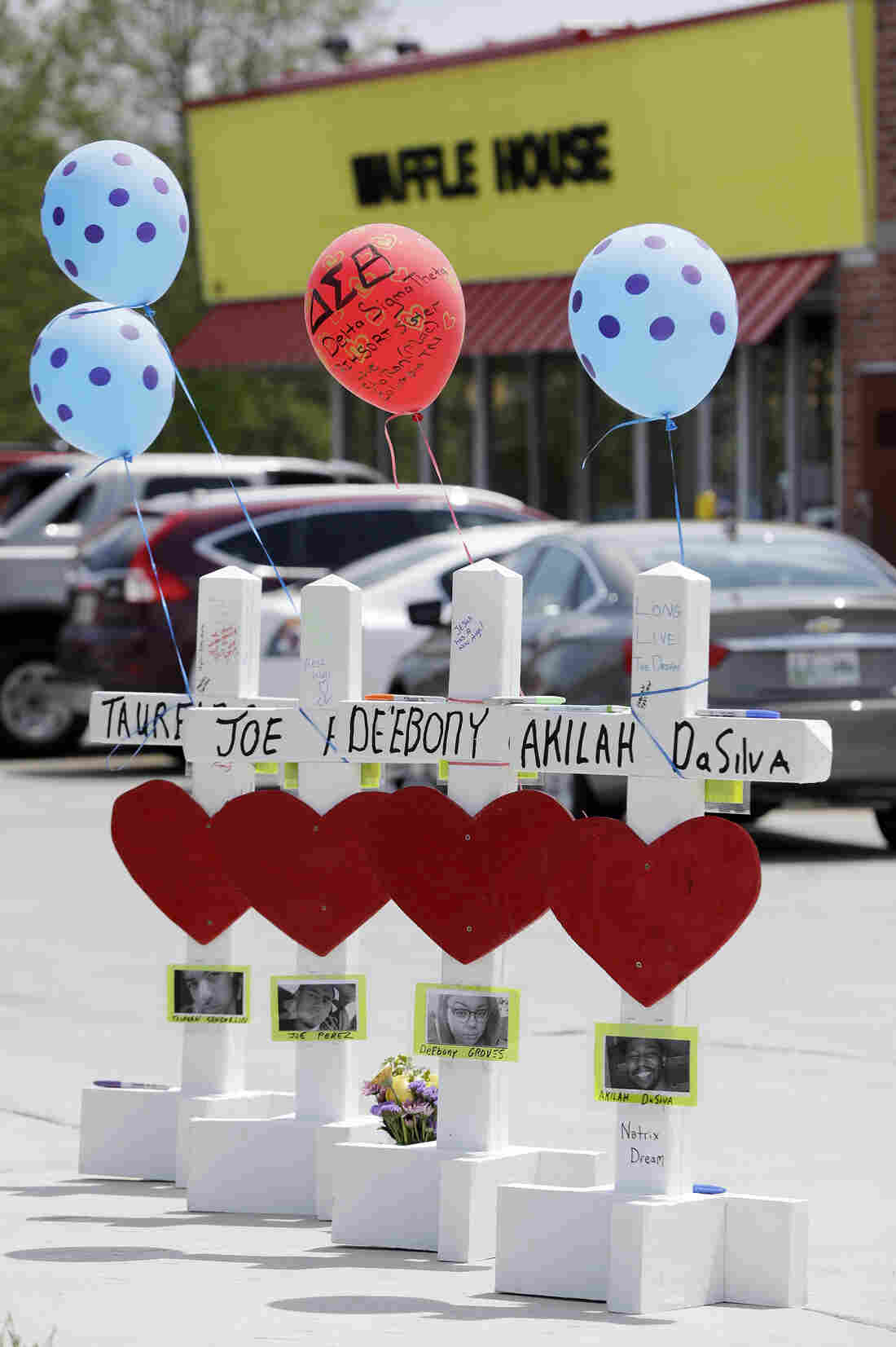 Four wooden crosses stand as a memorial Wednesday to those killed during a shooting at a Waffle House in Nashville, Tenn. The restaurant reopened three days after the attack. Mark Humphrey/AP hide caption 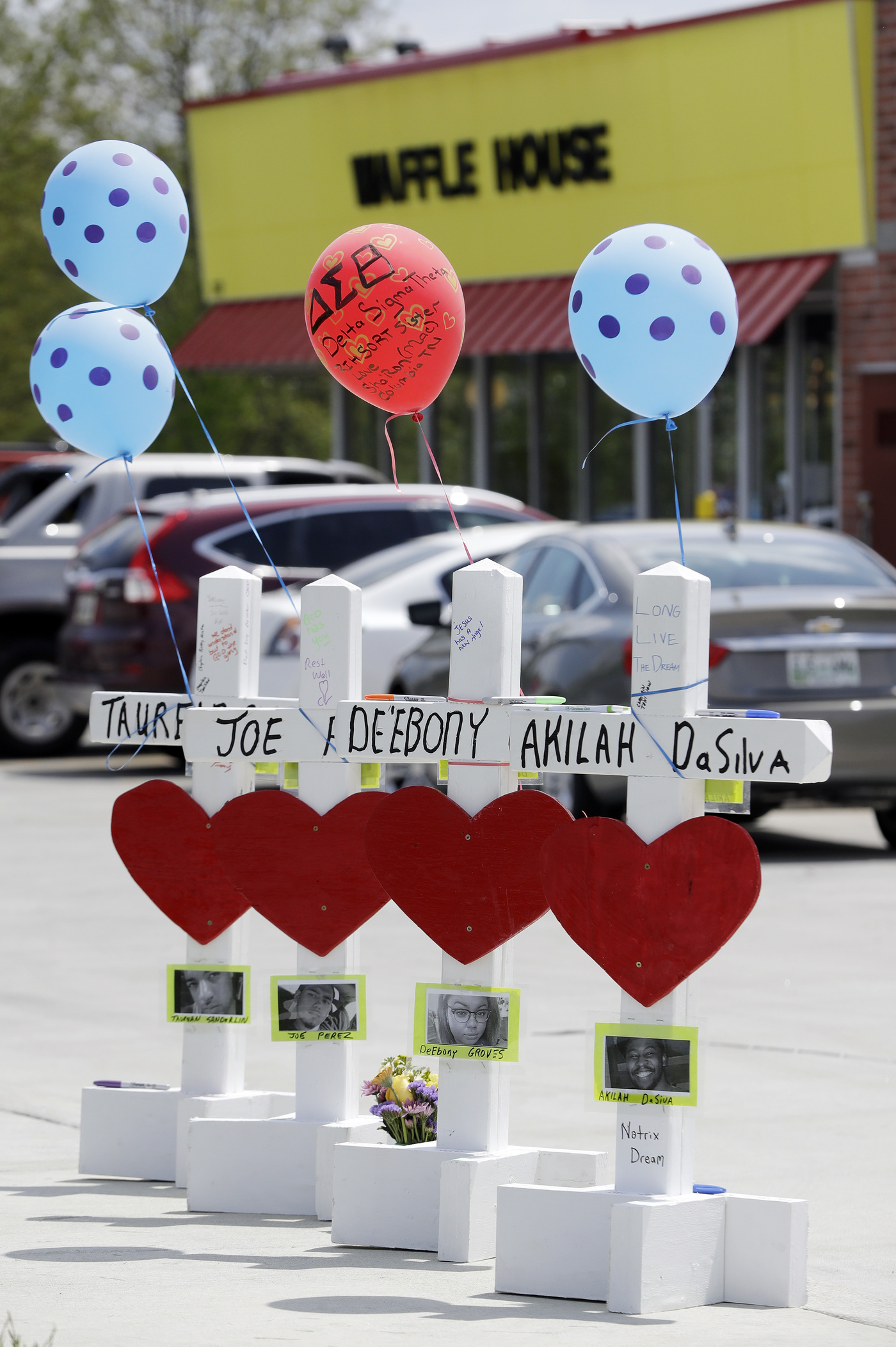 Four wooden crosses stand as a memorial Wednesday to those killed during a shooting at a Waffle House in Nashville, Tenn. The restaurant reopened three days after the attack.

As it reopened its doors for business Wednesday, four wooden crosses painted white and decorated with hearts and balloons stood in front of a Nashville-area Waffle House, a stark reminder that just three days earlier it was the scene of seemingly random and lethal bloodshed.

Each victim killed in Sunday's shooting rampage had their photographs and names on one of the crosses: Taurean C. Sanderlin, 29; Joe R. Perez, 20; DeEbony Groves, 21; and Akilah DaSilva, 23.

In addition to the four people killed, two others were shot and seriously wounded, according to Nashville police.

Joyce Perkins, a therapist who lives just a mile and a half down the road, was one of the first lunch customers Wednesday and told Nashville Public Radio that she understands how difficult it can be process the loss of loved ones.

"I just wanted to be present and do something and just watch the community come together," she said.

Waffle House Inc. says proceeds from the restaurant, in the neighborhood of Antioch, will be given to victims' families. "For 30 days we will be donating 100% of the sales from this restaurant to the victims' and their families," a Waffle House spokesperson tells NPR.

Tennessee lawmakers said the toll from the attack "would surely have been much greater" were it not for James Shaw Jr.

The 29-year-old had just sat down with a friend to eat and wound up springing into action, wresting away the gunman's rifle, throwing it over a counter and pushing him out the door.

The state General Assembly wanted to set the record straight about Shaw, who has denied he is a hero, issuing a resolution to the contrary Tuesday. It reads in part:

"if his heroism is equaled by anything, it is Mr. Shaw's penchant for honesty; he later asserted that his actions were purely selfish and that he was only trying to stay alive, but everyone else, from Mayor David Briley, to Police Chief Steve Anderson, to Nashvillians from all walks of life, disagrees; and WHEREAS, no matter his motivations, Mr. Shaw is indeed a hero; his actions on that fateful morning are unfathomable to most, indescribable by even the chief of police, and very poignant to the citizens of Nashville, who are deeply grateful for his brave actions in the face of extreme adversity that saved many lives"

The Waffle House spokesperson agreed, saying, "As for Mr. Shaw — although he says he is not a hero, he definitely is. His efforts saved many lives that morning. He is truly a hero. And of course we will be honoring him. We have not worked the details out."

Shaw's elbow was grazed by a bullet and his hand was burned when he grabbed the rifle. But in the hours after the attack, his mind was on the other victims and their families.

On Sunday, Shaw set up a GoFundMe page for victims' families that by Thursday afternoon had raised more than $165,000, far surpassing its goal of $15,000.

"Please take the time to donate as all of the proceeds will be given to the families," Shaw wrote. "Thank you again for your generosity and blessings!"

A day later, Yashar Ali, a journalist based in New York City, set up a GoFundMe for Shaw, saying, "James' grace has inspired me to start this page to give him the support I feel he deserves."

Alright, I decided to start a @gofundme for James Shaw Jr, the Waffle House hero. I normally hate when people say this, but in this case, I think its important...please RT.

The suspected gunman, 29-year-old Travis Reinking, was apprehended a day after the shooting in a wooded area not far from the restaurant. He is facing four counts of murder as well as four counts of attempted murder, including one for Shaw.

Reinking's initial court appearance is set for May 7.

The reopening of the Antioch Waffle House just three days after the shooting was in keeping with the restaurant's reputation for keeping calm and carrying on.

The "Waffle House Index," reportedly created by former Federal Emergency Management Agency Administrator W. Craig Fugate, measures the severity of a disaster against the status of the restaurant — which prides itself on staying open 24 hours a day, 365 days a year.

As Fugate told NPR's Wait Wait...Don't Tell Me! in 2016: "They are open most of the time. And that was the index. If a Waffle House is closed because there's a disaster, it's bad. We call it red. If they're open but have a limited menu, that's yellow. ... If they're green, we're good, keep going."