Accessibility links
Arkansas Installs A New Ten Commandments Monument At Its Capitol : The Two-Way The first version of a Ten Commandments monument at the Arkansas Capitol lasted less than 24 hours before it was destroyed by a car last June.

Arkansas Installs A New Ten Commandments Monument At Its Capitol

Arkansas Installs A New Ten Commandments Monument At Its Capitol 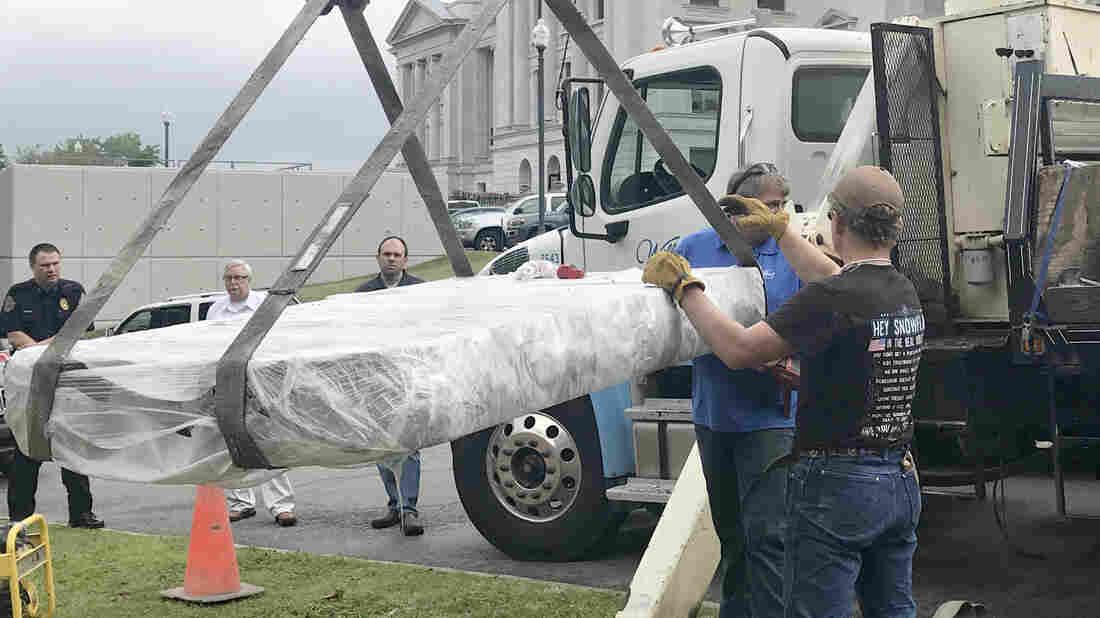 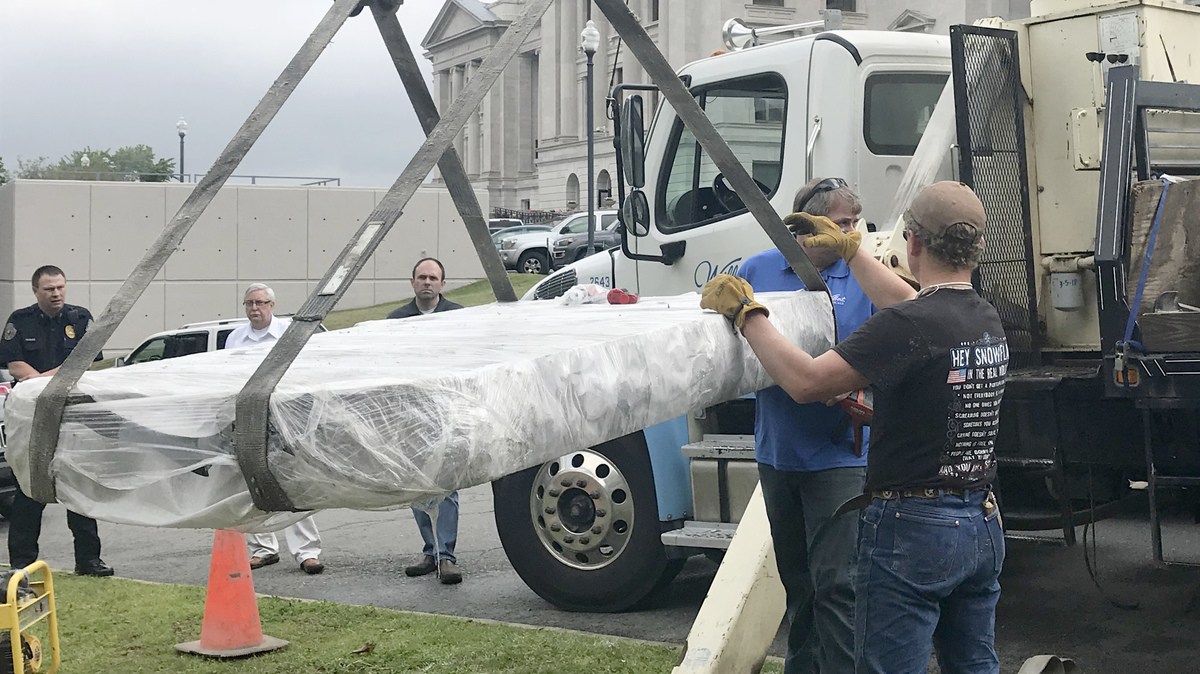 Workers used a crane to install a Ten Commandments monument Thursday outside the Arkansas state Capitol in Little Rock.

The first version of a Ten Commandments monument at the Arkansas Capitol lasted less than 24 hours before it was destroyed by a car last summer. Now the state has installed a new monument — and it's already facing potential legal challenges.

The new Ten Commandments monument is protected on all four of its corners by thick concrete bollards — a step that was taken after a man police identified as Michael T. Reed II drove his Dodge Dart into the first monument hours after it was installed in June 2017.

On Thursday morning, workers used a large crane to lower the new tablet-shape monument into place, in an event that was livestreamed online by state Sen. Jason Rapert, a Republican who sponsored the 2015 act that approved the monument's placement on the Capitol building grounds.

It was the second time Reed had destroyed a Ten Commandments monument, authorities said, citing a similar instance in which he drove a car into the Ten Commandments monument at Oklahoma's state Capitol in 2014. In the Arkansas incident, a video that appeared to have been taken from inside the car was posted online, featuring a man yelling, "Oh my goodness. Freedom!" as the car careered into the monument.

As for Reed's whereabouts now — he is currently being held at the Arkansas State Mental Hospital, after a county court found him mentally unfit to stand trial, as NPR member station KUAR reported last fall.

Several groups have opposed the monument. The state chapter of the American Civil Liberties Union has said it is unconstitutional. And then there's The Satanic Temple, which says it plans to sue the state of Arkansas. It says the state rejected its offer of a monument that would honor "pluralism and religious freedom" and represent another viewpoint. By rejecting that monument, the group says, Arkansas is establishing a religious preference.

The Satanic Temple describes itself as "a non-theistic religious organization" that "understands the Satanic figure as a symbol of man's inherent nature, representative of the eternal rebel, enlightened inquiry and personal freedom rather than a supernatural deity or being," according to a statement.

The group's spokesman and co-founder, Lucien Greaves, made a surprise appearance at the end of Rapert's streaming video from the Capitol grounds on Thursday, walking up to the live-feed camera and citing Arkansas' state Constitution as he spoke against the monument. The operator of the camera then told Greaves — in error or to mislead him — that the feed had no audio; soon after, he ended the video stream. 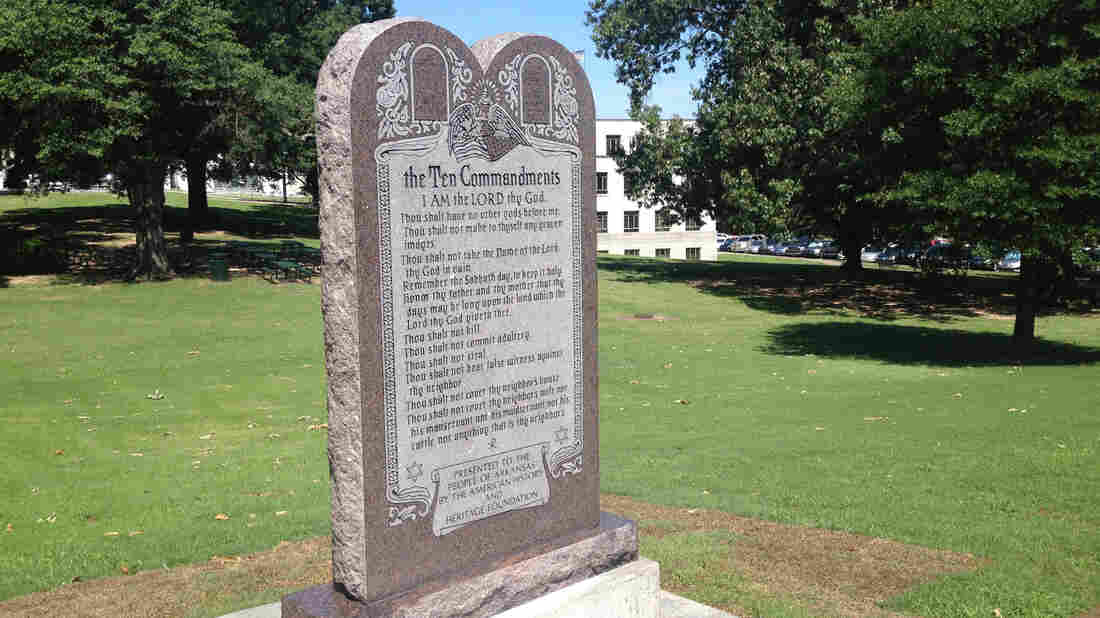 The new monument is a replacement for this one, which was destroyed hours after it was installed on the grounds in June 2017. Reuters hide caption 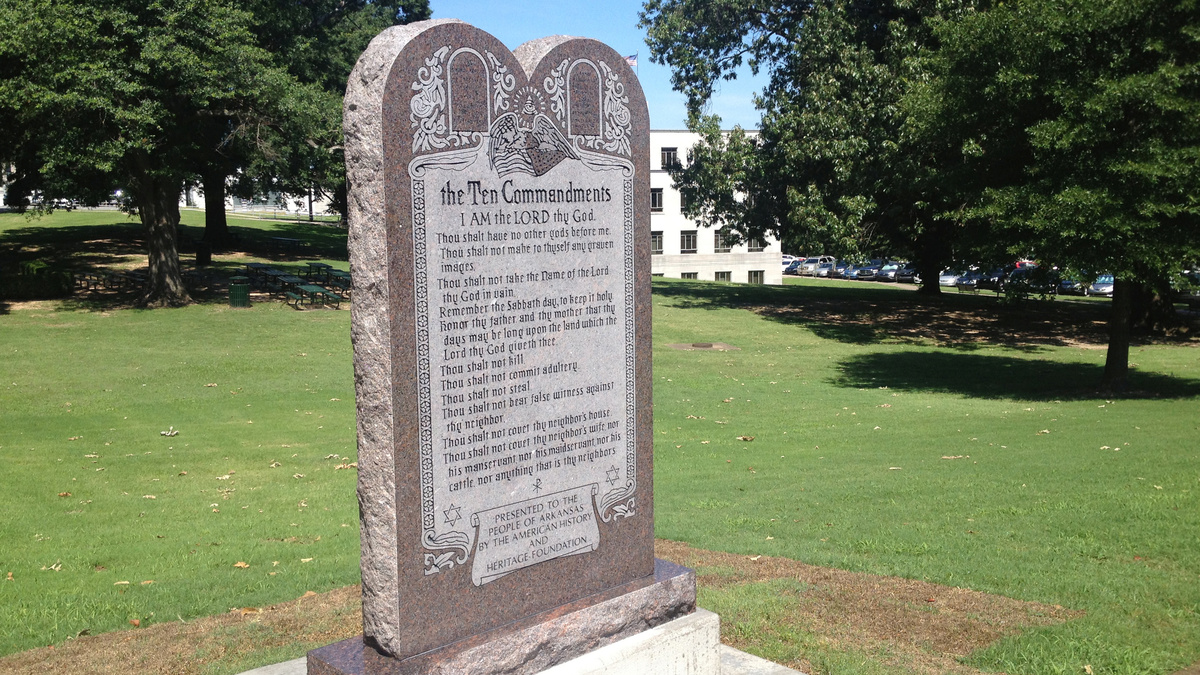 The new monument is a replacement for this one, which was destroyed hours after it was installed on the grounds in June 2017.

Backers of the monument say it's meant to copy a Ten Commandments monument in Texas that stands on the grounds of the state Capitol — and that does not run afoul of the U.S. Constitution, the Supreme Court ruled in 2005.

The high court justices said the Texas monument depicted the commandments in a historical, not purely religious, context. In Arkansas, Rapert said he agrees.

"The Ten Commandments are displayed in the United States Supreme Court," Rapert said in a recent Facebook posting about the Arkansas monument. "We believe it's totally acceptable, and it's right and true to remind people about the historical and moral foundation of law."

He added, "With all of the school shootings that are going on across the country, I think people are improved when they can see daily, 'Thou shalt not kill.' "

Rapert said he plans to work on getting that message into schools.

To pay for the new monument, Rapert created a nonprofit, the American History & Heritage Foundation. The group's GoFundMe page shows that it raised more than $85,000. Many of the largest donations — as much as $3,000 — came from churches. An additional $25,000 came from Pure Flix, an Arizona-based Christian film and television studio.