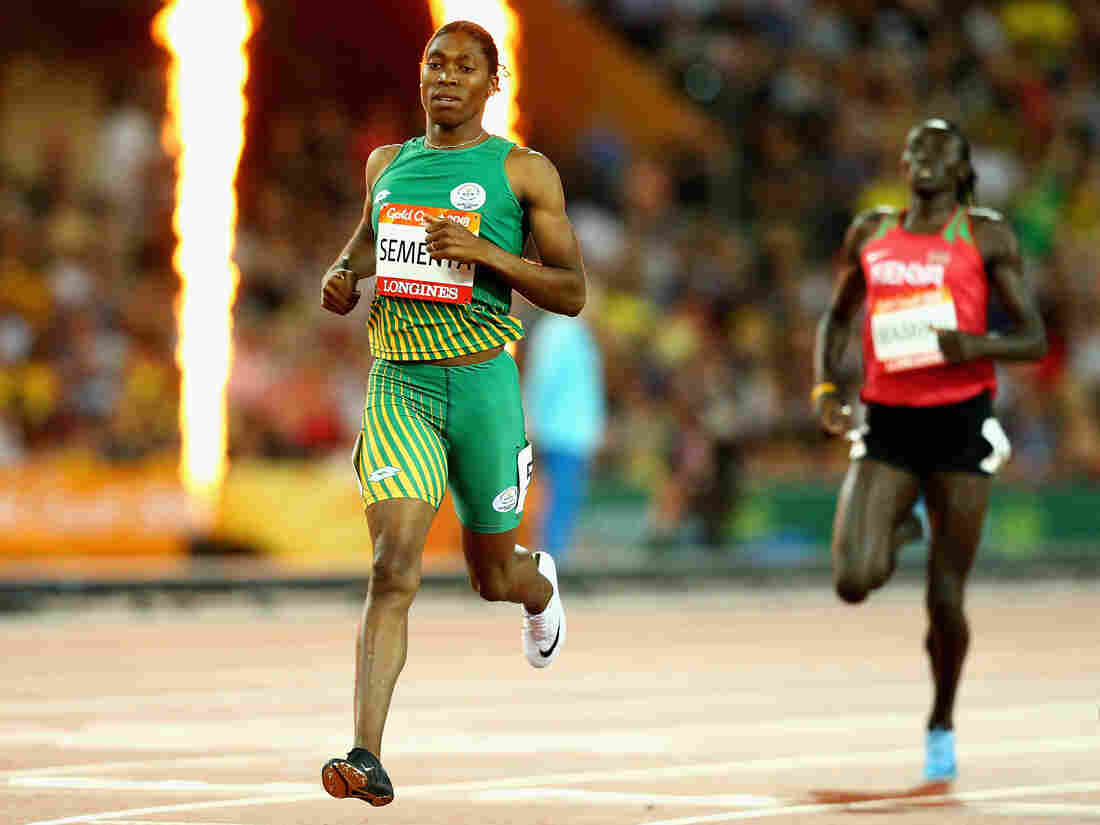 Caster Semenya of South Africa crosses the line to win gold in the Women's 800 meters during athletics on Day 9 of the Gold Coast 2018 Commonwealth Games in Australia. Michael Dodge/Getty Images hide caption 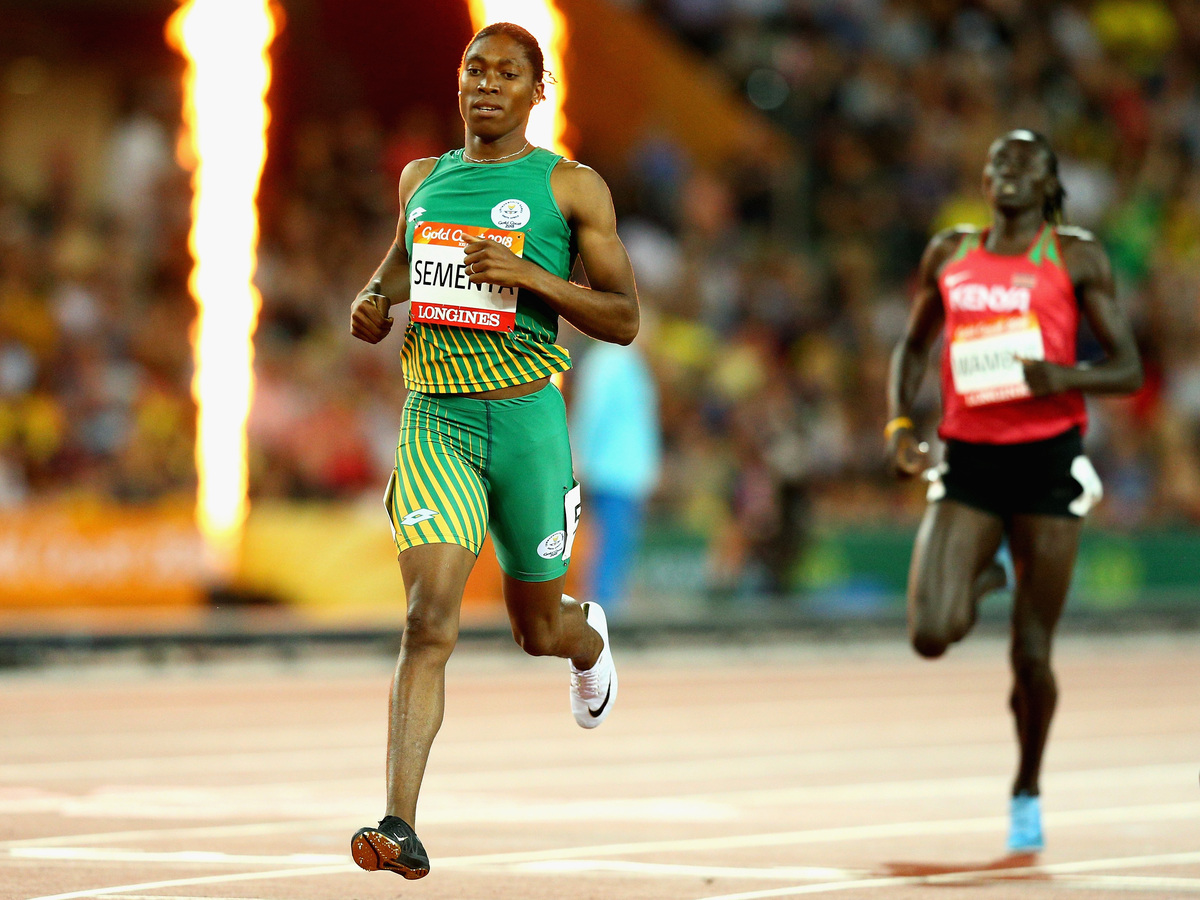 Caster Semenya of South Africa crosses the line to win gold in the Women's 800 meters during athletics on Day 9 of the Gold Coast 2018 Commonwealth Games in Australia.

What exactly makes a woman?

Track and field's world governing body thinks the answer has to do with levels of serum testosterone, at least when it comes to female runners competing in middle-distance races.

The International Association of Athletics Federation announced a new set of rules Thursday that will ban women who naturally produce higher-than-normal levels of testosterone from participating in races ranging from 400 meters to the mile, unless they agree to take medication.

Athletes with the condition, called hyperandrogenism, would be eligible to compete at the international level only if they reduced blood testosterone levels through the use of hormonal contraceptives, including birth control pills.

The rule will go into effect on Nov. 1.

"Our evidence and data show that testosterone, either naturally produced or artificially inserted into the body, provides significant performance advantages in female athletes," said IAAF President Sebastian Coe in a statement.

"The revised rules are not about cheating, no athlete with a [difference of sexual development] has cheated, they are about levelling the playing field to ensure fair and meaningful competition in the sport of athletics where success is determined by talent, dedication and hard work rather than other contributing factors," he added.

That is still far above levels in most women, including elite female athletes, whose levels range from 0.12 to 1.79 nanomoles per liter, states a 22-page IAAF document defending the organization's decision. Meanwhile, the normal male range after puberty is much higher, from 7.7 to 29.4 nanomoles.

"Therefore, a concentration of 5 nmol/L is an appropriate decision limit for purposes of these Regulations," the IAAF stated.

As NPR reported, the IAAF's first effort to restrict some female athletes was struck down by the Court of Arbitration for Sport after a challenge by Indian sprinter Dutee Chand, who was prohibited from racing after a hormone test. In its decision, the CAS wrote it "was unable to conclude that hyperandrogenic female athletes may benefit from such a significant performance advantage that it is necessary to exclude them from competing in the female category."

Caster Semenya: 'It's All About Loving One Another'

Caster Semenya: 'It's All About Loving One Another'

The latest guidelines are the result of two years of scientific research by the organization, including a 2017 study commissioned by the IAAF containing what it said is evidence connecting high testosterone level and improved performance.

Other conditions established by the organization: Female athletes must maintain testosterone levels within the new limits for at least six months and must maintain them continuously, whether in competition or out.

Under these rules all hyperandrogen athletes who refuse to take drugs to alter their body's natural testosterone production can move into either shorter or longer-distance running, participate in noninternational races, or race against men.

Athletes participating in the 100m, 200m and 100m hurdles are exempt, as are races longer than 1 mile and field events.

South African Olympian Caster Semenya is expected to be among those affected by the changes.

Shortly after the announcement Semenya took to Twitter with a post that read, "I am 97% sure you don't like me, but I'm 100% sure i don't care," and ended the note with a slightly angry frowny-face emoji.

The two-time gold medalist and three-time world champion has been at the center of the fairness and testosterone debate since she began dominating the 800-meter race on the world scene as a teenager in 2009.

Everything about her speed, the way she looked — broad shoulders, narrow hips, prominent Adam's apple — and the way she spoke, in a deep voice, prompted her competitors to openly question Semenya's sex.

As a result she was subjected to invasive sex verification tests that ultimately (after being leaked) revealed she had testosterone levels three times higher than most women.

During the four-year period when the IAAF had imposed its testosterone level limits, Semanya continued to rank among the world's fastest middle-distance runners, though her speed was not as explosive as it had been before the policy was implemented. And in 2015, she failed to make the world final.

Neither Semenya nor the IAAF has ever confirmed that she was forced to suppress her natural hormone production. But when the policy was lifted Semenya's running time improved to her pre-restriction levels, Deadspin reported.

Athletics South Africa released a statement Thursday stating it would seek advice from the nation's Sport Ministry on how to handle the issue, adding that it will support "all our athletes who may be affected by this new ruling."

Athletics South Africa has responded to the @iaaforg new female testosterone regulation laws that are set to come into effect on 1st November. pic.twitter.com/xEG382T9iU

Meanwhile, the African National Congress reacted in a less restrained manner, saying the IAAF's regulations intentionally target Semenya and are unfair and racist.

"The ANC has always understood sport as a unifier and a tool to bring people and nations together. It is for this reason and many that the ANC cannot ignore the attempt by the IAAF to discriminate and exclude athletes. These new regulations infringe on the Human Rights of athletes, targeting mainly those in East Europe, Asia, and the African continent. The racial undertones of this cannot go unnoticed," it said in a statement.