Accessibility links
Caravan Arrives In Tijuana, As Migrants Prepare To Request Asylum : The Two-Way A group of Central American asylum-seekers, who have been traveling through Mexico for weeks, is gathering near the border with the U.S. The migrants say they will request asylum on Sunday. 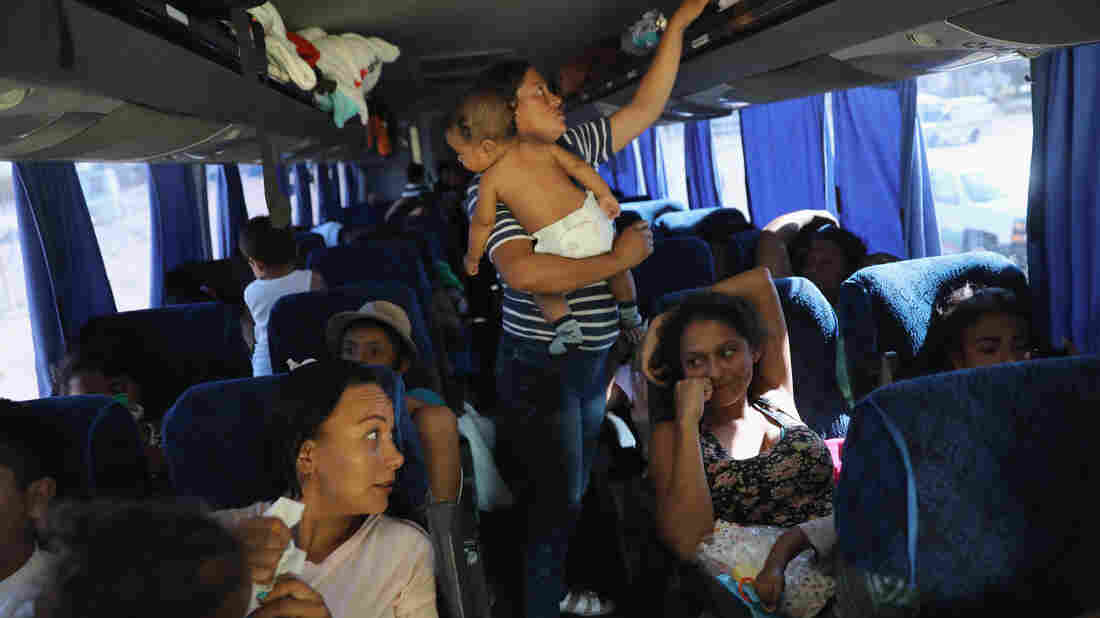 Central American asylum-seekers ride a bus to Tijuana on Wednesday, while passing through San Luis Rio Colorado along the U.S.-Mexico border. Hundreds of immigrants, the remnants of a caravan of Central Americans that began almost a month ago, set out on the last leg of their journey north in Mexico. John Moore/Getty Images hide caption 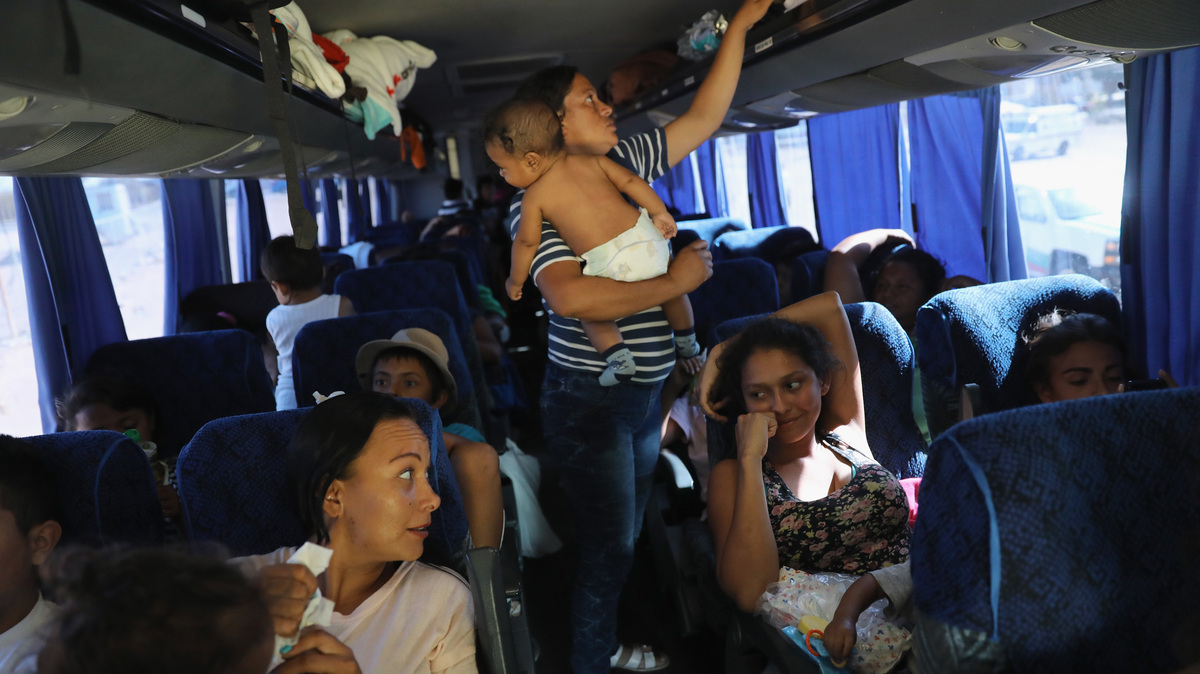 Central American asylum-seekers ride a bus to Tijuana on Wednesday, while passing through San Luis Rio Colorado along the U.S.-Mexico border. Hundreds of immigrants, the remnants of a caravan of Central Americans that began almost a month ago, set out on the last leg of their journey north in Mexico.

Central American migrants are gathering near the U.S. border and say they plan to request asylum from the U.S. government on Sunday.

The asylum-seekers have been traveling north through Mexico for weeks. The caravan is an annual event, but this year's gathering has received unusual attention because of sharp criticism from President Trump.

The caravan was stalled in southern Mexico earlier this month, and many participants chose to seek asylum in Mexico instead of continuing. But remnants of the caravan traveled on toward the U.S. border, The Associated Press reports, and busloads began arriving in Tijuana late Tuesday.

Mexican Ambassador To U.S. Predicts Caravan Will 'Conclude' Within Days

Jean Guerrero of NPR member station KPBS, reporting from Tijuana, says more than 200 people have arrived in the border town.

In the U.S., some supporters of the caravan have been marching south toward San Diego to meet up with the migrants and welcome them at the border. At least one group opposed to the caravan has said it has undefined plans to protest this weekend in the San Diego area.

The Department of Homeland Security says it is monitoring the caravan, promising to enforce U.S. immigration laws and accusing the migrants of having "the apparent intention of entering the United States illegally."

That is not what the caravan participants say they plan to do. They say that on Sunday, they will seek asylum, following the legal process for asking for safe harbor from persecution in their home countries.

KPBS's Guerrero spoke to Jeimy Pastora Castro in Tijuana, outside the port of entry. Castro, who is from Honduras, was holding her 2-year-old daughter.

"I didn't come here to cross illegally," Castro said. "I came here for help, for the president to have a heart — since he's a human like us ... and was also created by God."

"Both U.S. law and a U.N. treaty on the rights of refugees require that asylum-seekers get a fair hearing," Guerrero notes. "Most of the people in this caravan come from Honduras, where a divisive presidential election has led to killings in the streets."

Why A Single Question Decides The Fates Of Central American Migrants

DHS says that in anticipation of asylum claims, extra immigration judges and attorneys are being sent to the Southern U.S. border.

"For those seeking asylum, all individuals may be detained while their claims are adjudicated efficiently and expeditiously, and those found not to have a claim will be promptly removed from the United States," Secretary of Homeland Security Kirstjen Nielsen says.

The U.S. offers asylum to those with a "well-founded fear of persecution" in their home country, on the basis of their race, religion, nationality, political opinion or membership in a certain social group.

Central Americans fleeing violence have found it difficult to receive asylum based on gang violence waiting for them at home, as NPR's Eyder Peralta reported in 2016. The U.S. has tended to identify those people as fleeing crime, which is not grounds for asylum, rather than individual persecution.

And the Trump administration has been working to limit asylum further, as NPR's Joel Rose reported last month.

Attorney General Jeff Sessions, who has criticized "vague, insubstantial and subjective" asylum claims, is using his power to overturn judicial decisions in immigration court to reshape how those courts work.

In Their Search For Asylum, Central Americans Find The U.S. Is Closing Its Doors

But to qualify for asylum, or be rejected, a migrant must first be processed at the border.

As NPR's John Burnett reported last year, would-be asylum-seekers at the Southern border have described being turned away or threatened with deportation or told by officials that there is no such thing as asylum.

Turning away someone seeking asylum without considering his claim violates national and international law.

U.S. Customs and Border Protection denies that asylum-seekers are being turned away.