Accessibility links
Otto Warmbier's Parents Sue North Korea, Alleging Torture Of Their Son : The Two-Way Warmbier, an American college student, died last summer after spending more than a year in North Korean custody. He was returned home in a coma. A lawsuit accuses Pyongyang of killing him. 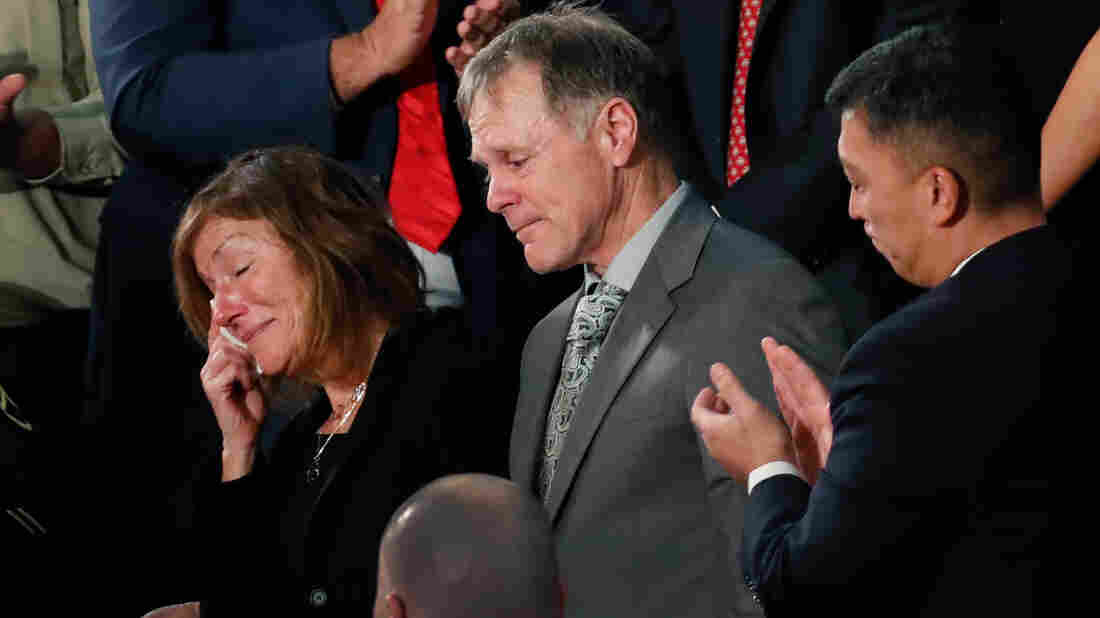 The teary-eyed parents of Otto Warmbier, the American student who died days after being freed from imprisonment in North Korea, react to a standing ovation during President Trump's State of the Union address to a joint session of Congress on Jan 30. The parents filed a wrongful death lawsuit against North Korea on Thursday, saying its government tortured and killed their son. Pablo Martinez Monsivais/AP hide caption 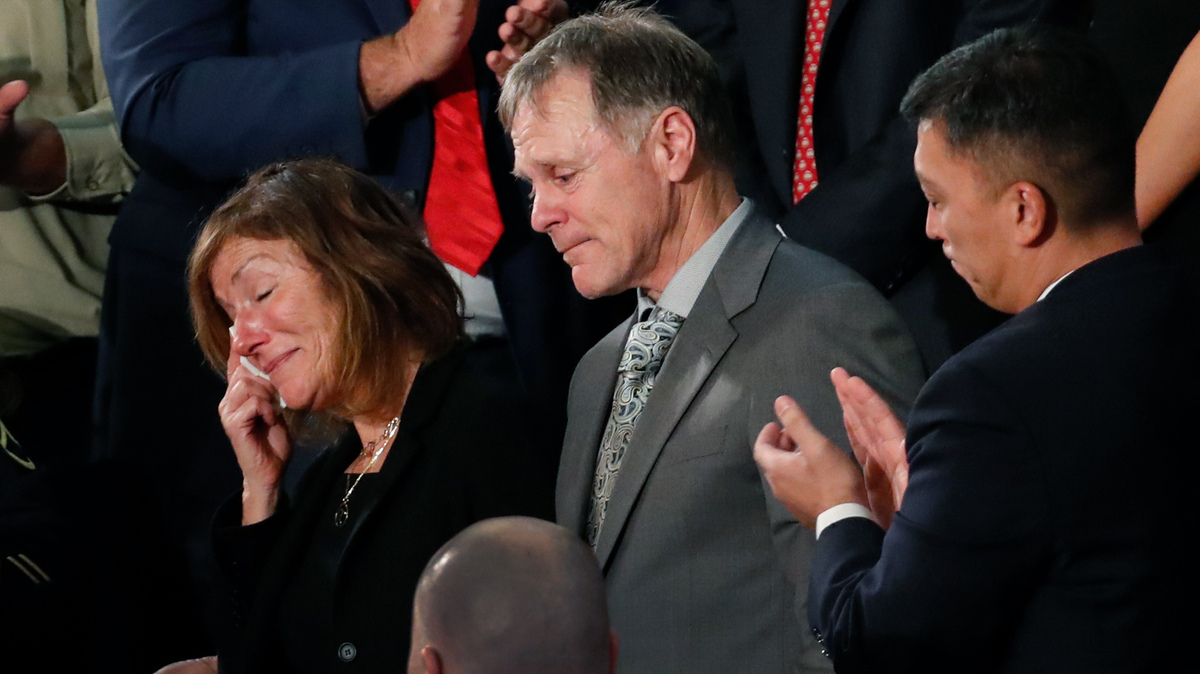 The teary-eyed parents of Otto Warmbier, the American student who died days after being freed from imprisonment in North Korea, react to a standing ovation during President Trump's State of the Union address to a joint session of Congress on Jan 30. The parents filed a wrongful death lawsuit against North Korea on Thursday, saying its government tortured and killed their son.

The parents of an American college student who died after more than a year in North Korean custody have sued North Korea, accusing the regime of torture and mistreatment.

Otto Warmbier was returned to the U.S. last June in a coma. He died soon afterward. A coroner concluded that his death was "due to an unknown insult more than a year prior to death."

North Korea has denied torturing Warmbier, whom they accused of trying to steal a poster and sentenced to 15 years' hard labor. Pyongyang says the student's coma was caused by botulism.

Cynthia and Fred Warmbier, his parents, say that's a lie.

In the lawsuit, filed Thursday in the U.S. District Court for Washington, D.C., they say North Korea "brutally tortured and murdered" their 22-year-old son.

The Warmbiers are asking for punitive damages.

The lawsuit comes just weeks before President Trump is due to meet with North Korean leader Kim Jong Un, an extraordinary and unprecedented meeting. And it was filed just days after the administration announced that Mike Pompeo — then CIA director, now secretary of state — met with North Korea earlier this month.

In general, countries are immune from lawsuits in other countries. "We prefer that disputes between sovereigns really be resolved at the diplomatic stage, as opposed to the private civil litigation stage," law professor Stephen Vladeck of the University of Texas explained to NPR in 2016. And then there's the question of reciprocity, he said: "Otherwise you'd have a race to the bottom where countries would hale each other into each other's courts."

But there are exceptions — including, in the U.S., an exception for countries designated as state sponsors of terrorism. That's what allowed Washington Post reporter Jason Rezaian to sue Iran for torture in 2016.

North Korea was on that list until 2008, when it was removed by the George W. Bush administration. But Trump put Pyongyang back on it in November, making the Warmbiers' lawsuit possible.

Theirs is not the first lawsuit against North Korea. Several U.S. citizens sued in the 2000s — and won default judgments, after Pyongyang declined to show up to defend the cases.

The brother and son of Kim Dong Shik, a U.S. permanent resident who was abducted in China and disappeared, sued, alleging that North Korea was responsible. The U.S. District Court in D.C. ordered North Korea to pay $330 million.

Relatives of two Americans who were killed in a 1972 terrorist attack in Tel Aviv sued North Korea for providing material support to the terrorist group behind the attack. The U.S. District Court for Puerto Rico awarded a judgment of $378 million.

Thirty American citizens injured in or affected by a Hezbollah strike in northern Israel sued North Korea and other entities over the attack, receiving a total judgment for some $169 million.

Crew members of the USS Pueblo and their families sued North Korea over the 1968 torture of the crew, receiving a $65 million judgment.

The crew members of the Pueblo never managed to collect their money from Pyongyang, but they ultimately received $9 million from the U.S. Victims of State-Sponsored Terrorism fund. The relatives of the victims in Tel Aviv have attempted to collect that money by seizing North Korean assets related to the registration of Internet domains; so far, that has been unsuccessful.

As for the family of Kim Dong Shik, the last entry in that case's court docket is an attempt to mail a notice of default judgment to North Korea.

The envelope was returned as undeliverable.