Accessibility links
Boy Scouts Changing Name To 'Scouts BSA,' As Girls Welcomed Into Program : The Two-Way The organization will still be Boy Scouts of America, but beginning in 2019, the program for older youth will change its name. Girls have already been allowed to sign up as Cub Scouts. 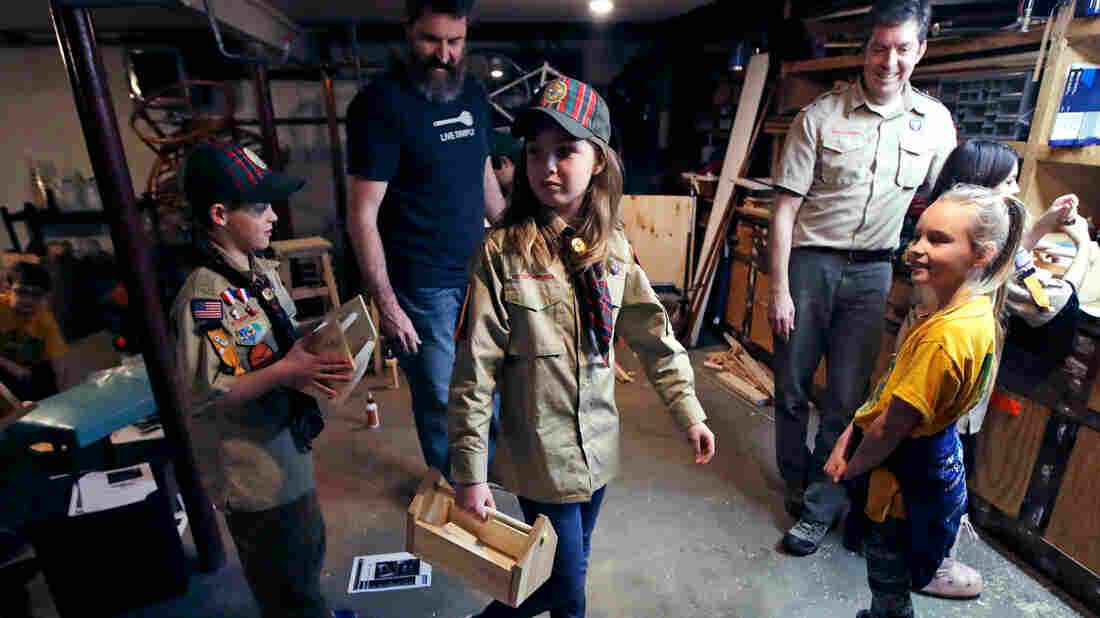 Tatum Weir (center) carries a tool box she built as her twin brother, Ian (left), follows after a Cub Scout meeting in Madbury, N.H., on March 1. For more than a century, the Boy Scouts of America's flagship program for older boys has been known as the Boy Scouts. With girls soon entering the ranks, the name will change to "Scouts BSA." Charles Krupa/AP hide caption 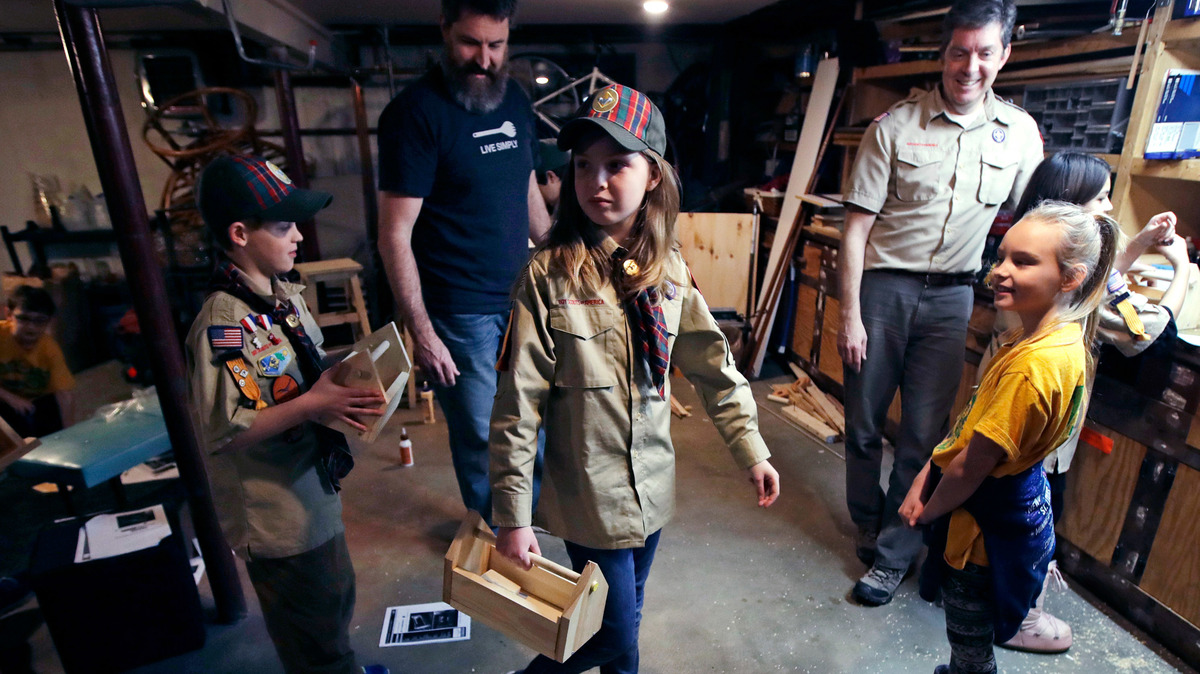 Tatum Weir (center) carries a tool box she built as her twin brother, Ian (left), follows after a Cub Scout meeting in Madbury, N.H., on March 1. For more than a century, the Boy Scouts of America's flagship program for older boys has been known as the Boy Scouts. With girls soon entering the ranks, the name will change to "Scouts BSA."

The Boy Scouts program is becoming Scouts BSA in February 2019 to reflect the decision to include young women, the Boy Scouts of America announced on Wednesday.

The organization's name will remain the same; only the program for older youth will change its name.

The Boy Scouts of America, or BSA, announced last fall that it would begin allowing girls to become Scouts — much to the frustration of the Girl Scouts, which has advocated for single-gender scouting.

The Cub Scouts program for younger children was the first to open up to girls. Thousands of girls have already joined under an early adopter program.

Other Boy Scouts programs for older youth — such as an outdoor adventure program called Venturing — were already open to girls. But those programs didn't offer girls the chance to attain the highest rank of Eagle Scout.

This Boy Scout Welcomes Girls To His Troop

By next year, older girls will be able to join Scouts BSA and try to become Eagle Scouts, just like the boys. (Some female Cub Scouts are already thinking ahead. Tatum and Ian Weir, 10-year-old twins, hope to become the first brother and sister pair of Eagle Scouts, The Associated Press reports.)

The rebranding of the Boy Scouts program is paired with a new ad campaign — "Scout Me In" — designed to appeal to both boys and girls.

"As we enter a new era for our organization, it is important that all youth can see themselves in Scouting in every way possible," Boy Scouts of America chief executive Michael Surbaugh said in a statement. "That is why it is important that the name for our Scouting program for older youth remain consistent with the single name approach used for the Cub Scouts."

A year ago, before the Boy Scouts announced they would admit girls, NPR spoke with Sydney Ireland, a young woman in Manhattan who attends scouting events with her brother and spent years lobbying the Boy Scouts to admit girls like her:

"Over the years, Sydney's activities with the troop have included camping trips, hiking, archery, ice climbing and, yes, knot-tying. As a city kid, she has learned to cherish a connection to the outdoors and she credits the Boy Scouts for helping to foster it.

"But although the local troop has welcomed Sydney's participation, she is not able to officially earn merit badges and advance in rank along with the boys around her ... For the last few years, she has been asking the Boy Scouts of America to let girls officially join through letters to national leadership, public op-eds and a Change.org petition.

" 'I just want to see a change,' she said. 'Right now they're discriminating against girls, and I'm just calling it as it is.' "

Now, the Boy Scouts have changed course, but it doesn't look as though Sydney Ireland will be able to fulfill her dream of becoming an Eagle Scout. By the time the Boy Scouts policy change to admit girls comes into effect next year, she will have aged out of the program.