Accessibility links
Connecticut OKs Bill Pledging Electoral Votes To National Popular-Vote Winner : The Two-Way Connecticut is set to join 10 states that commit their electoral votes to the presidential candidate who wins the nation's popular vote — regardless of who wins in those states. 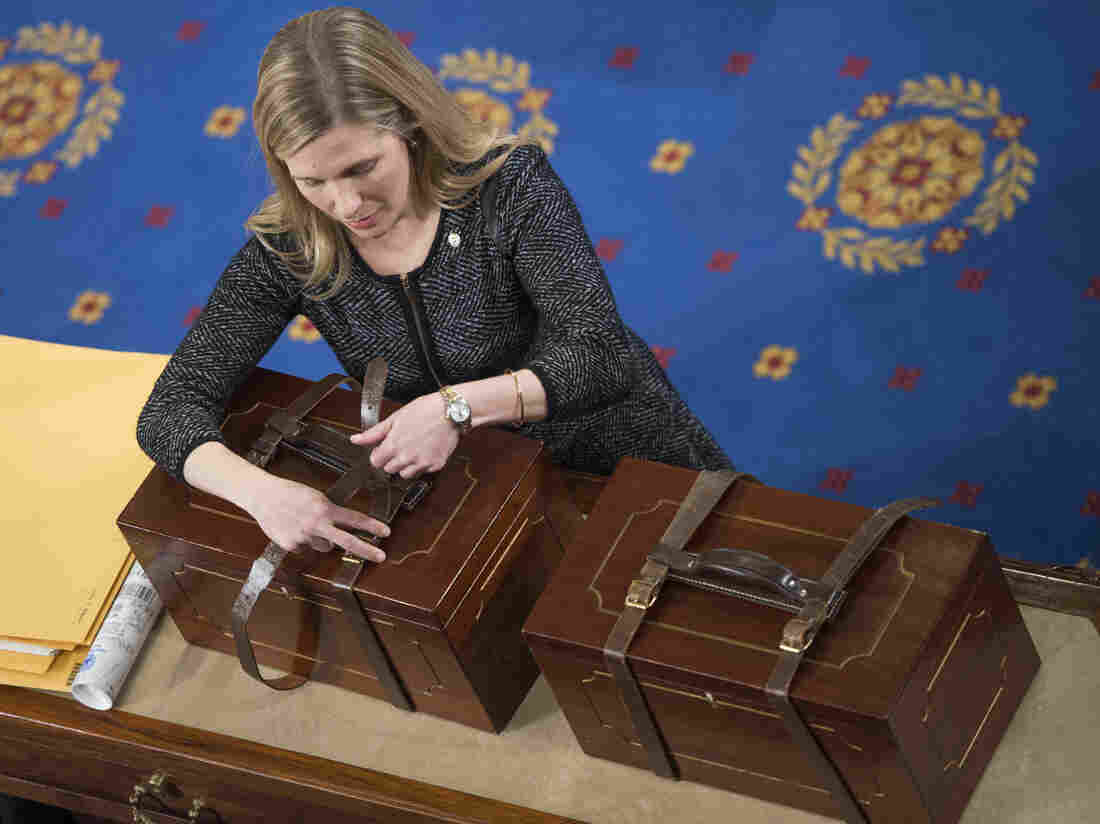 Connecticut is the latest state to pledge its electoral votes based on the outcome of the national popular vote. Here, an aide opens Electoral College ballot boxes during a joint session of Congress in January of 2017, to tally ballots for the president and vice president of the United States. Tom Williams/CQ-Roll Call Inc. hide caption 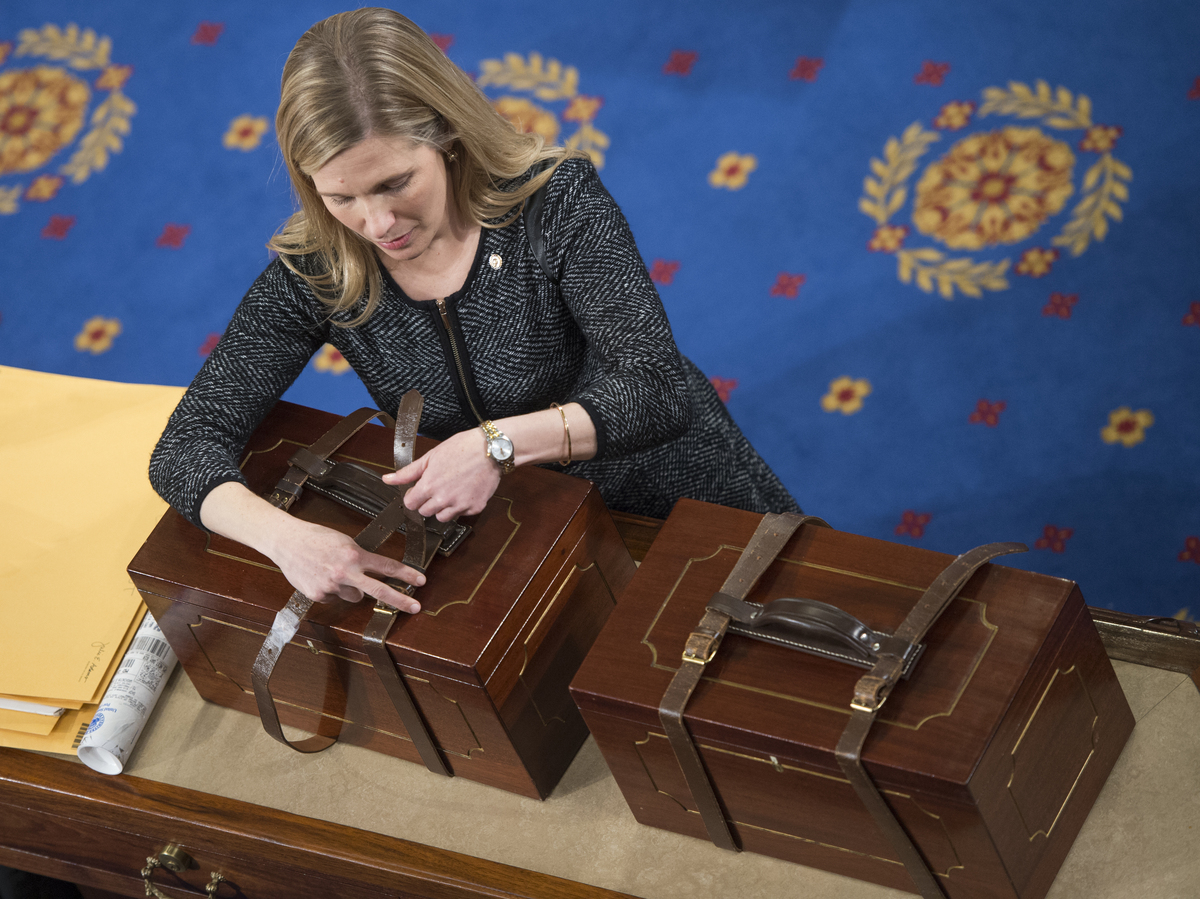 Connecticut is the latest state to pledge its electoral votes based on the outcome of the national popular vote. Here, an aide opens Electoral College ballot boxes during a joint session of Congress in January of 2017, to tally ballots for the president and vice president of the United States.

Connecticut is poised to commit its electoral votes to whichever U.S. presidential candidate wins the nation's popular vote — regardless of who wins the state.

By embracing the plan, Connecticut's General Assembly gave new momentum to a push to change the way Americans elect their president.

Ten states and the District of Columbia are already in a compact to pool their electoral votes and pledge them to the popular-vote winner. With Connecticut added, the compact's voting power would rise to 172 — fewer than 100 electoral votes away from the 270-vote majority that decides the presidential contest.

Connecticut's Senate gave final approval to the bill over the weekend, using a 21-14 vote to send the legislation to Gov. Dannel Malloy — who responded by saying, "I applaud the General Assembly for passing this commonsense legislation."

"With the exception of the presidency, every elected office in the country, from city council, to United States senator, to governor, is awarded the candidate who receives the most votes," Malloy said in a statement. "The vote of every American citizen should count equally, yet under the current system, voters from sparsely populated states are awarded significantly more power than those from states like Connecticut. This is fundamentally unfair."

The bill adopts an interstate compact that's officially called "The Agreement Among the States to Elect the President by National Popular Vote."

The agreement won't kick in unless it's backed by enough states and other voting areas to claim a majority of Electoral College votes.

In addition to Connecticut, the other jurisdictions in the pact are California, Hawaii, Illinois, Maryland, Massachusetts, New Jersey, New York, Rhode Island, Vermont and Washington state, along with Washington, D.C.

"If the Electoral College is abolished, the compact terminates," according to the Connecticut legislation.

Criticism of the Electoral College system has increased in recent years, after two presidential candidates — Democrats Al Gore in 2000 and Hillary Clinton in 2016 — won the popular vote but lost the electoral vote.

As NPR noted in 2016, it's mathematically possible for a candidate to win the U.S. presidency with less than 25 percent of the national popular vote.

All of the states that have so far committed to the pact are also states whose electoral votes went to Clinton in 2016.

Democrats have led the recent push to change the way the Electoral College works. But the National Popular Vote organization, which supports the move nationwide, says there is also bipartisan support for the bill.

President Trump also seems to have endorsed the concept, saying last month, "The Electoral College is different. I would rather have the popular vote, because it's — to me, it's much easier to win."

Those remarks echoed what Trump said weeks after his victory. In both instances, he added that the strategy and rules are very different for winning electoral and popular votes.

On its website, National Popular Vote says its goal is to fix "shortcomings of the current system," in which winner-take-all rules have resulted in dozens of states being ignored during presidential campaigns.

That system, the group says, means that "presidential candidates have no reason to pay attention to the issues of concern to voters in states where the statewide outcome is a foregone conclusion."

As proof, NPV points to data showing that in the 2012 general election, two-thirds of the campaign events were held in just four states: Ohio, Florida, Virginia and Iowa. Some 38 states "were ignored," the group said.

In addition to Trump and George W. Bush, those presidents are John Quincy Adams (1824 — with an asterisk), Rutherford Hayes (1876) and Benjamin Harrison (1888).

On the federal level, Congress hasn't substantially changed the Electoral College system since the process was remade by the 12th Amendment in 1804.

In the late 1960s, the U.S. House of Representatives overwhelmingly approved a resolution for an amendment establishing the direct election of America's president and vice president. The measure failed in the Senate.

Backers of that proposal included President Richard Nixon, who said after the House approval that "the need for electoral reform was 'urgent and should be our controlling consideration,' " as CQ Almanac reported in 1969.