In King Tut's Tomb, Hope For Hidden Chambers Is Crushed By Science

In King Tut's Tomb, Hope For Hidden Chambers Is Crushed By Science 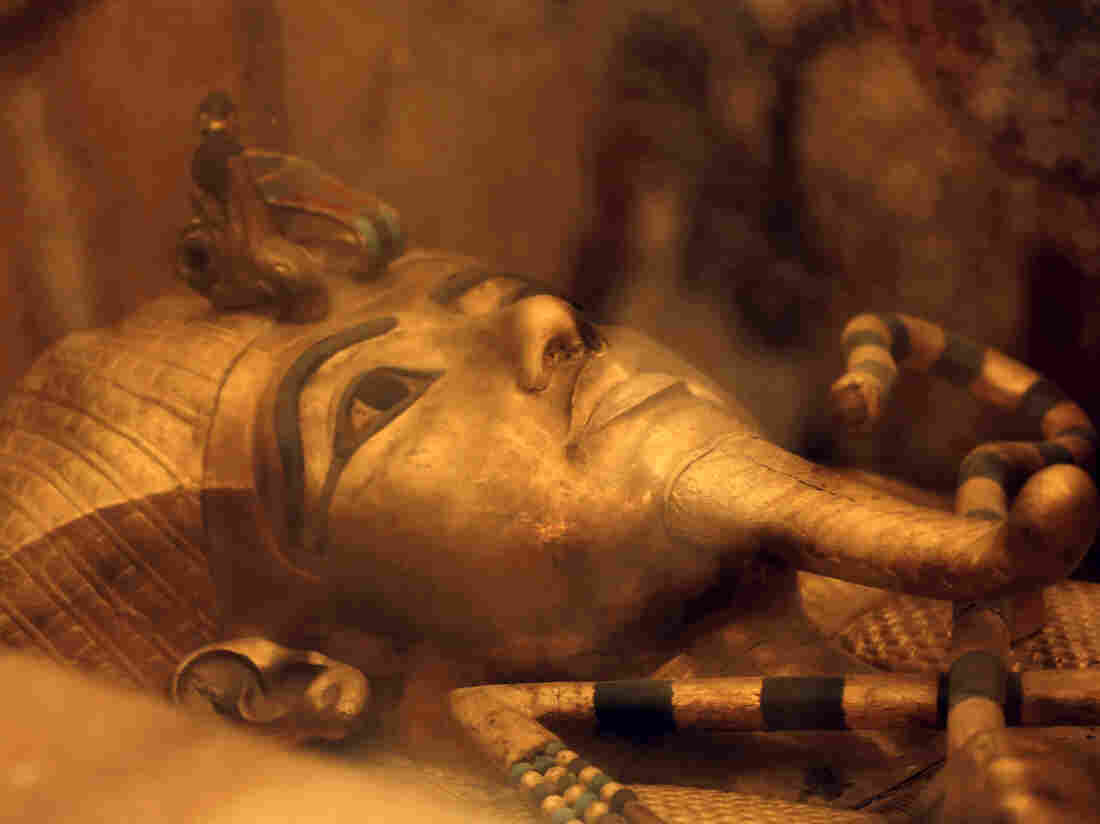 King Tutankhamun's golden sarcophagus displayed at his tomb in a glass case at the Valley of the Kings in Luxor, Egypt. New radar research published Sunday, indicates there are no hidden chambers in the tomb. Amr Nabil/AP hide caption 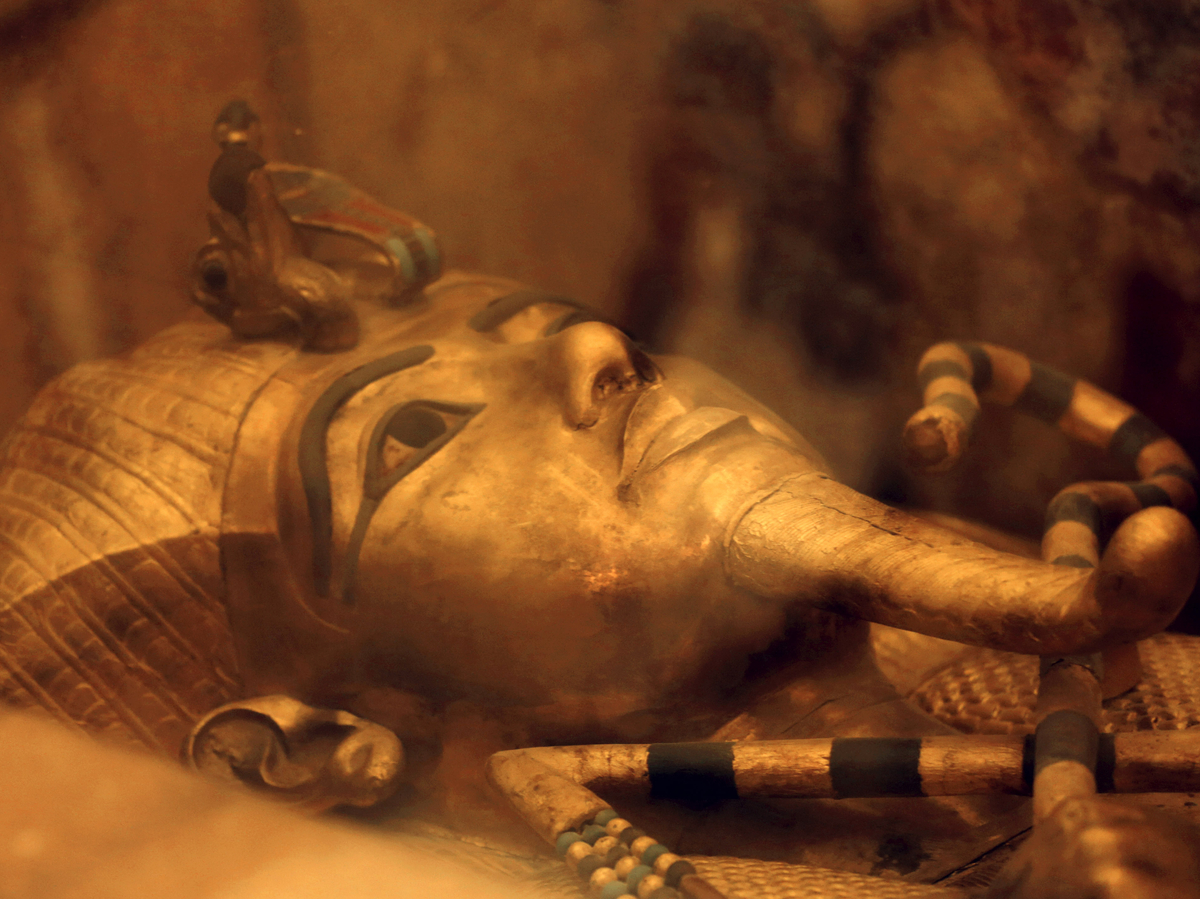 King Tutankhamun's golden sarcophagus displayed at his tomb in a glass case at the Valley of the Kings in Luxor, Egypt. New radar research published Sunday, indicates there are no hidden chambers in the tomb.

There are no hidden chambers or undiscovered treasures inside King Tutankhamun's tomb.

The famed boy pharaoh appears to have been buried without any other members of the royal family, according to the findings of a three-year-long radar study of the funeral chamber, according to the Egyptian Antiquities Ministry. The discovery was announced Sunday, at the fourth annual International Tutankhamun GEM Conference in Giza, Egypt.

The recent analysis puts an end to the controversial theory that the tomb first belonged to long-lost Queen Nefertiti, who's believed to be Tutankhamun's stepmother, aunt and mother-in-law. It was conducted as a joint effort with the National Geographic Society and spearheaded by Franco Porcelli from the Polytechnic University of Turin.

"It is maybe a little bit disappointing that there is nothing behind the wall of Tutankhamun's tomb, but I think on the other hand, that this is good science," Porcelli told Reuters TV. "And it proves that this type of technology ... can really make a significant impact on archaeology."

British Egyptologist Nicholas Reeves first proposed the idea that the 3,300 year-old-tomb, likely contained at least two hidden chambers, and first served as the final resting place for the beautiful queen before the young pharaoh was added some years later.

Initial findings seemed to support Reeves' hypothesis. A radar scan of the burial room by Hirokatsu Watanabe in November 2015 indicated there were two empty areas behind a series of elaborately painted murals in the main chamber that depict burial rituals.

As NPR reported, that discovery led Egypt's antiquities minister at the time to say that researchers were now 90 percent certain they'd find a secret chamber. But the government's enthusiasm was dampened after a second round of radar scans conducted by the National Geographic Society in April 2016, contradicted the first set of readings.

Now, the latest report, submitted to the current minister of antiquities over the weekend, resolves the debate once and for all. The study ends with the statement: "We conclude, with a very high level of confidence, that the hypothesis concerning the existence of hidden chambers adjacent [to] Tutankhamun's tomb is not supported by the [ground-penetrating radar] data."

Tom Hardwick, an Egyptologist living in Egypt who has been skeptical of Reeves' theories from the start, told NPR it is disappointing the tomb did not contain any evidence of Nefertiti because "it would have been one of the most remarkable discoveries of the century."

Anything having to do with the 18th dynasty of Egypt's New Kingdom era is going to capture the public's imagination, Hardwick said. But, he added, the upside of Porcelli's non-discovery discovery is that "now we know for sure."

The debate over Nefertiti's remains is another point of contention among Egypt experts, according to Hardwick. Some believe she is still buried near her stepson, untouched since the 14th century BC. Others contend her body has already been discovered and is exhibited as an unnamed female in Cairo's Egyptian Museum. Still others, including Hardwick, say there is ample evidence suggesting that because of her controversial and reviled role in history her original burial site, was likely destroyed centuries ago.

King Tut Felled By Injury And Malaria, Not Murder

After the discovery of Tutankhamun's mummy in 1922, the cause of his death remained a mystery until 2010. As NPR reported, DNA analysis and CT scans of the young pharaoh and some of his relatives, revealed that he probably died of a "raging case of malaria."

Additionally, the king was born with a cleft palate, a clubfoot and led a short but painful life, Howard Markel, director of the Center for the History of Medicine at the University of Michigan told NPR.

In an interview about the discoveries, Markel said:

"He probably had an orthopedic or bone disorder called Kohler's disease that leads to a poor circulation to the bones in the foot. He probably broke his foot and walked with a limp. And in fact, in King Tut's tomb there are several walking sticks, his own walking sticks. And they have wonderful evidence of wear and tear."

A collection of objects belonging to Tutankhamun — 4,549 pieces — have been transferred to the Grand Egyptian Museum, still under construction near the Giza Pyramids.