Accessibility links
In Election Upset, Malaysia's Mahathir Returns To Power After 15 Years : The Two-Way Mahathir Mohamad, who previously led Malaysia for more than two decades, has won a surprise victory over Prime Minister Najib Razak, who has been embroiled in a long-running corruption scandal. 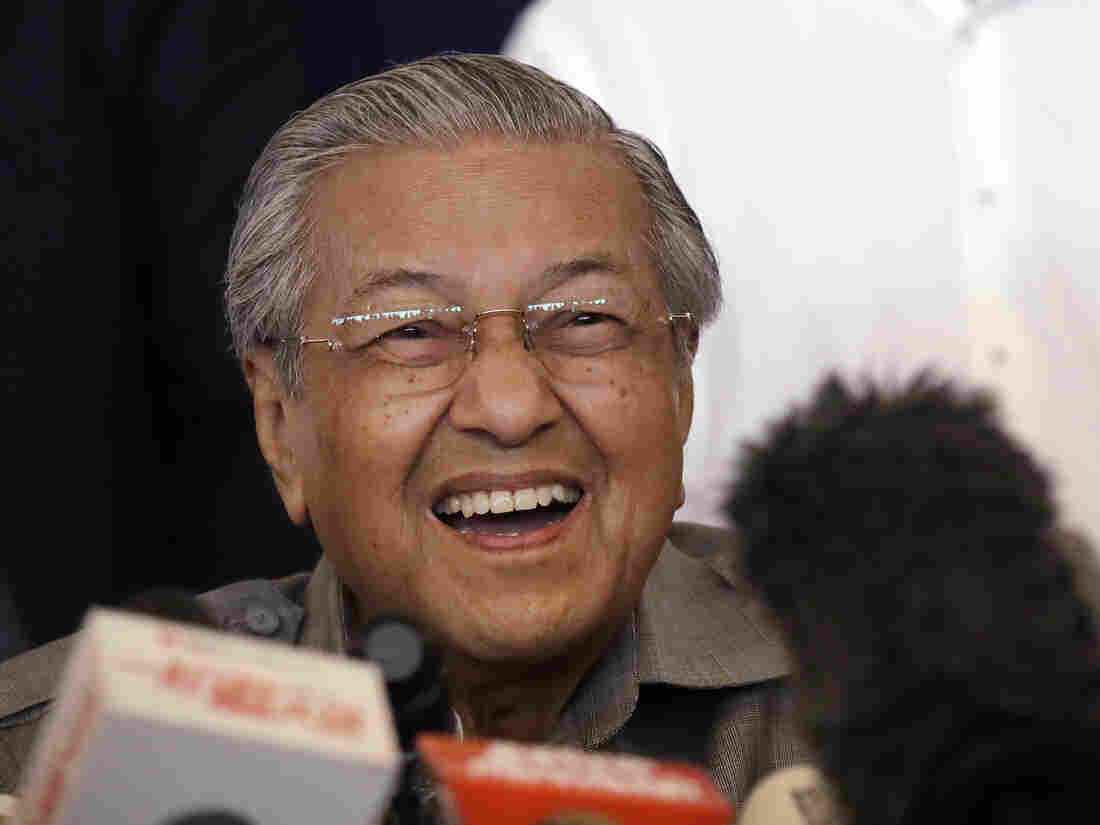 Mahathir Mohamad reacts as he speaks during a news conference in Kuala Lumpur, Malaysia, on Thursday, after his surprise victory. Andy Wong/AP hide caption 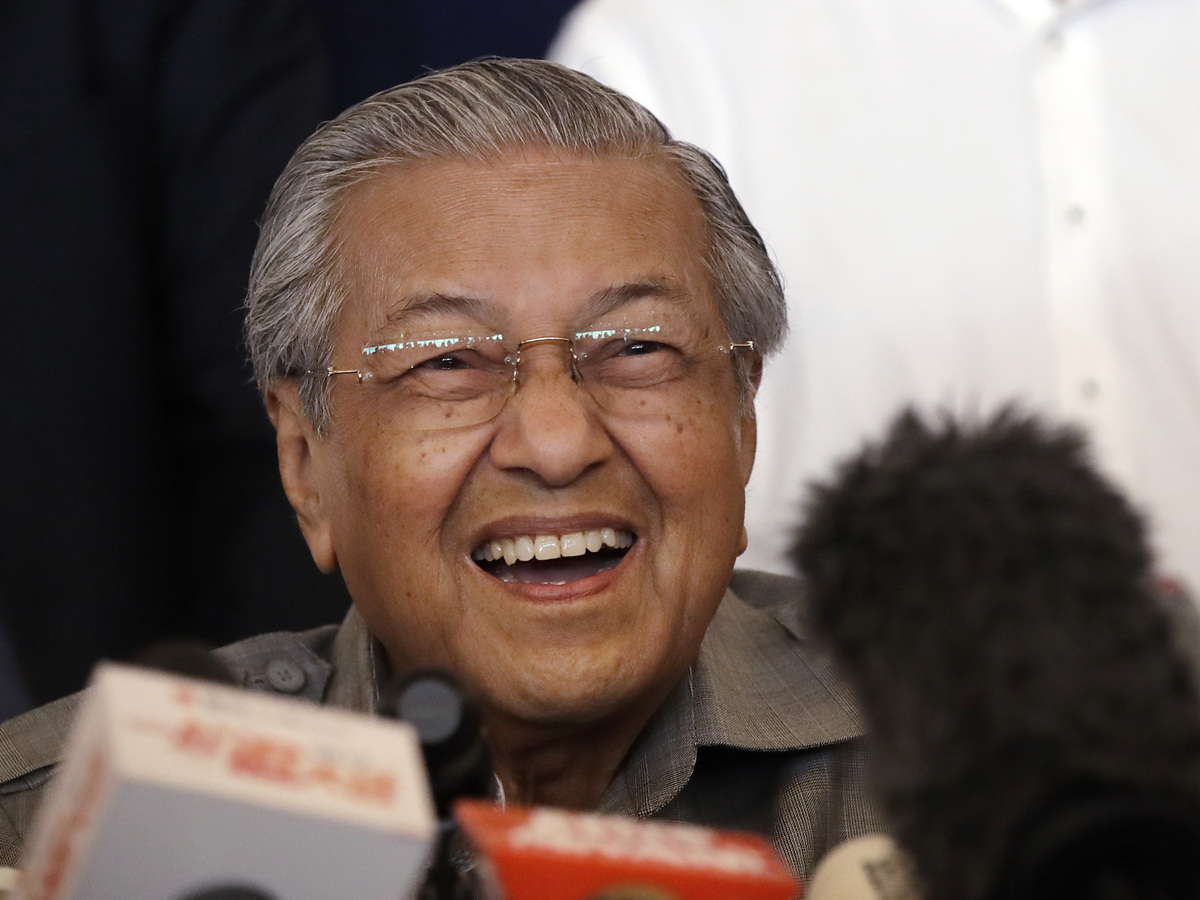 Mahathir Mohamad reacts as he speaks during a news conference in Kuala Lumpur, Malaysia, on Thursday, after his surprise victory.

Mahathir Mohamad, Malaysia's former prime minister who came out of retirement in his 90s to challenge his own party's embattled incumbent, has won a surprise victory in elections — ending more than six decades of rule by the country's dominant party.

Mahathir, who was already the country's longest-serving prime minister when he resigned in 2003, will become the world's oldest elected leader at 92 after defeating Prime Minister Najib Razak, who had been mired in a long-running and all-encompassing corruption scandal.

Although Mahathir has taken back the post he held previously for more than two decades as the head of the dominant United Malays National Organization-Barisan Nasional (National Front) coalition, this time he ran under a new party banner — the Pakatan Harapan (Alliance of Hope), and his win ushers in the first real change in government since Malaysia won independence from British rule in 1957.

Pakatan Harapan won a majority in parliament and is expected to sweep state elections once all the votes are counted.

In a news conference Thursday, Mahathir — who was often criticized for his heavy-handed rule in the past — says the win is a clear mandate to form a new government.

He expects to be sworn in as prime minister immediately. However, a technicality whereby Malaysia's king must first invite the premier because Mahathir's coalition only achieved a simple majority, could delay when the new leader takes over.

"There is an urgency here, we need to form the government now, today," Mahathir told reporters.

A defeated Najib, in his own press conference on Thursday, said he and his colleagues "accept the verdict of the people" and that his party "will honor the principle of democracy in the parliament."

Naijib, 64, was under massive pressure in the run-up to the election thanks to various allegations of corruption and misappropriation of billions in state funds in a scandal that became known as 1MDB and became subject to an investigation by the U.S. Justice Department.

The elections were made more contentious when Naijib and his party were accused of trying to skew election results in their favor by redrawing electoral lines based on race and ethnic grouping, while railroading an anti-Fake News bill through parliament.

That bill, one of the first of its kind passed in the world, allowed for up to six years in jail and fines as high as $130,000 for anyone found guilty by the government of spreading and publishing misleading information. The law saw one person prosecuted ahead of the election.

Furthermore, the opposition was afraid an election held mid-week would suppress voter turnout and many in the Malaysia diaspora were furious — who are allowed to vote absentee — about the length of time it took them to get their voting ballots.

As the results of the election started to roll in, supporters of Mahathir poured into the streets in celebration.

Bridget Welsh, a Southeast Asia expert at John Cabot University in Rome, told NPR that many of the voters were simply unhappy with the high cost of living and unpopular tax hikes, and embarrassed by the 1MDB scandal.

She says Malaysia has moved in a very brave direction.

"It's repudiated the government that's been in power for 61 years in a rout," she says. "And it's moving and I think it's entering a new period of its political history with a lot of enthusiasm and a lot of hope."

She told the Associated Press that Mahathir's run was a game-changer for the opposition.

"There is a massive swing across races. It's a big shift. This is a repudiation of Najib's government from all walks of life from the very rural northern states to the more industrial southern coast," she says. Though there is a sense of elation, people don't know what to make of it.

Umpagan Ampikaipakan, a Malaysian radio broadcaster with the country's only independent English-language talk radio station, spoke to NPR about the unique nature of the election outcome.

"This has never, ever happened. I don't think anyone was expecting it, because it's very similar to a kind of Brexit-Trump situation in that almost every opinion poll, almost every survey done, almost every op-ed written had Najib Razak returning to power, maybe [by] a slim majority," he says. "So this was quite a shock to most people."

Even so, Ampikaipakan says there is still a lot of unknowns about the opposition party's plans moving forward, especially in terms of economics and foreign policy, because there has never been anyone else in charge.

Ampikaipakan says he doesn't know what that means, though, under the Trump administration.

"Ironically, the relationship between Malaysia and America was probably the strongest during the reign of our outgoing prime minister Najib Razak," he says.

A previous headline said Mahathir Mohamad was returning as prime minister after a quarter century. In fact, he last held the office in 2003.