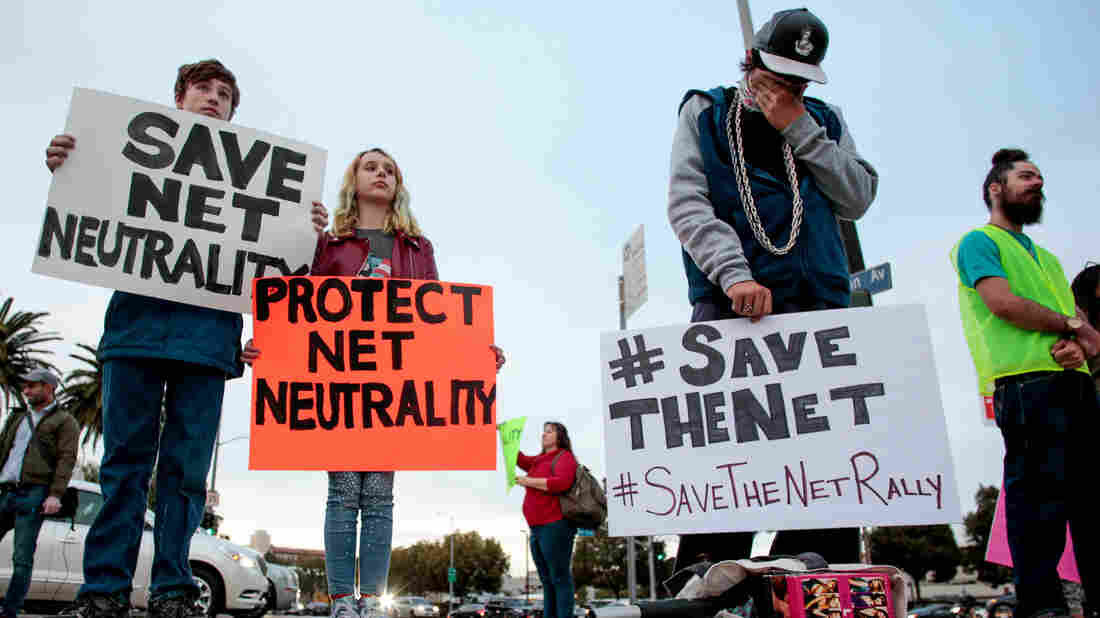 Senate Democrats say they have the votes to formally disapprove of the FCC's Internet policy that will take effect next month. Here, supporters of net neutrality protest the decision to repeal the Obama-era rule. Kyle Grillot/Reuters hide caption 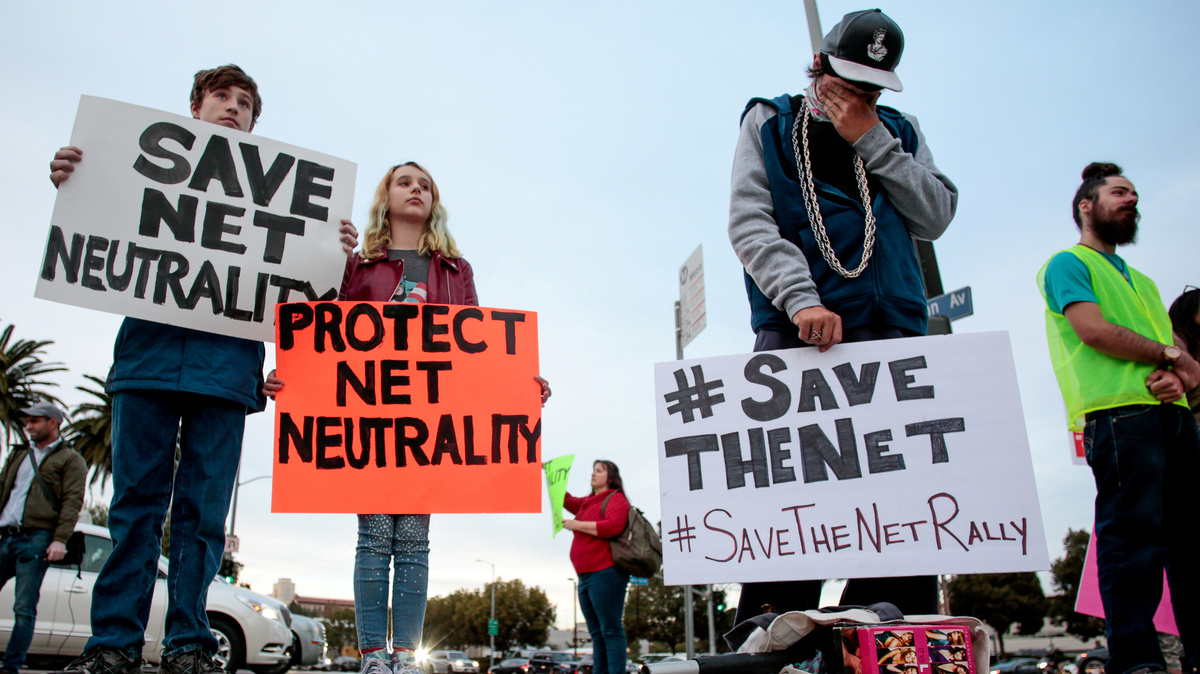 Senate Democrats say they have the votes to formally disapprove of the FCC's Internet policy that will take effect next month. Here, supporters of net neutrality protest the decision to repeal the Obama-era rule.

The Senate approved a resolution Wednesday to nullify the Federal Communications Commission's net neutrality rollback, dealing a symbolic blow to the FCC's new rule that remains on track to take effect next month.

The final vote was 52-47. As expected, Sen. Susan Collins, R-Maine, joined Democrats in voting to overturn the FCC's controversial decision. But two other Republicans — Sen. John Kennedy of Louisiana and Sen. Lisa Murkowski of Alaska — also voted in favor of the resolution of disapproval.

The outcome is unlikely to derail the FCC's repeal of Obama-era rules that restrict Internet service providers' ability to slow down or speed up users' access to specific websites and apps.

The legislative victory is fleeting because the House does not intend to take similar action, but Democrats are planning to carry the political fight over Internet access into the 2018 midterms.

"Today is a monumental day," said Sen. Edward Markey, D-Mass., during debate over the resolution. "Today we show the American people who sides with them, and who sides with the powerful special interests and corporate donors who are thriving under this administration."

Critics of the FCC rollback say they're worried about consumers being forced to pay more for less consistent or slower service. FCC Chairman Ajit Pai, part of the Republican majority, has said the Obama rule was "heavy-handed" and isn't needed.

Markey described a coalition of Internet voters who bridge the usual philosophical party lines when it comes to government regulation. "The grandparents, the gamers, the gearheads, the geeks, the GIF-makers, the Generations X, Y, and Z. This movement to save net neutrality is made up of every walk of American life," he said.

Republicans overwhelmingly support ending net neutrality because they want to shift regulatory power away from the federal government and toward the private market. Republicans also argue that Democrats are playing on unfounded fears that Internet service providers will jack up costs and anger their consumer base. "If the Democrats want to run on regulating the Internet, I think that's a losing strategy," said Sen. Cory Gardner, R-Colo., who runs the Senate GOP's 2018 campaign operation and voted against the resolution.

This issue doesn't cut along clean party lines, said Steven Kull, who runs the Program for Public Consultation at the University of Maryland and has studied public attitudes on net neutrality. The program's research has found that majorities of Americans support government-mandated net neutrality protections.

"People are on the Internet a lot and it's a big part of their daily experience and the prospect that it will be changed in some fundamental way is disturbing to quite a lot of them," Kull said.

Fear is a great motivator for voters. Senate Democrats believe their resolution that put every Democrat on record in support of net neutrality — and most Republicans on record against it — can turn what was once considered a wonk issue into a wedge issue this November. "People underestimate the passion of Internet voters, at their peril. They are mad, and they want to know what they can do, and this vote will make things crystal clear," he said.

Republicans like Rep. Scott Taylor of Virginia think Democrats are wrong on the policy of net neutrality and that eliminating FCC rules will expand competition and consumer choice. However, he concedes that Democrats have done a better job of selling their message to voters and says there could be consequences if Republicans don't engage more directly with voters on an issue they care about.

"It's important Republicans have a clear and concise message to tell them why net neutrality, while it sounds good, and maybe it's even well-intended, is not the right answer for them," Taylor said.

Net neutrality doesn't make for catchy campaign slogans, but there are indicators that voters are clocking this issue. According to data provided by Google, net neutrality regularly ranks among top political searches in each state.

In Pennsylvania and Nebraska, which held their primary elections on Tuesday, it ranked second in political searches behind health care. "This is one of those areas where Washington, D.C., sometimes gets in a bubble and doesn't recognize what's going on in the rest of the country," said Sen. Chris Van Hollen, D-Md., who runs the Senate Democrats' 2018 campaign operation.

Kull is more skeptical that net neutrality will be a potent voter motivator this year unless people start to see changes to their Internet costs, speed or access. Voters may know soon enough: The Obama-era net neutrality rules expire June 11.