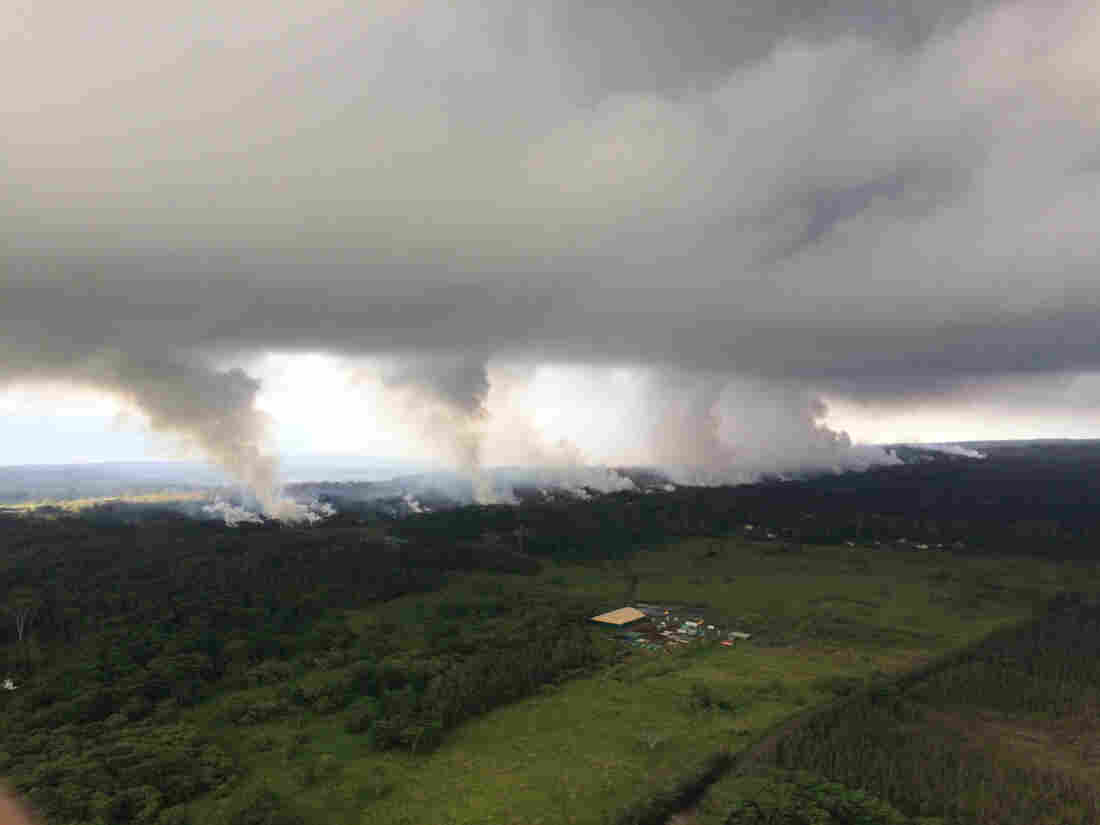 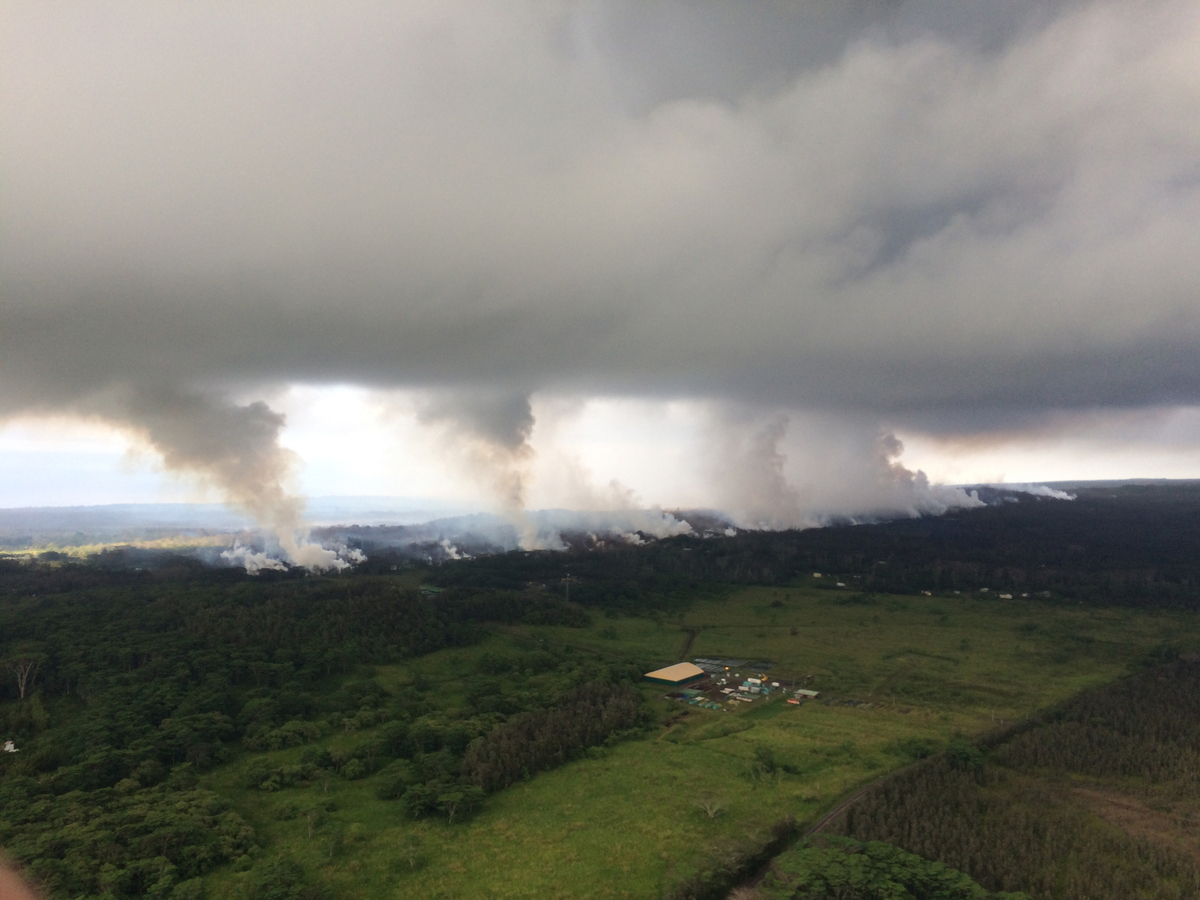 An image provided by the U.S. Geological Survey shows sulfur dioxide plumes rising from Kilauea's fissures along the rift and accumulating in the cloud deck, viewed from a Hawaiian Volcano Observatory overflight on Wednesday.

Just after 4 a.m. local time Thursday an explosion within Kilauea's Halemaumau crater on the island of Hawaii produced a volcanic cloud reaching as high as 30,000 feet, according to the U.S. Geological Survey .

The National Weather Service issued an ashfall advisory for the surrounding area until early evening, meaning accumulations of less than a quarter inch were expected.

Hawaii emergency officials urged area residents to shelter in place if possible, warning that driving conditions could be dangerous.

Warning from @CivilDefenseHI that an explosive eruption has occurred at #Kilauea. Ash plume expected to spread to SE. Driving conditions may be dangerous. Shelter in place if you can.

Hawaii's Department of Transportation said the wind was carrying the ash plume in a southeasterly direction, and if drivers should find themselves caught in it, they should pull over and wait until it passed.

Bill Dorman of Hawaii Public Radio reports that some residents awoke to a blanket of ash that when combined with rain, "can produce a sort of gritty clay — complicating everything from driving to local water catchment systems."

Experts advised those downwind to seal windows and doors, and if unable to avoid going outside to cover noses and mouths with a mask or cloth.

USGS says the crater could continue to produce more emissions reaching as high as 12,000 feet.

Looks like a moonscape at the old Halema‘uma‘u parking lot; rock and ash from the explosive event last evening, May 15, Kīlauea summit. https://t.co/yEUJFxRqfC pic.twitter.com/syCe7ruqSw

A day earlier, "ballistic blocks" shot from Kilauea's same crater, according to USGS, which says it is the first time such an event has been seen at the Hawaiian volcano in nearly a century. 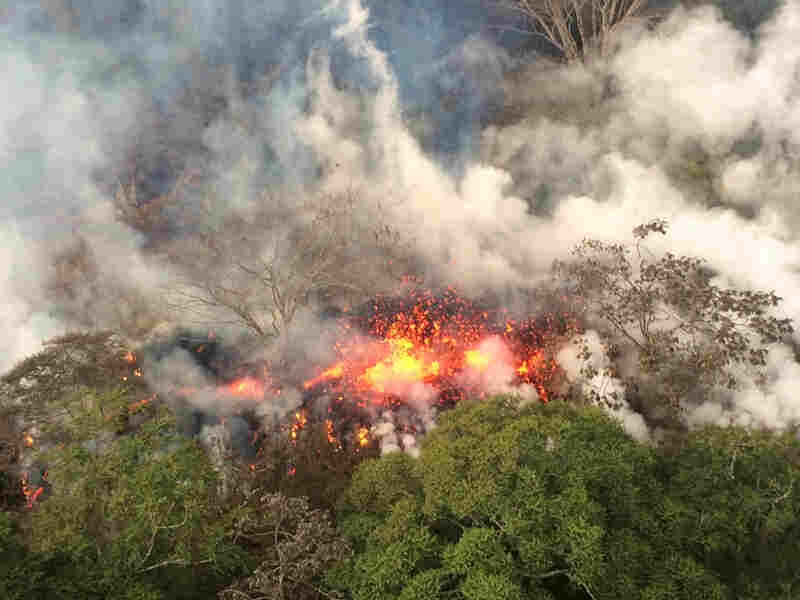 Another image provided by USGS shows lava spattering from an area between active Fissures 16 and 20 photographed at 8:20 a.m. HST, on the lower east rift of the Kilauea volcano, near Pahoa, Hawaii, on Wednesday. AP hide caption 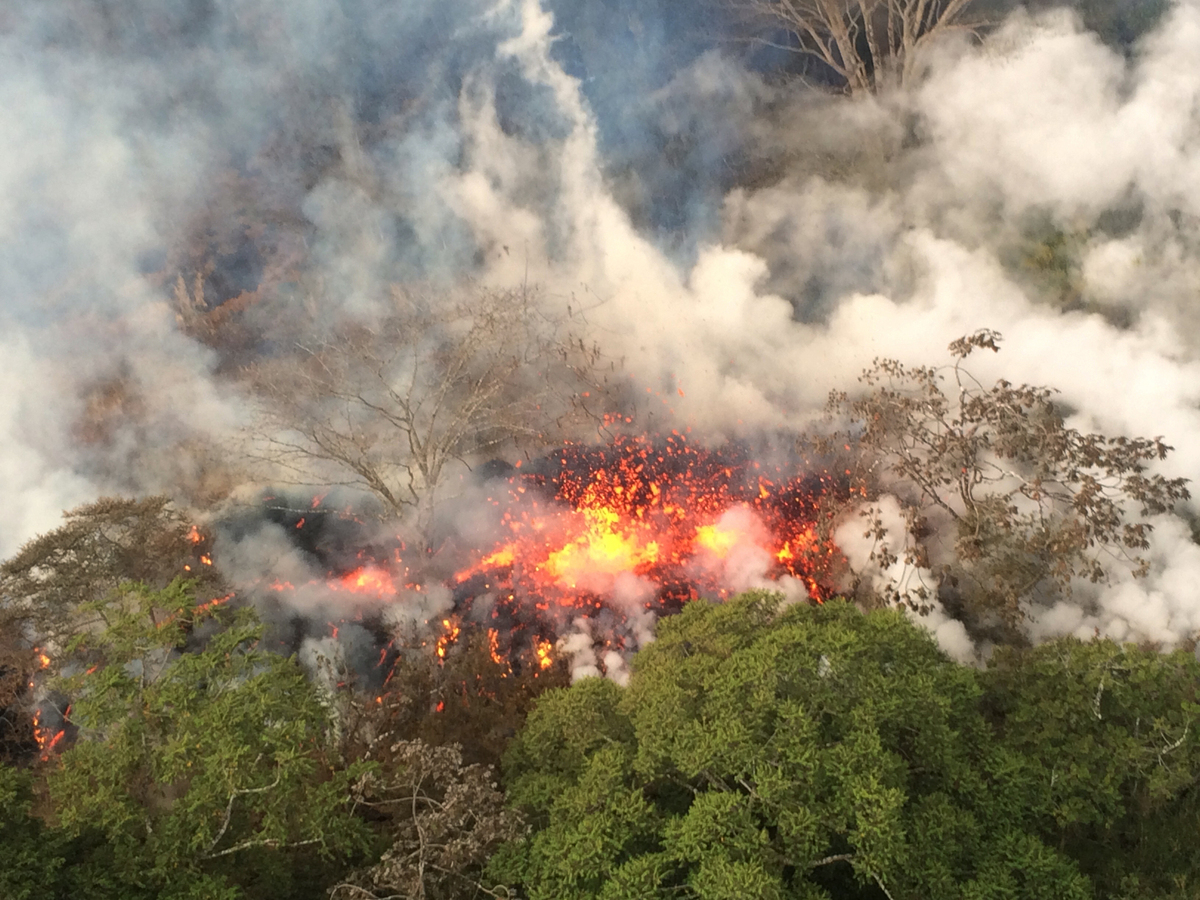 Another image provided by USGS shows lava spattering from an area between active Fissures 16 and 20 photographed at 8:20 a.m. HST, on the lower east rift of the Kilauea volcano, near Pahoa, Hawaii, on Wednesday.

"This morning dense ballistic blocks up to 60 cm (2 feet) across were found in the parking lot a few hundred yards from Halemaumau," USGS wrote in an advisory on Wednesday. "These reflect the most energetic explosions yet observed and could reflect the onset of steam-driven explosive activity."

"Further observations are necessary to assess this interpretation. Additional such explosions are expected and could be more powerful," it cautioned.

A 4.2-magnitude earthquake struck the region early Wednesday and another 3.5-magnitude temblor was felt around noon. The quakes "caused noticeable structural damage" in buildings at the state's Hawaii Volcanoes National Park, according to Hawaii Public Radio.

"Geologists say the quakes are being caused by the ongoing deflation at the summit and as lava levels continue to decline. As of Wednesday afternoon, the floor of the Kilauea caldera has dropped about 3 feet.

"Because the tremors are shallow, they cause greater shaking — and increase the potential for damage."

Plumes of sulfur dioxide gas at Kilauea have caused "vog" and volcanic ash – which can be destructive to aircraft engines — prompting USGS on Tuesday to raise its aviation alert level to "red." However, the ash did not affect regular commercial air service in Hawaii, Federal Aviation Administration spokesman Ian Gregor said in an email to Reuters.

"Smog from Kilauea drifted north up the island chain as the districts of Kau, Puna, and North and South Hilo were told by the National Weather Service to expect ashfall. Hawaii County Civil Defense said a dusting of ash was visible on property and advised residents to avoid exposure to the powdered rock, which can cause irritation to eyes and airways," according to the news agency.

USGS has warned that steam-driven eruptions could hurl boulders weighing as much as 12 tons up to a half mile from the crater.

Kilauea has been active since it began spewing lava into a residential area earlier this month. But the youngest volcano on the island of Hawaii actually has a long history of eruptions dating back thousands of years.

USGS says since the 1980s, "eruptive activity has been continuous along the East Rift Zone" and the volcano ranks among the world's most active.