Accessibility links
Banned Ozone-Depleting Chemical Is Still Being Produced Somewhere, Scientists Say : The Two-Way Trichlorofluoromethane, or CFC-11, hurts the ozone layer and was phased out of production by 2010. Supposedly. But a NOAA study says CFC-11 emissions began to rise after 2012. 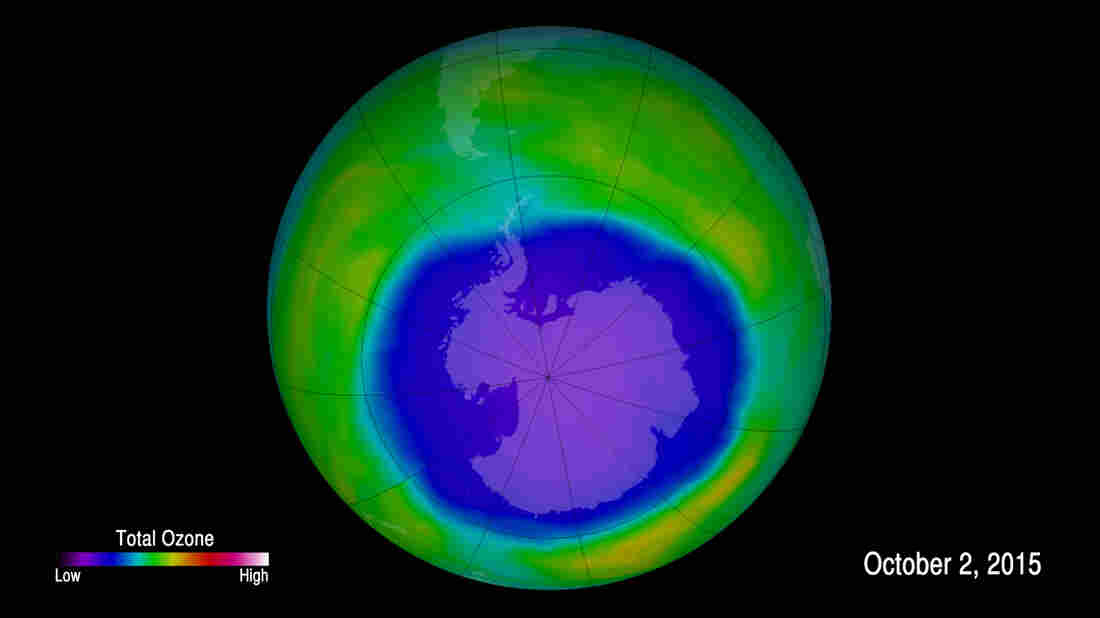 An image provided by NOAA shows the hole in the ozone layer in 2015. NOAA scientists now say emissions of one ozone-depleting chemical appear to be rising, even though the chemical has been banned and reported production has essentially been at zero for years. NOAA via AP hide caption 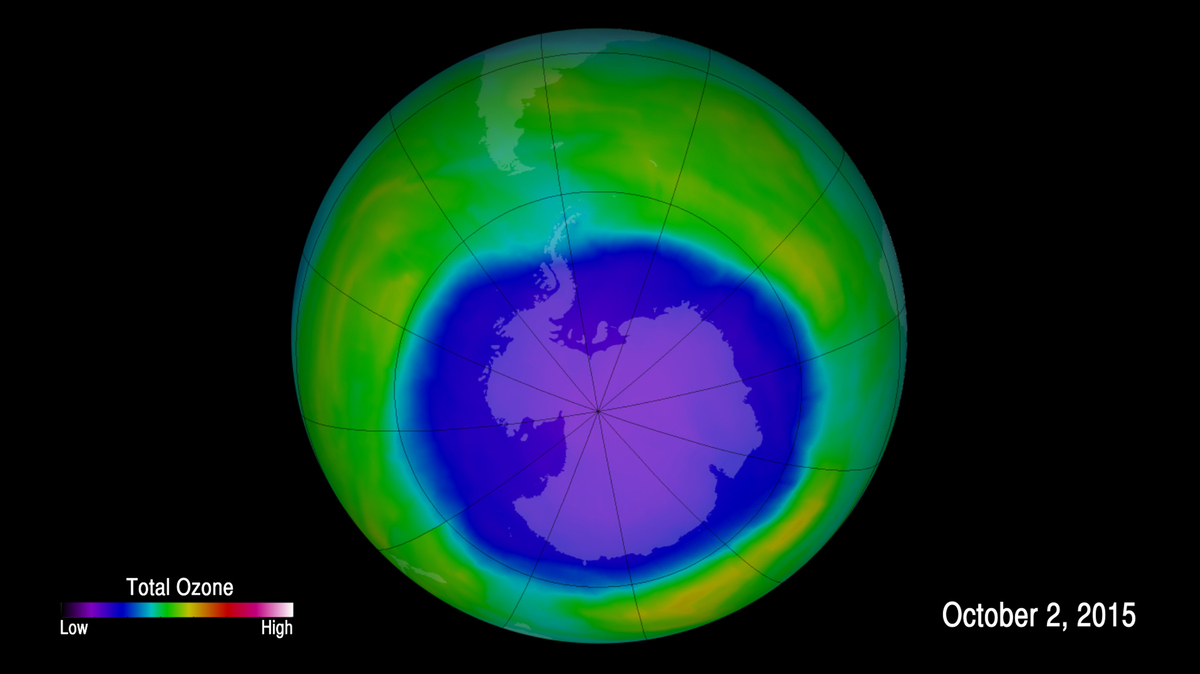 An image provided by NOAA shows the hole in the ozone layer in 2015. NOAA scientists now say emissions of one ozone-depleting chemical appear to be rising, even though the chemical has been banned and reported production has essentially been at zero for years.

Someone appears to be producing a banned ozone-depleting chemical, interfering with the recovery of Earth's damaged ozone layer, according to a newly published study led by scientists with the National Oceanic and Atmospheric Administration.

The illicit emissions are believed to be coming from somewhere in eastern Asia, but nothing else is known about the offender. It's a scientific whodunit — or rather, a who's-doing-it.

"I think it's the most surprising thing I've seen in my 27 years of making measurements of trace gases in the atmosphere," Stephen Montzka, the study's lead author, tells NPR.

In the study, published in Nature on Wednesday, the scientists say the atmospheric level of trichlorofluoromethane, or CFC-11, is still dropping overall. But it's not declining as quickly as it should be.

"It appears that emissions of CFC-11 have increased in recent years, which is quite a surprise given the fact that production has been phased out — reportedly," Montzka says.

CFCs, or chlorofluorocarbons, "were once widely used in the manufacture of aerosol sprays, as blowing agents for foams and packing materials, as solvents, and as refrigerants," according to a news release.

But scientists realized the chemicals were harming the ozone layer, which filters out harmful UV rays that can increase the risk of skin cancer (and, if left unchecked, would interfere with agriculture and ecosystems). So in the late 1980s, the world agreed to phase out the use of the chemicals, including CFC-11.

Some CFC-11 still exists in insulation and older appliances, according to the researchers. But production was supposed to have stopped as of 2010. That means the amount of CFC-11 in the atmosphere should be declining more and more each year, allowing the ozone layer to replenish. 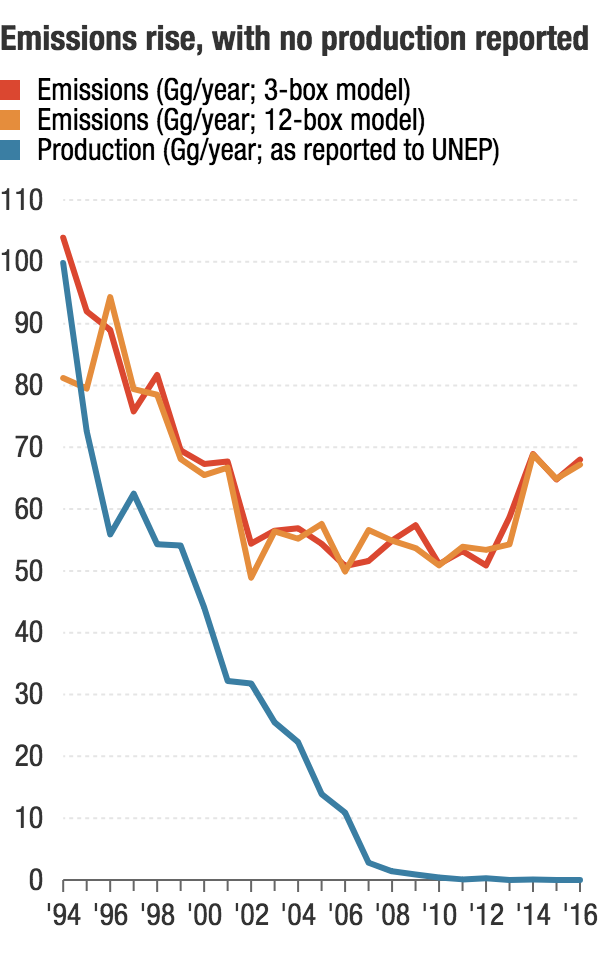 Data from an NOAA study shows that emissions of CFC-11 — as calculated using two different models — rose after 2012, even though production was supposedly phased out. Figure 2, Panel a, Montzka et al., 2018; NOAA hide caption

But the rate of reduction is slowing, which doesn't fit with expectations. The scientists analyzed measurements from 12 different sites and concluded that CFC-11 emissions started to increase after 2012, two years after production of the chemical was reportedly at zero.

Their data indicate the source is north of the equator and probably in eastern Asia.

Montzka says it's possible the production is accidental, but it also might be the result of an intentional violation of the Montreal Protocol.

The next step for atmospheric researchers is to try to narrow down the source of the emissions, with help from scientists across eastern Asia, Montzka says.

The U.N. Ozone Secretariat says it is "critical" to "identify the causes of these emissions and take necessary action."

"It is important to note that these findings also highlight the efficacy of the Montreal Protocol, its institutions and mechanisms, with science at their core," the secretariat says. "So long as scientists remain vigilant, new production or emission of ozone-depleting chemicals will not go unnoticed."

Noticing the problem is not the same as fixing it, however.

The Montreal Protocol has been a remarkably effective agreement. But David Victor, a professor of international relations at the University of California, San Diego, says there is no easy way for the international community to crack down on violations.

If a country is willfully violating the protocol, "there's an enforcement mechanism, but it doesn't really have any teeth," Victor tells NPR. "You can file reports, threaten trade sanctions. ... At the end of the day, if a country is really committed to violating an agreement, they can probably do that."

Another likely scenario is that a government wants to enforce the ban but lacks the enforcement capacity to crack down on illegal production. That has been an issue with the Montreal Protocol before.

"As CFCs have been regulated out, the value of them on the black market has gone up," Victor explains. "It's not too different from running a drugs business."

In that case, other countries can offer technical assistance, but "it's very hard for an outside country to go in .... and engage in enforcement activities," Victor says.