'They Were All Slaughtered': Amnesty Says Rohingya Militants Massacred Hindus

'They Were All Slaughtered': Amnesty Says Rohingya Militants Massacred Hindus 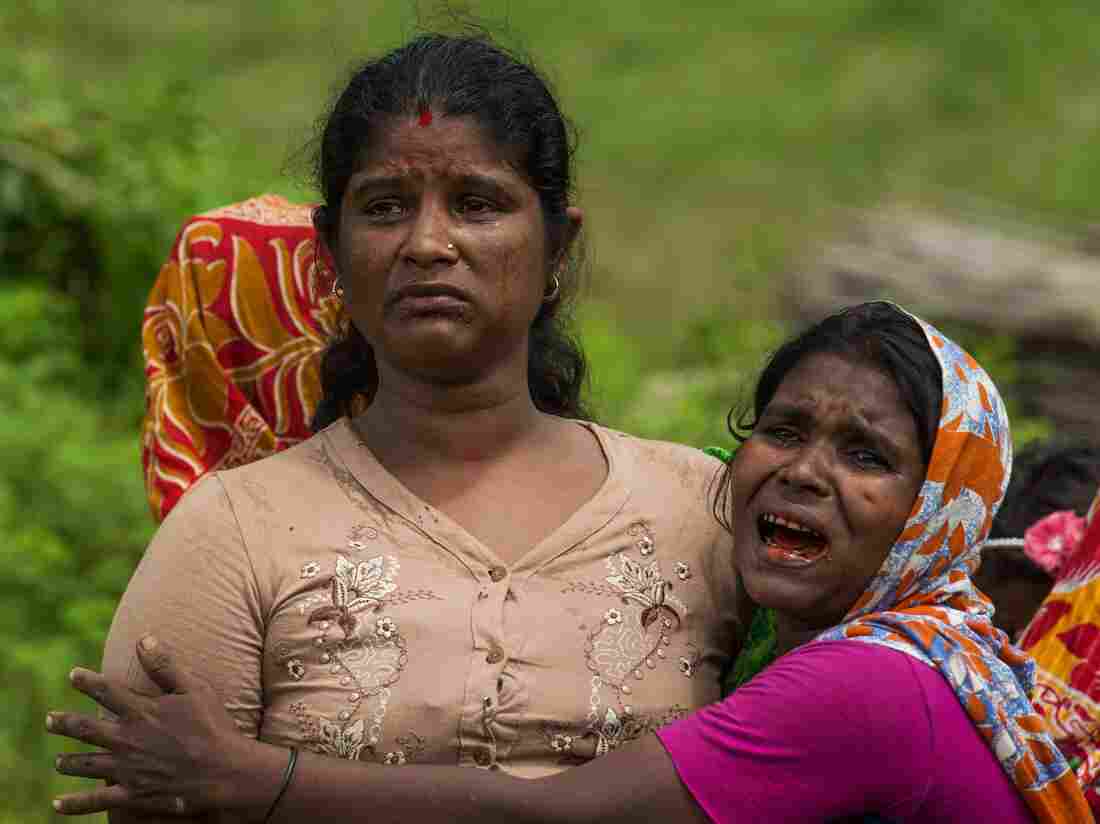 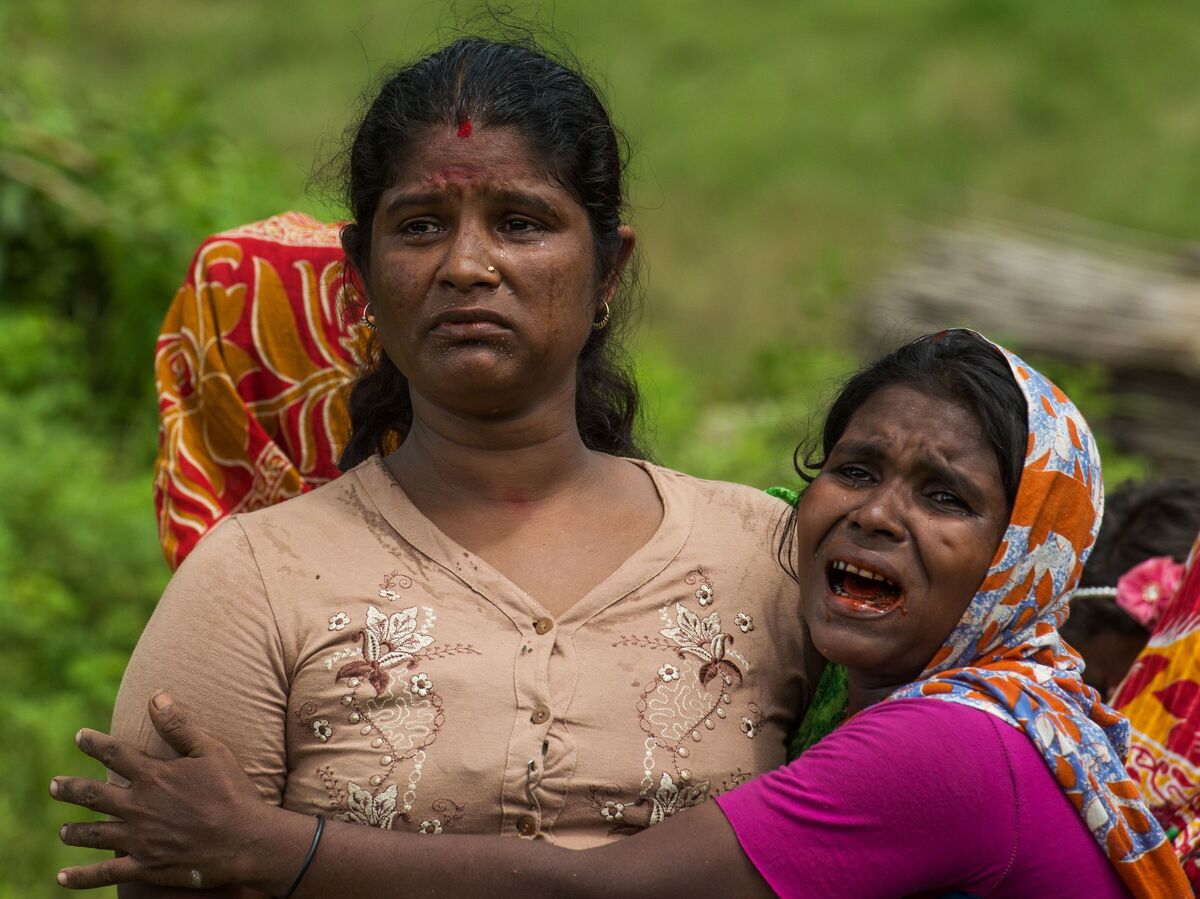 Hindu women cry at the site of a mass grave that Myanmar troops said they found last September in Maungdaw township. Amnesty International says local village leaders identified dozens of corpses unearthed from the graves the week before.

Last September, military officials in Myanmar told international journalists that they had found a mass grave of Hindus in Rakhine state, a month after the country began a bloody crackdown on the minority Rohingya Muslim population.

There, in the center of a region already submerged in widespread violence, troops gathered local Hindus in a field to identify dozens of bodies, many of whom were the residents' friends and family.

The Myanmar military blamed the massacre on a Rohingya insurgent group, Arakan Rohingya Salvation Army, based in the area which had launched a series of attacks on security outposts the month before. But the military's announcement made little impression at the time. Myanmar was already allegedly carrying out atrocities of its own in response to the attacks, opening a brutal operation described by the United Nations and others as ethnic cleansing against the Rohingya.

Now, however, Amnesty International says it has confirmed that the Rohingya armed group "is responsible for at least one, and potentially a second, massacre of up to 99 Hindu women, men, and children as well as additional unlawful killings and abductions of Hindu villagers in August 2017."

Kites, Prayers, A Snake Show: Reporting From The Rohingya Camps

"Armed men dressed in black and local Rohingya villagers in plain clothes rounded up dozens of Hindu women, men and children. They robbed, bound, and blindfolded them before marching them to the outskirts of the village, where they separated the men from the women and young children," Amnesty explains. "A few hours later, the ARSA fighters killed 53 of the Hindus, execution-style, starting with the men."

Eight women and their children were abducted and allowed to live on the condition that the women convert to Islam, Amnesty reports. The survivors were then forced to flee to Bangladesh with their captors, eventually gaining their freedom with the help of fellow Hindu community members and Bangladeshi security forces.

"They had knives. They also had some spades and iron rods. ... We hid ourselves in the shrubs there and were able to see a little," an 18-year-old survivor told the rights group. "My uncle, my father, my brother — they were all slaughtered."

Amnesty says the victims included nearly two dozen children, 14 of whom were under the age of 8 years old. All told, 45 bodies have been excavated, and dozens of other people who disappeared from a neighboring village "are presumed to have been killed by the same perpetrators." 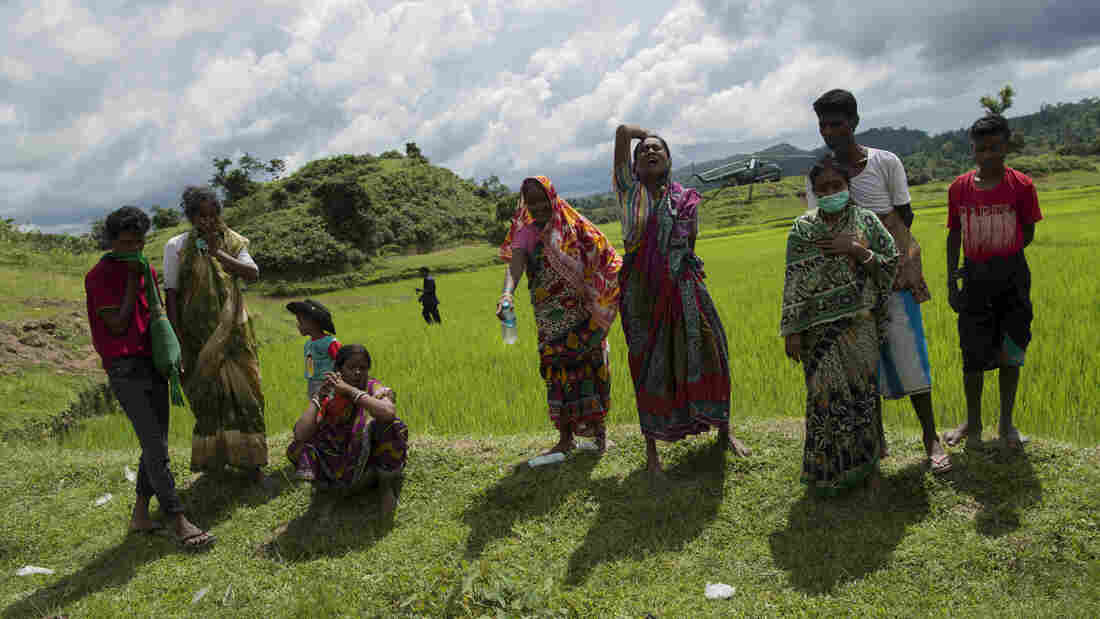 Hindu residents react in grief when shown the bodies of their dead family members in Maungdaw township last September, shortly after Myanmar's military announced that it had discovered a mass grave in Rakhine state. AFP Contributor/AFP/Getty Images hide caption 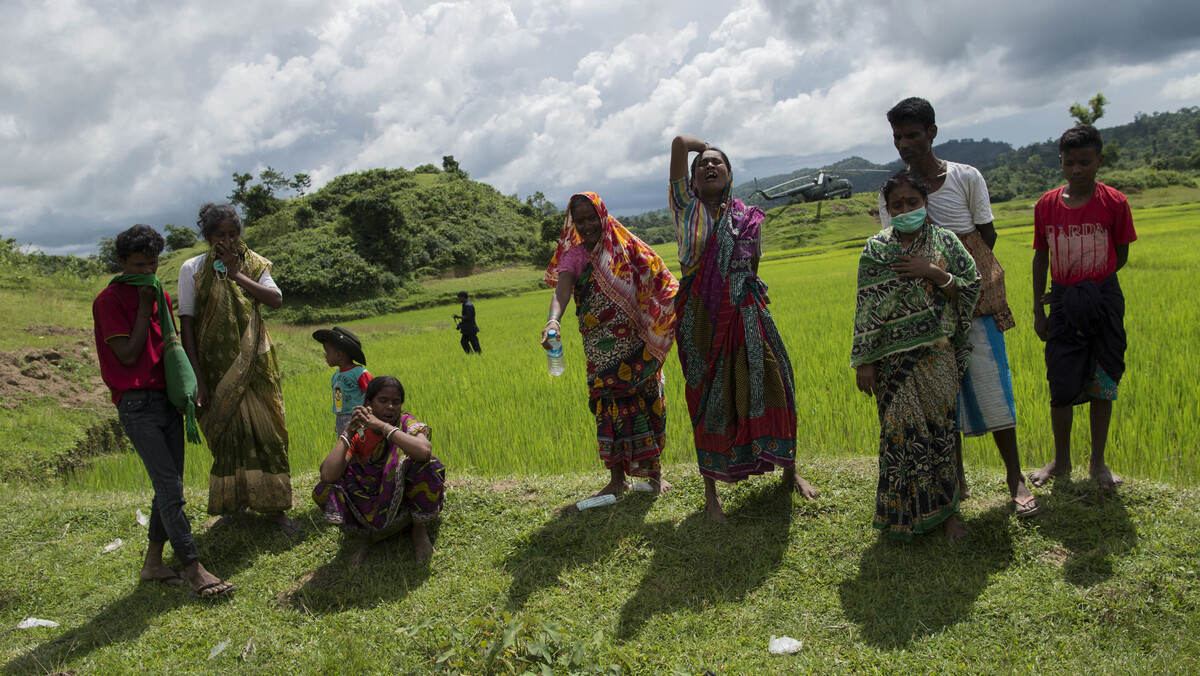 Hindu residents react in grief when shown the bodies of their dead family members in Maungdaw township last September, shortly after Myanmar's military announced that it had discovered a mass grave in Rakhine state.

As NPR reported in the months that followed, the Myanmar military embarked on a broad campaign of violent reprisal. To date, some 700,000 Rohingya refugees have fled across the border into Bangladesh, where most still live in dilapidated, disease-haunted camps and tell harrowing stories of the military's systematic murder, rape and torture of Rohingya Muslims.

U.N. representatives and other international officials have described Myanmar's actions as crimes against humanity.

"I am becoming more convinced that the crimes committed following 9 October 2016 and 25 August 2017 bear the hallmarks of genocide," Yanghee Lee, U.N. special rapporteur to Myanmar, said in a statement. Her remarks came following an independent fact-finding mission released its report on the situation in Myanmar.

As The Washington Post points out, the grim results of that violence are set to become increasingly apparent — in a way that's expected to give rise to even more health dangers for the refugees who are packed into the already overcrowded refugee camps. Roughly 13,500 Rohingya women endured sexual violence at the hands of Myanmar troops, according to the U.N. Population Fund. The international aid group Save the Children anticipates that this year at least 48,000 Rohingya babies will be born in the makeshift settlements set up in Bangladesh.

"The peak of rape was August, so we're expecting to see a surge of women delivering this month," Daniella Cassio, a midwife with Doctors Without Borders told the Post.

Amnesty International, for its part, asserts that the atrocities committed by Rohingya militants by no means mitigate the extreme violence with which Myanmar responded.

"Both must be condemned – human rights violations or abuses by one side never justify abuses or violations by the other," Tirana Hassan, the group's crisis response director, said in a statement. "All the survivors and victims' families have the right to justice, truth, and reparation for the immense harm they have suffered."