Accessibility links
ACLU Report: Detained Immigrant Children Subjected To Widespread Abuse By Officials : The Two-Way Government documents released under the Freedom of Information Act reveal a pattern of abuse, says the ACLU. The government says its investigations found no evidence of misconduct. 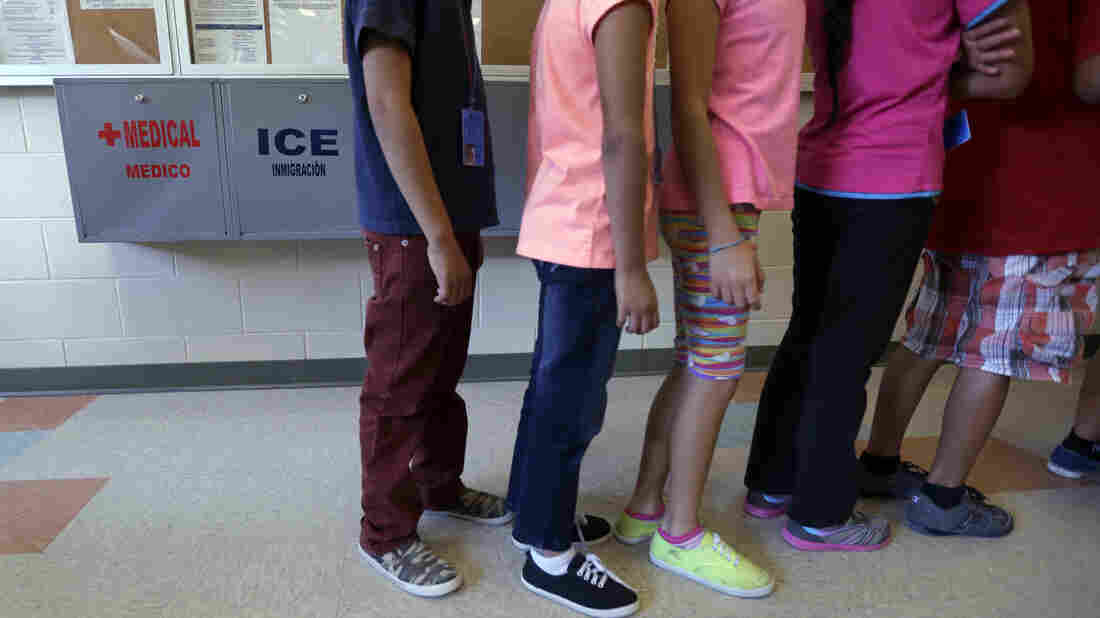 Detained immigrant children line up in the cafeteria at a temporary home for immigrant women and children detained at the border, in Karnes City, Texas. Eric Gay/AP hide caption

Immigrant children in the custody of U.S. border authorities allegedly suffered pervasive abuse ranging from insults and threats to physical assaults, according to documents reviewed by the American Civil Liberties Union.

A report released this week by the ACLU is based on more than 30,000 pages of documents obtained through the Freedom of Information Act. The documents, it says, "expose of culture of impunity" within U.S. Customs and Border Protection and the Department of Homeland Security.

In response, Customs and Border Protection issued a strongly worded statement in which it called the ACLU report "unfounded and baseless."

The documents describe hundreds of cases of alleged abuse said to have occurred between 2009 and 2014, according to Mitra Ebadolahi, staff attorney with the ACLU's Border Litigation Project.

"These documents provide a glimpse into a federal immigration enforcement system marked by brutality and lawlessness," Ebadolahi said in a statement.

The allegations include reports of physical, verbal, sexual and psychological abuse of migrant children and the denial of clean drinking water and adequate food.

Among the allegations, U.S. officials are said to have:

Customs and Border Protection said the ACLU report "equates allegations with fact" and ignores reforms that have been made recently.

It said an investigation by the DHS Office of Inspector General (OIG) "found these claims unsubstantiated" and that OIG officials making a series of unannounced visits to CBP facilities "did not observe misconduct or inappropriate conduct by DHS employees."

Ebadolahi, however, said investigations into the allegations were "structurally inadequate."

"These agencies have taken no meaningful action to hold federal officials accountable for abusing children or to ensure that such abuse never occurs again," she said.

"These failures," it says, "have allowed a culture of impunity to flourish within CBP, subjecting immigrant children to conditions that are too often neglectful at best and sadistic at worst."