Accessibility links
NOAA Expects Hurricane Season For 2018 To Be Near Or Above Normal : The Two-Way After a devastating 2017 hurricane season, the Atlantic isn't likely to get a break this year, NOAA says. The agency predicts 10 to 16 named storms this season, including up to four major hurricanes. A car drives on a damaged road in the aftermath of Hurricane Maria in Humacao, Puerto Rico, on Oct. 2. Ricardo Arduengo/AFP/Getty Images hide caption 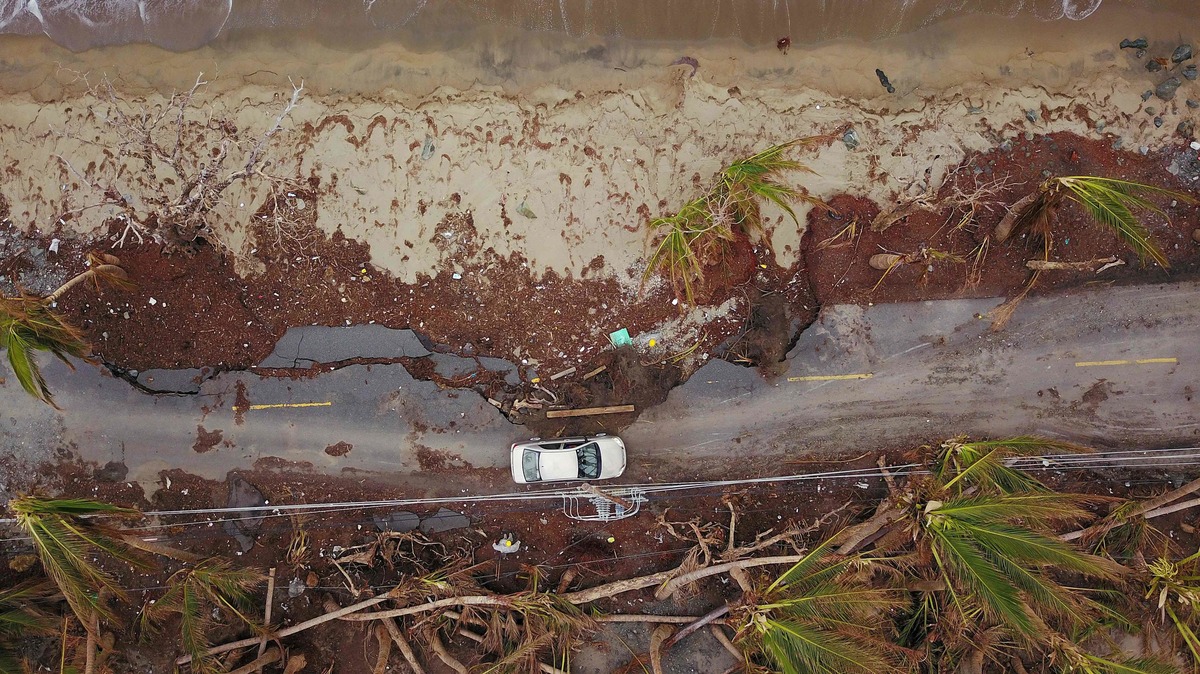 A car drives on a damaged road in the aftermath of Hurricane Maria in Humacao, Puerto Rico, on Oct. 2.

Up to four major hurricanes could form in the Atlantic this hurricane season, according to the annual forecast from NOAA's Climate Prediction Center.

The Atlantic hurricane season runs from June 1 to Nov. 30. Overall, the season will likely be normal or somewhat more intense than normal, the National Oceanic and Atmospheric Administration says, with a 25 percent chance that hurricane activity will be below normal.

Last year's hurricane season was one of the most active on record. NOAA is not expecting this season to be quite so bad, but an average season could do tremendous damage. That's especially true if a storm hits communities in Puerto Rico or along the Gulf Coast that are still struggling to recover from the devastation caused by Maria and Harvey last year.

The seasonal outlook can't predict landfall areas, but the forecasters warn that even an average season involves "quite a few hurricanes."

"We know certain areas have been compromised from last year's storm, and that makes hurricane preparedness ... even more important this year," says Gerry Bell, the lead hurricane season forecaster at the Climate Prediction Center.

JUST IN: Atlantic #HurricaneSeason Outlook 2018 -- 70% likelihood of 10-16 named storms of which 5-9 could become hurricanes, including 1-4 major #hurricanes https://t.co/yXpag4nQ2R pic.twitter.com/lgzoVaxDK4

Neil Jacobs, the assistant secretary of commerce for environmental prediction and observation, says that NOAA predicts between 10 and 16 named storms, with sustained winds of 39 mph or higher.

The agency expects five to nine hurricanes, which have winds of 74 mph or higher. One to four of those are expected to be major hurricanes — Category 3 or higher.

There's also a chance that a weak El Niño could develop late in the summer, which would weaken the very end of the hurricane season, but there's no guarantee of that, NOAA says.

NOAA and the Federal Emergency Management Agency recommend that members of the public make emergency and evacuation plans, and review their insurance coverage.

The actual season was right on the high end of that prediction range. There were 17 named storms, including 10 hurricanes.

NOAA slightly underestimated just how bad those hurricanes would be. It expected two to four major hurricanes; in fact, there were six major hurricanes, three of which made landfall as powerful storms.

Hurricane season hasn't officially started yet, but the storms are already brewing. NOAA's National Hurricane Center says there's "a high chance of a tropical or subtropical depression" forming in the Gulf of Mexico over Memorial Day weekend.

The names for Atlantic storms are defined by the World Meteorological Organization. There are six lists that rotate through the years, with names retired after particularly deadly storms. Here's this year's list: