Accessibility links
Danica Patrick's Indy 500 Crash Caps An Otherwise Groundbreaking Career : The Two-Way The 36-year-old returned on Sunday to the same track that skyrocketed her career. While her last race ended in a crash, she goes down as one of the most successful female racing drivers in history. 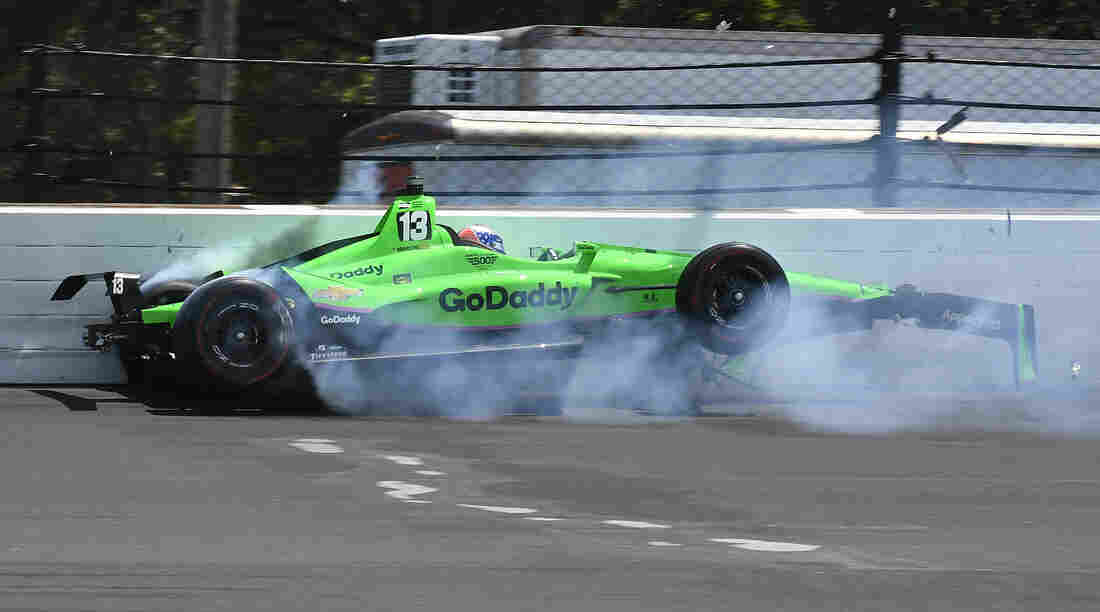 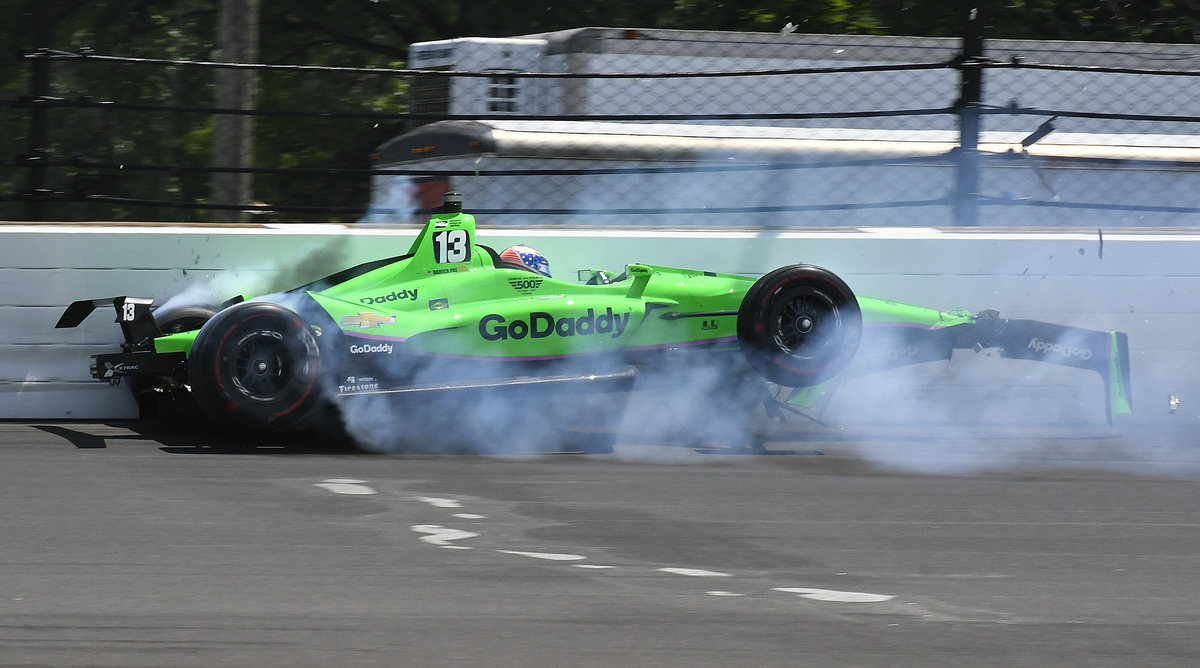 Danica Patrick hits the wall in the second turn, during Sunday's running of the Indianapolis 500 auto race at Indianapolis Motor Speedway in Indiana.

In the last race of her history-making career, Danica Patrick went out with a bang — but not the bang she'd hoped.

At the Indianapolis 500 on Sunday, Patrick crashed as she came out of Turn 2.

During lap 68 of the race, Patrick lost control and hit the outer wall before sliding across the track, hitting the interior wall and finally coming to a stop on the grass, the Associated Press reports.

Patrick is the only woman to have won an IndyCar race, after picking up the sport at age 10 as a way to spend time with family, especially her father, as NPR's Cheryl Corley reports.

The 36-year-old was able to lift herself out of the car and walk away from the crash. She was released in good shape after a medical evaluation.

"I mean, today was really disappointing for what we were hoping for and what you want from your last race, but I'm grateful for all of it," Patrick said. "I just wish I could have finished stronger."

But Patrick's finale doesn't define her more than decade-long racing career. Speaking with ESPN ahead of Sunday's race, Patrick said, "When I'm done racing I hope people remember me as a great driver. And I think it starts there."

Indy 500 Pioneer Janet Guthrie Savors The Day She Made History

It was Australian Will Power who won the race in its 102nd running, edging out Ed Carpenter. Sunday marks Power's first win in a race that saw seven crashes.

"Man, I just can't believe it," the 37-year-old exclaimed after his winning finish. "I was wondering if I would ever win it."

Patrick had those same thoughts as she returned to Indianapolis after her 2005 debut at the track that sparked her career. Ahead of Sunday's race, Patrick had a four-lap average of about 228 mph, earning her a top spot, starting in 7th at the beginning of the race.

Her appearance in Indianapolis was the second half of the "Danica Double" — a swan song of two final races to mark the end of her career.

Patrick finished 35th at the Daytona 500 in February after another crash ended her run in that race.

But 13 years ago, Patrick was named IndyCar's rookie of the year, had a record-breaking season and led for 19 laps in the Indy 500, as NPR's Corley reports. Throughout her career, Patrick made eight appearances in the Indianapolis 500 and finished in the top 10 during six of those. Overall, her only win in an IndyCar race came in 2008 in Japan.

Patrick left IndyCar and moved on to stock cars with NASCAR in 2012, but never won a race.

Before her start on Sunday, Patrick posted a photo to Instagram with the caption: "This is just a chapter in the book. Today feels heavy, but only because the chapter finishing has meant so much to me. Thank you for the memories. I am at a lack of words today."

This is just a chapter in the book. Today feels heavy, but only because the chapter finishing has meant so much to me. Thank you for the memories. I am at a lack of words today.

As she moves away from racing, Patrick has her Warrior clothing line, Somnium wine and her latest book Pretty Intense — a nutrition and fitness guide -- to fill her time previously spent racing.

And although Sunday marked the end of Patrick's dream of winning the Indy 500, she spoke fondly of her history on the track.

"It's an entire career, but what really launched it was this, so it's both of them," she told ESPN. "I've had a lot of good fortune here and did still have some this month, it just didn't come on race day. But we had some good moments."