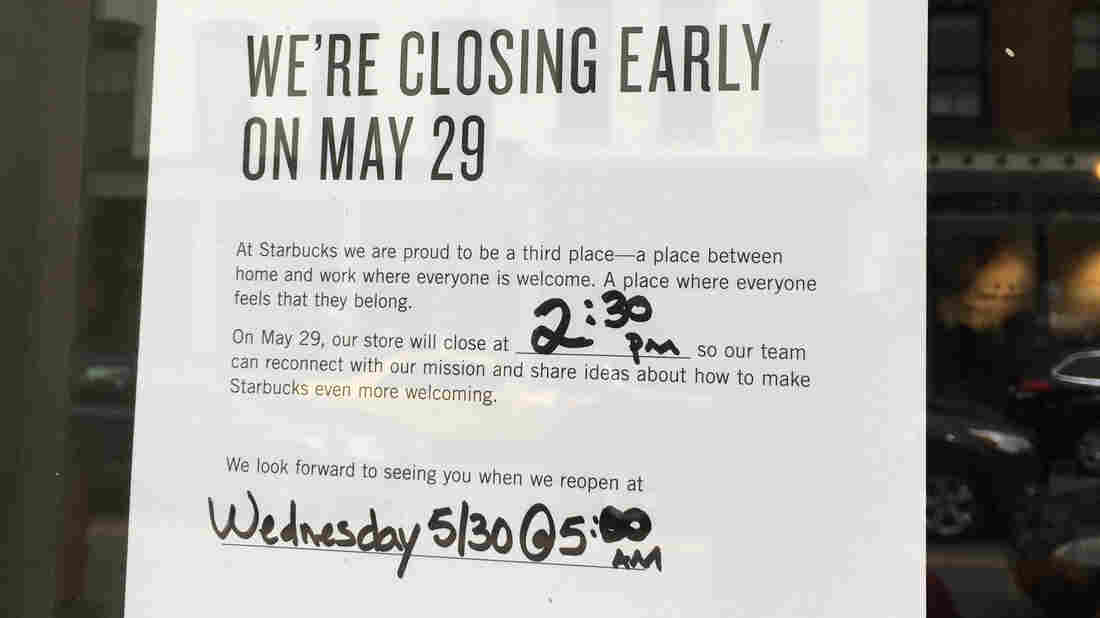 Starbucks is shutting down thousands of its coffee shops Tuesday afternoon to host racial bias training for its employees. A sign at one of the company's cafes in Portland, Maine, informs customers that it will shut its doors at 2:30 p.m. ET. Scott Mayerowitz/AP hide caption 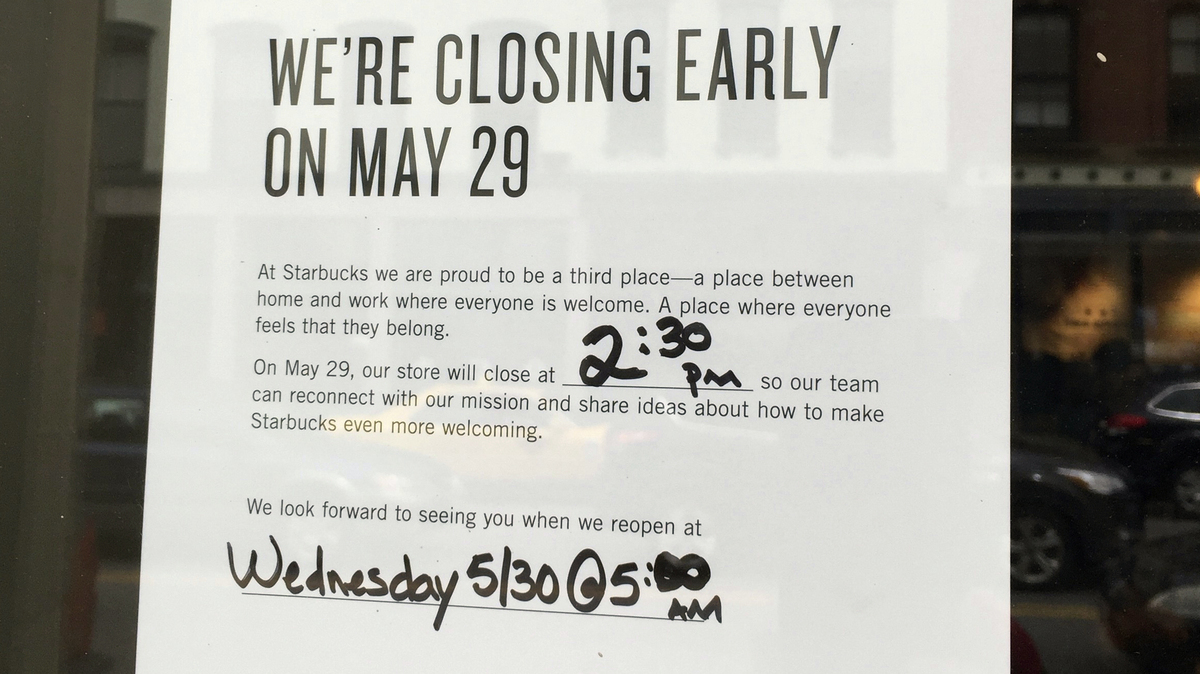 Starbucks is shutting down thousands of its coffee shops Tuesday afternoon to host racial bias training for its employees. A sign at one of the company's cafes in Portland, Maine, informs customers that it will shut its doors at 2:30 p.m. ET.

A simultaneous training session for 175,000 employees, across more than 8,000 stores — that's what Starbucks is doing Tuesday, urging its workers and managers to discuss racial bias and respect following the arrest of two black men at a Philadelphia store last month.

For the sessions, many Starbucks stores will shut down in the afternoon and stay closed for several hours. A sign at one location in Chicago, for instance, says the store will be locking its doors at 2:30 p.m. and reopening on Wednesday. Other stores have posted similar notices.

The plan covers only Starbucks-operated stores; nearly all of the 7,000 Starbucks-licensed coffee shops — in places like supermarkets, hotels and airports — are likely to remain open, the company says.

Starbucks says the afternoon training session is not mandatory — but that employees are "invited and encouraged" to attend. A company representative added that Starbucks will also use the materials in its regular training, including for new hires.

The training is meant to help Starbucks navigate the challenges of being the "third place" that its leaders have often spoken about — the place where people spend time outside of work and their home. That mission came under new scrutiny in April, when two men who had been refused access to the bathroom at a Philadelphia store refused to leave. After the manager called 911, the men were arrested and held for hours.

Starbucks apologized for the incident, which sparked protests, online outrage and calls for both clarifications of the chain's policies and for new training for its employees.

Early this month, the men who were arrested, Donte Robinson and Rashon Nelson, both 23, reached a settlement with Starbucks for an undisclosed sum — and an offer to participate in an employee college tuition program that offers bachelor's degrees online. The pair also reached a separate deal with Philadelphia, for $1 each and the promise of a public high school program for young entrepreneurs.

Starbucks: No Purchase Needed To Use The Restroom

On May 10, Howard Schultz, Starbucks' executive chairman and former CEO, said the company had adopted a new restroom policy: "We don't want to become a public bathroom, but we're going to make the right decision 100 percent of the time and give people the key."

As for what Tuesday's training will look like, Starbucks has released a general outline of the curriculum, which it says was shaped by a number of people, from Equal Justice Initiative founder and Executive Director Bryan Stevenson and NAACP Legal Defense and Educational Fund President Sherrilyn Ifill to researchers and Starbucks employees.

Last month, Ifill spoke to NPR about her reaction to videos that showed the arrests at the Philadelphia store:

"Well, I think like many people, it produced that same very familiar sinking feeling and anger, you know, first that the police were called for what was clearly a matter that did not require law enforcement, and then that these men were arrested by the police in that Starbucks. And, you know, it's part of a very, very long story about African-Americans and public accommodations and how we are treated in public spaces. And in this — and retail establishments. And I think, unfortunately, that video for many of us was too familiar."

As for her role in the training, Ifill said her goal was to ensure "that what they do undertake is rigorous and is likely to produce real results."

In the training, Starbucks' employees will use a "Team Guidebook" to follow a sequence of videos, including one that features the hip-hop artist Common discussing what he says is a life skill: how to make other people feel welcome.

Starbucks Training Focuses On The Evolving Study Of Unconscious Bias

"I know that for me, welcoming people in my life starts first with sharing who I am," Common says in the video, according to a transcript.

That segment is followed by a five-minute session in which workers pair off and discuss the question, "What makes me, me? And you, you?"

The training session also features a film by Stanley Nelson, director of the documentary Freedom Riders.

Starbucks says it will also share the training materials with licensed business partners, to give their employees the option of taking part at a later time.

Starbucks' video about the training closes with the message, "It won't be perfect, but we're all in this together."