Accessibility links
Pompeo Meets With Top North Korean Official In Hopes Of Reviving Singapore Summit : The Two-Way The secretary of state and Kim Yong Chol met for the second day on Thursday, seeking to salvage a June 12 summit between President Trump and Kim Jong Un. 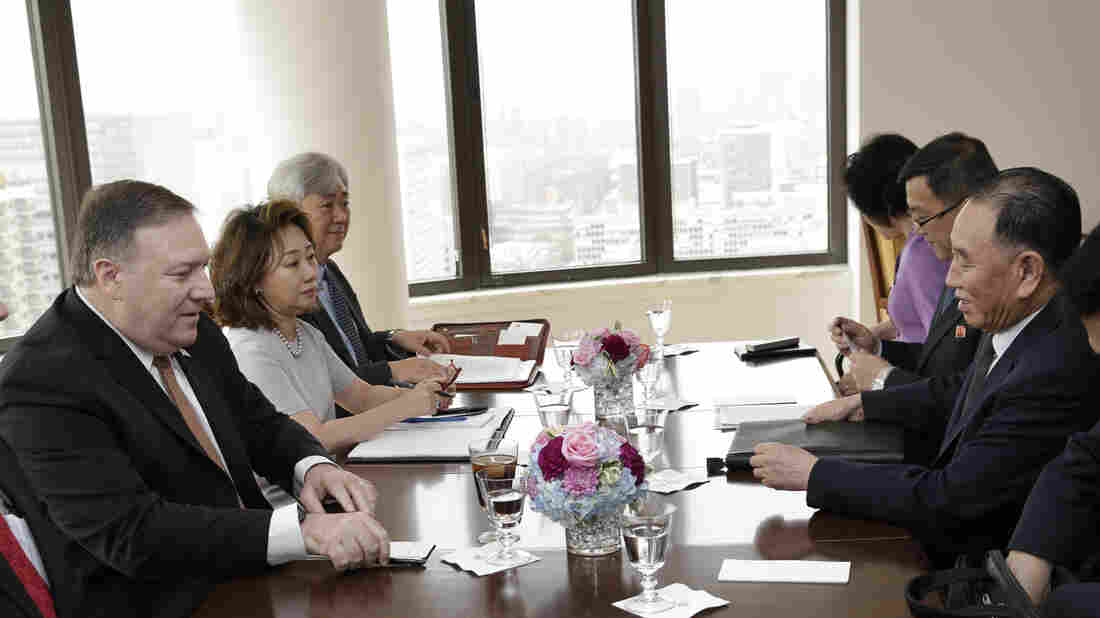 Kim Yong Chol, former North Korean military intelligence chief and one of Kim Jong Un's closest aides (second from right) and U.S. Secretary of State Mike Pompeo sit across from one another before the start of a meeting on Thursday in New York Seth Wenig/AP hide caption 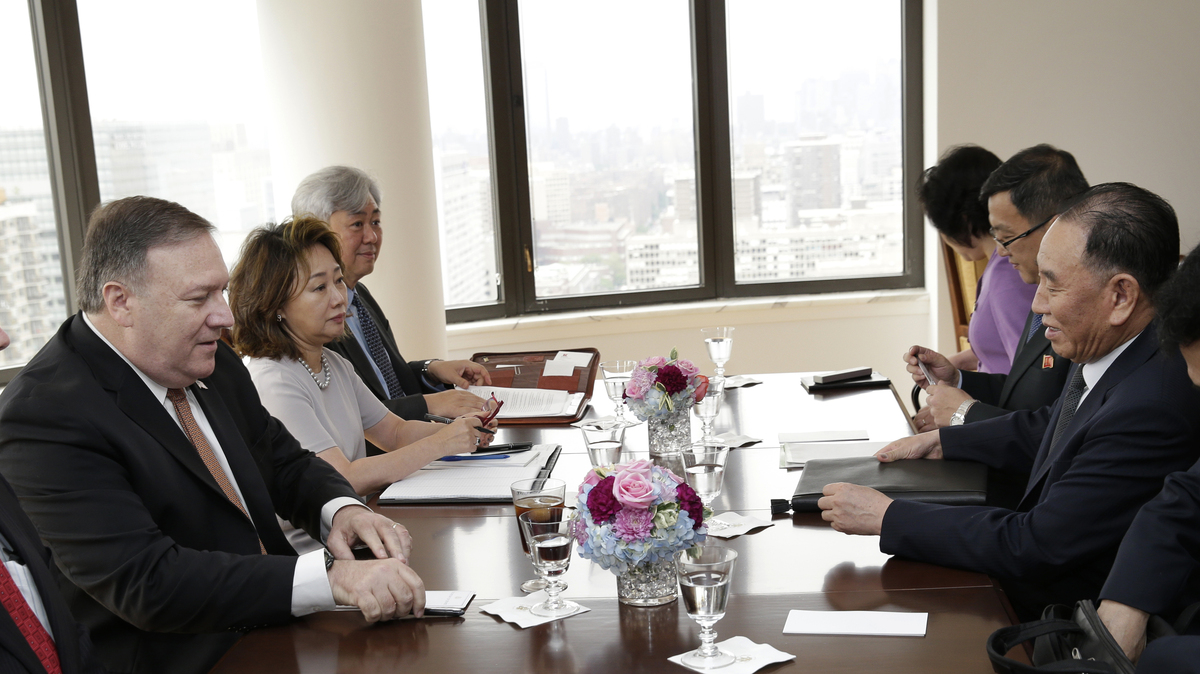 Kim Yong Chol, former North Korean military intelligence chief and one of Kim Jong Un's closest aides (second from right) and U.S. Secretary of State Mike Pompeo sit across from one another before the start of a meeting on Thursday in New York

Secretary of State Mike Pompeo is meeting with a top North Korean official for the second day on Thursday, resuming talks that began over dinner in New York as the two seek to salvage a June 12 summit between President Trump and Kim Jong Un.

The summit, planned since April, was called off just a week ago by Trump amid a renewed round of heated rhetoric from Pyongyang and concerns over whether North Korea was sincere about "denuclearization." Within days of canceling the summit, however, there was talk of getting it back on track.

The meeting between Pompeo and Kim Yong Chol, North Korea's former military intelligence chief, marks the highest-level official visit by a North Korean to the U.S. since 2000.

Pompeo and Kim resumed their work shortly after 9 a.m. ET, sitting down at a table in a high-rise apartment that offers a sweeping view of downtown Manhattan, the East river, and the U.N. headquarters, according to a pool report.

Last night, members of the delegations ate steak and drank whiskey; today, they're having chocolate croissants and cinnamon rolls, the pool report adds.

Today's sessions are expected to last until 1:30 p.m. ET.

As Pompeo met with Kim in New York, his Russian counterpart, Sergey Lavrov, met with North Korean leader Kim Jong Un in Pyongyang on Thursday, in a sign that Russia intends to exert its influence in talks on the Korean Peninsula's future. Lavrov extended greetings from Russian President Vladimir Putin and invited the ruler to visit Moscow.

As we reported previously, Kim Yong Chol "is a veteran of diplomacy with South Korea who is considered to be Kim Jong Un's right-hand man. ... Kim is also widely believed to be behind the 2010 sinking of the Cheonan, a South Korean naval vessel, in which 46 seamen died."

Despite the meetings in New York, there is still no certainty on whether the summit will take place — either on its planned date next month, or at all.

As Pompeo and Kim were meeting in New York, so were lower-level U.S. and North Korean diplomats — both in Singapore, the planned venue for the historic summit, and at the Koreas border.

In recent months, Pyongyang has toned down its normally bombastic tone aimed at the U.S. and South Korea. In a rare meeting in April, North Korean leader Kim Jong Un and South Korean President Moon Jae-in shook hands at the heavily fortified border in a gesture of goodwill that seemed to presage a broader rapprochement.

That was followed up by a secret visit by Pompeo to North Korea before the former CIA director had even been confirmed in his new job as secretary of state.

However, Pyongyang quickly asserted that its pledge to "denuclearize"
did not mean a unilateral surrender of its nuclear weapons program.

Pyongyang was also angered by remarks made by newly installed national security adviser John Bolton, who said in a television interview that denuclearization in North Korea might follow the same path as in Libya – implying the possibility of violent regime change.

Later, in an apparent effort at damage control, Vice President Pence seemed to only make matters worse, suggesting that sitting down for talks was the only way Kim Jong Un could escape such a fate.