Accessibility links
One More To Go: Illinois Ratifies Equal Rights Amendment : The Two-Way The passage comes 36 years after the ratification deadline set by Congress. Some say the votes are merely symbolic — but the ERA's backers disagree. 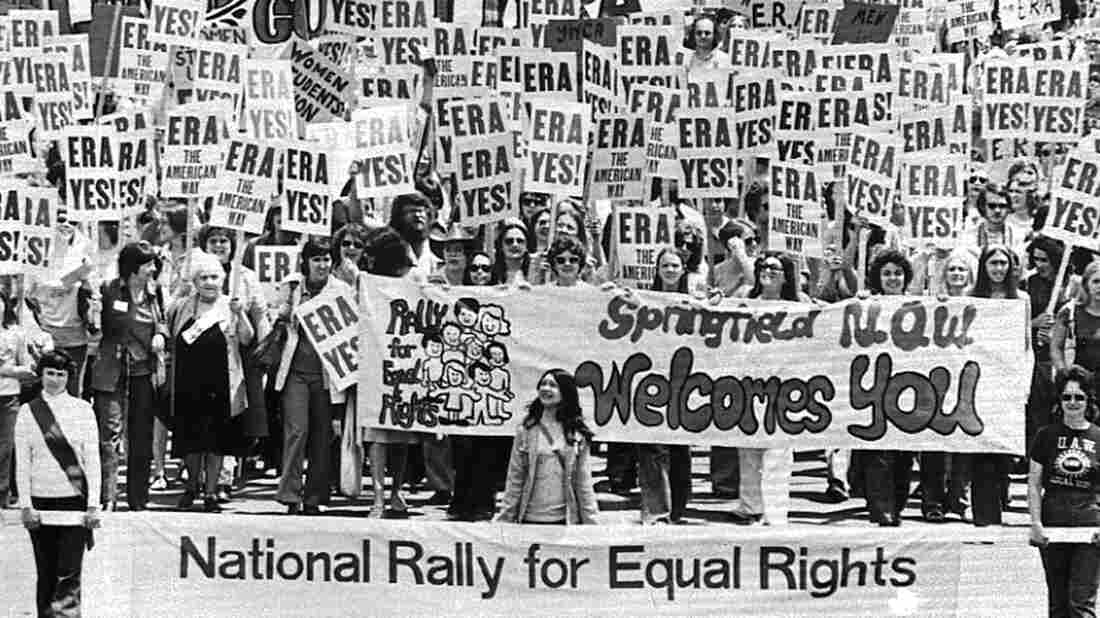 Illinois has ratified the Equal Rights Amendment, more than 40 years after an estimated 10,000 people marched on the Capitol building in Springfield, Ill., to urge approval. AP hide caption 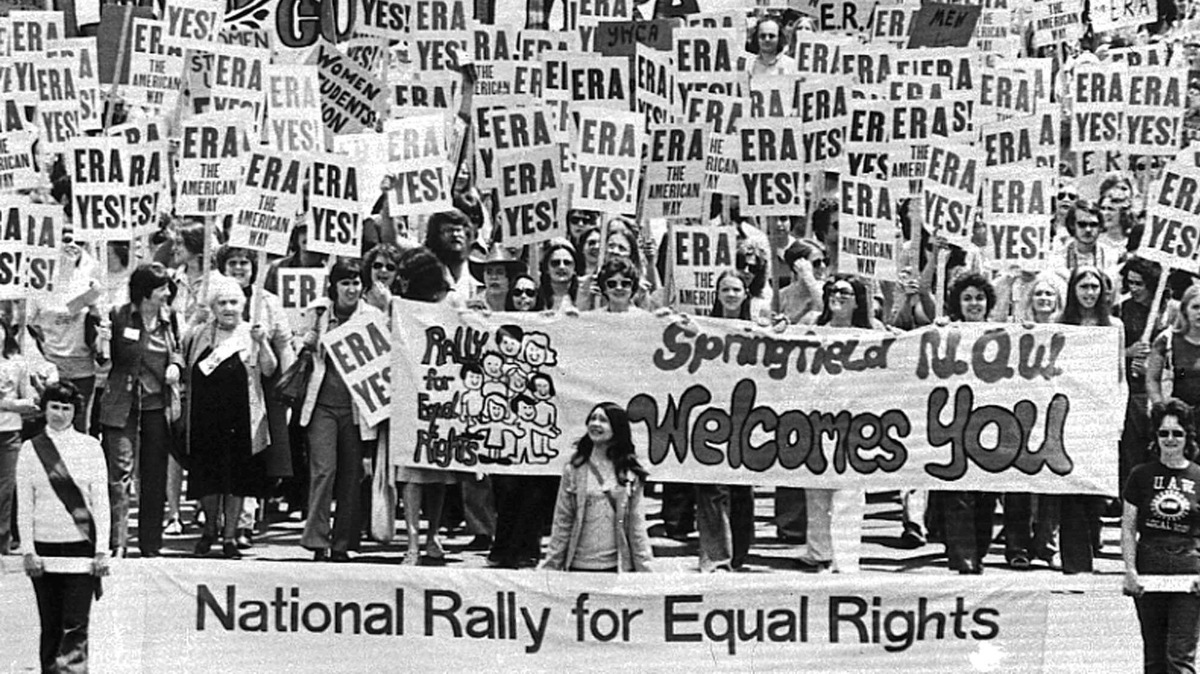 Illinois has ratified the Equal Rights Amendment, more than 40 years after an estimated 10,000 people marched on the Capitol building in Springfield, Ill., to urge approval.

Illinois lawmakers have voted to ratify the Equal Rights Amendment, affirming equal rights for women and putting the legislation just one state away from potentially being adopted by the U.S. Constitution. The passage comes 36 years after the original deadline for ratification set by Congress.

Opponents of the amendment said that voting on it now was merely a symbolic gesture; some also said the protections it outlined in 1972 already apply to women today. But supporters said it's important — now more than ever — for the government to state clearly that women and men have equal rights under the law.

The Illinois House approved the ERA on Wednesday night, just before the end of the chamber's regular session. There were hugs and high-fives as Democratic legislators, including a number of female lawmakers, stood, cheered and hugged as the result was announced.

"It was close," reports Rachel Otwell of NPR Illinois. "Members booed as it appeared it might have fallen short. But then, two more legislators voted affirmatively. It passed with a single vote to spare."

After the vote, Illinois state Rep. Juliana Stratton, who had spoken during the debate about discrimination she has faced as a black woman, tweeted, "I'm so proud to take this historic vote to pass the ERA in Illinois! This is the moment it happened!"

"Look at all this love," a lawmaker can be heard saying in a video from the House floor that was posted by state Rep. Litesa Wallace. "We just made some history."

The Illinois Senate voted to ratify the ERA in April.

In the 1970s, the ERA failed to become part of the Constitution, falling just three states short of ratification — a result that stood despite extending the original 1979 deadline to 1982.

Wednesday's approval was a stark turnabout for Illinois, the state from which conservative activist Phyllis Schlafly, the founder of the Eagle Forum, had mounted her fierce opposition to the ERA in the 1970s. When the original 1979 deadline neared with no passage in sight, Schlafly threw an anti-Equal Rights Amendment dinner in Washington, with U.S. Sens. Jesse Helms, R-N.C., and Orrin Hatch, R-Utah, as honored guests.

Despite the lapse in deadline for ratification, the ERA's supporters say Congress can revive the amendment.

Rep. Currie is one of a handful of legislators who was serving when the ERA was first an issue in Illinois. She’s retiring at the end of this term. pic.twitter.com/i0cpnYIAqW

"The ACLU has long supported the ERA and the effort to explicitly guarantee all women equal rights under the Constitution," Lenora Lapidus, director of the ACLU Women's Rights Project, said in a statement to NPR. "Years in the making, yesterday's vote in Illinois brings us one step closer. We look forward to more progress being made, and ensuring that women are explicitly protected against discrimination, [regardless of race, sexual orientation or socioeconomic background]."

Until last year, no U.S. state had voted to ratify the amendment in 40 years. But that changed when Nevada ratified the ERA in March 2017.

"Virginia could — and should — put the Equal Rights Amendment over the top," Rep. Don Beyer, D-Va., said in a tweet on Thursday.

But the federal amendment failed anew in Virginia's Legislature earlier this year, to chants of "Shame!" from backers who had come to the state Capitol in Richmond to push for ratification.

"The #MeToo movement has underscored the importance of strong legal protections for women's rights, and our resolve to secure these Constitutional guarantees is unwavering," National Organization for Women President Toni Van Pelt said in a statement to NPR.

Van Pelt added, "There's still more to be done to correct this shameful failure of our Constitution."

The decades-long delay in ratification isn't the first slowdown for the ERA, which Congress approved in March 1972 — some 49 years after it was first introduced.

The constitutional amendment was initially put forth by Alice Paul, an economist and organizer who helped found the National Woman's Party — and who marched for the ratification of the 19th Amendment granting women the right to vote in 1920. Paul worked with another prominent suffragist, Crystal Eastman, on the ERA language.

"Alice Paul actually drafted the original Equal Rights Amendment and its updated text later in the '40s," Jennifer Krafchik, acting executive director of the Belmont-Paul National Monument, told NPR in 2016. "So she spent her entire life, really, working for women's rights, women's equality. She worked for equal pay. She worked for the right for women to serve on juries."

Paul died in 1977, having seen the ERA adopted by Congress — but not ratified by the states.