Accessibility links
'I Chose To Stay Alive,' Says Russian Journalist Who Faked His Death : The Two-Way Arkady Babchenko, fearing for his life, cooperated with Ukrainian authorities to stage his death and capture his would-be killer. Now come the ethical questions.

'I Chose To Stay Alive,' Says Russian Journalist Who Faked His Death

'I Chose To Stay Alive,' Says Russian Journalist Who Faked His Death 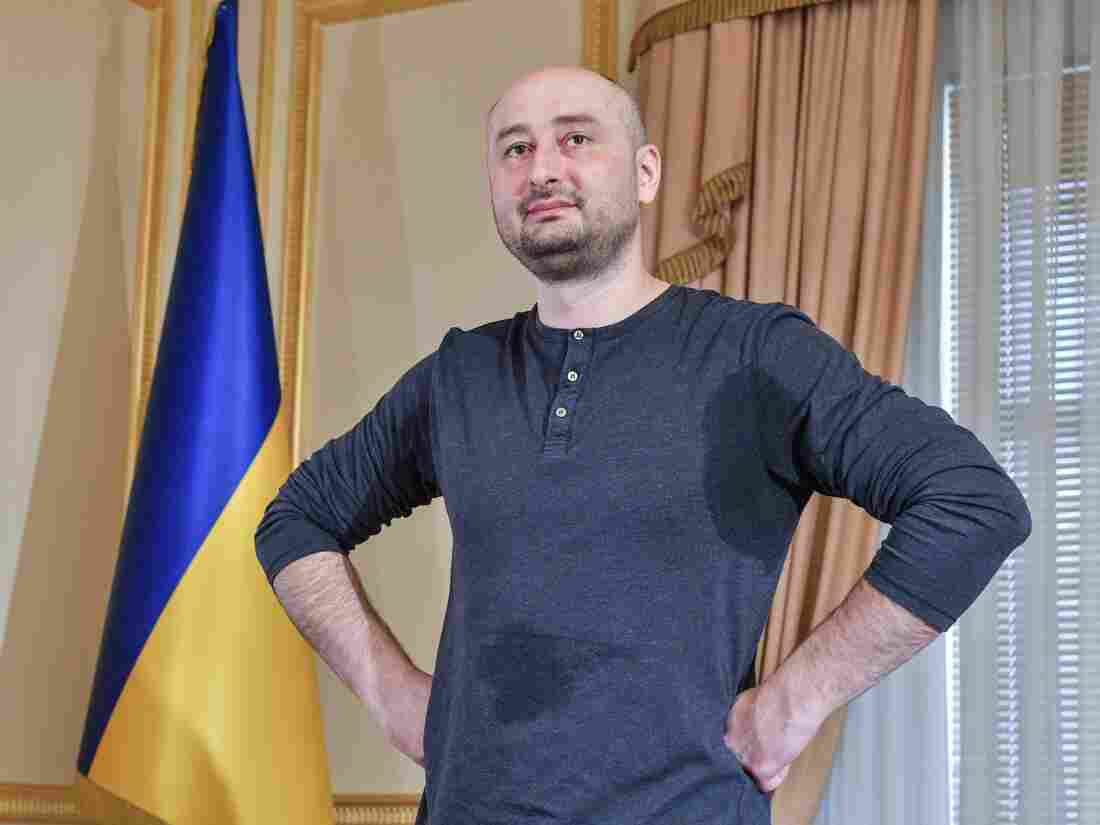 At a news conference on Thursday in Kiev, Arkady Babchenko answered critics of his staged death. Authorities had announced that he had been fatally shot at his home on Tuesday. Genya Savilov/AFP/Getty Images hide caption 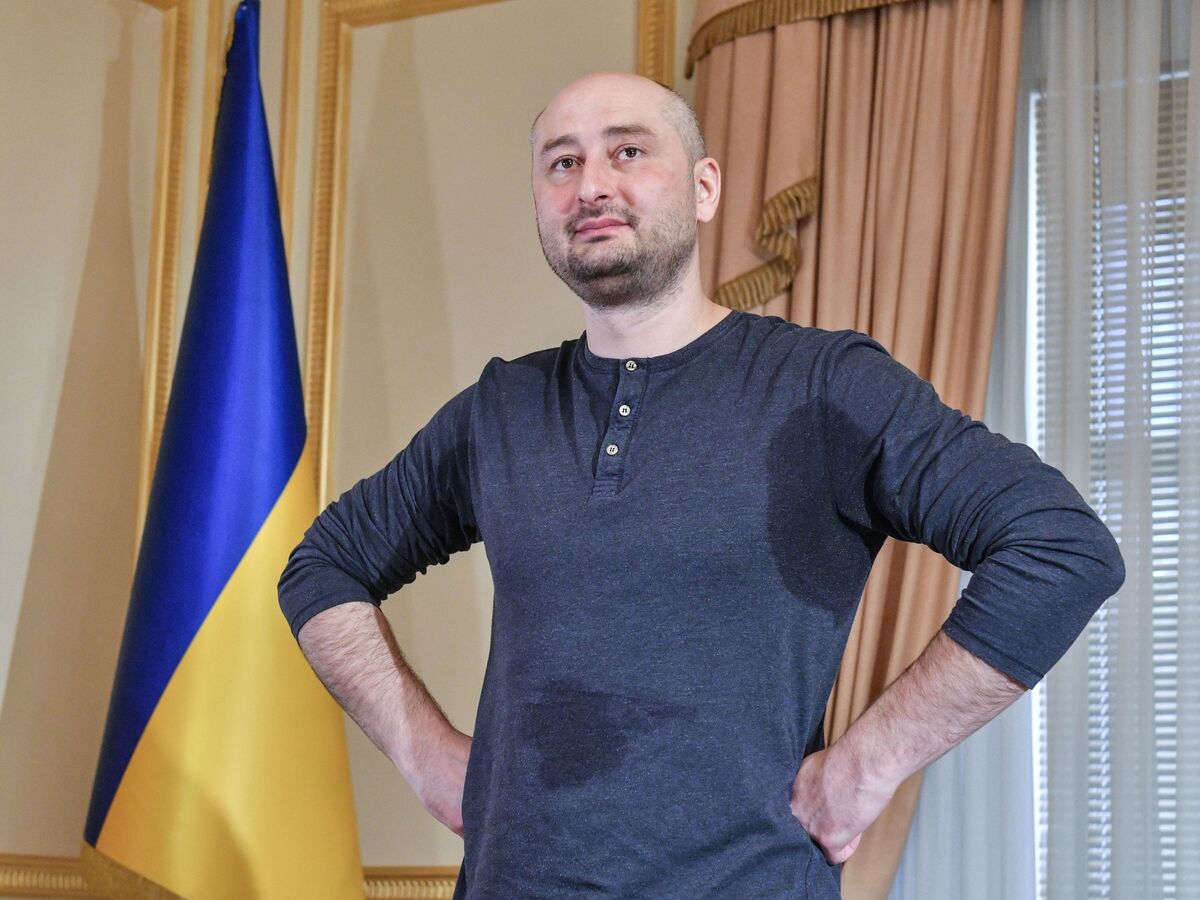 At a news conference on Thursday in Kiev, Arkady Babchenko answered critics of his staged death. Authorities had announced that he had been fatally shot at his home on Tuesday.

Two days after staging his death with the help of Ukrainian authorities, Russian journalist Arkady Babchenko is explaining how the plot unfolded and why he went along with it.

He was reported to have been fatally shot at his apartment in Kiev on Tuesday but reappeared at a news conference Wednesday. A month earlier, Ukrainian authorities had informed him that there was a hit out on him, he said, showing him documents and photographs that could only have come from Russian federal agencies. The journalist had fled Russia in 2017 after a writing an "unpatriotic" Facebook post that triggered harassment and threats.

At a news conference on Thursday, Babchenko described how he rehearsed falling and what it felt like to lie on the floor, soaked in pig's blood, before an ambulance rushed him off. The ordeal started at 6 p.m., and by 10 p.m., he had arrived, cold and wet, at the morgue.

As journalists and human rights groups lamented his apparent death, he sat wrapped in a sheet, watching "the news about what an amazing guy I was."

His unexpected return was initially met with gasps and cheers. He wrote on Facebook that he promised to die at age 96 and dance on Russian President Vladimir Putin's grave.

But now fellow journalists and human rights organizations have expressed something beyond relief that he is still among the living. Some believe that his actions raise ethical questions.

"I still think it was a very bad idea for a journalist to take part in this operation," Russian investigative journalist Andrei Soldatov told NPR. He had opted to go an event honoring Babchenko instead of attending an award ceremony. "Babchenko is a journalist, not a policeman, and part of our job is trust. He undermined even further the credibility of journalists."

Babchenko's friend and colleague Simon Ostrovsky, an investigations editor at the news site Coda Story, told NPR, "Why was it necessary to say that he was dead in order to capture the people who they say were trying to kill him? Here we were, spending most of yesterday posting about his death like it happened, only, all of us, to discover that it'd been mistaken. And at a time when people's trust in the media is so low. ... This was sort of a blow."

Christophe Deloire, secretary general of Reporters Without Borders‏, took a critical stance toward the Ukrainian government on Twitter. "RSF expresses its deepest indignation after discovering the manipulation of the Ukrainian secret services, this new step of a war of information. It is always very dangerous for a government to play with the facts, especially using journalists for their fake stories," he tweeted.

"Why did the Ukrainian authorities publicly blame the Russian security services for the alleged assassination plot of #ArkadyBabchenko prior to completing an investigation and charging the suspected plotters?" the Committee to Protect Journalists tweeted, after expressing gratitude that Babchenko was safe.

In response to criticism, the Ukrainian Embassy in London released a statement Wednesday. "No other way to uncover the Russian-schemed attempt at Mr Babchenko's life had existed than a special operation conducted in full secrecy."

It added that the perpetrator of the assassination attempt had been detained and its organizers "discovered." "We count on understanding by Ukraine's international partners and support for our country as it resists Russia's hybrid acts."

Authorities also released a video that they said showed a financial transaction between Babchenko's alleged would-be assassin and the organizer.

Arsen Avakov, Ukraine's interior minister, told The Guardian that he was surprised and confused by the response of international organizations "that we 'misled society.' Did you really want Babchenko to have been killed?" He said Ukrainian security services and law enforcement agencies would not "be guided by public opinion."

Other officials think it made for great propaganda. Russian Foreign Ministry spokeswoman Maria Zakharova noted, "It's of course great news that Babchenko is alive. The shame is that this masquerade hasn't worked out in other cases."

At the press conference, Babchenko said he wasn't thinking about journalistic codes of ethics when he decided to cooperate with Ukrainian security. He was thinking about his safety and the safety of his family.