Accessibility links
Digital License Plates Roll Out In California : The Two-Way New digital license plates operate like a Kindle on the back of your car. They can show personalized messages, but also ads. Privacy advocates worry about the implications of their tracking ability. 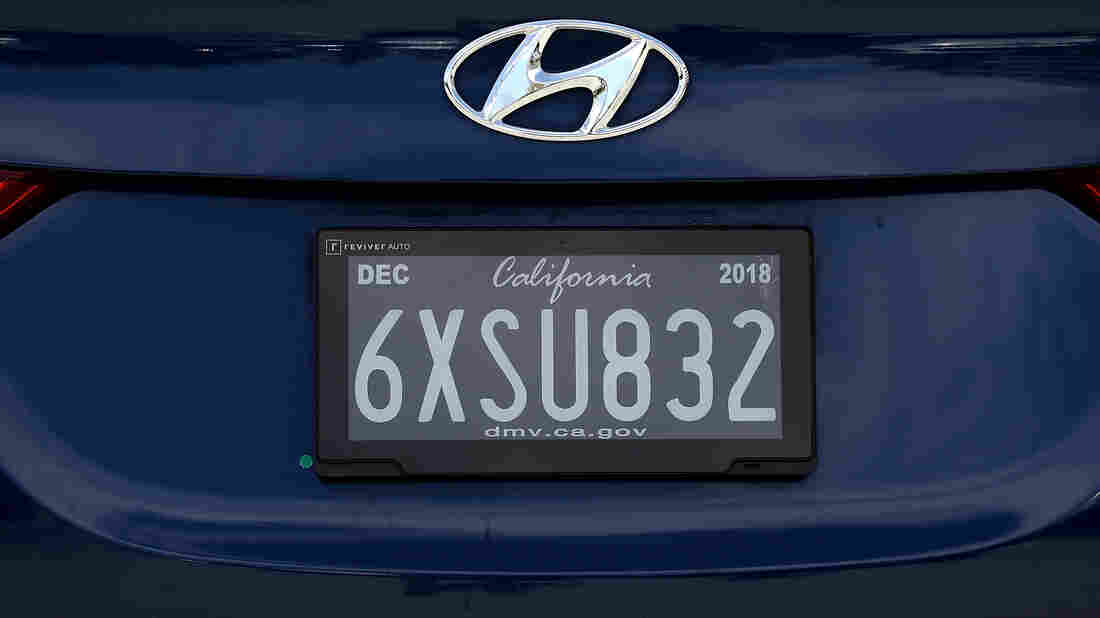 A digital license plate made by Bay Area company Reviver Auto is displayed at the company's headquarters on May 30 in Foster City, Calif. The plates have the ability to track cars and play ads. Justin Sullivan/Getty Images hide caption 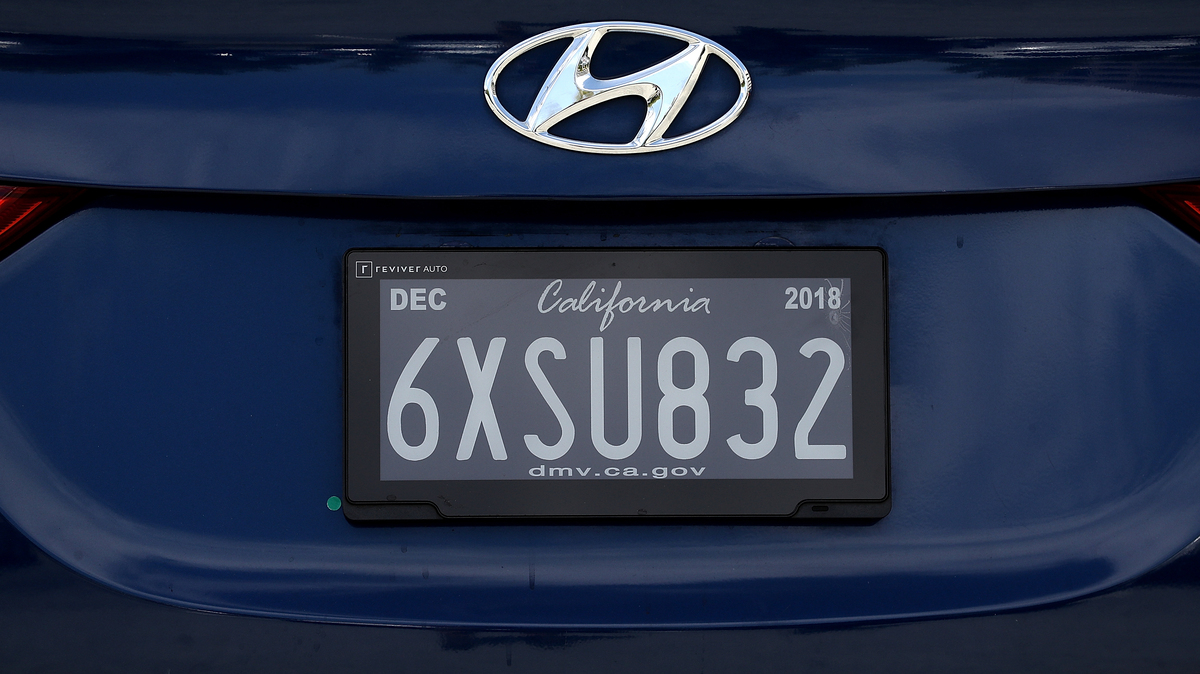 A digital license plate made by Bay Area company Reviver Auto is displayed at the company's headquarters on May 30 in Foster City, Calif. The plates have the ability to track cars and play ads.

The digital plates use the same technology behind Amazon's Kindle e-book reader to display large letters and numbers, as any other license plate would. But the devices are also able to show ads and personal messages and send data about their locations.

Sacramento is the first city to agree to test the technology. The city government received a shipment of 24 electric Chevrolet Bolts last week featuring the new plates, according to The Sacramento Bee.

The plates are going on sale at dealerships in California and "in pilot" in Arizona this month. The website of Reviver Auto, the company behind the plates, features a map of where the devices are available; it currently shows car dealers in the San Francisco Bay Area, Sacramento and around Los Angeles.

You won't be able to buy them at the DMV. The Verge notes that California requires both front and rear plates, and the digital plates are allowed on the car's rear side only for now.

Reviver Auto says it plans to introduce its digital plates in Florida and Texas this year as well.

According to the San Francisco Chronicle, what the company calls Rplates are also able to pay tolls automatically, track stolen cars and enable electronic vehicle registration — no more stickers necessary.

The plates can also track mileage and are able to set geofence notifications, Reviver Auto says. For instance, if a car goes beyond a certain assigned area, it could potentially notify managers.

"We know how far they travel and how much electricity they use," Mark Stevens, who manages Sacramento's fleet of cars, told the paper, saying the data help with maintenance.

Sacramento also may use the plates on the city vehicles for public service messages like Amber alerts, street closures or emergency alerts, the Bee reports.

They'll cost $699 for individual consumers, plus installation, as well as a monthly fee of about $7.

The tracking ability and the concentration of data make privacy advocates nervous.

Stephanie Lacambra of the technology privacy advocacy group the Electronic Frontier Foundation told the Chronicle that someone's location data "has the potential to reveal a lot more than ... where you happen to be at a particular moment in time." She added, "It's still not clear where all this information is going, how long it's stored or who has access to it."

Reviver Auto says the company never shares data "with the DMV, law enforcement, or any other third party," and says users can turn off location data at any time. The company also says it has the same security standards that banks use in their online services to protect from hacking.

Regarding safety concerns, Reviver Auto CEO Neville Boston said to NBC News, "It wouldn't be flashing or beeping," adding that, "the plan is to display emergency messages long enough for other motorists to see the messages without causing a dangerous distraction."

The digital plate program originated with California's Gov. Jerry Brown signing legislation in 2013 that enabled the state's Department of Motor Vehicles to look at "alternatives to stickers, tabs, license plates, and registration cards." The pilot program was later extended. It limits the program to 0.5 percent of registered vehicles in California — about 177,000, based on the DMV's 2017 statistics showing more than 35 million vehicles registered in the state.

Reviver Auto was the only company to bid on the program.

As of last week, only 116 vehicles with digital plates were in use in California, DMV officials told the Bee. Reviver Auto expects some of its sales to be to businesses with fleets of cars.

The California DMV must report the results of the digital plate pilot program to the state Legislature by July 2020.