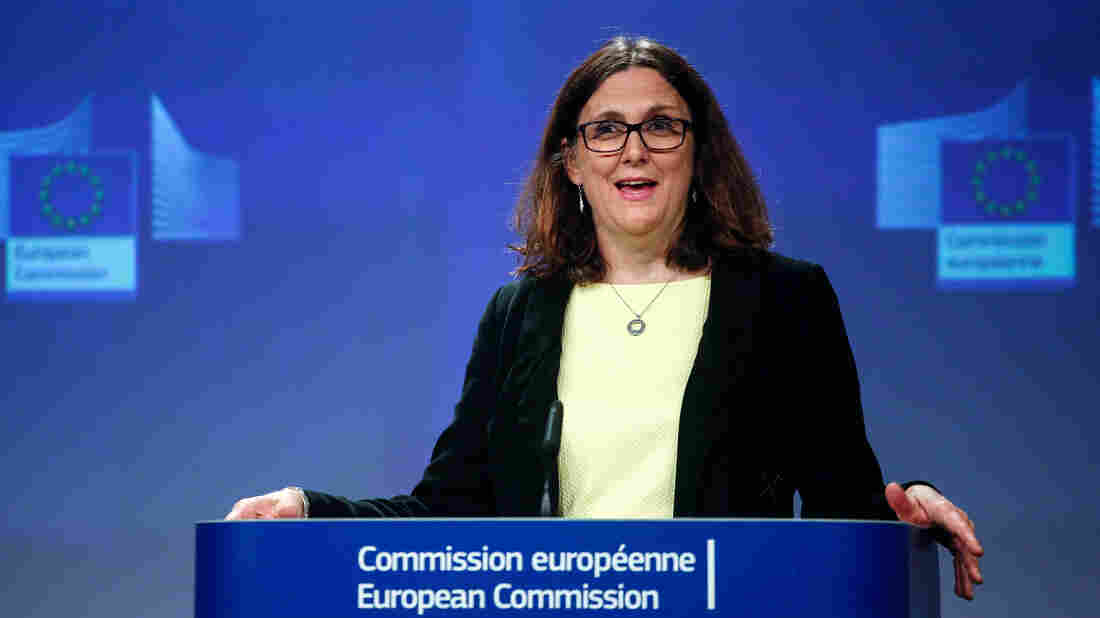 The EU will take its complaint over new U.S. tariffs to the World Trade Organization, according to Cecilia Malmström, the European commissioner for trade. Malmström spoke at a news conference Friday in Brussels. Dario Pignatelli/Bloomberg via Getty Images hide caption 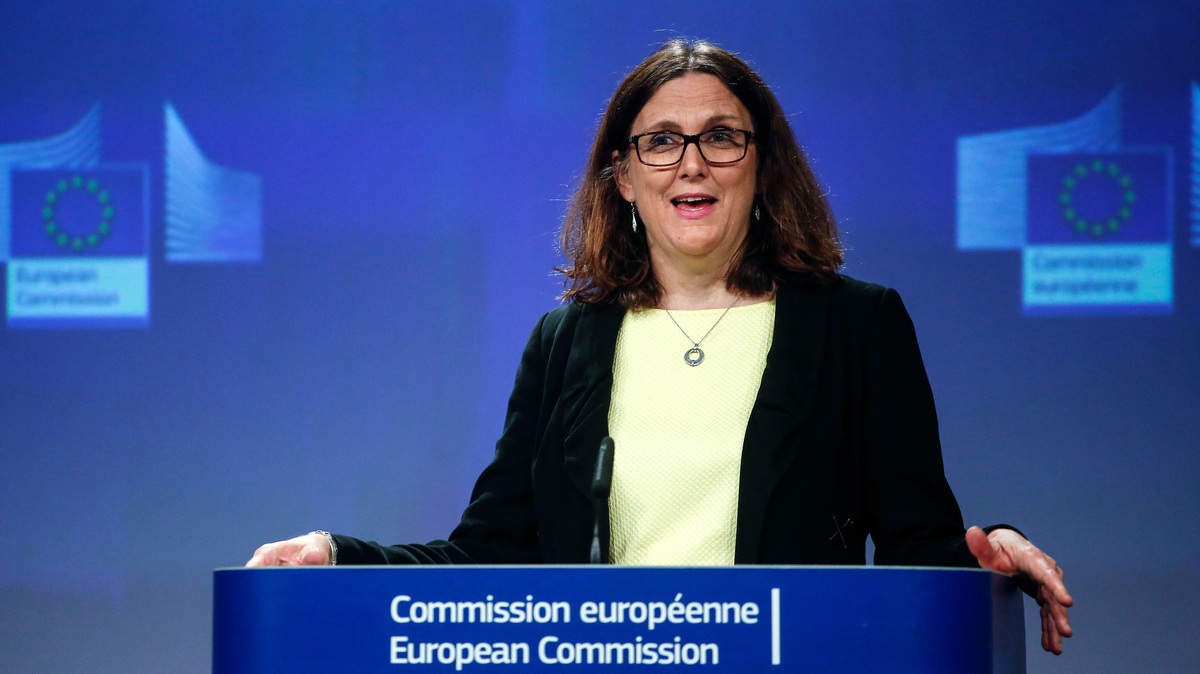 The EU will take its complaint over new U.S. tariffs to the World Trade Organization, according to Cecilia Malmström, the European commissioner for trade. Malmström spoke at a news conference Friday in Brussels.

After U.S. tariffs on imports of European steel and aluminum took effect Friday morning, the EU's top trade commissioner called them "illegal" and a classic case of protectionism.

The EU plans to make its case to the World Trade Organization.

"We will now trigger a dispute settlement case at the WTO, since the U.S. measures on steel and aluminum clearly go against agreed international rules," Cecilia Malmström, Europe's top trade commissioner, said at a news conference on Friday, shortly after the U.S. tariffs — 25 percent on steel and 10 percent on aluminum — took effect.

"We will now trigger a dispute settlement case at the WTO, since the US measures
on steel and aluminium clearly go against agreed international rules" @MalmstromEU #EUTrade https://t.co/P7xb6seTxj

The EU will now look at "rebalancing measures," she said, using a term that can variously be interpreted as neutralizing or retaliating against the U.S. move with European tariffs.

"We are not seeking to escalate any situation," Malmström said, "but not responding would be the same as accepting these tariffs, which we consider are illegal."

Her words echoed what French President Emmanuel Macron reportedly said in a phone call to President Trump on Thursday: The tariffs are "illegal," and Europe will respond in a "firm and proportionate manner," according to France 24.

In addition to the EU, Canada and Mexico — other U.S. allies and trade partners targeted by the new tariffs — have said they will retaliate and seek remedies through both the WTO and the North American Free Trade Agreement.

American tariffs on Canadian aluminum & steel are unacceptable. As we have said, we will always stand up for our workers, and today we’re announcing retaliatory measures to this attack on our industry.

Malmström also sharply criticized the Trump administration's claim that the tariffs levied on Canada, Mexico and the European Union were justified by national security concerns, saying the reason cited by the U.S. "is not relevant ... it is pure protectionism."

"European steel and aluminum exports to the United States cannot be seen as a threat to their internal security."

"This is very unfortunate," Malmström said, adding that the tariffs would hurt jobs in both Europe and the U.S. She said the EU isn't the cause of the problems identified by the U.S., adding that China is chiefly to blame.

In multiple rounds of talks, the U.S. demanded the EU put voluntary controls or quotas on its exports — ideas that were rejected, Malmström noted. "This is not the way the European Union is negotiating," she said.

The trade commissioner later added that the EU is also filing a separate WTO case against China over its intellectual property laws, in addition to working with the U.S. and Japan on strategies to cope with China's trade policies. It was an attempt, she said, to get at the "root causes" of concerns in both America and Europe.

As repeated rounds of talks failed to produce a compromise, European frustration with the U.S. stance has been evident — and growing. Malmström said that the U.S. had been holding a gun to the EU by threatening tariffs and that negotiations between friends weren't possible under those circumstances.

"That door, for the moment, is closed," she said.

On the subject of cars — Trump has threatened to put new taxes on European vehicles — Malmström said she and other officials are watching with "a lot of anxiety." She added, "If they were to be imposed, that would create enormous damage not only to the European economy — also to the U.S."

Discussing the U.S. tariffs on Friday, EU Commission President Jean-Claude Juncker said, according to Deutsche Welle, that Malmström "had 15, 16 meetings with the U.S. Secretary of Commerce. They won't listen. And they think they can make Europeans look small. That's not going to happen."

Getting at that same idea in her news conference, Malmström said, "When they say, 'America First,' we say, 'Europe United.' "