Accessibility links
Trump Picks Fight With The Eagles; Philadelphia Takes It From There : The Two-Way The White House says "only a tiny handful" of Eagles players agreed to come to D.C., causing Trump to cancel their visit. The fallout includes many accusations — and an apology from Fox News. 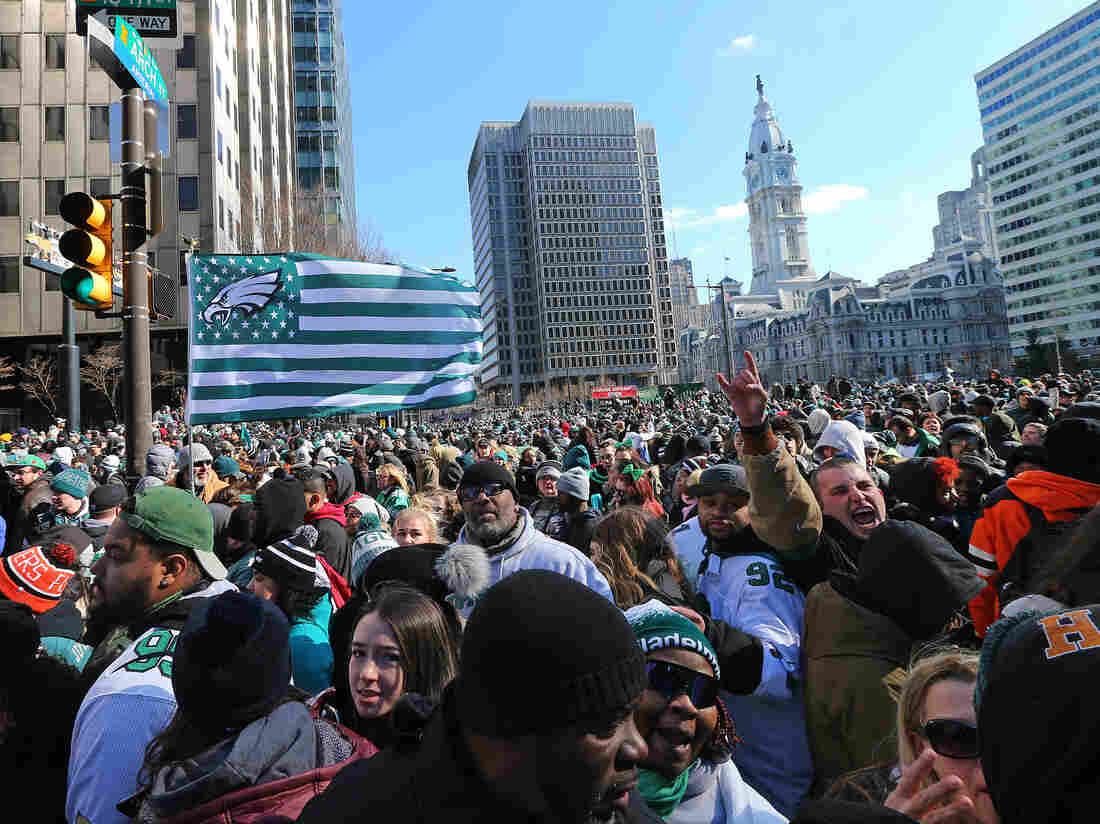 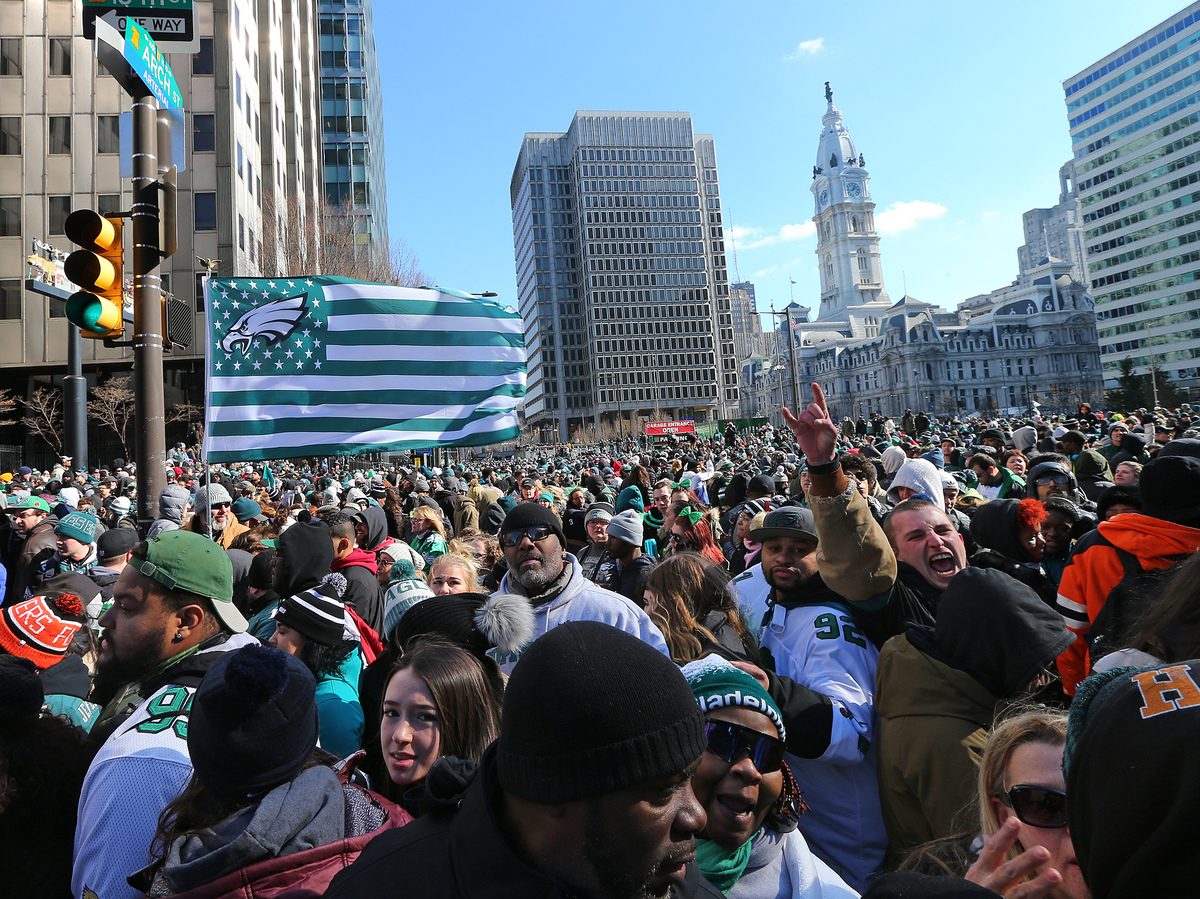 After President Trump cast aspersions on the Super Bowl champion Philadelphia Eagles and disinvited them from a White House celebration, the fallout has been wide-ranging and swift — from Philadelphia's mayor questioning Trump's patriotism to Fox News apologizing for implying Eagles players had taken a knee during the national anthem.

The acrimony continued Tuesday, when the White House said "the vast majority of the Eagles team decided to abandon their fans."

Christopher Wallace, the executive producer of FOX News @ Night with Shannon Bream, said the network erred during a broadcast Monday night when it used footage of Eagles players kneeling during a segment about the cancellation, implying that the players had taken a knee during the anthem last season — an act that players on other NFL teams have said is meant to protest police violence and racial inequality. The players were apparently praying.

Wallace said in a statement released by Fox News on Tuesday that "To clarify, no members of the team knelt in protest during the national anthem throughout regular or post-season last year. We apologize for the error."

Wallace's apology came hours after Eagles tight end Zach Ertz quoted a Fox News tweet to say via Twitter, "This can't be serious.... Praying before games with my teammates, well before the anthem, is being used for your propaganda?! Just sad, I feel like you guys should have to be better than this."

This can’t be serious.... Praying before games with my teammates, well before the anthem, is being used for your propaganda?! Just sad, I feel like you guys should have to be better than this... https://t.co/kYeyH2zXdK

Fox News has since deleted that original tweet. Hours before Wallace issued his public apology, the account for the network's Fox & Friends show — a Trump favorite — tweeted several mentions of a purported "anthem dispute," including one from co-host Brian Kilmeade in which he chided the Eagles and said, "Public sides with Anthem & Patriotism."

Hey @Eagles ...next time come to White House and have a conversation with @realDonaldTrump rather then a boycott..Public sides with Anthem & Patriotism over @NfL pays the price @foxandfriends what do I u think?

An Eagles contingent had been scheduled to visit Trump in Washington on Tuesday – but the White House released a statement from Trump that abruptly canceled the event last night, blaming the NFL team for sending "a smaller delegation" and, with Trump referring to himself in the third person, stating:

"They disagree with their President because he insists that they proudly stand for the National Anthem, hand on heart, in honor of the great men and women of our military and the people of our country."

As has been widely reported, the only Eagles player who took a knee during the anthem last year did so during the preseason — and that player, cornerback Ron Brooks, was cut from the team before the season began.

Eagles fans could still come to the White House, Trump said after the cancellation, adding "I will be there at 3:00 p.m. with the United States Marine Band and the United States Army Chorus to celebrate America."

In a tweet Tuesday morning, Trump said "We will proudly be playing the National Anthem and other wonderful music celebrating our Country."

The White House cancellation came after months of reports that only a small number of people in the Eagles organization were willing to make the trip to Washington — something that seems to have rankled the president and prompted him to target the Eagles in his not-infrequent discussions of player protests in the NFL.

Philadelphia's fans and teams aren't known for backing down from a fight. The city's mayor, Democrat Jim Kenney, responded to Trump's remarks with pointed words of his own, saying, "I'm proud of the Eagles on & off the field. Our players represent the diversity of our nation — a nation where we're free to express our opinions."

Kennney released a statement that reads in part:

"Disinviting them from the White House only proves that our President is not a true patriot, but a fragile egomaniac obsessed with crowd size and afraid of the embarrassment of throwing a party to which no one wants to attend."

Kenney's chief of staff, Jane Slusser, tweeted a taunt aimed at Trump, saying, "Our party was bigger than yours" — referring to the much discussed size of Trump's inauguration crowd.

Our party was bigger than yours #FlyEaglesFly pic.twitter.com/HIZk8xnJF1

Wide receiver Torrey Smith, who was on the championship team, said on Twitter that Trump's statement contains "So many lies."

Smith, who will play for the Carolina Panthers in the upcoming season, continued:

"Here are some facts 1. Not many people were going to go 2. No one refused to go simply because Trump 'insists' folks stand for the anthem 3. The President continues to spread the false narrative that players are anti military."

Smith also noted that his father served more than 20 years in the Army, saying he fought for Americans' right to protest peacefully. In another, he said Trump's decision was a letdown for those who support him.

"There are a lot of people on the team that have plenty of different views," Smith said of the Eagles' Super Bowl squad. "The men and women that wanted to go should've been able to go. It's a cowardly act to cancel the celebration because the majority of the people don't want to see you. To make it about the anthem is foolish."

Smith also retweeted a quote attributed to him by The Nation's sports editor, Dave Zirin, in which he explained months ago why he wouldn't be going to the White House.

Philadelphia Eagles wise receiver Torrey Smith said in February that most of his teammates wouldn’t go to the White House. Here was his reason. Sounds about right. pic.twitter.com/12vyVBn1LB

In that quote, Smith said his decision was based on how he views Trump's treatment of women and minorities, using a hypothetical example of a person inviting him to a party. Smith added that if "this individual also called my peers and my friends SOBs, you would understand why I wouldn't want to go to that party. Why is it any different when the person has title of president of the United States?"

In an attempt to regain control of the narrative, the White House issued a new statement around midday on Tuesday, depicting a back-and-forth with the Eagles organization.

"Unfortunately, the Eagles offered to send only a tiny handful of representatives, while making clear that the great majority of players would not attend the event, despite planning to be in D.C. today," White House press secretary Sarah Sanders said. "In other words, the vast majority of the Eagles team decided to abandon their fans."

The Eagles players who were to be in Washington, D.C., had planned to take part in several events with young fans. The NFL Players Association says those events were canceled when the White House rescinded its invitation.

The Eagles issued a statement on Monday night that did not mention Trump by name, instead noting its achievement and looking forward to the upcoming season:

"It has been incredibly thrilling to celebrate our first Super Bowl Championship. Watching the entire Eagles community come together has been an inspiration. We are truly grateful for all of the support we have received and we are looking forward to continuing our preparations for the 2018 season."

After being granted an unexpected day off, the Eagles arranged to hold a practice on Tuesday.