Accessibility links
The Nader This Time : The Visible Man What do you do when those pesky peaceniks come around to your house long after dark, ringing the doorbell, wanting you to sign a petition to save the spotted salamander or something? If you're anything like me, you dial up your private security co...

The Nader This Time

The Nader This Time

What do you do when those pesky peaceniks come around to your house long after dark, ringing the doorbell, wanting you to sign a petition to save the spotted salamander or something? If you're anything like me, you dial up your private security company, grab a bowl of cheddar cheese popcorn and wait for the fun that only independent contractors with badges can deliver. 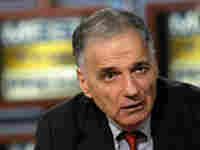 I kinda felt that way — the desire to call private security to escort away a late-arriving interloping do-gooder — when Ralph Nader declared he was going to run for president once again. Ralph — 0.38 percent of the popular vote in '04 — Nader.

Even Mike Huckabee must be like: Dude, you don't have a chance.

Be it as a write-in, a Green Party candidate or an independent, there's something very "hit the panic button" about the cocktail of Ralph Nader seeking the "Highest Office in the Land." I can feel my internal early warning system going off, cautioning that we're about to get hit with a tsunami of self-indulgence. How else to describe his candidacy?

Yeah, in his lifetime Nader has done good work. But he's also done little to get involved in the political process except to hit the scene once every four years and try to take the top prize. There are other offices, other positions, other ways to engage and guide the system. Nader's shown zero desire to do anything but show up to the big dance and try to score the hottest chick.

This would be, by the way, his fourth or fifth try for the White House, depending on how you score a run. But with four or five runs and no wins, it's pretty much like the Buffalo Bills' Super Bowl record. It therefore makes for interesting conversation when trading stories at the Baccarat table, but is otherwise unimpressive.

Nader, who turns 74 this week — even John McCain must be like: dude, you're too old — has devolved into trivia. A throwback to the Pat Paulsen sideshow candidate era. Not to be confused with the Ron Paul sideshow candidate era. The only thing new Nader's added to the process this quadrennial is the miraculous ability to unite the ire of Senators Obama and Clinton. Obama saying of Nader: "My sense is that Mr. Nader is somebody who, if you don't listen and adopt all of his policies, thinks you're not substantive." Clinton weighing in by saying: "I remember when he ran before. It didn't turn out very well for anybody — especially our country."

Hey, Mr. Nader. You got the two of them together. Chalk that up as your moment, and then go away. In case you need any assistance, I got my finger on speed dial.