Accessibility links
Could Ayers Blow Up in Obama's Face? : The Visible Man The Rev. Jeremiah Wright nontroversy? Not a problem.

Could Ayers Blow Up in Obama's Face?

Could Ayers Blow Up in Obama's Face? 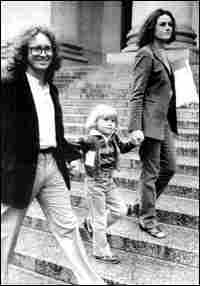 In this 1982 file photo, Bill Ayers, a former member of the Weather Underground, walks with his wife, Bernardine Dohrn, and their 4-year-old son, Zayd Dohrn, outside Federal Court in New York. David Handschuh/AP hide caption

The Rev. Jeremiah Wright nontroversy? Not a problem.

But come November, the Bill Ayers issue rushing up in Barack Obama's rearview mirror could be a real political problem.

A former member of the Weather Underground organization — a radical group responsible for a string of bombings in the early '70s — Ayers was a privileged kid turned domestic terrorist. Reformed and respectable, Ayers is now an education professor at the University of Illinois at Chicago, an informal adviser to Chicago's mayor and a past contributor to an Obama campaign. In Wednesday's debate, Hillary Clinton gave a preview of what to expect from conservatives come the general election should Obama take the nomination: accusations that Obama is cozy with radical liberals. There's not much the Clinton machine can do with the accusation, seeing as President Bill Clinton commuted the prison sentences of a couple of Weather Underground members.

Conservatives will try to do considerably worse, and they'll have a lot to work with.

Back in the day, Ayers was a radicalized liberal in the worst way. Not merely because he and his comrades turned to indiscriminate violence, but because of the reason they turned. Chiefly, their paternalistic belief that blacks could not secure civil rights without their helping, explosive hand to guide them. "Black people have been fighting almost alone for years," read the first communique of the Weather Underground. "We've known that our job is to lead white kids into armed revolution."

Going metaphorically arm-in-arm with Dr. King — as innumerable liberal-minded folks of all persuasions did — was not enough for the Weather Underground. They had to blow stuff up. And they did it without regard for the fact that they were essentially spitting on the memory of a man who was committed to nonviolence. Yes, they were partially radicalized by the killing of Black Panther leader Fred Hampton at the hands of the Chicago police. But many vented their very righteous anger without lighting fuses. But many, also, didn't fancy themselves modern John Browns leading otherwise helpless blacks to freedom.

The Weather Underground claimed to want to avoid human suffering. But you can't express yourself with explosives without somebody getting hurt. And the people who got hurt were three of its members, blown up in an accident so tragic it's actually empty of irony.

But I'm sure at the time the Weather Underground figured they were doing something noble.

And I'm sure Ted Kaczynski figured he was doing the same.

The issue, though, isn't what Ayers thought then; it's what he thinks now.

Read Ayers' memoir, Fugitive Days, which was published — in actual horrific irony — on Sept. 10, 2001. Though I have to admit it's pretty well written, it's filled with more paternalism ("A squad of cops in Cleveland had dragged Black men from a motel and shot them down in cold blood, and now we would, I thought, even the score.") and romanticism of what were ultimately terrorist acts. Ayers was also quoted in 2001 saying that he has no regrets for his past actions, but rather he feels that "we didn't do enough." Take a gander at his Web site and see if you find contrition or self-aggrandizement.

What someone did 40 years ago — within reason — should not damn that person forever. But that's assuming offending individuals pay their debt to society and repent. Ayers has done neither.

I genuinely hope Obama's got as much distance as humanly possible between himself and Ayers, and that Ayers is just, as Obama said in the debate, "a guy who lives in my neighborhood."