Accessibility links
How Bad is 'Uppity'? : The Visible Man Awhile back I wrote a piece about Karl Rove referring to Barack Obama as "arrogant" and asserted that when the Roves of the world use that word around Oba

How Bad is 'Uppity'?

How Bad is 'Uppity'? 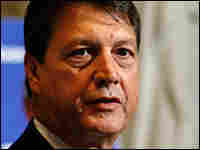 Awhile back I wrote a piece about Karl Rove referring to Barack Obama as "arrogant" and asserted that when the Roves of the world use that word around Obama, what they really mean is "uppity."

As to be expected, there were those who've never had to decode codification who took the stance that sometimes arrogant just means arrogant.

Be that as it may, the arrogant/uppity debate is now moot, as there seems to be a spate of folks quitting the euphemisms altogether and going straight for the pejorative. Over the few last weeks, we've had U.S. Rep. Lynn Westmoreland, a Georgia Republican, refer to the Obamas — both Barack and Michelle — as uppity, and had Rick Goddard, a GOP congressional candidate in Georgia, use the same word to describe MSNBC reporter Ron Allen. Goddard used the word in reference to a slightly testy interview Allen conducted with Newt Gingrich at the bastion of diversity that was the Republican National Convention.

The word "uppity" has a long and ugly history, and was usually part of a two-word phrase that roughly ran: "uppity n*gger."

Of course, now that the word is out there, uppity's got its defenders, too. They say that since it can be directed toward anyone of any race, it can't be offensive exclusively to people of color. Except, really, how many times do you hear the word used in conjunction with a white person? White people are supposed to have ego and ambition, so they can't possibly be uppity. It's minorities who have the temerity to want to rise above their station.

And it's journalists of color who have the nerve to ask conservatives tough questions.

Though unapologetic for the use of the word, Westmoreland says he didn't know that uppity had an offensive connotation. A difficult claim to believe coming from a 58-year-old man who grew up in the segregated South. I'm reminded of Jesse Jackson's dismay when he was informed that it's inappropriate to refer to New York City as "Hymietown." Who'd have thought?

Westmoreland's final fallback position is the same as most who refuse to either man up and apologize or just get honest and admit they're bigoted: Webster's. Westmoreland says that because there is a dictionary definition for "uppity," people's sensitivity to the word is overdone.

I would point out there are also dictionary definitions for "coon" and "tar baby" and "macaca."

And there is also a dictionary definition for "cracker." So I'm sure neither Westmoreland nor Goddard would take offense if I refer to them as one.