Assigned Seats At The Economic Advisory Board Meeting

Assigned Seats At The Economic Advisory Board Meeting

While we wait for Obama's first press conference as President-elect...his press office emails this "seating chart" from the meeting with the Transition Economic Advisory Board. 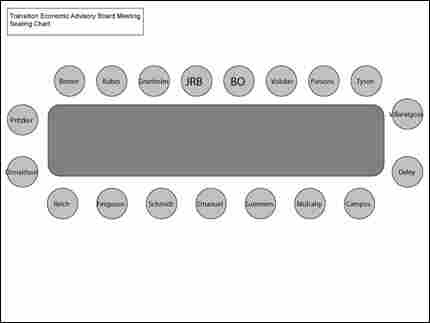 Our Thomas Pierce points out that the phone-bridge for Warren Buffet is missing from the picture. How are we supposed to tea-leaf his relative influence without it?!

UPDATE: Standing order during the presser is after the jump.

From Right to Left:

Roger Ferguson - President and CEO, TIAA-CREF and former Vice Chairman of the Board of Governors of the Federal Reserve

Richard Parsons - Chairman of the Board, Time Warner