Accessibility links
We Eat A Very, Very, Very Expensive Burger. : Wait Wait ... Don't Tell Me! For this week's Sandwich Monday, we eat the ridiculous "$777 Burger" at the Paris Casino in Las Vegas. It costs $777. 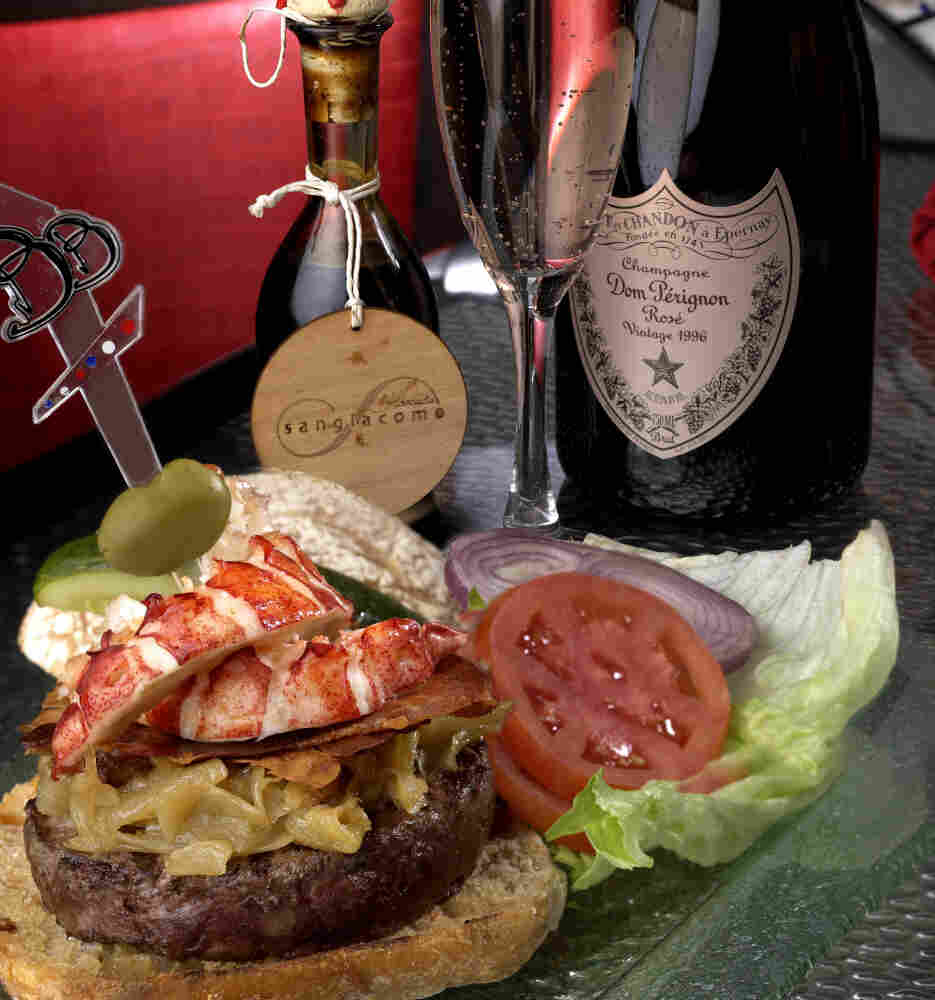 The 777 Burger at the Paris Casino is called the 777 Burger because it is a burger that costs $777.00. It's cost-prohibitive-licious! When I asked if we could try one for Sandwich Monday, they sent me a list of Talking Points about the burger. This is the first sandwich we have ever tried that has Talking Points.

Let me make clear we didn't pay for this sandwich. No, we got one thanks to a long Vegas tradition of getting things comped, and I may or may not have made a deal that has Carl performing as a showgirl to work off our debts.

We were joined by Hannah Allen of the Paris, who says most of the people who order this just hit it big in the Casino. 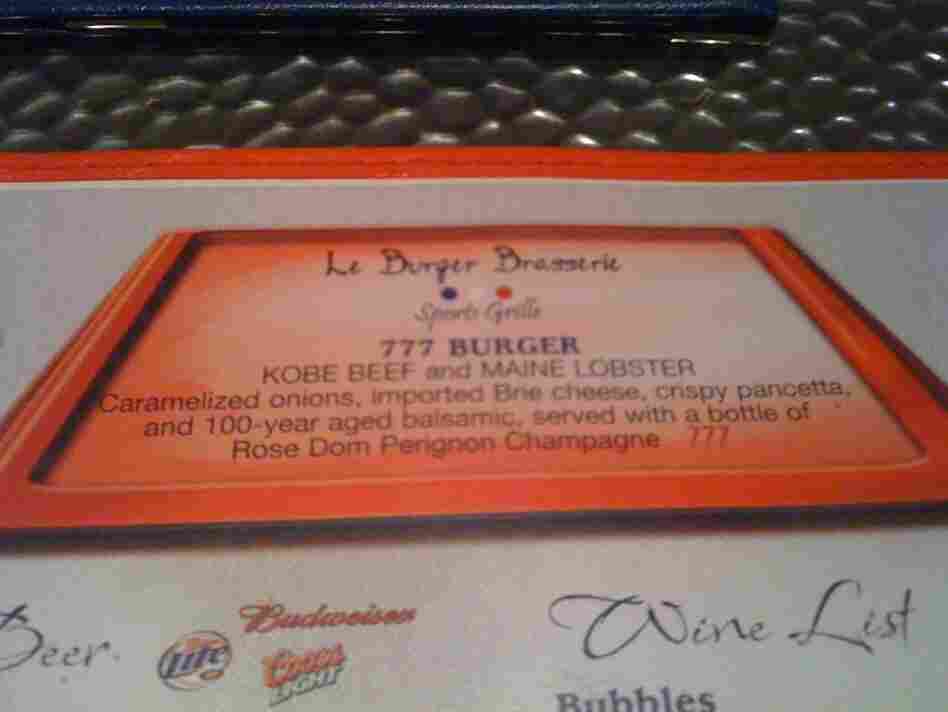 We passed on the Dom. NPR hide caption

Mike: This may compete with the KFC Double Down for Most Ridiculous Sandwich.

Ian: What you need to do is replace the bun with two Bentleys.

Eva: The Happy Meal version comes with a Bentley. 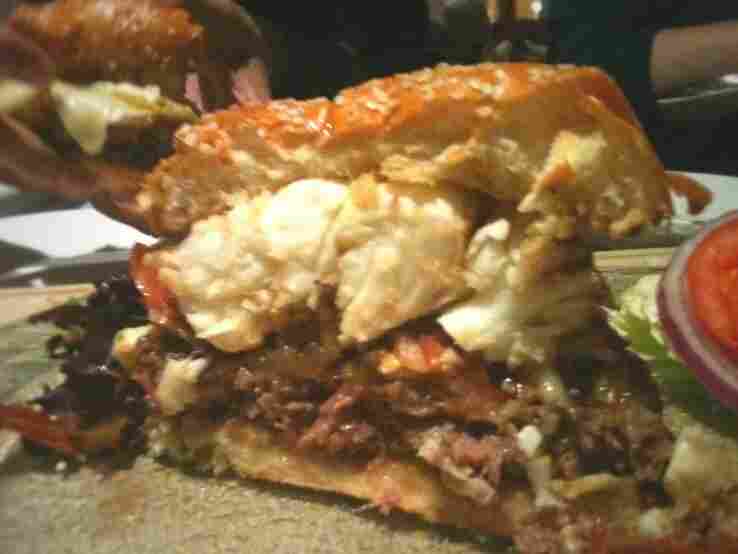 Peter: I don't know about the lobster. It seems like it's only there to make the sandwich more expensive.

Ian: I believe they steam it in a jacuzzi, so it dies luxuriously. 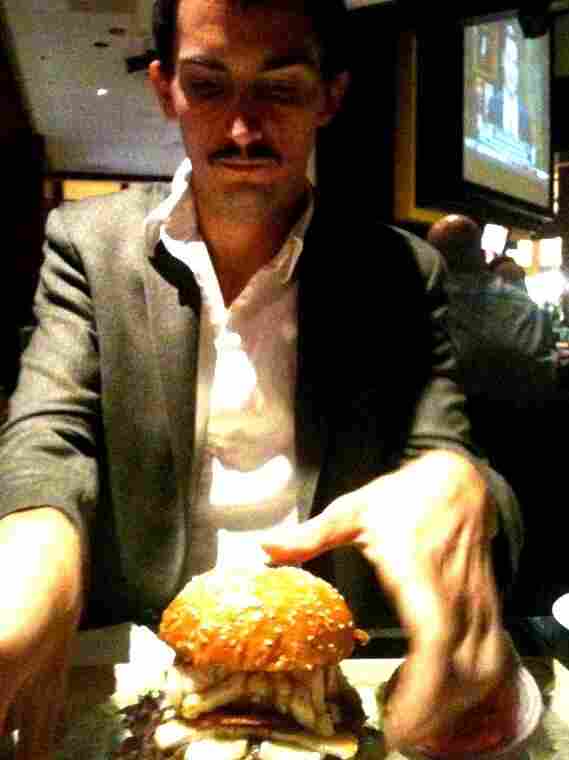 Eva: $777 wouldn't be that expensive, if you just ate a little bit of it every day and that was all you had for the year.

Ian: But why doesn't it come with a tiny little man to chew it for you? I feel ripped off.

Hannah: They should also give us some way to show off we just ate this. Like an "I Voted" sticker. 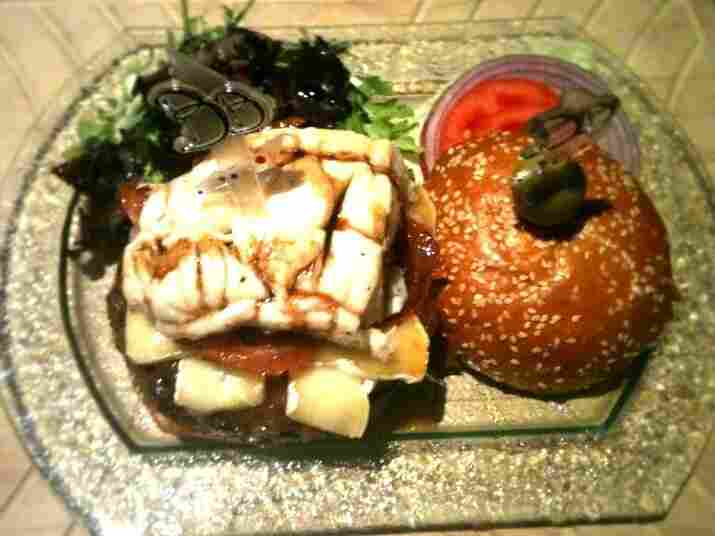 Peter: So is this Kobe Beef flown over from Japan?

Mike: It's actually Kobe Bryant meat. That's why it's so expensive. 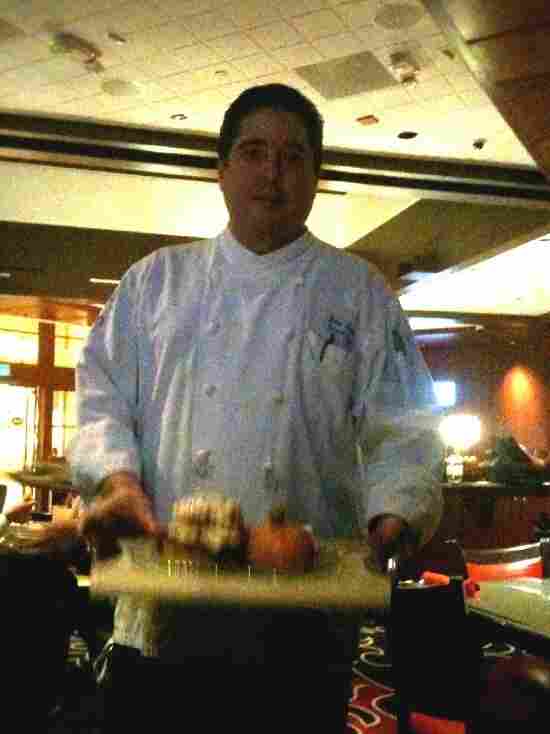 When you order a $700 cheeseburger, the chef brings it out to you himself. NPR hide caption

Peter: I just think I'd prefer to eat the burger and lobster serially.

Ian: Oh, I thought you were saying you wanted to eat burger and lobster cereal.

Mike: They have that, you know.

[The verdict: it really does taste expensive. Some of us felt that the lobster overwhelmed the burger a bit, so it was more a lobster sandwich with beef, rather than the other way around. Still, delicious.]