Accessibility links
A Specter Retrospective: Will The Senate Now Miss Its 'Great Survivor'? : It's All Politics Analysis: Arlen Specter outlasted a decade of defeats before coming to Congress and stayed afloat through big wave elections over the years. But while he may be remembered for longevity, in the Senate he was known for making things happen.

A Specter Retrospective: Will The Senate Now Miss Its 'Great Survivor'?

A Specter Retrospective: Will The Senate Now Miss Its 'Great Survivor'? 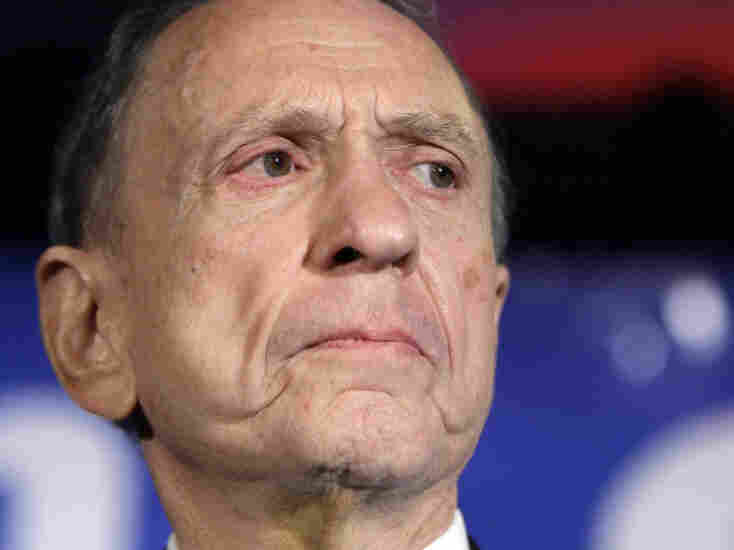 That's how Rep. Joe Sestak referred to five-term Sen. Arlen Specter two days before beating him in Pennsylvania's Democratic primary for the U.S. Senate.  Some found this in poor taste, given that the 80-year-old incumbent has survived a cardiac bypass and two kinds of cancer.

Sestak insisted he used the prison parlance for an inmate on the way to execution only in reference to Specter's career and brand of politics.  In that sense, the phrase was apt indeed.  Beyond that, Specter in the campaign's final week looked very much like a man about to lose by 8 points in a contest he had led by as much as 20.

Specter usually wears his age and health history remarkably well.  But in recent days he has shown signs of strain and exhaustion, and on primary night he seemed almost disoriented.  He had seen the polls and felt the immense momentum shift.  He surely knew the likelihood of his defeat.  Yet the look in his eyes still seemed like disbelief.

The Senate's great survivor, Specter outlasted a decade of defeats before ever coming to Congress and stayed afloat through big wave elections from one decade to the next thereafter.  Sometimes squeaking by in primaries, sometimes barely winning in November, Specter was always finding a way to come back.

But not this time.  And in finally succumbing, he became Exhibit A in the case against incumbents in 2010.

Specter was far better known nationally than Robert Bennett, the Utah Republican refused a spot on the primary ballot this spring, or Blanche Lincoln, the Arkansas Democrat who has been forced into a runoff primary next month.  His defeat eclipses the departures of incumbent Democratic senators such as Chris Dodd in Connecticut and Byron Dorgan of North Dakota and Evan Bayh of Indiana -- all of whom retired rather than face the wrath of voters this fall.

Unless John McCain manages to lose his Senate primary in Arizona later this year, Specter is likely to remain the man who symbolizes 2010, the year the voters got mad at the Senate.  In this political season, five terms of slavish service to your state may mean nothing at all.  A lifetime of darting back and forth across the center line to stay close to the swing voter is not sufficient.  A mastery of the political arts can be used against you.

A year ago Specter made what appeared to be a brilliant maneuver to save himself once again, executing a one-man realignment of the Senate.  Not only did Specter avoid near-certain defeat by hard-line conservative Pat Toomey in the GOP primary, he made his move early enough to create the first 60-vote majority in the Senate in a generation.  That won him the gratitude of the White House and the Democratic leadership in Washington and Pennsylvania.  They all backed his re-election.

But this week, what had been a stroke of genius became the central indictment of the incumbent by his challenger, Sestak, a two-term representative who had been dismissed as out of his league.  Sestak's killer ad, the most potent of the political year to date, showed Specter back in his not-so-distant Republican days, cavorting on the political stage with President George W. Bush and former Alaska Gov. Sarah Palin.  Every kind word Bush said cut Specter like a knife.

And then there was the ad's marvelous summation: "Arlen Specter switched parties to save one job ... HIS, not yours."

Tired of politics as usual and politicians as we know them?  Vote against Specter.

Sestak has yet to show much flair as a campaigner, and he will have his hands full this fall with Toomey and the populist surge on the right.  But he was astute in refusing to step aside for the party-switcher, sensing that in 2010 the 30-year winning streak of this remarkable political animal could be brought to an end.

And the word remarkable scarcely covers it.  The Specter career began in Russell, Kan., the hometown of former Sen. Bob Dole, and went from there to the University of Pennsylvania in 1947.  He served in the Air Force, went to Yale Law School and returned to Philly to practice.  He first touched important national issues as a staffer for the Warren Commission, investigating the assassination of President John F. Kennedy.

Originally a Democrat, Specter made a calculated move to the GOP. That was the best way up in an era when Republicans dominated statewide elections in the Keystone State.

His own ascent was anything but smooth. He lost a bid for mayor in 1967 and was ousted as district attorney in 1973. He ran for the Senate in 1976 and for governor in 1978, losing in the Republican primary both times.  But he was not deterred.  In 1980, he won narrow upset victories in the primary and the general election, becoming part of the new Republican Senate under newly elected President Ronald Reagan.

Since then, Specter has been noticed mostly at moments when he was interrogating someone, such as Anita Hill, the witness against Supreme Court nominee Clarence Thomas in the Judiciary Committee hearings of 1991. Those hearings led to the "Year of the Woman" election of 1992, but Specter escaped being one of the victims, defeating a female challenger by 3 percentage points.

But while Specter may be remembered for his longevity and tenacity, he will be missed in the Senate itself for his practicality.  What may be called opportunism in electoral politics functions as pragmatics in the process of legislating.  Specter was good at it.  He could be maddeningly lawyerly in a hearing or an interview, but his forensic skills were of great value when applied to the inside negotiating of a legislative deal.

The idea of compromise is not in vogue in this historical moment.  The energy is coming from those filled with righteous certainty.  But the mechanisms of compromise remain central to the actual business of Congress -- especially in the Senate.  Specter could make things happen.  Without him, it is doubtful the Obama administration could have had either its stimulus package or its health care law.

On issues great and small, Specter was usually part of the outcome.  And without at least a few senators like him, it may be impossible for the Senate to produce any outcomes at all.